As promised, Google has introduced a native YouTube app for iPhone. We had previously reported that Apple will be removing the dedicated YouTube app from iOS 6 which is due to be released in the near future. At the time, Google promised that a native iOS app was in the works. YouTube had previously been one of the built-in iOS apps since the original iPhone launch.

The app just appeared in the App Store as a free download: 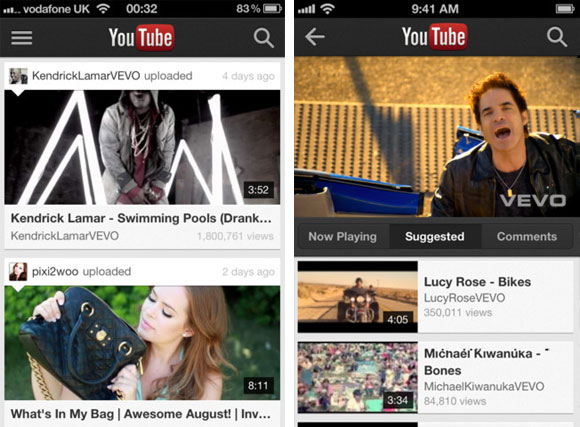 The YouTube blog outlines some of the new features:

- Tens of thousands more videos: Watch official music videos like Taylor's latest hit.
- New YouTube channel guide: Swipe your finger from the left edge of the screen to reveal a guide with your subscribed channels on YouTube, giving you instant access to everything from Alli Sports to YOMYOMF.
- Find awesome videos faster: Get to videos like "Gangnam Style" faster with new search tools that give suggestions while you type, and let you sort through videos or channels. Flip through related videos, comments and more info, all while watching a video.
- More ways to share with the people you love: Share that incredible video you found on YouTube on Google+, Facebook or text message in the app, as well as from Twitter and email.
Click to expand...

The app does not yet natively support the iPad, but the NY Times reports that a native iPad app is in the works.

In order to provide mobile users with the "tens of thousands" of new videos, the app now supports display of ads with videos. Previously, these videos were unavailable on iOS due to the previous lack of support for ads.

For the first time in a native iOS experience, YouTube will show pre-roll adds ahead of its mobile videos. That's the bad news.

The good news is that with more monetization comes more content. Thanks to mobile ad capabilities baked into its own app, YouTube will unlock tens of thousands of music videos from VEVO and others that were not viewable on the old app.
Click to expand...

Very nice, indeed! I was skeptical at first but am now extremely happy that development is in the hands of Google. And we can share directly via SMS now!

Not in the UK store yet...any ideas when?

If we click on a Youtube link, will it open in the app or online? I guess we'll find out! I've been missing the app, actually. It will be nice to have a working Youtube player again.
J

fatboyslick said:
Not in the UK store yet...any ideas when?
Click to expand...

Not in Sweden either.

Json81 said:
Not in Sweden either.
Click to expand...

Nor Australia. Huh?
U

I managed to get it (UK) using the link in the story. Hoping a Google maps app makes its way out next!

This is the brilliance of modulated apps, Apple did the right thing removing the native app, let Google manage it and let it be independent of the OS, more apps should be like that(Newsstand for example)

This app is MUCH better than the Apple's YouTube app...

I really like how you can play videos in portrait straight from the page, like you can in the Android app, I wish it had a scrubbing feature though when seeking video.

Also you can finally copy video link to clipboard. Without having to use the "send email" workaround.

I just downloaded it... and it's amazing! fast, sleek, and very polished.
I can't wait for google to release their own Maps App, just for the sake of everyone shutting up.
Last edited: Sep 11, 2012
Z

Ads only for vevo right not for regular videos

Can't believe it's out so soon! I hope it serves as a viable replacement for the late YouTube app that originally shipped!

Just got it here in the UK this morning. Quite smart, does the job well.
L

It's so beautiful! I'm loving it. We get categories like my Android. Can't wait for tomorrow!
C

Only runs iPhone size on iPad

its in Australia downloading now, its a shame though i will miss the original icon
R

nice, got mine. seems to work well.
S

No, it still open in then native app as before. On iOS6 I guess that will change.

google prolly had this ready years ago

cRuNcHiE said:
It's not a universal binary. LAME! Runs as iPhone size on my iPad
Click to expand...

If you'd read the story you'd know that it's iPhone only at present and Google are working on the iPad native version.

mrmarts said:
its in Australia downloading now, its a shame though i will miss the original icon
Click to expand...