Chrome will improve "tab throttling" by better prioritizing active tabs and limiting resource drain from tabs open in the background. This is said to have a "dramatic impact on battery and performance." Google has reportedly been performing early tests on Mac laptops in particular.

"This is an ongoing investment in improvements to speed, performance and battery life," said Max Christoff, director of Chrome browser engineering. Chrome has previously been criticized for poor use of RAM, battery draining, and privacy concerns.

In May, Google set out plans to improve Chrome battery toll by blocking resource-heavy ads. Chrome will also limit the resources that an ad can use before the user interacts with it. In addition to this, Chrome will soon be updated with new optimization that will allow the most performance-critical parts of the software to run even faster.

Google is currently experimenting with the changes, with the intention of releasing the optimizations and improvements to Chrome in a stable release towards the end of August.

Good to hear. Chrome is essential for a lot of business web-apps as safari often falls short.
Reactions: Ian Howlett, GeoStructural, Shirasaki and 4 others

I only use Chrome when Safari fails. It’s painfully slow, drains enormous amounts of CPU, RAM and battery and it’s goog-ugly.
Last edited: Jul 12, 2020
Reactions: Predef, John.B, 370zulu and 59 others

They got scared by this 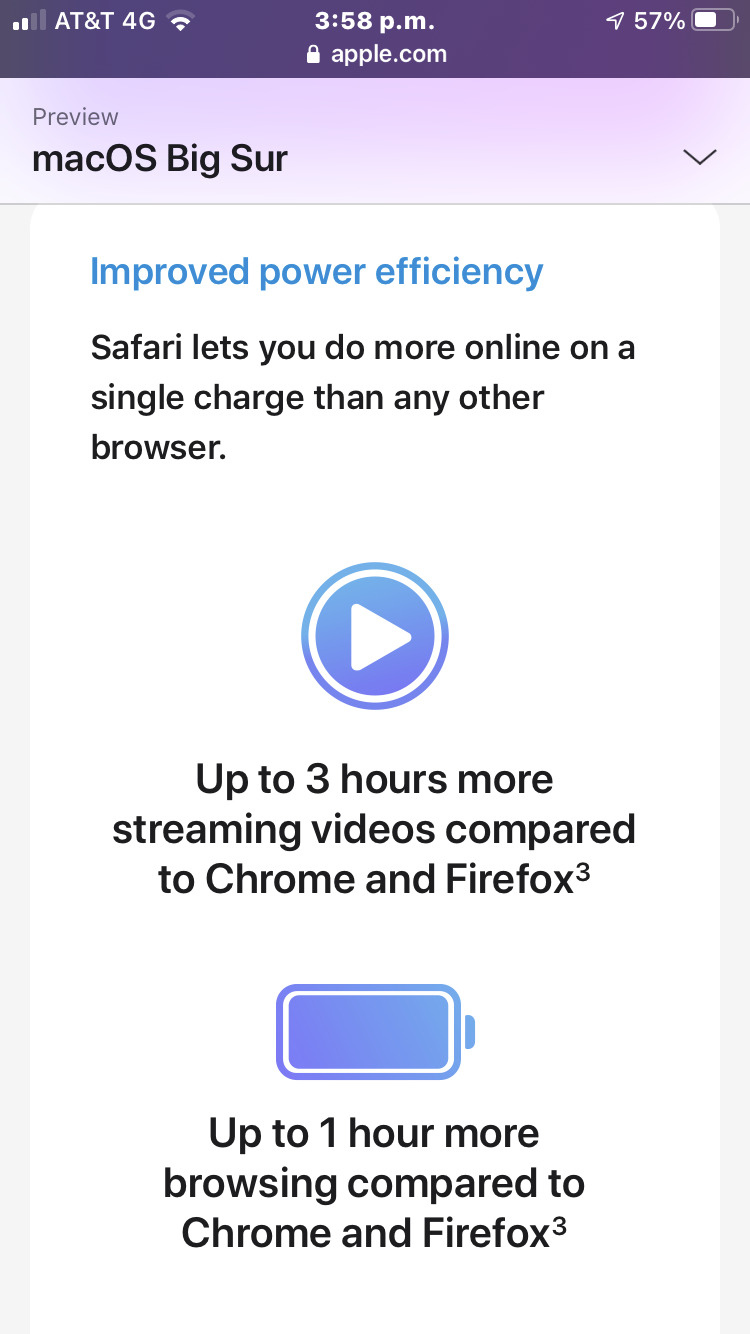 We’ve all heard this before. Let’s see if it actually happens.
Reactions: pianophile, t1meless1nf1n1t, AccenT and 26 others
M

Imagine how much computing power and electricity is wasted by Chrome every day.

Google can say they're green, but efficient software would save more energy than any single action google can do on a corporate level.

That should become a priority for everyone in computing.
Reactions: 3.14, stroemseth, BrandoCalrissian and 41 others

Use safari.
If you really need a chromium browser; Use Brave, it's Chrome without the Google spyware.
Reactions: Ian Howlett, 370zulu, dellaster and 46 others

It's also difficult to quantify how much additional energy is used because of its RAM consumption, since the kernel manages that. I typically use Safari.
Reactions: Lazy
T

Lol do people still use Chrome on Mac?
I abandoned that ship a long time ago...
Reactions: burgerrecords, ImaxGuy, t1meless1nf1n1t and 24 others

if the new safari is good in big sur, i will move from google chrome, but the previous safari gave me problems with watching on youtube and twitch.
Reactions: Ian Howlett, motulist and Jony Ive and Co.

I know a lot of people say ‘just use Safari’ but one of the best and most important features of Chrome for me is multiple accounts and syncing. I have my personal Chrome, business accounts and even my partners account for quick access for her. Rather than having to constantly log out/re login on various websites I can just switch to a different Chrome account without closing or effecting my other account etc.
Reactions: alex cochez, sideshowuniqueuser, Shirasaki and 6 others

And I will still never install it. I use Firefox most of the time and Safari when on battery.
Reactions: BulkSlash, bousozoku, lockhartt and 6 others
C

Considering Google apparently prides itself on selecting the highest quality candidates as their employees, I would love to know how it can possibly be improved and if it can, why it wasn't done years ago.
Reactions: Ian Howlett, John.B, t1meless1nf1n1t and 9 others

Netscape ftw ? Safari mostly but some sites don't play nice. I use Brave for them.
Reactions: t1meless1nf1n1t, jprmercado and Böhme417
H

I do web development and Chrome developer tools is way ahead of everyone else so I’m stuck with Chrome; so this is a good news if it actually happens.
Reactions: GeoStructural, motulist, MEJHarrison and 3 others
C

I only use Chrome to watch Netflix/Hulu/Prime on my MacBook Air when using an external monitor. Unfortunately on safari these services with DMR only work on build in monitors.

I wish Safari added support for Widevine DMR Like Chrome and FF. So DMR can work in external monitors.
Reactions: bernuli and JosephAW

WBRacing said:
Considering Google apparently prides itself on selecting the highest quality candidates as their employees, I would love to know how it can possibly be improved and if it can, why it wasn't done years ago.
Click to expand...

Remember Google's business is selling advertisements, collecting data, and generating clicks. This is prioritized above everything else. They know what they are doing, and do that very well.

That's why I don't use Chrome.
Reactions: Ian Howlett, ImaxGuy, t1meless1nf1n1t and 18 others

As above, Safari’s developer tools are improving, but they’re still clunky and painful to use compared with Chrome’s dev-tools.

Which is funny, since they both started as the WebKit inspector, but Apple actually made them *worse* over time.

It’s too bad, but the poor dev-tools in Safari means I’m stuck with Chrome too. Glad they’re working on improving things like battery life though! and maybe someday Safari’s dev-tools will catch up too.
Reactions: nickgovier and bwintx

So it's primarily suspending background tabs? What if one wants to play Spotify via one tab in the background while surfing with another tab in the foreground? Still prefer Chrome over Safari to avoid exploits like this one that led to kernel-level code execution.

sotov said:
Remember Google's business is selling advertisements, collecting data, and generating clicks. This is prioritized above everything else. They know what they are doing, and do that very well.

That's why I don't use Chrome.
Click to expand...

It'll also dramatically improve the data Google is collecting. Can you imagine that 68% of the world is browsing the web using a tool made by a company whose entire purpose it is to track people, sell that data to advertisers who in turn sell things to you. No wonder Google is so huge. I'll stick with Safari and Duck Duck Go.
Reactions: Ian Howlett, kryptosis, justperry and 15 others

Safari is all I need. Especially with the new translation feature. Means I have 0 reasons to use that Spyware/Chrome again.
Reactions: t1meless1nf1n1t, boswald, DinkThifferent and 2 others

I actually swapped over to Microsoft Edge. I have a 2011 Macbook Pro 15" 16GB ram and 2GHz i7.and it works really good.
It doesnt chew up battery, CPU or Ram. Havent had issues with some pages like Safari does.
Has solid features and its a browser made possible by the Chromium open source project.

Chrome was very slow on my ageing machine but found less errors running some sites. Chrome would zap battery and heat the hardware up and before I knew it fans are running hard.
Safari was ok but load times were average and load site errors on some pages Been using Edge for 12 months and has been a good solid browser and I never thought I would say that.
Reactions: thejadedmonkey, Böhme417 and Agent OrangeZ
N