Apple on Tuesday finally released the MagSafe Duo Charger, which is a $129 charger that combines an iPhone 12 MagSafe charger with an Apple Watch charging puck.


Subscribe to the MacRumors YouTube channel for more videos.​
We picked up one of the new MagSafe Duo chargers to see if it's worth Apple's super high asking price.

Apple first introduced the MagSafe Duo alongside the new iPhone 12 models in October, but until its surprise release on Tuesday, there was no word on when it would come out. It's available from the Apple online store now, and also some retail stores in the United States. 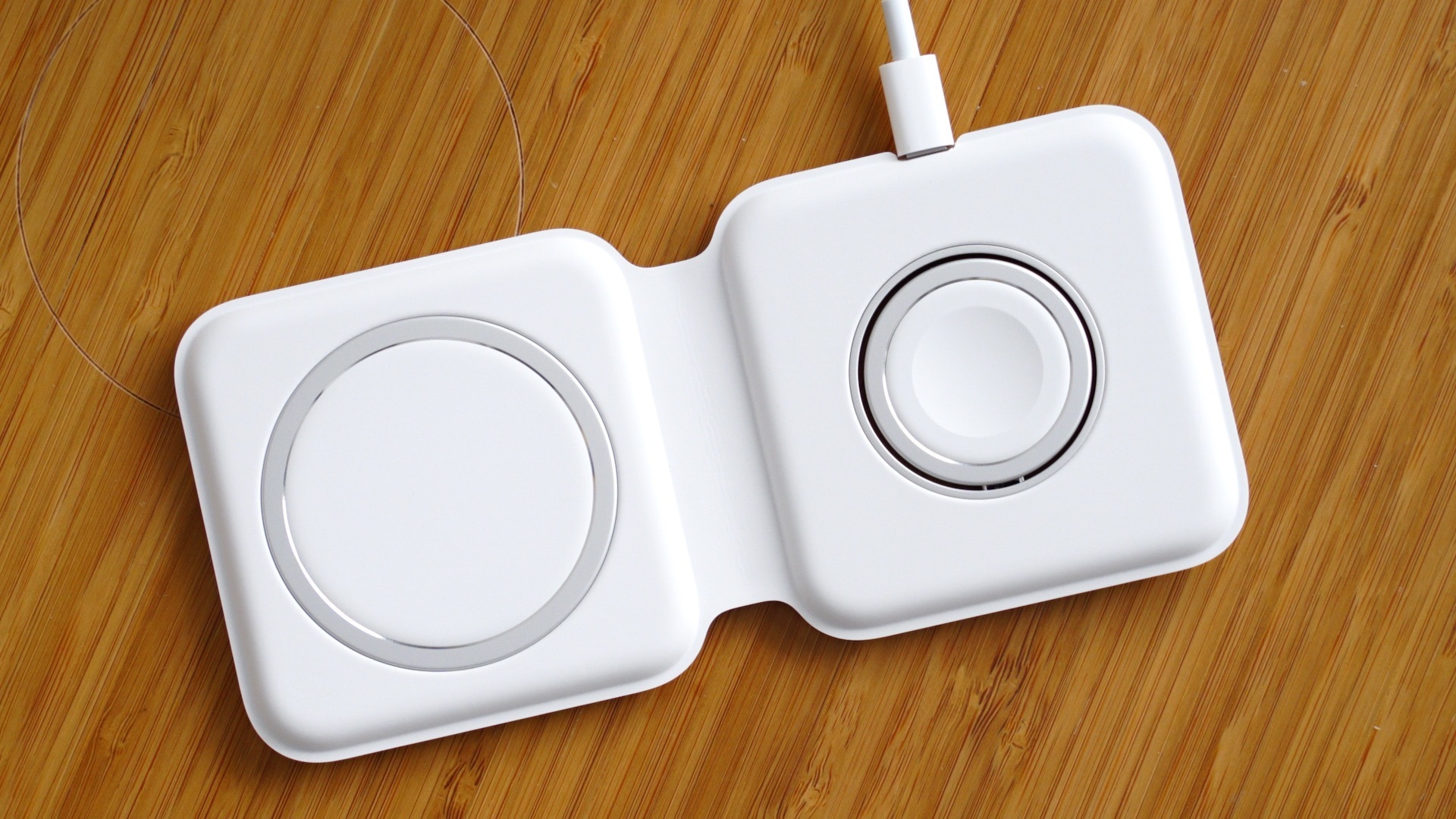 The MagSafe Duo is made from a white material with a book-style design. One half has a MagSafe charger that attaches magnetically to iPhone 12 models, while the other half has an Apple Watch charging puck. The Apple Watch charging puck can be used flat or it can pop up so you can charge the Apple Watch in Nightstand mode, but the MagSafe charger remains flat. The design is simple and clean, and it folds over neatly, something that will be great for future travel. 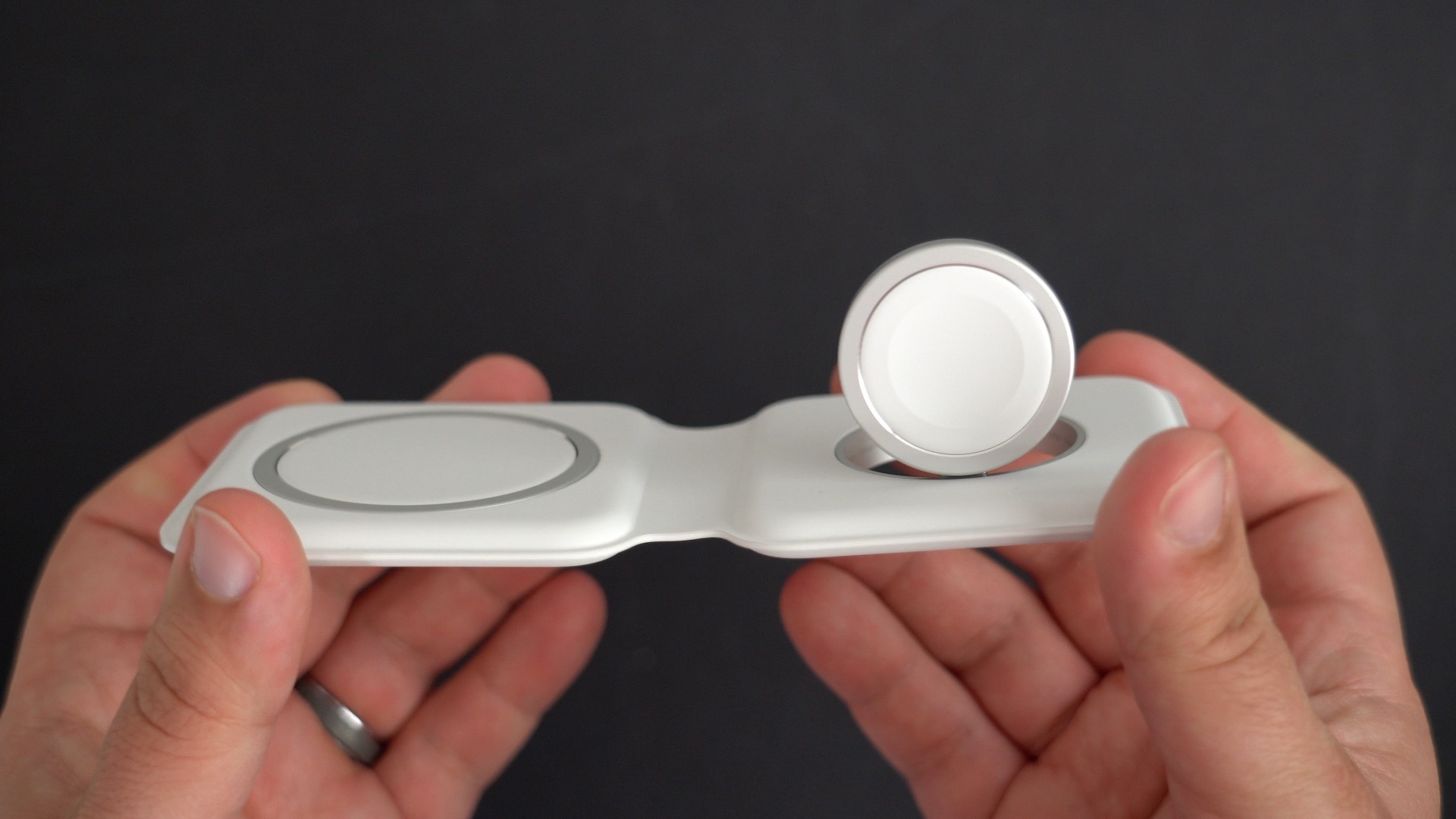 On the surface, the MagSafe Duo looks like a decent charging option, but at its price point, there are compromises to be aware of. It does not ship with a power adapter so you need to purchase one or use one that you already own, and there are charging limitations. 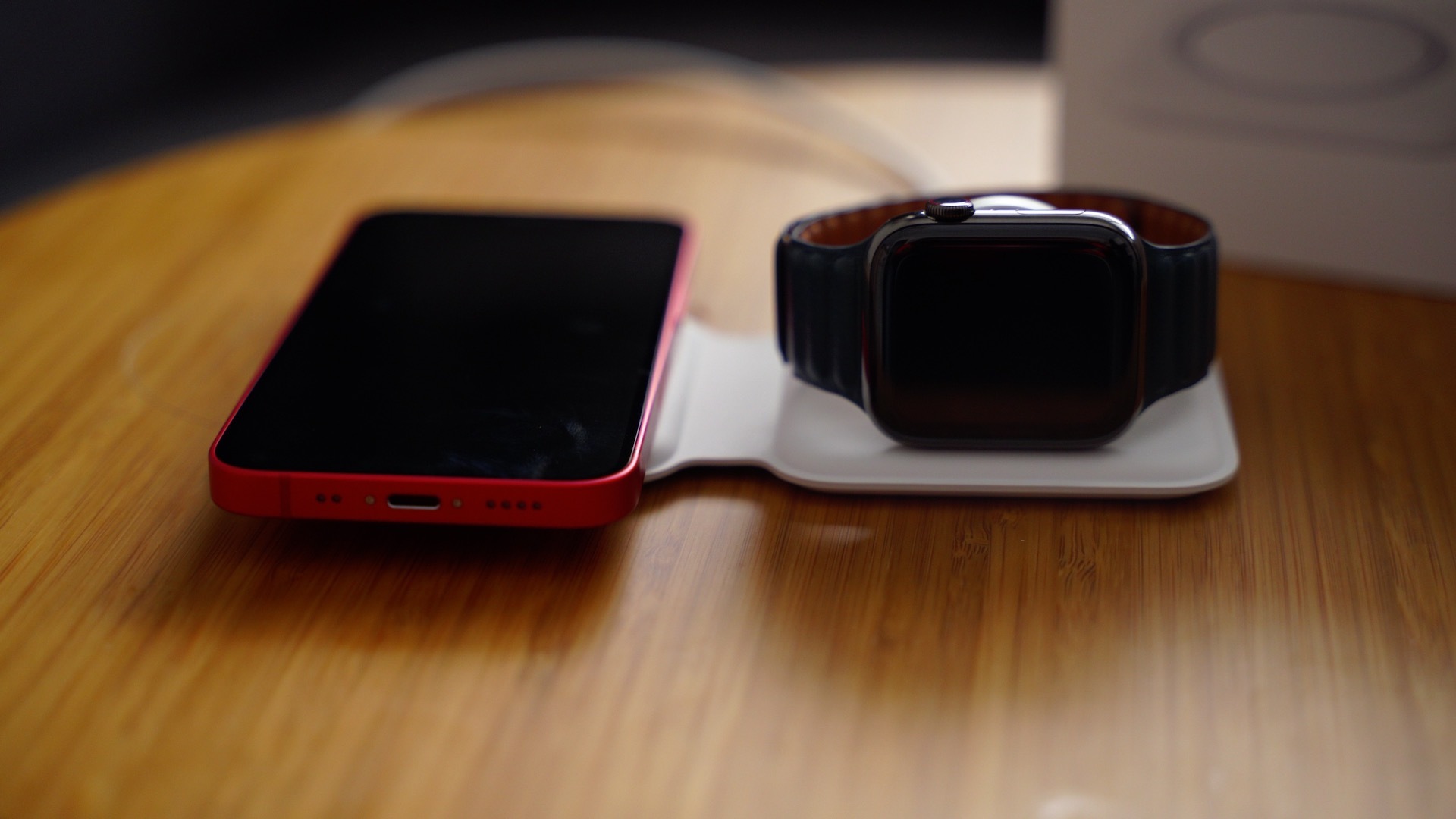 The MagSafe Charger on its own can charge an iPhone 12 at up to 15W with Apple's 20W USB-C charger, but if you use that same 20W USB-C charger with the MagSafe Duo, an iPhone 12 will be limited to a maximum of 11W. You can use a 27W+ charger instead and it will charge at up to 14W, but it is not able to hit that 15W maximum. Apple's 20W USB-C Power Adapter costs $19, and the 30W version is $49, so adding on a charger raises the cost of the MagSafe Duo quite a bit.

There have also been some MagSafe Charger charging limitations with certain power adapters that are PD 3.0 compatible, and that may also be a concern with the MagSafe Duo. 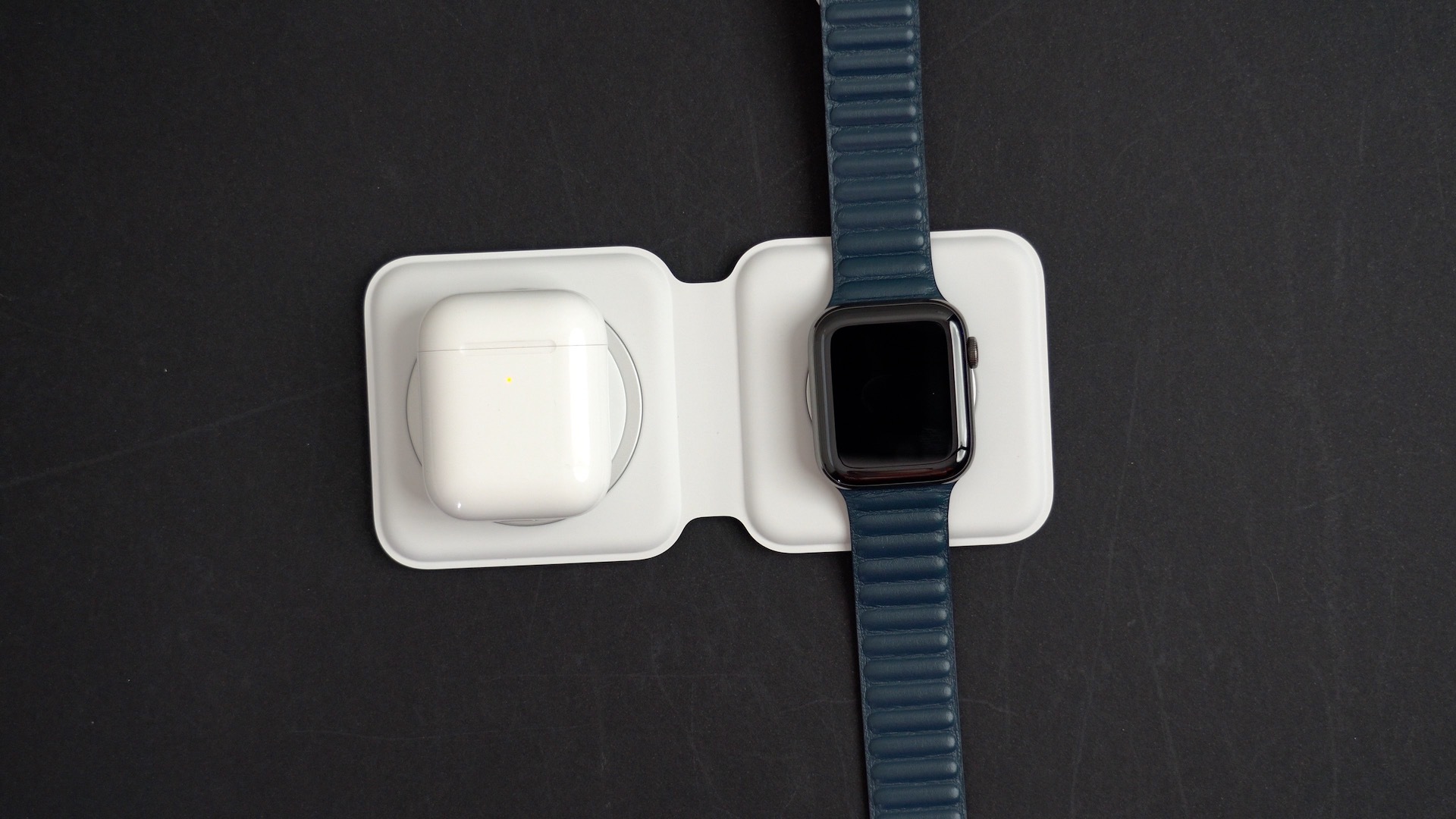 At the $129 price point, the MagSafe Duo really should have come with a power adapter rather than just a USB-C to Lightning cable. A standalone Apple Watch charging puck is $29 and a MagSafe Charger is $39 for a total of $68, but Apple is charging close to twice that to connect them together. 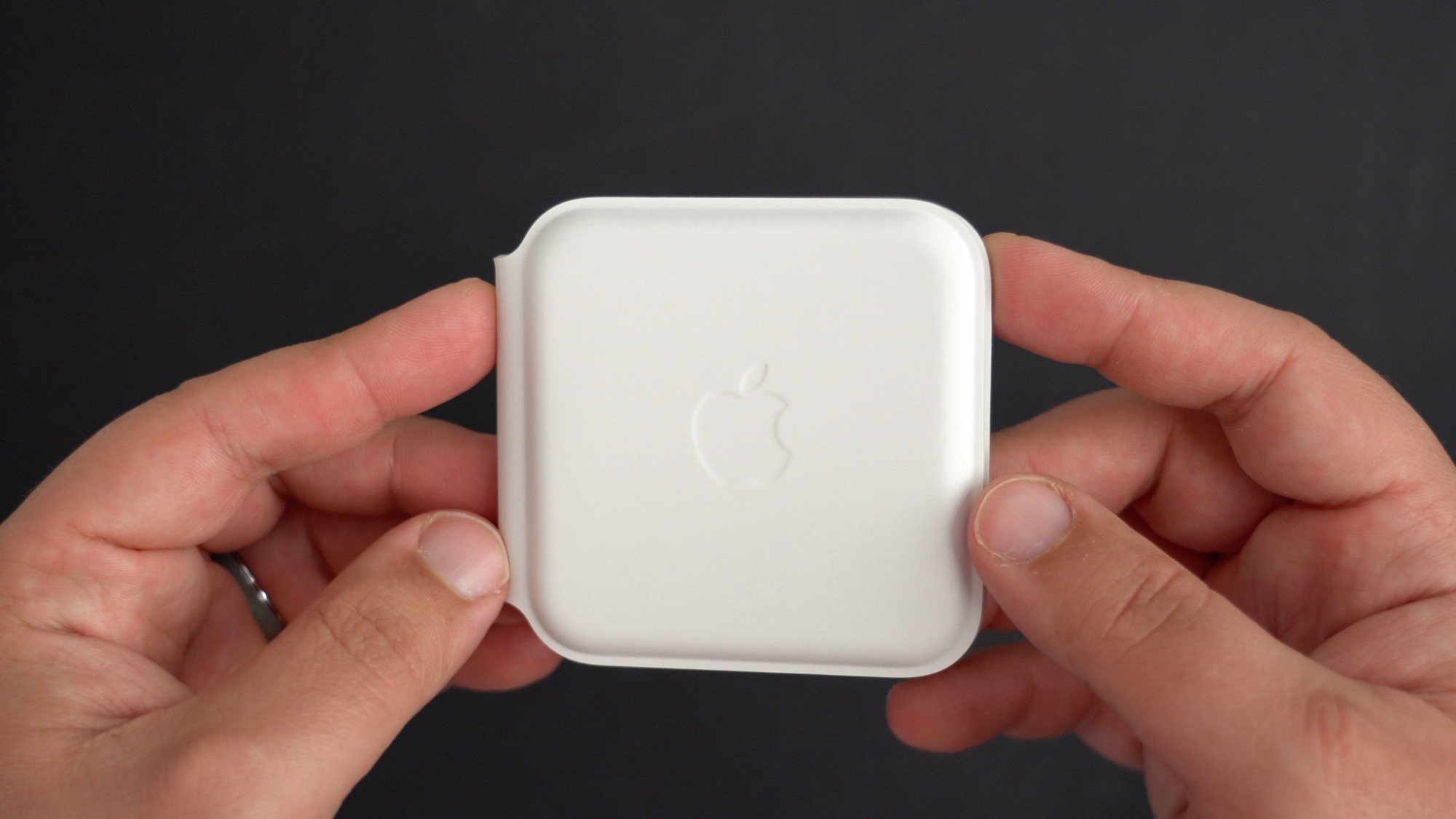 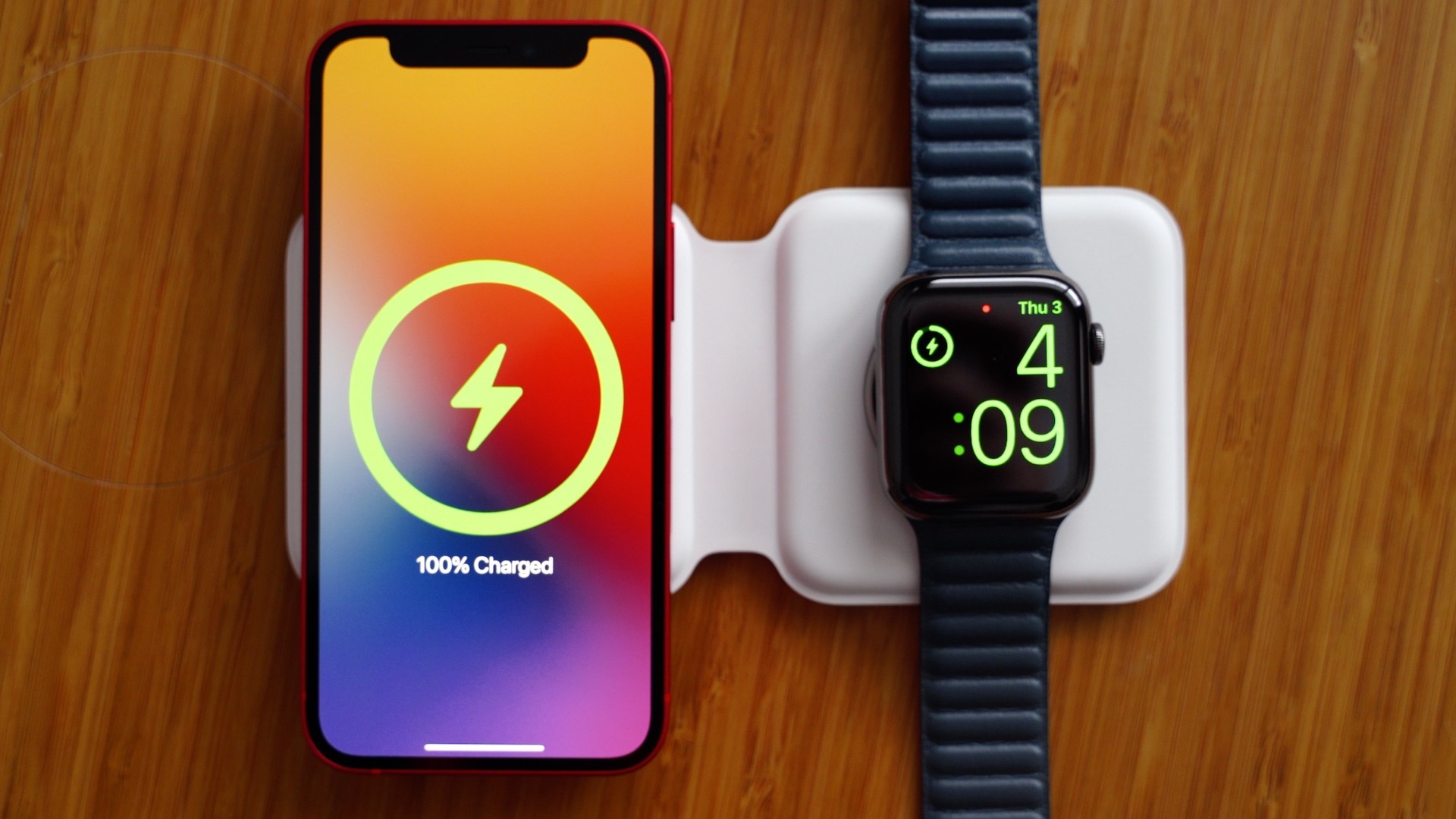 So who should buy this? Apple fans who have an Apple Watch and an iPhone 12 and who plan to travel often will likely find the MagSafe Duo useful, but it's not a must-have accessory nor is it any kind of deal, which is worth keeping in mind. We recommend waiting to see what kind of third-party accessories come out in the next few months.

The fact when you pick up your phone it brings up the charger and chargers slower means it isn’t worth it
Reactions: ModusOperandi, Oblivious.Robot, sam67uk and 29 others
J

oh my, you're in for trouble ... just kidding, Thanks for posting and reporting on it.
Will this become one of the weekly giveaways? just asking ...
Reactions: SuperCachetes and TheDailyApple
M

Think i will be waiting for a clone for this one. Or the Belkin stand (which is not portable but very nice looking)
Reactions: ModusOperandi, SashJ, whatgift and 6 others

Yeah this is an odd product from Apple, and expensive even for them. More importantly I feel like wireless technology is not matured yet, so at 129 dollars I really question the longevity of this. Will the iPhone 13 have a 'faster' wireless charger available? Will the rumored newly designed watch next Fall support the same charger? Too many questions to commit when there are literally similar products available for 30 bucks.
Reactions: koolmagicguy, JonnyBlaze, MrFootery and 9 others
F

Kylo83 said:
The fact when you pick up your phone it brings up the charger and chargers slower means it isn’t worth it
Click to expand...

you're complaining about it being 1W slower...guaranteed you won't notice the difference.
Reactions: ModusOperandi, Skoal, Amon Ra and 8 others
L

OK, someone explain this to me.
The magsafe duo has a lightning port on it, and you plug that in to the duo, then you drop your phone on the duo while you’re sleeping.
The charging speed of your phone doesn’t matter, because you’re sleeping, and as long as it’s charged when you wake up, it should be fine.
If you absolutely need a quick boost of power, just unplug the lightning cable from the duo, and plug it directly into your phone. Then, you get the full 20 W speed, and your phone can be charged super quickly.
I don’t understand this whole hemming and Hawing over the fact that it only gets to 11 W instead of 14 W with a 20 W brick. First of all, as someone who has used the regular magsafe, it rarely gets to that theoretical 15 W. Your phone has to be extremely cool, and almost dead to actually be charging at full speed.
The second that your phone starts to heat up, it instantly lowers down to somewhere between nine and 12 W.
If you start using your phone while it’s charging on the regular MagSafe, it goes even slower.
Basically what I’m saying is, if you’re planning on buying this product, don’t worry about charging speed. As long as you use the 20 W brick, it will be fine.
And in Zollo tech’s review, he used the old 18 W brick with it, and it got up to 10.7 W. So really, as long as you’re using the 18 W brick, you should be fine.
If you absolutely need fast charging, then you shouldn’t be using a wireless charger, or just unplug the lightning from the duo, and plug it directly into your phone for a quick boost.
Reactions: TDKUK, Alachuabeachgirl, daveathall and 33 others

PSA: I haven’t been able to get MagSafe charging working at all with Apple’s own 29w power adapter. But a 18w Anker one I have works just fine.
Reactions: ModusOperandi, Olympics, Lazy and 3 others
P

I have to say, I really liked the idea of this when they first showed it, and I really like the design and simplicity of it.

It just feels like this was meant as a travel charger or something, but with COVID they didn’t want to talk about it in that regard this year.

Would have loved if it was a bit bigger and sturdier for true bedside charging.
Reactions: Kram Sacul, dtshaw82, G5isAlive and 5 others

Cool product, but even if it included a power brick it'd be $50 too expensive.
Reactions: ModusOperandi, ocva, Oblivious.Robot and 24 others
C

I think I’ll wait until Nomad comes out with an alternative.
Reactions: Traverse, hirsthirst and AirunJae
U

Lounge vibes 05 said:
I don’t understand this whole hemming and Hawing over the fact that it only gets to 11 W instead of 14 W with a 20 W brick.
Click to expand...

TheDailyApple said:
I think I’ll wait until Nomad comes out with an alternative.
Click to expand...

I hope Nomad makes a smart little lightning bearing battery that snaps onto it in some way.

Yeah... this is a hard pass for me until the price drops significantly. I already have two standalone Apple Watch chargers that are just fine - I still really don't feel like I need the convenience of a MagSafe "puck" charger for my iPhone 12 Pro. Maybe if it came with a 30W USB C adapter it would be a little more reasonable.
Reactions: 28Gauge, SqlInjection, decypher44 and 2 others

Kylo83 said:
The fact when you pick up your phone it brings up the charger and chargers slower means it isn’t worth it
Click to expand...

You can pick it up as normal no issues
Reactions: Skoal, G5isAlive, tridley68 and 5 others

With the charging brick, you are looking at around $160 before tax. That is a no go for me, even if I were buying into MagSafe burnt offering charging. I will stick with QI charging.
Reactions: TouchedByAl, Oblivious.Robot, mcdawg and 5 others

farewelwilliams said:
you're complaining about it being 1W slower...guaranteed you won't notice the difference.
Click to expand...

For the price is should be 15w I brought the normal MagSafe and double side tape and it stays on my desk
Reactions: Gusjasso, mazz0, Ghost31 and 2 others

This video is about 5 minutes and 45 seconds too long. 😜

For real though - the niche that it fills is nice, but is spending $129 really justifiable when the MagSafe charger is $39, most of us already have a USB-C charge brick, and our watches already came with their charge cables? I can't justify that extra $90, unless I wanted to flex my money in a very very weird fashion.
Reactions: Lazy and mcdawg
H

No matter how I see this, I cannot justify the price, which is more shocking, this, leather wallet or leather folio.....
Reactions: 28Gauge, Lazy, Racco151 and 1 other person

The Game 161 said:
You can pick it up as normal no issues
Click to expand...

No it picks up the charger
Reactions: DanTSX, Oblivious.Robot, Lazy and 5 others

Strangest product to come from apple since the iPod socks. At least those were only $29.
Reactions: DanTSX, Warputin, robbysibrahim and 10 others

If they had made it just a bit cheaper and included the charging brick, then it would be a definite buy for me, I need 4 of these to replace my families 4 Apple Watch Chargers and 4 iPhone chargers. 8 things in a travel bag get tangled so easy not matter how hard I try to for basic cord management.
Reactions: AirunJae, Trin813, Huck and 1 other person
F

the reason why Apple gave you a USB-C to lightning is because this product is meant for you to travel with it which means you stick the cable and the charger in your travel bag.

why they didn't give you a charging brick is because you have the option of using the 20W or the 30W. If they included the 30W, the price of the product goes up (due to the cost of the brick and as well as the product dimensions being larger). if they included the 20W, it would be cheaper, but people might end up buying the 30W to get the best experience, throwing away the 20W to ewaste potentially.

I’m imagining this device with an aluminum frame that matches the puck and MagSafe with a slick hinge. Include the necessary charging adapter and I’d be in. As is, nope, nope, nopity nope.
Reactions: Digital Dude, Lazy, mcdawg and 2 others
You must log in or register to reply here.
Share:
Facebook Twitter Reddit Email Share Link
Register on MacRumors! This sidebar will go away, and you'll see fewer ads.
Sign Up
Top Bottom