The Apple TV 4K is a fantastic little set-top box that has an easy-to-use interface, an App Store, and options to watch all kinds of content, but there's one major flaw with the device - the Siri Remote.

Apple unveiled its Siri (or Apple TV) Remote with touch surface in 2015 alongside the fourth-generation Apple TV, and it's never been a particularly popular accessory. With that in mind, Swiss company Salt created an alternative Apple TV Remote, which we managed to get our hands on.


Subscribe to the MacRumors YouTube channel for more videos.​
Salt is a Swiss telecommunications company that offers the Apple TV 4K in a broadband TV bundle for its customers. There's no way to order this remote in the United States or countries other than Switzerland - it's designed only for Salt customers.

According to Salt, the Salt Remote was designed in close collaboration with Apple after the Salt TV customer base complained about the poor usability of the default remote that comes with the Apple TV. 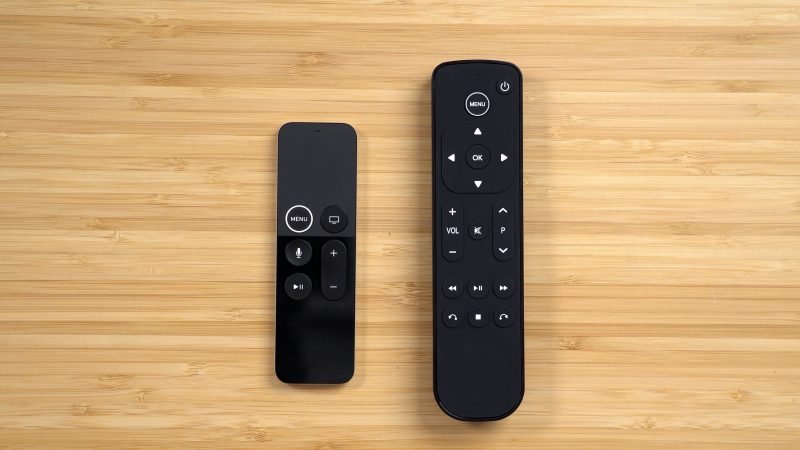 Available for just under 20 Swiss francs, the Salt Remote looks more like a traditional remote than Apple's version, and it's made from a simple black plastic with buttons for controlling multiple functions.

It is designed to connect to the Apple TV out of the box and requires no pairing to set up. It's both wider and longer than the Siri Remote, so it's harder to lose, which is probably a good thing for most people given how easy it is to misplace the Siri Remote.

Salt's remote features directional arrows for navigation purposes, volume controls, multiple media controls with play/pause, rewind, and fast forward, a mute button, a menu button, and a power button. All of the buttons are responsive and easy to use.

There is no microphone button for activating Siri because Siri is not an available Apple TV function on the Apple TV set-top boxes in Switzerland. Anyone who uses the current Apple TV remote with Siri for searching for content will definitely notice the lack of a Siri button. 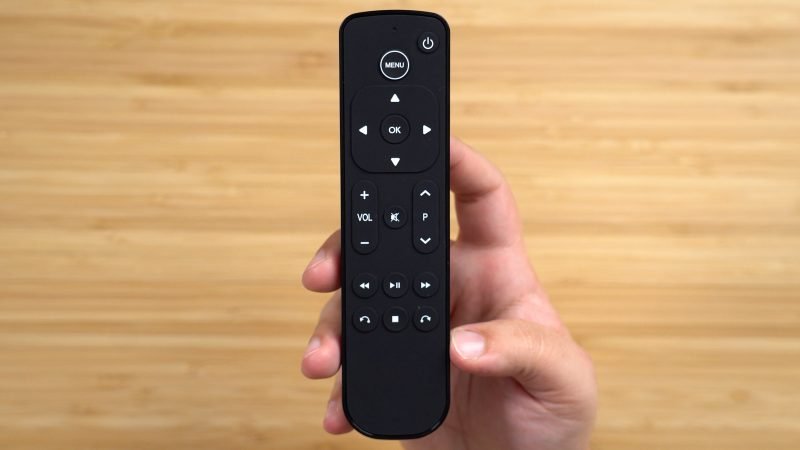 Given that this is an inexpensive remote option, it is powered with two triple A batteries that need to be replaced every six months on average, but that's a minor inconvenience.

All in all, the Salt Remote is clean, simple to use, and has no fiddly touch interface to deal with. Unfortunately, given that this is developed by a Swiss company, it is unlikely to come to the United States or other countries.

Apple may have allowed an alternative remote for one telecom, but it's doubtful that Apple would allow the Siri Remote to be replaced in all countries. It's possible that we could, however, see a new Siri Remote design at some point when Apple releases an updated Apple TV.

What do you think of the Salt Remote? Let us know in the comments.

Most TV remotes already work with Apple TV (but not Siri), so we're not missing anything that Salt is providing. Great point about closing out apps... Guess the perfect remote would be a taller version of the current Siri Remote with the old navigation keypad right below the touch pad.
Last edited: Dec 30, 2019
Reactions: ignatius345, travelsheep, Regbial and 7 others

I hope now that Ive is gone someone will wisen up and make a remote that doesn't suck.
Reactions: ignatius345, morningsong, Brien and 49 others

markaceto said:
Shut up and take my money!
Click to expand...

Just because Apple didn't "invent" it is no excuse; heck, just give the Salt company a fistful of dollars and license it at least; sell it as an overpriced accessory in the Apple Store. People will buy it.

Not all of Jony Ivie's designs are worthy of keeping around.... the butterfly keyboard, the trashcan Mac Pro, the MacBook with one USB-C port (!) .... sometimes you wonder if anyone at Apple actually tries any of their products outside of their UFO.
Reactions: ignatius345, kuebby, sfoalex and 13 others
E

Not having a dedicated home button was kind of dumb - but otherwise pretty nice. If they sold them internationally they'd make a bundle.

I think the biggest downside is that it uses IR instead of Bluetooth though. No thanks.

I would kill for an intelligently redesigned remote from Apple.
Reactions: SalisburySam, RalfTheDog, house13um and 7 others

Wonder if the codes for this will turn up in the Harmony remote database...
Reactions: chrixxa, steve09090, gotluck and 1 other person

I am not going to say I love the remote, but it’s not horrible either. I actually like the touch interface. I just wish it was a little larger and a little less sensitive.
Reactions: Morgenland, Edsel, ArtOfWarfare and 1 other person
A

I'd miss the Siri input too much. I use a Harmony remote for buttons but keep the Apple TV remote handy for talk-to-text in search fields. Add that to this remote and make it the standard remote in the next Apple TV refresh. Also add a rechargeable battery, I'd miss that too.
Reactions: turbineseaplane, DoctorTech and Blu-ray1972

I use a Logitech Harmony Elite. It has replaced all 5 of my remotes very successfully. Likely the last remote I'll ever (foreseeable future) need...
Reactions: house13um, gridlocked, compwiz1202 and 1 other person
W

Putting your TV in game mode can make a big difference with the crappy swiping on the Apple remote.
Reactions: George Dawes

agffth said:
I'd miss the Siri input too much. I use a Harmony remote for buttons but keep the Apple TV remote handy for talk-to-text in search fields. Add that to this remote and make it the standard remote in the next Apple TV refresh. Also add a rechargeable battery, I'd miss that too.
Click to expand...

A home button as well. Some of us use the home button to turn off our systems. Makes it easier than having to use multiple remotes to turn of the tv, sound bar, and put the Apple TV to sleep.
Reactions: Chaos215bar2 and DoctorTech

No Siri and no Home button aren't product killers for me, although I'd miss them some. If it was available here in the US for $20 I'd pick one up to try it as I too hate the current AppleTV remote.
Reactions: chrixxa and turbineseaplane
E

Blu-ray1972 said:
A home button as well. Some of us use the home button to turn off our systems. Makes it easier than having to use multiple remotes to turn of the tv, sound bar, and put the Apple TV to sleep.
Click to expand...

This remote has a dedicated power button which serves that purpose.
Reactions: Chaos215bar2, Sasparilla and decypher44

Bought my TV 4K this month. Just getting used to the new remote (quite different to the old slim remote on my 3rd gen model). No Siri (Ireland) but it does have voice search, which is useful. I don’t understand all the hate heaped on this remote (maybe my all-carpet apartment makes the glass top less of a concern?) but it’s early days...
Reactions: OUsooner08, SubaCherry and SDJim
T

Everyone needs to go "home" at some point.

However i dispute the fact this bigger remote is better, because it you don't loose the Siri remote, then the view changes.

In fact,anything 'smaller in size' can be used as "I loose it" when in reality it's just "putting it down, and dunno where it was prior"
Reactions: compwiz1202

I would love to have this remote to replace my Apple TV remote even though I would miss the Siri button for when I am searching for something. My #1 complaint with the current remote is that it is too symmetrical and I pick it up upside down at least half of the time because I am normally using it in a darkened room. My #2 complaint is that I frequently accidentally perform some function when picking up the remote because of the touchpad. I hope Apple gives us something close to this remote with the rumored new Apple TV mentioned in iOS 13.
Reactions: Morgenland, Mick-Mac and aviddk

Most TV remotes already work with Apple TV (but not Siri), so we're not missing anything that Salt is providing. Great point about closing out apps... Guess the perfect remote would be a taller version of the current Siri Remote with the old navigation keypad right below the touch pad.
Click to expand...

How do I pair my Samsung remote to work my Apple TV. Thanks
Reactions: Chaos215bar2, ArtOfWarfare and arn

I guess I'm one of the few people that uses the Remote app on my iPhone. It works better than the Apple TV remote and I don't have to worry about losing it in the couch cushions.
Reactions: BoricuaHec01, Edsel, sjjones and 6 others

I was super excited about this until I saw the limitations.

Why can’t somebody just make a version of this that still has a microphone with Siri and the normal Home button?

Why can’t frickin’ Apple just do this?

God this company is so bloody annoying.
Get over yourselves and make some stuff that is actually well designed for human usability.
Reactions: InfoTime, Chaos215bar2, heffsf and 10 others
A

DoctorTech said:
I hope Apple gives us something close to this remote with the rumored new Apple TV mentioned in iOS 13.
Click to expand...

It seems lately they have been giving the users what they are asking for so it's a possibility.
Reactions: DoctorTech and Tozovac
C

Ok so how can we get this in the USA ?
Reactions: InfoTime, RalfTheDog, chriswitt and 4 others
F

I keep an ATV3 remote alongside my Siri remote simply for the arrow buttons, because swiping through a long list of movies is a pain. With the ATV3 remote, I just have to hold down the button.

If they had only made the left & right edge act like the arrow buttons, allowing us to just hold them down.

Especially since Apple made swiping slower with tvOS 13.

(And why the heck is the Unwatched list still one long horizontal scroll? Put it 4-across like all the others and I would be so much happier, Apple.)
Reactions: Breaking Good