Hands-On With the Button Remote, a Siri Remote Alternative for Apple TV

4jasontv said:
You said you drop it, lose track of it, and that and animals jump on it. It doesn’t matter if some people do that. Those are not normal or reasonable use cases.

Why is it so hard for some people to recognize that the issue is their behavior? My whole point is that people have to spend money on a product that performs worse because they refuse to follow simple instruction and change behaviors that have undesirable outcomes.

Don’t sleep with your remote if it cause issues. Don’t turn the tv off until you placed the remote back and then you don’t have to do it in the dark. Unless of course you have one of those TVs that doesn’t use light to show images.
Click to expand...

You should read again. For comprehension this time. I didn’t say any of those things.

Didn‘t say anything about sleeping with the remote. I don’t know how cranked you have the brightness on your TV, but my rooms are pretty dark with just the light from the TV.

These posts are getting even more silly. People being triggered all because of Siri Remote alternatives. "Oh No!, someone doesn't like everything Apple designs!"


4jasontv said:
hose are not normal or reasonable use cases.
Click to expand...

Is dropping an iPhone by accident normal or reasonable use case? Do you complain on the forum that people need to adapt their behavior and stop dropping their iPhones instead of buying a protective case or Apple Care+?


4jasontv said:
Why is it so hard for some people to recognize that the issue is their behavior? My whole point is that people have to spend money on a product that performs worse because they refuse to follow simple instruction and change behaviors that have undesirable outcomes.
Click to expand...

Like a phone case? Or a Siri Remote case?

I don't like phone cases, and won't use them, but I won't knock anyone for spending money on a product that makes their phone perform worse because they refuse to follow simple instructions like not drop their phone.

Nothing wrong with adapting tech to ones' habits instead of changing one's lifestyle for each device they own.

Not sure why you have such an issue with what other people want to do with their tech and how they want to use it.


4jasontv said:
Don’t sleep with your remote if it cause issues. Don’t turn the tv off until you placed the remote back and then you don’t have to do it in the dark. Unless of course you have one of those TVs that doesn’t use light to show images.
Click to expand...

Or, they can use the tech they way they want to use them and get devices that better suites them the their habits.

patrickisfrench said:
exclusively for boomers, what the jitterbug provided when smart phones were too hard
Click to expand...

After a slight learning curve, my baby boomer parents got use to the Siri Remote. I would even say that they like it.

They are super slow with it, and troubling shooting their ATV with them over the phone can be pretty painful sometimes (man, I wished the ATV had remote management), but to my surprised, they use it.


When I helped them with cord cutting, I got them two ATV4K models for their main TVs, and two Amazon Firesticks for their bedroom TVs. Another bedroom has a Roku TV, so didn't need a streaming device.

My father told me that he hates using the Amazon Firestick's remote, and asked how much it would cost to get an ATV in his bedroom. After I told him the price and he quickly changed his mind, so I guess he doesn't like it enough to pay for an ATV.

TVreporter said:
Darn... for a fluttering second I thought it was a post of the new Apple TV.

This long wait has been painful.
Click to expand...

Lol. For video content, there isn't anything the current hardware can't do. All the limitations are software choices Apple has made. (Lossless bitstream, 24p versus 23.976, limited support for YouTube 4k, etc.) They seem unlikely to change those choices, even with new hardware, since they could change them with the current hardware if they wanted to.

That being said, if you use the ATV as a gaming console, there are new features they are likely to add in hardware to enhance that, in the rumored next gen. 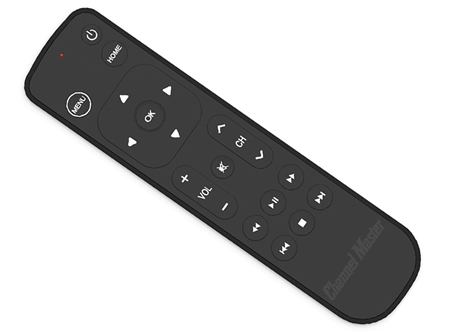 Thanks for sharing this, looks like a good option!

For those who like the original Apple TV remote, may I suggest you stop wasting your time and our time trolling people on a thread about alternative Apple TV remotes. I was really enjoying the first few pages of this thread with people who want to chat about an alternative remote. If you don’t want an alternative remote, that’s totally fine! Just go outside then! Go enjoy your Apple TV. Do something else with your life. Sheesh
N

I ordered 2 to begin with to replace my Harmony 650’s. If they work as I hope it’ll be simpler for my son and I’ll get 2 more.

Damn Harmony is always popping up with the help assistant which is a PIA or gets stuck on the Activity screen. If it were just me it would be fine but, I’m constantly helping him “undo” the wrong button pressed.
I just hope it will control my AppleTV, LG TV and Onkyo Receiver.

I just received one of the Salt remote (shipped from Switzerland). Not cheap but I'm at my wits end being thrown out of whatever program I'm watching by the Apple remote. As to packaging, appearance and look and feel: I think it's a class act.

I agree with some of the negatives of the Salt as described by others above. However, you can get Home by holding down the Menu or OK button. (Just got the unit so not positive which one.)

I paired the Salt Remote with a 2018 LGTV no problem. Unfortunately I use a Onkyo amplifier for sound. Amps and receivers are not supported.

As mentioned above, a BIG PLUS is that both the Apple Remote and Salt Remote are paired wth Apple TV and BOTH work at the same time.