It's iPhone launch day, which means the new iPhone 11, iPhone 11 Pro, and iPhone 11 Pro Max are now in the hands of customers.

We picked up a new iPhone 11 and an iPhone 11 Pro Max for an unboxing and quick first impressions overview to give MacRumors readers who are still considering a purchase or waiting on their new phone a look at the updated devices.


Subscribe to the MacRumors YouTube channel for more videos.​
Our iPhone 11 Pro Max is in midnight green, the popular new color that sold out within just a few minutes after preorders went live. Midnight green is greener on camera than it looks in real life, and in some lighting, it's quite similar to space gray.

This is the first new color Apple has introduced for its high-end iPhone in years, and it's a rather safe choice because of its subtlety. There's also a new matte finish on the Pro models, which gives them a frosted look. 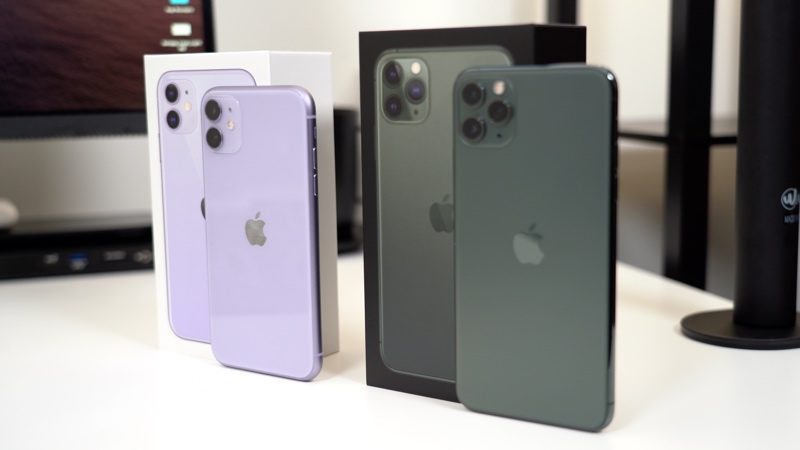 Apple introduced two new iPhone 11 colors this year: purple and green. Our iPhone 11 is the purple color, which is a soft lavender shade that's quite pretty. 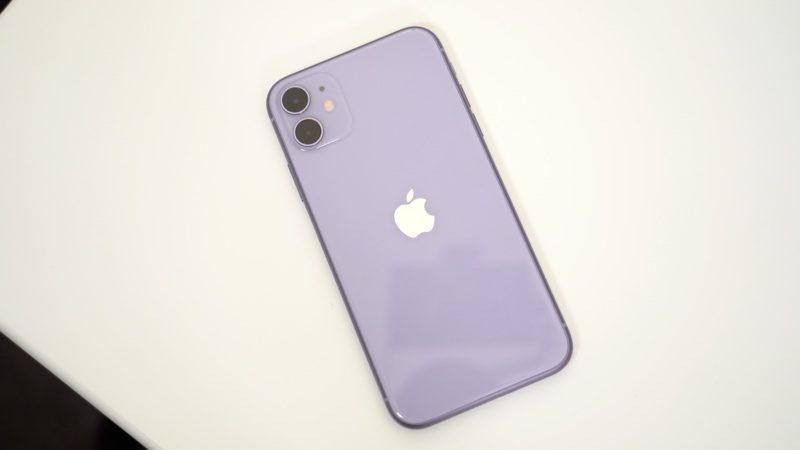 Unboxing the new iPhones is standard procedure and there's nothing that jumps out as new, but the iPhone 11 Pro Max (and the 11 Pro) come with a new 18W USB-C charger and a USB-C to Lightning cable instead of the traditional 5W charger.

With that new 18W cable, the iPhone 11 Pro and Pro Max support fast charging right out of the box. You can charge an iPhone 11 Pro or Pro Max to 50 percent in 30 minutes. The iPhone 11, of course, supports the same fast charging, but it still ships with a 5W charger and a standard USB-A to Lightning cable. 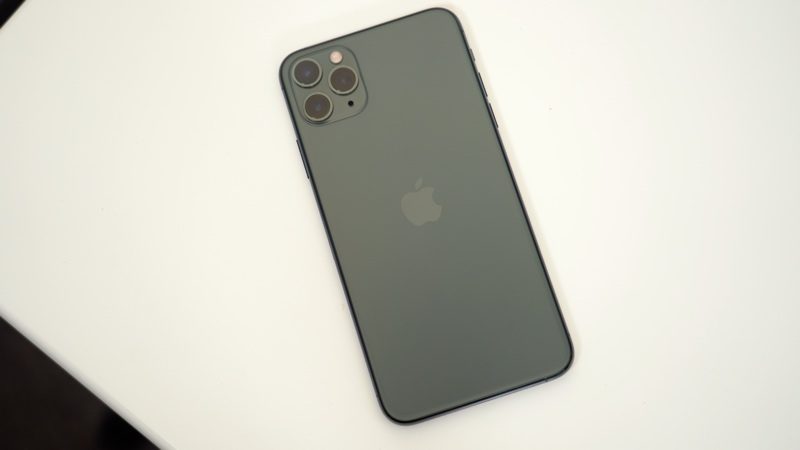 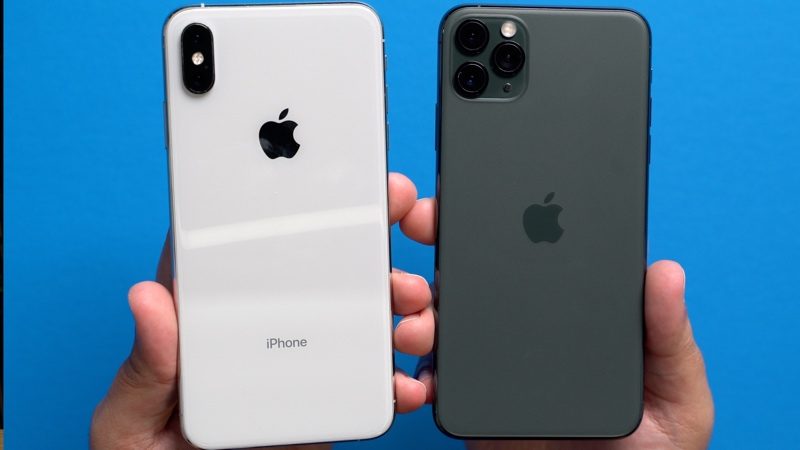 Apple's iPhone 11 also has a longer battery life than the previous-generation iPhone XR, but it's just an hour longer because the XR already had pretty awesome battery life.

The iPhone 11 Pro Max looks similar to last year's iPhone XS Max from the front, but the back stands out because of the new triple-lens camera system and the relocated Apple logo, which is now in the center. There was some chatter that the logo was relocated for bilateral wireless charging, but that's ultimately not a feature that the iPhones launched with. 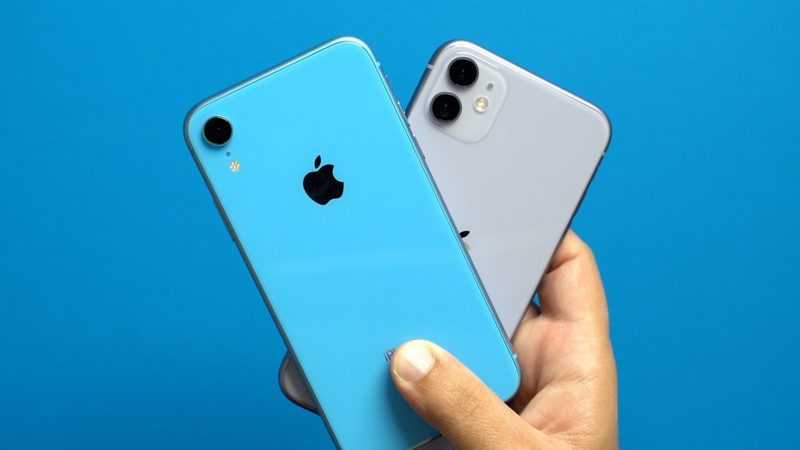 There's also a new dual-lens camera in the iPhone 11, so it too looks different from last year's iPhone XR. The new camera in both iPhones is an ultra wide-angle camera lens that lets you get super wide shots for landscapes, taking photos of architecture, and, well, anything else. It's a neat new camera feature and we're going to delve into it more in a dedicated camera video. 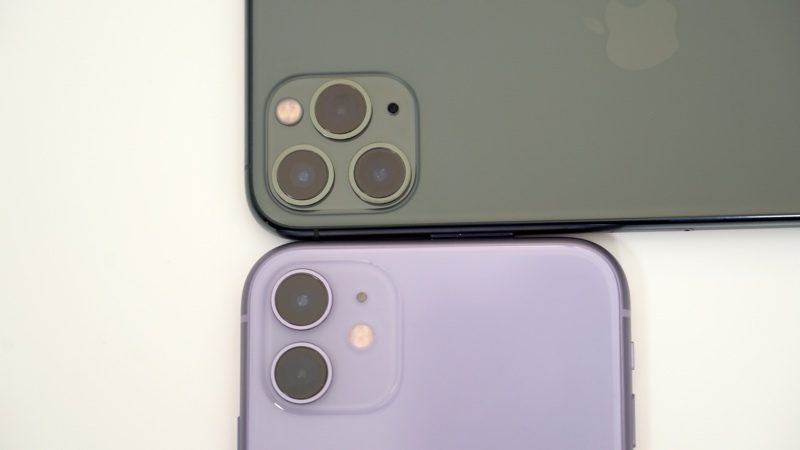 Perhaps the most interesting new camera feature is the new Night mode, which is designed to take crisp, clear shots in low lighting conditions using machine learning and photo aggregation techniques. We'll be testing this out later too, but so far, it looks promising. 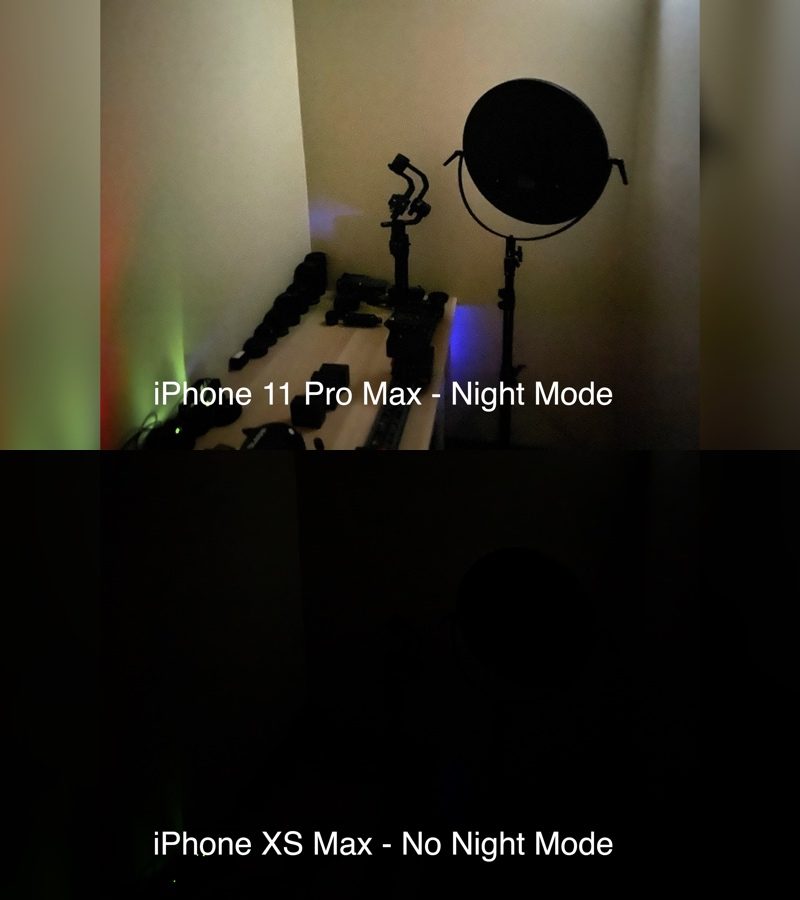 3D Touch is gone in all of the new iPhones this year, replaced with Haptic Touch. Haptic Touch does a lot of what 3D Touch does, but it's an adjustment because there's no pressure sensitivity.

Apple says Face ID is 30 percent faster in the new iPhones, and it does seem quicker. Face ID is also supposed to work from more angles, but it still doesn't seem to work from flat on a desk and it still needs to be pointed in the general direction of your face.

All of the new iPhone models use an updated 12-megapixel front-facing camera and there are some notable updates. You can turn the iPhone to landscape mode to capture a wider shot, which is great for group selfies, and there's a new slo-mo camera so you can capture what Apple calls "Slofies." On the iPhone 11, since there are now two cameras, Portrait mode works with all kinds of objects and not just people like it did in the XR.

Apple introduced a new A13 chip in the 2019 iPhones, but last year's iPhones were so quick that it's tough to notice a difference in performance in real-world everyday usage. When it comes to gaming, photography, and AR, though, you may see some faster speeds.

All in all, the iPhone 11, 11 Pro, and 11 Pro Max aren't wildly different from last year's devices in terms of design and internal components, but the camera has received some major updates that really set these new iPhones apart from last year's models. Those who are heavily into iPhone photography might want to update, but the camera-focused update may not appeal to the average user who already has an iPhone XS, XS Max, XR, or even an iPhone X or iPhone 8.

iPhone users who have an older iPhone like a 5, 6, or 7 model will see more satisfying changes, and for these models, the $699 iPhone 11 is the most logical and cost effective update.

Did you get one of Apple's new iPhones? Let us know what you think in the comments. Stay tuned to MacRumors next week because we'll have more video coverage of the new iPhones, including a deep dive into the cameras.

Please be honest and let us know if those who bought one feel it is true value for the money spent.
Reactions: 1gadget, tomaszk, decypher44 and 5 others
P

Very subtle difference between the Night Mode versus No Night Mode picture comparison...

Apple's iPhone 11 also has a longer battery life than the previous-generation iPhone XR, but it's just an hour longer because the XR already had pretty awesome battery life.
Click to expand...

Pretty awesome in-depth explanation there From what I gather it’s because most progress come from improved OLED tech and bigger batteries, in which the 11 lacks the former and gains the least of the latter.
Reactions: dantroline
W

I’d really like to know if FaceID works CLOSER to your face than it used to. When I have my glasses off before bed I tend to hold the phone pretty close to my face, and FaceID fails until I move it a little further away.

I guess I’ll know shortly when the phone arrives.

They still can’t make Face ID in an iPhone perform as well as my iPad Pro gen 3. That device picks my face up from almost any angle lying flat on a table, and quickly.
Reactions: abrantes09, NervousFish2, djlythium and 3 others
H

The giant black rectangle was a nice touch.
Reactions: Flight Plan, kazmac, airbatross and 7 others

My new black iPhone 11 128gb is on the truck 10 minutes away from being delivered
Reactions: xDKP, NervousFish2, rp2011 and 2 others

I got a Pro Max Silver. I LOVE the silver matte finish. Very classy looking phone.
Reactions: k1121j, rp2011, Oldfash33 and 2 others

1% is better than nothing
I

Coming from an 8 plus I picked up both an 11 and an 11 Pro Max with the intent of keeping one. So far the 11 looks like it’ll be the winner as I don’t think the better/bigger screen and 2x lens on the Pro are worth the additional $700 here in Aus. I also think that I’d definitely need to get AppleCare for the Pro, which as another $280, so the difference works out to ~$1k.
Reactions: jimmy_uk, Will do good and rp2011

I upgraded from an iPhone 8+ to the iPhone 11 in the green colour, sticking with 256GB. Despite improving my AppleCare coverage on my Apple Upgrade Plan, my monthly bill is going down a couple of bucks.

I'm at work, so my interactions are minimal, but so far:

- FaceID seems to have an improved field of vision as it's picking up my face at angles even my 2018 iPad Pro doesn't.
- The drop in pixel density from the 8 isn't noticeable at the range I typically hold the phone at, and it's offset by improvements to contrast.
- It feels well-balanced in the hand, and the textured rim feels a little less slick than the 8+.
- Restoring from my iCloud backup and reinstating all my apps was pretty zippy

I'm going to a show tonight, so the camera is going to get a workout; and I'm going to pick out some games that'll really put it through its paces over the weekend.
Reactions: jimmy_uk and JGIGS
F

Northern Man said:
Please be honest and let us know if those who bought one feel it is true value for the money spent.
Click to expand...

I upgraded from an iPhone 7 to an iPhone 11 and just a few hours in the upgrade feels truly worthwhile.
Reactions: AirunJae, 0989382, abrantes09 and 1 other person
A

fishmoose said:
I upgraded from an iPhone 7 to an iPhone 11 and just a few hours in the upgrade feels truly worthwhile.
Click to expand...

I was happily surprised to learn today the new pros are actually 4x optical zoom!
Reactions: hxlover904 and PlayUltimate

Anybody upgrade from a 7Plus? Been considering it but the 7Plus seems to still work ok and has 2-cameras, which is why I got it in the first place.

Northern Man said:
Please be honest and let us know if those who bought one feel it is true value for the money spent.
Click to expand...

it depends what type phone you are using now ,if you own XS Max I would say stay with it until next release to see what’s out there .But if you are using iPhone 8 Plus I would say go for it .Im happy with it.Better battery life and great camera speed not much different then XS Max
Reactions: StellarVixen

either that low light image of the promax does not do justice to the cam, or the cam is actually pure dung

Upgraded from 8 to 11 and am very happy with the new screen size and camera. The 11 is also much much quicker when moving between apps and loading web pages. Well worth it IMO.
I went for white, 128GB with a black case.
Reactions: AirunJae, 0989382, BuddyTronic and 2 others
J

The whaling and moaning about the square camera bump. "Horrible. Disgusting. An abomination!"
And it's totally fine. Apple is great at fit and finish. The hardware looks awesome.
P.S. If you don't like the square camera bump, you are out for probably 3-4 years until tech changes.
Reactions: rMBP2013, AirunJae, 0989382 and 6 others
A

looks like its not BRG at all. more of a grey with greenish overtones at some lighting angles

So they removed features, continue to keep displays with PWM, iOS 13 is behind competitors in features and this has virtually the same design as phones from the past 2 years but this is supposed to be a “Pro” model? Wow.
Reactions: CarpalMac, 1gadget, azpekt and 11 others
You must log in or register to reply here.
Share:
Facebook Twitter Reddit Email Share Link
Register on MacRumors! This sidebar will go away, and you'll see fewer ads.
Sign Up
Top Bottom