I'm in the process of opening up a G4 for an SSD replacement. Never done this before.

I started with the obvious iFixit article, and where it fell short, headed to Youtube. However, I seem to be stuck at the step where I need to remove the optical drive; I've opened the base and removed exactly 6 screws that hold the optical drive in place. That should be all of them.
In every guide I find, people seem to very effortlessly just take out the optical drive, maybe with a little bit of the kind of wiggling that you do when removing components from tight places. The optical drive is basically detached now but it seems to be stuck from the disc ejector's side. I'm afraid that if I try to pull it out any firmer, it's gonna get caught in the white shell's edge and break something. Am I missing something, maybe I just don't quite understand the shape of that thing?

When I open the disc tray door on the white shell (holding it open with a sideways USB cable for a photo), the black ejector door looks surprisingly protruding to me and I wonder if it could be getting caught by the white edges when I try to pull it out? Is this protrusion normal or is it not shut properly? This computer hasn't had any issues reading CDs.

Sorry for the bad photos; Phone cameras absolutely refuse to focus onto a pitch black area and it's hard to photograph a protrusion when you can only view it from its front, but you just may be able to tell if yours looks like this.

It is just a matter of wiggling and pulling gently.
With the iMac on it's side and the CD drive door upwards, wiggle the bottom out first and the rest should follow.

The optical drive/HD carrier assembly can indeed be a little stiff to remove after releasing the 2 EMI shield torx screws and the 4 main carrier assy screws. It's a very snug fit and needs a fair amount of wiggling movement at the same time as pulling hard rearwards (that sounds like it could have come directly from a midwife's DIY manual).......
Hopefully by the end of today, I should be able to post a detailed guide on the G4 iMac showing a few important points not indicated in iFixit.
Reactions: AphoticD
R

Hughmac said:
With the iMac on it's side and the CD drive door upwards
Click to expand...

That sounds difficult! I thought the obvious way to place the iMac would be face down. You can then rotate the base that's (inevitably) on its side, but the one position that it can not get to from that is with the CD drive door upwards!


CooperBox said:
The optical drive/HD carrier assembly can indeed be a little stiff to remove after releasing the 2 EMI shield torx screws and the 4 main carrier assy screws. It's a very snug fit and needs a fair amount of wiggling movement at the same time as pulling hard rearwards (that sounds like it could have come directly from a midwife's DIY manual).......
Click to expand...

You're both correct, it did eventually come out! But it's still beyond me how all of the tutorials showed no difficulties with it whatsoever! I spent an embarrassingly long time literally sweating with it and it seemed to make no sense. It genuinely felt like it would break next, it felt like trying to pull out something that's still attached by some secret screw. Phew. Well let's hope I'll never do that again! The only things behind there are the hard disk and the fan, right? Well, a speaker was there too but it's very unlikely to need replacing.

The next phase was with the OWC Mercury SSD; OWC sells all that legacy stuff and appears to have a massive collection of how-to installation videos, all you do is select your model. But nothing existed for this particular Mac, which is strange taken how counterintuitive and difficult its design is. The OWC SSD came in a nice sled that would fit right in the original HD's place, and some screws that fit it. The problem? The SSD had one male and one female 4-pole connector coming out of it (a kind of Y-connector), and the sled's holes didn't align with the installing location so you could only ever attach two of the screws, not four. I think the SSD's IDE adapter was too tall for the thing to be installed two the two possible positions it had with the screws. I had no idea of where to put the other remaining 4-pole connector because I'm pretty sure that from the original HD, I only removed one. I could only put the optical drive back by not using any of the screws so I could leave the IDE adapter to the center where it would meet the highest point of the dome, and I just taped the other 4-pole connector next to the SSD because I didn't find any obvious place to connect it to. Now I can just hope that these improvised decisions aren't going to backfire. 😨


CooperBox said:
Hopefully by the end of today, I should be able to post a detailed guide on the G4 iMac showing a few important points not indicated in iFixit.
Click to expand...

And thanks, that would be great if you can! (I was kinda storing up my responses so I could reply to multiple messages all at once because it's more effective)

I've now posted my iMac G4 refurb experience and SSD installation, link HERE.
Come back with any questions you may have posting from that same thread link. Any queries you may have could equally interest others - assuming I can answer correctly.
Just one additional point. Purchasing that OWC SSD kit with the adapter sled as far as I can make out really complicates the installation, and I have difficulty to follow you comment, "I could only put the optical drive back by not using any of the screws so I could leave the IDE adapter to the center where it would meet the highest point of the dome." Do I understand that the SSD & optical drive/original caddy assembly have been refitted to the upper housing and not retained by their original 4 Torx screws? I hope not! If you mean that the SSD is located in a the OWC adapter sled and not attached at all, you must at least attach it with double-sided tape. Read my refurb post to clarify.
Also wondering why you purchased the OWC kit at approx 70$ (250Gb price), whereby approx 60$ would buy you a Crucial 250Gb SSD and a StarTech IDE/SATA adapter which is the one I highly recommend.
R

Thank you so much for providing this! Now it makes sense, I got the thermal paste applied. The tube came with a tiny spatula applicator and I spread an even but thin layer of it because I thought that excess paste would simply get squeezed out and create a mess.

Yeah, the original 4 screws holding the HD in place were slightly too thick to fit the SSD from the sides, so the OWC SSD came with four of its own. They look exactly the same but on a closer look, they're just a tiny bit slimmer. It makes no difference though because the screw's head is still wide enough to fix the sled to the original HD's silver sled .... if only the screw locations didn't force the whole package into a position where the height of the IDE adaptor appears to become a problem! This is how I ended up with: No screws, the weird orphan connector taped next to the SSD, and the cable bunch fixed to the silver sled from one corner with a cable tie. Sure it's not much but maybe it's enough to keep stuff approximately where it should be. The G4 is very much kept in an upright position at all times and not jiggled around.

Why I purchased the OWC kit. Well it was a combination of ignorance and convenience: At first I'd read some stuff and really got the impression that it was pretty much the only remaining way to resurrect that Mac because the connection was obsolete and you couldn't get those anymore. I also read stuff about people worrying about not everything fitting in due to the snug space, and I took that concern seriously because I had never opened up a G4, I couldn't challenge that based on my own experience and judgement. It just felt like many things could go wrong in terms of compatibility.
Later on that idea softened a bit because I saw people listing quite different SSDs and never saw any images or videos of an OWC SSD being put into a G4. But at that point I was beginning to feel really exhausted by the jargon, and jargon it is at the point when you haven't yet opened up the computer yourself to actually experience the reality. So I settled with a convenient solution: SSD that's officially made for it, and the kit contains everything you need. It's a bit excessive in hindsight because I had to order it from the US while I'm in Europe, but well, it's done now. I'll probably get the RAM update from Europe, looks like I could double it. But why'd they have to put two different types of RAM modules to different locations, the larger one in the most inconvenient place possible... Looks like I'll have to open that thing up at some point again and do the RAM and battery change. I needed to get this machine closed up and running for now.

By the way wasn't there some upper limit to the SSD capacity on G4? 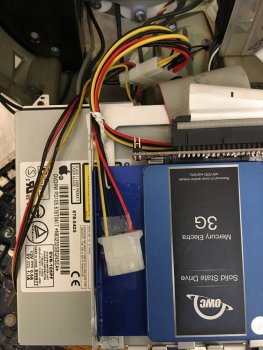 I'm not aware of an SSD capacity limit on these. I'd be surprised if one would want/need more than 500Gb, I've found that the 240Gb SanDisk or Crucial SSD's are just right.
Incidently did you get the iMac booting correctly and performing well after your SSD install?
You must log in or register to reply here.
Share:
Facebook Twitter Reddit Email Link
Top Bottom