HomePod No Longer Available for Launch Day Delivery From Apple in U.S.

As the launch of the HomePod approaches, it's no longer possible to place an order for delivery on Friday, February 9 in the United States. HomePod orders submitted today on the Apple online store will deliver next week, on February 12 to February 13. 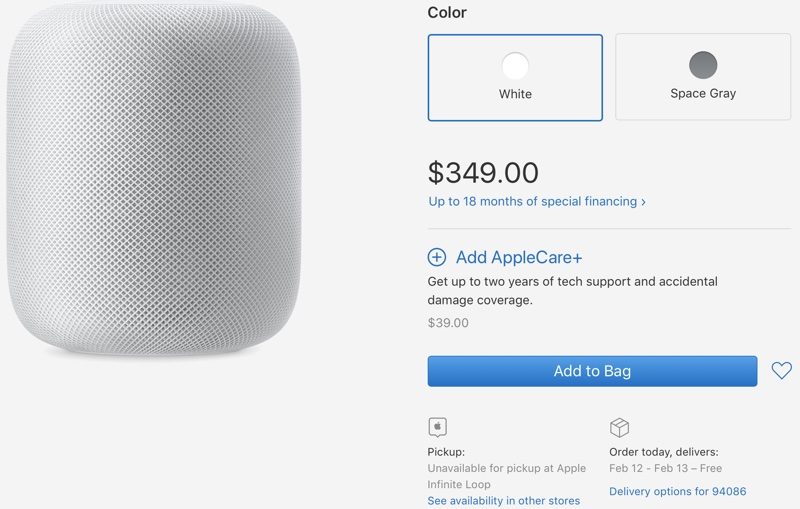 HomePod supply in the United Kingdom and Australia has also dwindled, and new HomePod orders placed in those countries will be delivered between Monday, February 12 and Wednesday, February 14.

Although HomePod shipping estimates have slipped into next week, HomePod supply has been plentiful throughout the pre-order process, and it's still going to be possible to get a HomePod on launch day.

HomePod orders have yet to ship out from Apple, but customers should start getting shipping notices soon. In the United States, Apple is sending HomePod packages from local hubs via UPS using Next Day Air delivery. HomePod orders have not shifted from preparing to ship, but shipping labels were created earlier in the week and can often be tracked on the UPS website using the track by reference option and a phone number.

This is one of those products that in 10 years you will see a video in youtube about "Apple products you never knew existed".
Reactions: Oblivious.Robot, OneMike, kaneda and 22 others

TheTruth101 said:
This is one of those products that in 10 years you will see a video in youtube about "Apple products you never knew existed".
Click to expand...

Got your pre order in didya?
Reactions: andresandiego, J.J. Sefton, Mattlike and 3 others

First apple product I have no internet in?!?
Reactions: xnu and dpjkillian
E

Probably less to do with supply and more to do with logistics and shipping - esp since white and grey both slipped at the same time.
Reactions: tkukoc, xnu, Surfer13134 and 2 others

I see potential for HomePod to take over the home entertainment center with future upgrades to the software. As of right now it's very limited in it's scope, but nothing software upgrades down the line can't open up. Once more additions have been made I could see good use in a pair of these.
Reactions: citysnaps

MHO1 said:
First apple product I have no internet in?!?
Click to expand...

I have to have it now that it’s not available

Most of these speakers are equally worthless. This one is exceptionally so...
Reactions: graphiteevo, Surfer13134, Avieshek and 1 other person

The 50 units they had for sale just sold out.
Reactions: kaneda and Avieshek

The space Grey naming convention makes me laugh for the homepod
Reactions: Avieshek

rafark said:
The 50 units they had for sale just sold out.
Click to expand...

Nah doubt they will sell 50 million just yet..

Wonder if this will see a huge scalper demand driven by buyers in Asia?

Eh, overpriced speaker. First wave will be bought by apple fans... the ones that buy everything and anything apple.
Reactions: koolmagicguy, Guy Clark and Avieshek

Or at least until they can handle stereo.
Reactions: J.J. Sefton and Gillis in Sweden
C

I still have my Quicktake camera
TheQuickTake cameras had a resolution of 640 x 480 pixels maximum (0.3 Mpx).
Reactions: ErikGrim, neutralguy, mkjj and 4 others
P

The question should be when will Apple drop support for it, considering it is running the A8, which is already quite old and close to the chopping block on iOS side.

A lot of people can't tell the difference between "this product doesn't interest me" and "this product sucks".
Reactions: Oblivious.Robot, dpjkillian, tk421 and 15 others

TheTruth101 said:
This is one of those products that in 10 years you will see a video in youtube about "Apple products you never knew existed".
Click to expand...

I have to have it now that it’s not available

yadmonkey said:
A lot of people can't tell the difference between "this product doesn't interest me" and "this product sucks".
Click to expand...

But if it’s not interesting or too expensive for me how will I be able to sleep at night without proclaiming to the world that it is trash and belongs in a landfill - and that everyone who buys one is a dumb idiot.
Reactions: tk421, Matz, tkermit and 7 others
A

1) Siri needs to become much smarter.
2) HomePod needs an aux-in.
3) An AppleTV should be able to act exactly as a HomePod (a future version should have audio outputs for connection to traditional speakers).
Reactions: tkukoc, Surfer13134, xnu and 1 other person
You must log in or register to reply here.
Share:
Facebook Twitter Reddit Email Share Link
Register on MacRumors! This sidebar will go away, and you'll see fewer ads.
Sign Up
Top Bottom