How to Turn Off Tab Bar Coloring / Tinting in Safari

In iOS 15 as well as Safari 15 for macOS Big Sur and macOS Catalina, Apple introduced some Safari interface design changes that haven't been universally welcomed. Fortunately, Apple has made some of these changes optional, such as the ability to disable tab bar coloring. 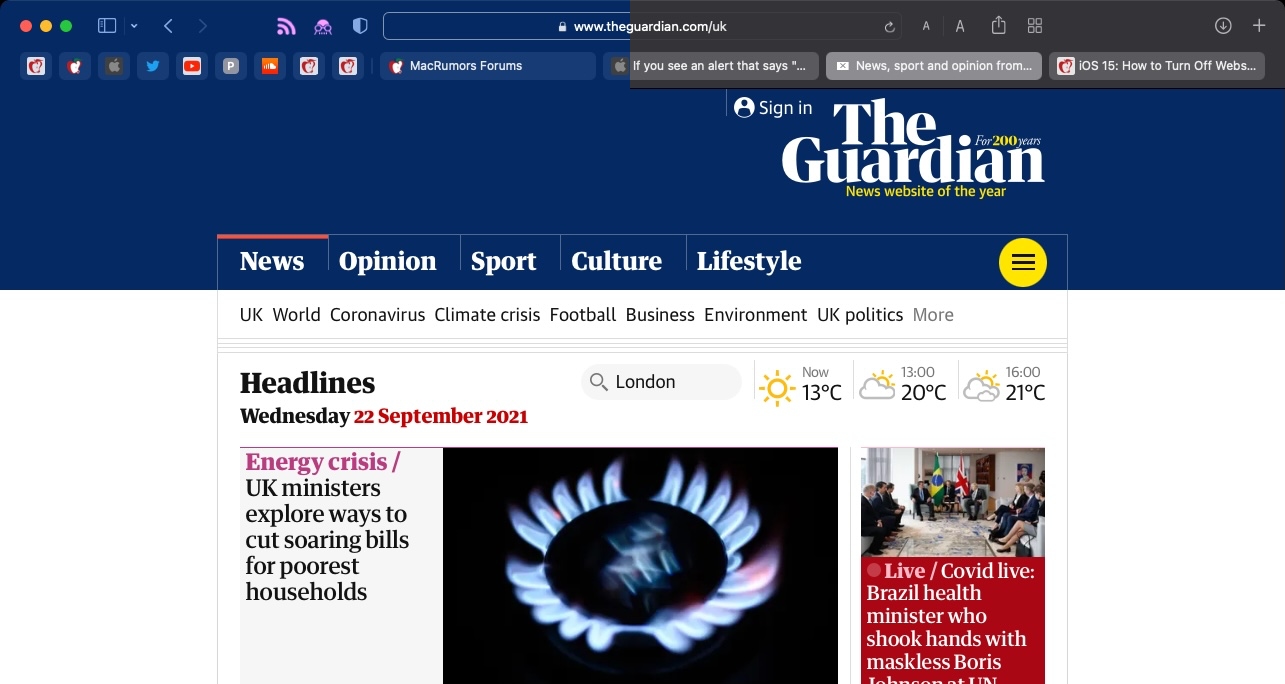 The idea behind tinting is that it allows the browser interface to fade into the background and create a more immersive experience. However, the effect doesn't always look great, especially if you have several windows arranged on your desktop. Happily, Apple chose to include an option to turn it off.
If you're using Safari in iOS 15, you can find the same option in Settings -> Safari. Under the "Tabs" section, turn off the switch next to Allow Website Tinting. On iPadOS 15, this option is called Show Color in Tab Bar, just like in Safari 15 for macOS. 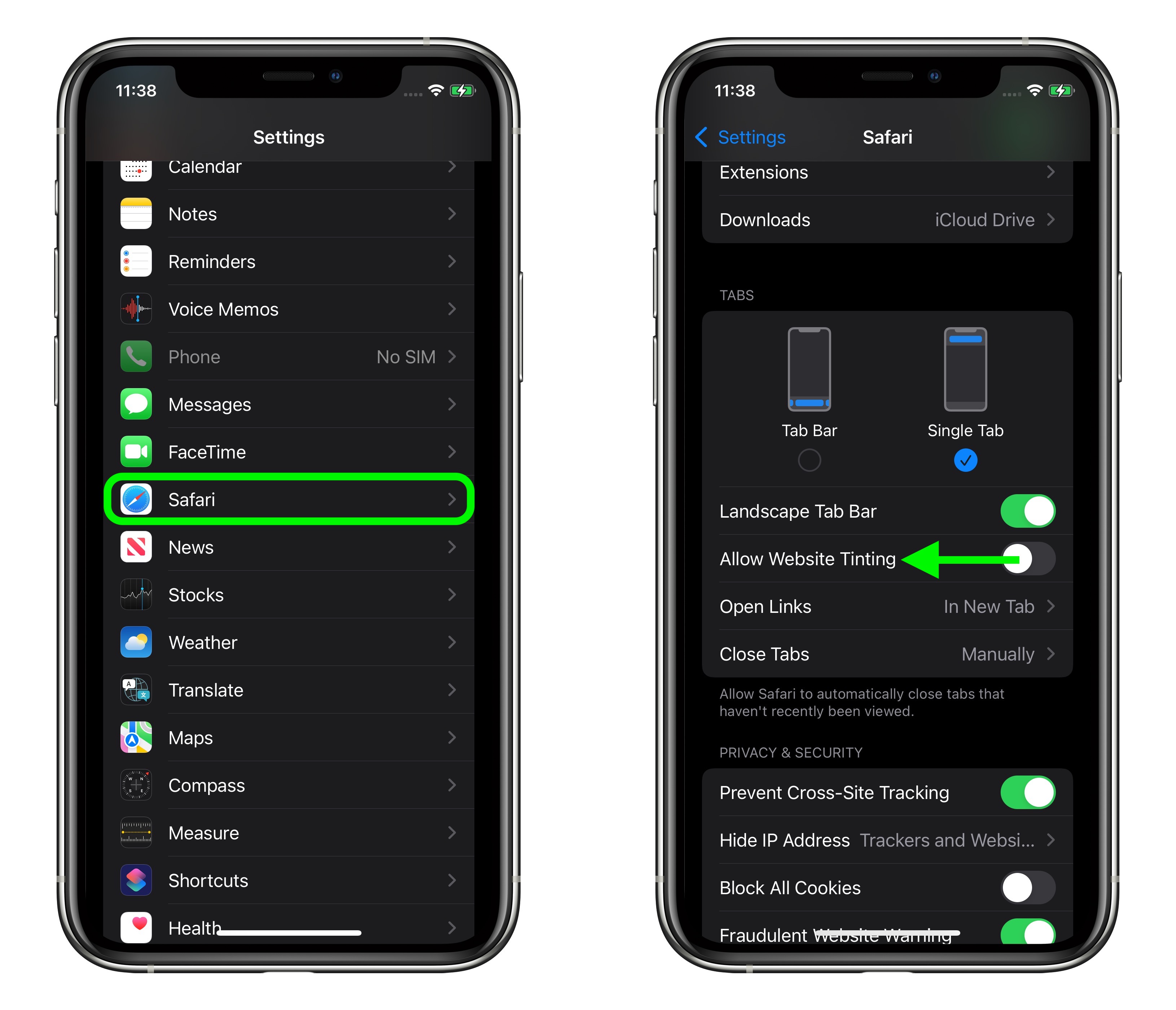 In previous versions of iOS, Apple included a "Show Color in Tab Bar" accessibility setting, which basically had the same effect as the new "Allow Website Tinting" toggle. The fact that Apple made the option more prominent suggests user aversion to tinting is more common than previously thought.

Article Link: How to Turn Off Tab Bar Coloring / Tinting in Safari

Those were the times when widgets looked like widgets and not like artwork or content. Btw. for the newcomers: Apple was once great in user interface design.
Reactions: MacMediaNet, Vegas Vic, amartinez1660 and 13 others
J

Both look terrible. I can't decide turning it on or off.

Why did Apple ruin a once great user interface on Mac? I want the Safari 14 Taskbar und Tabbar back.
Last edited: Sep 22, 2021
Reactions: MacMediaNet, Vegas Vic, V.K. and 14 others
C

I really like this new feature about the coloring of the tab bar -- EXCEPT it kind of freaks me out when the color of safari windows are different from each other. Earlier I had the standard dark mode on one window and another was light blue. It was honestly kind of weird to me. Almost enough to turn the feature off lol.
Reactions: Vegas Vic
N

I think it looks good on iOS but awful on macOS.
Reactions: Vegas Vic, FasterQuieter, DieselOneV12 and 9 others

NewUsername said:
I think it looks good on iOS but awful on macOS.
Click to expand...

I think the same. So I disable it on macOS, but it's sill enable on iOS/iPadOS
Reactions: DieselOneV12, michaelnugent, Glideslope and 1 other person
L

I'd love to use all this new Safari functionality but I've abandoned Safari due to its inability to install extensions like uBlock Origin and similar privacy protecting extensions. Would Safari 15 do better in this regard compared to the versions 14 and 13?
Reactions: HVDynamo
I

The comments here remind me of when Apple changed the iOS look. Everyone complained, but now the old one looks so bad in hindsight. Who moved my cheese?
Last edited: Sep 22, 2021
Reactions: V.K., PSeg, Chaos215bar2 and 11 others
C

Well, disable one of the major features and innovation presented during the WWDC .... I don't see the point. What remains of very interesting in upgrading?
T

I don’t mind the tab colouring, but the address bar at the bottom of the screen was really annoying me and inconsistent with iPad and MacOS. Thanks for the screen images above, I’ve turned it off now!
Reactions: Digital Dude

ctg7w6 said:
I really like this new feature about the coloring of the tab bar -- EXCEPT it kind of freaks me out when the color of safari windows are different from each other. Earlier I had the standard dark mode on one window and another was light blue. It was honestly kind of weird to me. Almost enough to turn the feature off lol.
Click to expand...

I’m sure web designers will add those theme color tags when macOS Monterey comes. Additionally, I learned that using typical media queries allows for the coloring to change with light/dark mode settings.

Thank god (or Tim?) for providing this option. The tabor tinting are so eye-straining.
H

This was one of the first things I disabled after the upgrade on both iOS and macOS.
Reactions: AndreGB, ivantheipodder, idktbh and 3 others
M

Horrible design especially on iPad. These fine white lines are horrendous. Disabling coloring only makes it slightly better. On Mac it could maybe work if they had made it bit more subtle. The change is too harsh when switching tabs and for some websites it uses colors that are just way too intense.
Reactions: steve333, Chaos215bar2, Arran and 2 others

I'm constantly confused whether a dark grey tab is active or not active. This is bad UI design.
Reactions: soundsgoodtome, MacMediaNet, Scott H and 34 others
I

That setting is in Accessibility > Display
Reactions: TheralSadurns and ecatomb
I

I love this feature!! Keeping it on forever
Reactions: Apple Knowledge Navigator and Konigi

iLG said:
That setting is in Accessibility > Display
Click to expand...

I forgot this option, it's something I used long time ago ?
But I don't find it for iOS...

I'm on Apple's side here: I love the new UI, and although there is still room for improvement, I think it's heading in a great direction.

My disappointment is that this web tinting feature does not seem to work on many websites that I've tried. I thought it was broken at first as I wanted to see it in action, as I couldn't find a website where it worked. I hope it gets more common in the near future!
Reactions: verniesgarden and biracialfamily91

Whenever a new iOS / macOS update comes out, I spend the first half an hour digging through various settings to disable whatever new 'features' they implemented. Maybe I'm just old and miserable.

Ironically the only thing I ever specifically turn on with a new Mac is Dock magnification ... after I've set it to the left.
Last edited: Sep 22, 2021
Reactions: Mwillems, Octavius8, Devnul0 and 1 other person

Disabling this was one of the first things that I did. Entirely form over function.
Reactions: Mwillems, Octavius8, antiprotest and 9 others
U

Not enjoying the new Safari at all. It now seems to be impossible to drag from the web address to a folder on the favorites bar. Instead you have to click on the '...' blob and navigate through a menu. I also much preferred the old style tab bar instead of the large lozenge style that is now used.

The new Safari seems a step back for usability, and frankly does not even look particularly good.

Seriously thought that the Safari coloring was an interface glitch! Thank you for this article!
Reactions: Mwillems, antiprotest, Apple Knowledge Navigator and 1 other person