One of the new features in iOS 12 is an augmented reality app called Measure, which Apple has designed to make it easier for you to measure various real-world objects using 3D spatial detection techniques.

You can continue using this method to get the full dimensions of different objects in your room, with the ability to set multiple anchor points if desired.

Haptic feedback is included in the Measure app, so you'll feel little haptic taps whenever you set an anchor point, for physical feedback. Haptic taps are also included whenever the app detects an obvious stopping point for a measurement, such as the end of a wall.

To clear your anchor points and start over at any time, tap the "Clear" button.

Once all of your measurements are in place, tap the white camera button to take a photo that displays all of the measurements overlaid on the object you're measuring.

You can also tap on the arrow of one of the measurements to get a pop up with the current readings that you can copy and paste into another app like Messages or Notes.

For certain square-shaped objects that the Measure app detects, the detection of the dimensions will be automatic. To get an automatic measurement, choose a square or rectangular object and hold the iPhone in front of it. 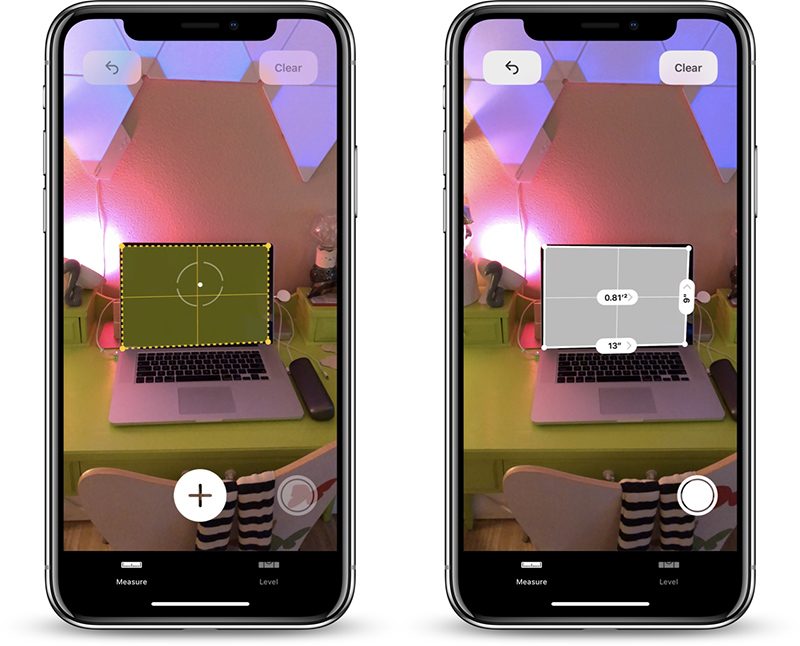 If it's going to take an automatic measurement, you'll see a yellow square appear, which you can then tap to get dimensions. If it's not going to do automatic detection, you're going to need to use the tap method to draw individual lines.

The accuracy of the Measure app depends heavily on the precision of where the end points are placed, so there's room for error.

It's great for quick measurements to get an idea of size, but where precise measurements are required, it's probably best to double check with a physical measuring method.

To use it, tap over to the level portion of the app, which is located at the bottom. Hold the iPhone in either portrait or landscape orientation with no case and balance it on an object such as a picture frame to get a reading.

If you tap the screen when using the level app, you can set a 0 degree reference angle to make measurements from, and laying the iPhone flat allows it to be used as a bubble level.

Article Link: How to Use the New Augmented Reality Measure App in iOS 12

Apparently someone at Macrumors really loves to make tutorials
Reactions: MaximizedAction, DEXTERITY, ILikeAllOS and 9 others
F

Freida said:
Measure is not available on iPhone 6? running second beta of iOS12
Click to expand...

I have been quite impressed with the measurements I get on my iPhone X. I haven't used it a lot but I have probably tested it with about 10 or so things. Seems accurate enough to be useful for general measurements.
Reactions: ILikeAllOS, 341328, martyjmclean and 1 other person

This could be potentially a very useful tool for everyday use. I can't wait to see the end result after it's been calibrated.
Reactions: ILikeAllOS, martyjmclean and house13um
C

The ability to modify your anchor points is very snazzy. Just hold and drag a point and while you’re doing that your device will zoom in a little to give you a little more precision.
Reactions: ILikeAllOS, bluespark, martyjmclean and 2 others
L

Yeah, IMO the 6s and 7 left the older devices behind. 3D Touch, AR, faster TouchID and the elimination of the mechanical home button on the 7s and newer. I’ve gotten so used to bringing up multitasking with 3D Touch on the left edge of the screen too.

How well does it measure a yardstick?

One of the features of iPhone 8 and X is that they're supposed to be somehow more accurate for AR stuff. (I think it's supposed to be due to better calibration between the camera and the accelerometers than previous iPhone models, or something like that.)
Reactions: midkay
G

Wandering Wastrel said:
How well does it measure a yardstick?

lec0rsaire said:
Yeah, IMO the 6s and 7 left the older devices behind. 3D Touch, AR, faster TouchID and the elimination of the mechanical home button on the 7s and newer. I’ve gotten so used to bringing up multitasking with 3D Touch on the left edge of the screen too.
Click to expand...

Totally forgot - but I use that 3D Touch function all the time. Very useful when switching quickly between apps.
U

Wandering Wastrel said:
How well does it measure a yardstick?

Very fruitful API provided by Apple. Well prepared for spatial addition of surfaces (identifiers) and room elements (e.g. home furnishing elements).
I would be pleased if there would soon be apps that dare to extrapolate food volume to calorie quantity in the area of diet. That would be a quantum leap.
Reactions: midkay
0

(this app requires specific features not available on this device)

Yet it is in the list of supported devices
Reactions: weup togo

I’ve played with this in the beta on my X. So far, it’s not been very impressive. It seems to very quickly lose track of the points in space if you move your phone from the starting position.

Works well on my 9.7 inch iPad pro. I think this could be a very useful feature.
H

Now we need to get a Google vs Apple measure app comparison to get all the fanboys riled up!

For what it's worth, Google's wasn't accurate for me. Need to test out iPhone now...

This is one of those features that won’t work perfectly at first. We will complain. Then, in 10 to 20 years when it’s the only scientifically accurate way to measure things, we will take it for granted and wonder how we ever knew the size of anything. This is huge. (No pun intended.)
Reactions: tk421, ILikeAllOS, dennysanders and 2 others

The issue is that I would not trust these measurements at all yet so I would have to do it all over manually to be sure anyway. Certain stuff just needs to be measured properly like I wouldn’t want to buy a 55 inch tv that does not fit after all
Reactions: Oblivious.Robot, Marekul and iMacmatician
F

itsmilo said:
The issue is that I would not trust these measurements at all yet so I would have to do it all over manually to be sure anyway. Certain stuff just needs to be measured properly like I wouldn’t want to buy a 55 inch tv that does not fit after all
Click to expand...

It comea down to the relative size of the pixels for the object being measured. I would imagine a pixel correlates to tens of millimeters for an object 3 meters away from you.
N

its part of their job?

I realize MacRumors is trying to stay relevant and talk about everything Mac. But I have a problem with constantly explaining how to use beta features.

New features need to be intuitive. That’s part of Apple’s whole philosophy. But if we have a website constantly jumping in to say look look this is how you use it, that defeats the purpose. Testers will be less likely to notify Apple that they couldn’t figure out a feature on their own.

This needs to be part of the beta testing process. When it’s deployed, that will ensure the feature is much more intuitive for the user. There is a reason why Apple never includes instruction manuals.

Apart from that, constant detailed articles about things that aren’t even released yet and which might change significantly before release seem pointless.

Yes, people want to know about beta features. But there’s a line between being informational and providing fully detailed instructional tutorials, and I think it’s crossed waaaay too often here. How about waiting until we have a released product to provide that information?
Reactions: SigEp265, IGI2, rom3o and 1 other person
You must log in or register to reply here.
Share:
Facebook Twitter Reddit Email Share Link
Register on MacRumors! This sidebar will go away, and you'll see fewer ads.
Sign Up
Top Bottom