Intel today announced that it plans to drive large-scale mainstream adoption of Thunderbolt by releasing the protocol's specification to the industry next year under a nonexclusive, royalty-free license. 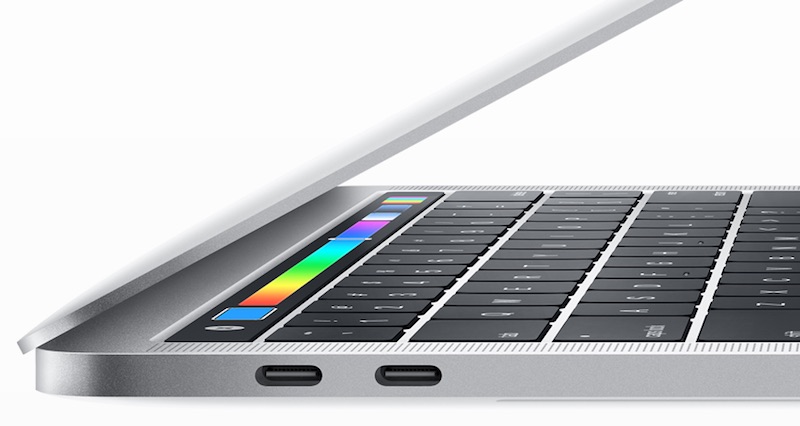 Intel also revealed plans to integrate Thunderbolt 3 into its future CPUs, but it didn't provide a timeline as to when. The all-in-one design will take up less space on a Mac or PC's logic board, and reduce power consumption by eliminating the need for a standalone Thunderbolt controller.

"Apple and Intel have collaborated on Thunderbolt from the beginning, and as the industry leader in its adoption, we applaud Intel's efforts to integrate Thunderbolt technology into its CPUs and open it up to the rest of the industry," said Dan Riccio, Apple's senior vice president of Hardware Engineering.
Click to expand...

Intel said Thunderbolt 3 built into the processor could pave the way for thinner and lighter devices, although the current Thunderbolt 3 controller used in Apple's latest MacBook Pro has a package size of 10.7mm×10.7mm, so any logic board space saved would likely be negligible.

Thunderbolt 3 carries power, USB, DisplayPort, HDMI, and VGA over a single port that shares the USB-C connector design, creating one standard for connecting most accessories and peripherals. Apple's latest MacBook Pro has two or four Thunderbolt 3 ports depending on the model.

Thunderbolt 3 can transfer data at speeds up to 40Gbps, allowing for a full 4K movie to be transferred in less than 30 seconds. The interface is suitable for 4K virtual reality experiences on PCs, high-end gaming, and single-cable peripherals such as external displays, docks, and storage drives.

Sounds like great news. 40Gbps is just insane speed; I can't wait for this to become a ubiquitous standard.
Reactions: milo, Jamalien, prasand and 22 others

Didn't realize this was Intel's call - always assumed it was Apple who owned the rights.
Reactions: macguru212, prasand, michaelsviews and 1 other person

JilzVT said:
Didn't realize this was Intel's call - always assumed it was Apple who owned the rights.
Click to expand...

Why? Intel invented it.

But this is a really good thing.
Reactions: Steve121178, milo, Jamalien and 16 others

This news just confirms that Apple was right in ditching all other ports. In 2/3 years, anyone who bought an expensive computer with old ports will regret it
Reactions: MacsRuleOthersDrool, davidmartindale, foxkoneko and 12 others

This is some damn good news. Ubiquity helps standards proliferate. Royalty free licensing will definitely help with the ubiquity.
Reactions: Glideslope, sterlingindigo, Bigsk8r and 3 others
J

JilzVT said:
Didn't realize this was Intel's call - always assumed it was Apple who owned the rights.
Click to expand...

It's always been Intel's That was made clear when Thunderbolt was first introduced.
Reactions: appleish19

Nice! I'm starting to save for my next iMac now...

$200/month will have me ready to pick it up in early 2019.
Reactions: muratura, Jerion, Novus John and 1 other person

I wonder how many thunderbolt capable Macs I'll have gone though before there is a sensibly priced thunderbolt peripheral. I am up to 3 so far and have yet to use the port. I had actually given up on it.
Reactions: Steve121178, Altis, lazard and 22 others
M

Having it built in will save on space, cost, and efficiency. This is great news.
Reactions: JRobinsonJr and BeefCake 15

Actually it adds to the confusion, as now you'll have to find out if the USB-C port also supports Thunderbolt 3.

Most of the lower to mid range devices will keep using USB 3 or 3.1 for connectivity, and not Thunderbolt.
Reactions: atikalz, xalea, rjohnstone and 1 other person

That's exactly what I was thinking. This may pave the way for AMD to adopt it, which would be nice.
Reactions: milo, V.K., LordVic and 1 other person

DanielDD said:
This news just confirms that Apple was right in ditching all other ports. In 2/3 years, anyone who bought an expensive computer with old ports will regret it
Click to expand...

Regret it how? Person buys brand new computer today, May 24th. A standard config with USB, HDMI, Display Port, SD Reader. Come 2020, the computer still works. So what's to regret? I bet you can find forum members with computers that are 2, 3, heck 5-7 years old (or older) running perfectly fine. I know my 2011 MBA is still humming along. It's pretty hard to regret something that doesn't exist yet, and it definitely isn't a confirmation that Apple was correct about anything. In fact, didn't Apple recently acknowledge some of their decisions weren't exactly spot on?
Reactions: Adam-Jobs, Dozer_Zaibatsu, milo and 25 others

Very glad to hear this. Superior tech is pointless if no one wants to pay the extra price to use it. (I'm looking at you, FireWire!)
Reactions: milo, kironin, djbuddha and 4 others
C

MacRumors said:
Intel today announced that it plans to drive large-scale mainstream adoption of Thunderbolt by releasing the protocol's specification to the industry next year under a nonexclusive, royalty-free license.

I wonder if they are going to take any steps to streamline the certification process? If I'm not mistaken certification to allow a device to claim Thunderbolt 3 compatibility and use the Thunderbolt logo takes time and money so making the protocol nonexclusive, royalty-free in itself won't necessarily mean a flood of low-cost Thunderbolt 3 devices.
Reactions: thekev, kwikdeth and tongxinshe
S

Just keep the damn port the same for a long time, make everything backwards compatible, and it will eventually catch on. If Thunderbolt 4 has a different port than Thunderbolt 3, it's over.

I like the USB-C port so far, I've used it on the MacBook and now my new MacBook Pro. I still think the Lightning connector is the best physical connection on any consumer peripheral, but this USB-C is pretty decent. Way better than USB-A, FireWire 400/800, or Mini-A or Micro-B. At least it's reversible!
Reactions: Zirel and Mr. Retrofire

Maybe thunderbolt will actually get some use now
Reactions: xalea and Mr. Retrofire

longofest said:
That's exactly what I was thinking. This may pave the way for AMD to adopt it, which would be nice.
Click to expand...

Actually nothing stops AMD, or rather AMD partners, that are building MoBos with AMD chipsets, to buy the Alpine Ridge controller, and add it to the MoBo. The things is that Alpine Ridge Controllers costs 22$ alone, and it makes the cost of MoBo go up by at least 50$.

Opening up the spec of protocol makes everything much, much easier. Interesting actually. It right now makes 100% possible(pay attention to the word ), that we might see AMD based Mac in future, if Thunderbolt protocol is opened up. Possible, does not mean confirmed.
Reactions: Appleaker and hishnash

redheeler said:
Actually it adds to the confusion, as now you'll have to find out if the USB-C port also supports Thunderbolt 3.

Most of the lower to mid range devices will keep using USB 3 or 3.1 for connectivity, and not Thunderbolt.
Click to expand...

Hopefully, with the removal of the licensing fee lower to mid range devices will have it included since it would necessarily add to the build cost. The cynic in me says that OEM's will initially keep it on their upper tier devices as differentiation.

redheeler said:
Actually it adds to the confusion, as now you'll have to find out if the USB-C port also supports Thunderbolt 3.

Most of the lower to mid range devices will keep using USB 3 or 3.1 for connectivity, and not Thunderbolt.
Click to expand...

DanielDD said:
This news just confirms that Apple was right in ditching all other ports. In 2/3 years, anyone who bought an expensive computer with old ports will regret it
Click to expand...

In 2-3 years anyone with last year's MBP for professional use will likely be looking for a new one. I never keep a laptop over 3 years. By then there is usually something worth upgrading to and the 3 year old model getting tired. This is even more true now that Macs are sealed and RAM and internal storage can't be upgraded.

Right now not having even 1 USB3 port or an HDMI out port is annoying. If I had saved $ by Apple eliminating these ports it would be easier. But Apple jacked up the price, not lowered it. If Apple had jacked up the price but included an adapters to make up for the lost ports I might judge the computer less harsh but Apple not only did not include even a USB adapter, the adapters it sold were so crazy priced it had to put them on "sale" to not completly scare people off.

I hope Intel does eliminate the royalty fee and take the shackles off so there is one port to rule them all and all the peripheral makers adopt it too. I'll be back in dongle-free happy land. But until then, yes, I'm a bit jealous of people with older MBPs with their full array of ports. I don't hate my TB MBP, I just don't love it. Hindsight, yes, I wish I delayed upgrading but my previous MBP was getting up there and slow and hard to say what Apple's laptop upgrade schedule is anymore so I took the leap.
Reactions: otternonsense, jwdsail, ssgbryan and 1 other person

would be epic to see a Zen based CPU in a mac. They are really much better for creatives, with a focus on high core count over high Ghz (after all apple never let you overclock so what is the point of an overclockable intel cpu)

It could bring down the price of the top end iMac with Ryzen chips being much cheaper for the same performance + you get then benefit of ECC memory without going for the mad range Xeon prices.

Also for a mac pro at the moment the new AMD epic looks much better suited than intel's offering (we don't know about prices yet through)
Reactions: mdriftmeyer and nt5672
You must log in or register to reply here.
Share:
Facebook Twitter Reddit Email Share Link
Register on MacRumors! This sidebar will go away, and you'll see fewer ads.
Sign Up
Top Bottom