One of Intel's major new initiatives has been to push its processors down into more energy-efficient designs over the next few years. The first step in the process was introducing a new class of laptops dubbed "Ultrabooks". The first Ultrabook demoed was an ASUS model that bore a close resemblance to the MacBook Air, and Intel feels that these ultra-thin and light laptops could make up 40% of the consumer laptop market by the end of 2012. 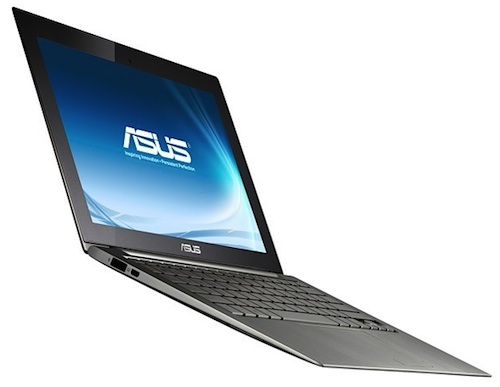 DigiTimes reports, however, that manufacturers are having trouble pricing their new machines under Apple's MacBook Air, raising concerns about their prospects for market success.

The sources pointed out that the new MacBook Airs are priced at about US$999-1,599 with rather strong demand in the US; however, designing an ultrabook based on Intel's technical suggestions will still be unable to reduce the machine's price level to lower than the MacBook Air's unless Intel is willing to reduce its prices, which already account for one-third of the total cost.
Click to expand...

Intel's effort to match the MacBook Air's thin profile has seen the company push forward its new platform with more components integrated directly onto the machines' circuit boards and using non user-replaceable batteries, mirroring Apple's own steps. Those requirements have, however, pushed up the cost of those components beyond that of the modular ones typically used in PCs, resulting in Ultrabook pricing coming in at the same levels as Apple's MacBook Air.

Add to this that Apple has had the first mover advantage for a couple years now. Hard for others to excel unless they can undercut Apple or outperform them.
Comment

What ever apple makes, everyone else has to follow behind them. But they can never make their product as good as the apple product

Apple has such a great head start in the ultra-thin notebook pc and the tablet markets.

Apple's last 10 years have been a blueprint on how to totally dominate the market. That Steve Jobs is a bright kid.
Comment

When do we get lawsuits for companies using unibody design? Wasn't that a patented manufacturing process?
Comment
F

I really felt the last updated MBA was aggressively priced for what it is. Now this just proves it. Let's hear that Macs are overpriced now?!
Comment
S

I'll be the first person to say... nice try
Comment

I'm forwarding this to a few naysayers in the family. It ought to keep them a little bit more quiet!
Comment
U

resemblance? If we account properties as screen, keyboard, folding and thin factor, then yes - it's Apple!
Comment

Yes, just a resemblance. You see that ASUS logo on the front? It looks nothing like the Apple logo.
Comment

Yes it says ASUS on the screen.... what more do you want
Comment
D

FrizzleFryBen said:
I really felt the last updated MBA was aggressively priced for what it is. Now this just proves it. Let's hear that Macs are overpriced now?!
Click to expand...

It's entirely possible to say that the MBA is overpriced.

I'm not prepared to pay a premium for a (slow) computer just because it's thinner.

For what you're getting it might be good value, but it's now your only choice other than a "pro" machine.
Comment

Hardly surprising. Apple's MacBook Air pricing has been very aggressive since the Rev D. For the price, you get a very light notebook and for people looking at size and weight as specs, there's hardly anything out there to compete with it.
Comment
F

funny how Apple can innovate and create new categories of products over and over, and still be cheaper than the competition. Same deal with tablets. They are stomping on everyone in overall design and quality of ecosystem, and they're not being undercut price-wise.
Comment

So by the logic of the h

ters, this means that the PC manufacturers are even more greedy than

The new 13.3" MacBook Air is an amazing product. It packs quite a punch in a very thin and light package. It is as fast as my last year's 17" Pro -- actually much faster at reading/writing to the disk. The Air's SSD is the way of the future. Please, please buy SSDs now so the price can come down for the rest of us. I want a SSD in every computer I own.

If Apple can bring a similar Air design to a 15" laptop at near the same price as the current Pro, watch out!
Comment
G

Well, looks like everyone is feeling the pain of Apple using it's loot to buy up all that manufacturing capacity. Can't make a machine cheaper than Apple? Burrrrrn!

I mean, if you had posted this and that article about Apple having more money than the GOVERNMENT 10 or even 5 years ago, people would have laughed their asses off!
Comment

topmounter said:
So by the logic of the h

ters, this means that the PC manufacturers are even more greedy than

Apple has never quite been overpriced like some people like to claim, not when you compare the PC market close to a refresh, and you compare spec for spec.

A lot of the "MBA is overpriced!" crap comes from people who completely ignore size and weight. Same for the Mac Mini really, SFF PCs are not really cheaper.
Comment

KnightWRX said:
Apple has never quite been overpriced like some people like to claim, not when you compare the PC market close to a refresh, and you compare spec for spec.
Click to expand...

Apple's mid-range machines are hideously overpriced for what they are. Their low and very high end (as long as you buy your own RAM! lol) machines are usually priced much more competitively, to the surprise and chagrin of haters.
Comment
E

Daveoc64 said:
I'm not prepared to pay a premium for a (slow) computer just because it's thinner.
Click to expand...

Many people are willing to pay a premium, and it is nice to have that option.
Comment
G

Daveoc64 said:
It's entirely possible to say that the MBA is overpriced.

I'm not prepared to pay a premium for a (slow) computer just because it's thinner.

For what you're getting it might be good value, but it's now your only choice other than a "pro" machine.
Click to expand...

It's still faster than the white macbook was so what's the problem?
Comment
F

Daveoc64 said:
It's entirely possible to say that the MBA is overpriced.

I'm not prepared to pay a premium for a (slow) computer just because it's thinner.
Click to expand...

It is overpriced for its performance but not for its fit&finish nor the form factor. It has happened quite for sometime. When iRiver and other tried to match iPod, when AOpen(anybody remember this?) tried to match the Mac Mini, or when Dell and Samsung tried to match Macbook Air, the competing non-Apple product with similar credentials ended up costing more than the Apple product.

Plus in most of those cases, Apple still had an edge in build quality and design. For instance, while Dell Adamo and Samsung Series 9 are very well built devices, they just don't have the level of solidity as a whole because they don't have the same unibody construction. It's pretty unfortunate in a way that even after 3 years or so since the introduction of unibody Macbook Pro the competition still haven't caught up.
Comment
H

I can't feel sorry for these companies. Their business model has always been to forgo R&D costs so they could build knock-offs at cut-rate prices. Well, now it's come back to bite them. They should have known that R&D is more than UI and case design. Manufacturing would come into play too. Can they really say they didn't see this coming? If so, maybe this business isn't for them.
Comment
You must log in or register to reply here.
Share:
Facebook Twitter Reddit Email Share Link
Register on MacRumors! This sidebar will go away, and you'll see fewer ads.
Sign Up
Top Bottom