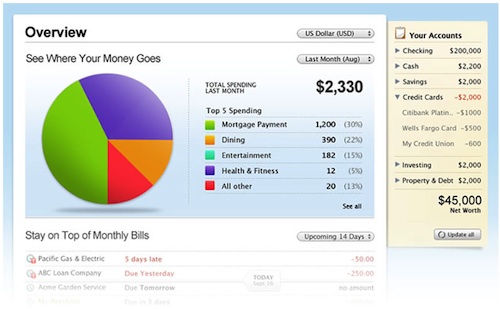 QEM launches a new era for Quicken on the Mac. It marks Intuit's first Mac-native application for Quicken, that is, a product developed specifically to run on a Mac operating system, instead of adapting a product originally designed for a PC. QEM's features serve a broad array of essential customer needs, focusing on quick set-up, ease-of-use, and Mac-like intuitiveness in design and workflow. The redesign reflects the influence of the Mint.com product team and its deep experience with Apple products.
Click to expand...

Walt Mossberg offers a review of the new Quicken, finding "seriously mixed feelings" for the update. Mossberg notes that the application now benefits from a true Mac look and feel, along with updated data conversion from Windows versions and more banking interface options. QEM, however, also feels to Mossberg like a stripped-down version of Quicken for Windows and even loses some features that were present in Quicken 2007 for Mac.

Most important, Quicken Essentials doesn't display, or even allow you to enter or edit, individual transactions in investment accounts. It only shows a snapshot of the current status and value of the overall investment account and of the securities or funds it holds. It also lacks a bill-paying feature. And it can't export your data to Intuit's popular TurboTax program. Even the much-maligned older Mac version could do these three things.
Click to expand...

Mossberg reports that the Mint team now in charge of the division has conceded that the Mac version is missing some important features and is currently targeted at users new to personal finance software with only basic needs. The company plans, however, to add such features as detailed investment tracking and bill pay to a future update.

Intuit announced in early 2008 that it would be rewriting Quicken for the Mac platform, and was expecting at that time to release the new version later that year. After several delays and another complete ground-up rebuild, Intuit committed last July to a February 2010 release that it met with today's launch.

Quicken Essentials for Mac is available via CD-ROM or direct download for $69.99.

Meh
In other news, the sun came up today
A

Does everything their own site, mint.com, does, but for a lot of money.

It's a little shocking that a software company can so underserve a burgeoning sector of the market as much as Intuit does.

This is what they've spent so much time working on, a stripped down version of a product already released?

I hope they notify me when Quicken Pro for Mac is available.
B

If they make a similar version for the iPad, I'll buy it in a second.
B

Finally. I was waiting for this for a while. I made the switch to Mac a while back and didn't want to install windows just to run Quicken.
D

Since it essentially mint.com running locally, what is the point. With mint.com I can access it from anywhere, get a free iPhone App, with all the same features.

Why not just call the thing mint and have it sync with the mint.com server and make it cheap $10-20. I think they would have a lot more success.

The last time that a major software company announced something special for the Mac by writing a whole new app from scratch instead of porting the existing one we got Entourage instead of Outlook from MS.

And it sounds like Intuit just shipped their version of Entourage.

For the last year or so I was part of the beta test for this which was originally called Quicken Financial Life for Mac. A lot of the better features came along in recent builds and has seen great improvement since the start of the beta process. While I agree that the investment and export features are a disappointment, I think there are quite a few really nice features in this release and am looking forward to using it. It simplifies a lot of the process for the home user to pull CC and banking information into software, categorize and analyze their spending and budgets. I looked at a lot of other Mac financial softwares recently such as MoneyWell, SeeFinance, Money3 and almost every other software out there and many of them missed the boat on interface and reporting. This release will probably have bugs and still need improvement as it is a v1.0 of this incarnation for Quicken, but I think it has the potential through updates not only for bug fixes but for additional features to be a really good home solution. I pre-ordered mine and will be receiving it by early next week.
U

I was pleasantly surprised that it works seamlessly with TD CanadaTrust (Canadian bank) even though they are saying Essentials is not supported here. I haven't been a Quicken user in years so I am treating this like a 1.x app. To that end it matches up quite well to iBank, MoneyWell, Money, etc (I tried them).

One annoyance that I have is that none of the personal finance apps seem to do budgeting as well as I would expect. I want a budgeting app that has great print capabilities and reports which show budget vs actual.

danielwsmithee said:
Since it essentially mint.com running locally, what is the point. With mint.com I can access it from anywhere, get a free iPhone App, with all the same features.
Click to expand...

The point would be that some people don't trust all of their financial information to the cloud.

Mint is also currently missing the ability to enter manual transactions and scheduled transactions. And it handles split transactions rather poorly. Of course, Intuit has promised these features in the future.
A

0racle said:
The last time that a major software company announced something special for the Mac by writing a whole new app from scratch instead of porting the existing one we got Entourage instead of Outlook from MS.

Entourage removed compatibility with the Windows version, while this adds it.

A better comparison would be iMovie...

And except for the fact that iMovie does not copy its sources (and its lack of a "save" feature), its much better than the older iMovie in many ways.
N

Tons of free software, and if you are like me, not a super rich, my major bank has all I have and owe, on one single page!......

I've been beta testing this for a while and it's a disappointment. Yes, the basic functionality is solid, and yes it's more "Mac like" than its predecessor but really you're spending $70 on a glorified checkbook register. You'd be better off using mint.com which is now owned by Intuit and costs exactly $0. Two examples of my own disappointment with QEM 2010:

My 401k is with Paychex. While mint.com works flawlessly with my 401k, QEM 2010 does not work with Paychex. Further, if your 401k provider is not in the supported list there is no method of manually adding/tracking it.

My checking and savings account are with Webster bank. While mint.com is able to automatically connect and pull balances and transactions, QEM 2010 forces me to login to the bank's website and export a QFX file and then import it into QEM. Why is it that a free web service has a more streamlined way of working with my bank than a supposedly full featured, costly desktop program?

Go get MoneyWell instead!
http://nothirst.com/moneywell/

No I am not a spammer. I was just a long time Quicken user who was so fed up that there really wasn't competition that I had to keep using Quicken which was really bad. I stayed on the lookout for a better solution and am very happy with MoneyWell.

I tried out a bunch of different software including Cha-Ching, Mint.com, MoneyDance, iBank, even Microsoft Money via VMWare Fusion.

I was so impressed by MoneyWell that I joined their public beta team for the 1.4 release. A new major release of 1.5 just came out. It has some bugs common to a new release but Kevin the developer is very responsive with feedback etc.

So I know this sounds like total spam but honestly it is not. I want to see MoneyWell live a very long life and know that a good word goes a long way.

Seriously go check it out. The layout was quite different from Quicken so it will probably take your brain some adjustment but the different is so good.
A

BaldiMac said:
The point would be that some people don't trust all of their financial information to the cloud.

Mint is also currently missing the ability to enter manual transactions and scheduled transactions. And it handles split transactions rather poorly. Of course, Intuit has promised these features in the future.
Click to expand...

That being said, what is it about putting the application in the cloud that makes Mint free, while providing the same features as the Desktop app, which costs $70? Especially, since the dev costs are nearly the same, and the online app has running costs, which the desktop one doesn't. (not including upgrades/bug fixes, which both share).

I think Web firms have seriously devalued their product to the point where many of them provide useful features, but make no money (and Google has been a huge "help" in the devaluation).

Hardly anyone, except Google, Facebook and salesforce.com (which smartly enough did not devalue their services to $0) are making money online..

I guess I'll stick with MS Money and Parallels until Intuit get round to doing a proper job. If they ever do.

If there were a free trial (maybe there is and I just don't know it) and an iPhone app, I'd try it. Looks nice visually, and my needs are fairly basic. But I'm not paying $70 unless I can try it out and use it on my iPhone.
S

No investment tracking, no import to TurboTax. Completely useless to me. Epic fail.

Is there some reason that the software companies think no one wants a tool to manage their portfolio? Even Microsoft abandoned MS Money. And Intuit, well, they have always made crap anyway so this latest excrement shouldn't be a surprise.

So I run Microsoft Money 2003 in Windows via Fusion. How pathetic is that?

I switched from Quicken to ChaChing about 6 months ago. I would never be able to go back now. The ChaChing Mac and iPhone apps sync and work so well together. It is actually a joy to use.

I like the example screenshot. First off, the "person" has $200,000 in checking but only $4,000 in savings and investments (just seems kind of odd to me). And then after you do the math, figuring in $4000 of credit card + other debt, some how the net worth is only $45,000 (I guess this could be possible somehow). And then there is the pie chart. Health & Fitness (in purple) figuring in at 5% of last month's spending some how represents about 33% of the entire pie.

Maybe I am missing something here, but this doesn't appear to be a good screenshot example.