Just one week before Apple's annual Worldwide Developers Conference in San Jose, California, where the company is expected to introduce iOS 12, several graphic designers have created their own fanatical concepts.

The latest comes from Michael Calcada, a fourth-year design student at York University and Sheridan College in the Toronto, Canada area. 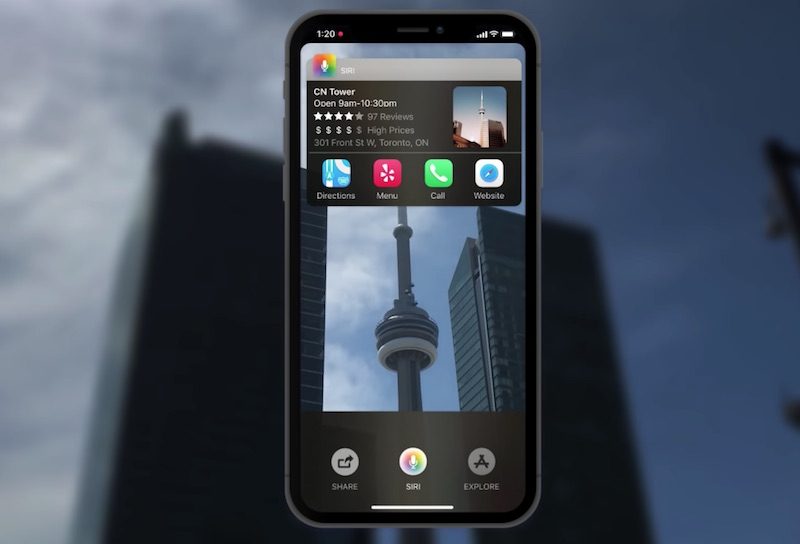 Calcada's concept envisions several changes and additions to iOS, including an all-new "Siri Sight" augmented reality mode with overlays of useful information on stores, restaurants, transit stops, landmarks, and other points of interest, in addition to timely information such as road closures.

"As I believe augmented reality is a technology that will be fundamental to the future of digital interaction, I integrated AR into the core of the iOS experience, providing new innovative and intuitive ways to interact with your digital and physical worlds at once," said Calcada, who shared his video with MacRumors.


Calcada's concept also envisions grouped notifications, a notification dot in the status bar, more granular controls in the default Camera app, a systemwide dark mode, FaceTime group chats, improved volume controls, and a general makeover to iOS that has some promise, even if it is not entirely realistic. 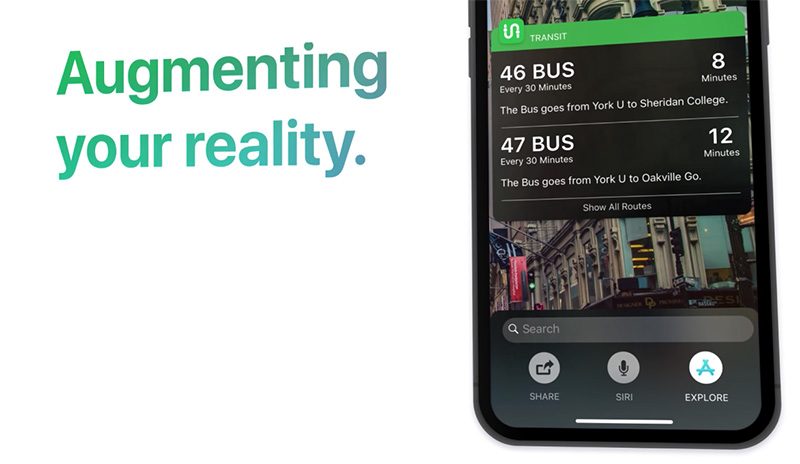 Any improvements to Siri would be welcomed, as multiple reports have suggested that Apple's assistant has fallen behind its rivals, including Amazon Alexa and Google Assistant. A recent survey also found early adopters of the iPhone X to be impressed with all of the device's major features, except Siri.

In terms of the expanded augmented reality capabilities, they could be be better suited for iOS 13, as rumors suggest Apple will release at least one iPhone with a triple-lens rear camera system in 2019. The triple-lens array would reportedly enable both expanded zoom and 3D sensing for augmented reality. 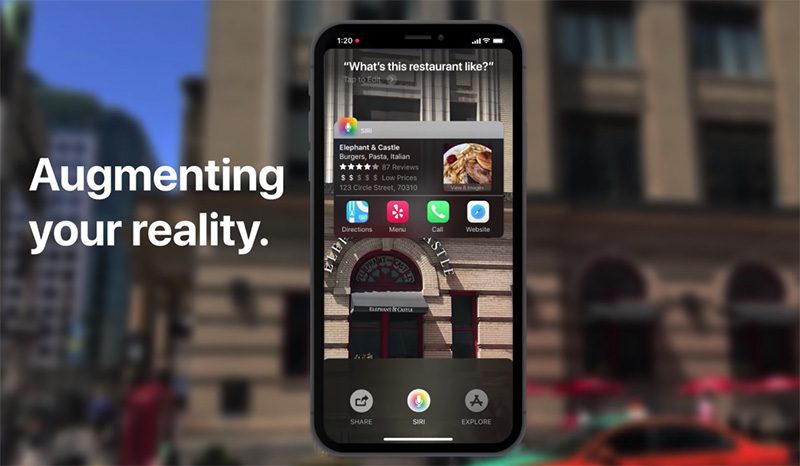 As with most concepts, this one is unlikely to look like Apple's actual version of iOS 12. But with only a week remaining until the WWDC keynote, which MacRumors will be attending, it's fun to look at fan-made mockups.

Stay tuned to MacRumors for live, on-scene coverage of the WWDC 2018 keynote on Monday, June 4, beginning around 8:30 a.m. Pacific Time.

Hopefully Apple put this much thought into iOS12. Because iOS11 (especially on iPhone X) seemed like an afterthought.
Reactions: johnmed
Comment

asdavis10 said:
Hopefully Apple put this much thought into iOS12. Because iOS11 (especially on iPhone X) seemed like an afterthought.
Click to expand...

iOS 11 was geared heavily to the iPad where it brought a lot of advancements.
Reactions: BvizioN, goobot, ILikeAllOS and 3 others
Comment
S

I'm here for this. Take my money.
Comment
Y

While there’s a lot to like in this concept. It proves to me that the botch was a better design decision than that awkward bezel. And so many of the executions were clunky and took away from the few simple elegant things iOS does well. Looked like a weird iOS skin trying to be android or vice versa
Reactions: ILikeAllOS
Comment
E

I think this is the best rendition I have seen. It takes what everyone has been asking about for years and also adds more. Plus it looks great without changing too much.
Reactions: Koalazub and TheTissot11
Comment
W

verniesgarden said:
While there’s a lot to like in this concept. It proves to me that the botch was a better design decision than that awkward bezel. And so many of the executions were clunky and took away from the few simple elegant things iOS does well. Looked like a weird iOS skin trying to be android or vice versa
Click to expand...

Thank you for explaining the meaning of a concept in far too many words...
Comment

He should have saved that concept for iOS 13 because we know damn well Apple won’t implement that many changes in iOS 12.
Reactions: Ghost31, WBRacing, Foxglove9 and 4 others
Comment

There are some nice ideas there. I'm sure we will see a few of them over time. Personally, I'm tired of the total flatness UI mandate of the last few years. I'd like to see a bit of texture added and more obvious control design language.
Comment

Some of the ideas aren’t too bad. But it looks absolutely atrocious and some of the execution is just awful. Here’s a list of errors/questionable choices I was able to pick out:
Yet some of the people complimenting this have almost certainly complained at some point about Apple not paying enough attention to detail in QC. Goodness.
Last edited: May 28, 2018
Reactions: Mr Verses, LCPepper, farewelwilliams and 2 others
Comment

Westside guy said:
It’s a nice concept... but I think first Apple needs to fix the existing incarnation of Siri.
Click to expand...

Exactly what I was going to say. Its not bad, but it needs work. I haven't tried other assistants, but I hear Siri is lacking. There hasn't bee a great, overhwelming amount of improvement since its release. Even something as routine as asking Siri to play a specific songs can be complicated when dealing with a large library with lots of similar/duplicate titles. Sometimes its easier to just manually select the song.
Comment

Awesome!!!
[doublepost=1527544493][/doublepost]Dude, what is wrong with You? It is an imagined concept. If you think you can point out so many "errors" why don't you do something better?
Reactions: NVD and Adam620
Comment

Awful!
Why does the "AR bar" (that's what I'm going to call it) take up a quarter of the top of the screen in the video?
Why did he redesign all the icons to look like cheap, cartoony icons you would find from someone who just made their second icon pack ever for XP and uploaded it in 2006 to Deviantart? Why is everything made of pastel colors? Speaking of icons and pastels, why did he change the Siri button to a static icon and used 2 different siri icons on the same screen; one that is white with rainbow colors and one that is square shapped, with a rainbow color background and a white microphone? Why did he add the ugly black bezel to the top to hide the notch when it just looks even more distracting, hence why Apple didn't go with that in the first place? I'm not going to bother with the rest.
About the only thing I like is the way he grouped all notifications from the same app together on the lockscreen and color coded their headers. And I guess the weather icon in the upper left of the lockscreen is ok...
Comment
R

HAD ME AT “GROUPED NOTIFICATIONS” I MISS IT SO MUCH. I DONT KNOW WHY APPLE TOOK THAT AWAY.
Comment

If you thought people were zombies now just wait until this becomes a thing, we're doomed.
Reactions: groadyho
Comment
J

Definitely some good and bad here. What I'm most struck by is how Apple has consistently refused to make the easiest and most in-demand changes year after year: still no grouped notifications, still no group FaceTime, and still stuck with the horrendous volume UI.
Comment
I

Quite like the idea of being able to choose ISO etc in Camera mode without having to revert to a third party app.

Some great ideas there; is/was there an app that has something similar to the AR concept? Think it was on Samsung phones at one time?
Comment
T

Hopefully Apple will just focus on making Siri function in the first place instead of doing gimmicky crap like this. I'm SO sick of Siri not knowing anything that I ask her or understanding any of my commands. She's just a braindead piece of junk that doesn't do anything correctly.
Comment