Apple's newest operating system, iOS 12, is installed on just over 10 percent of devices 48 hours after it launched according to data collected by analytics company Mixpanel. The data suggests customers are adopting iOS 12 at a slower rate than iOS 11 and iOS 10. 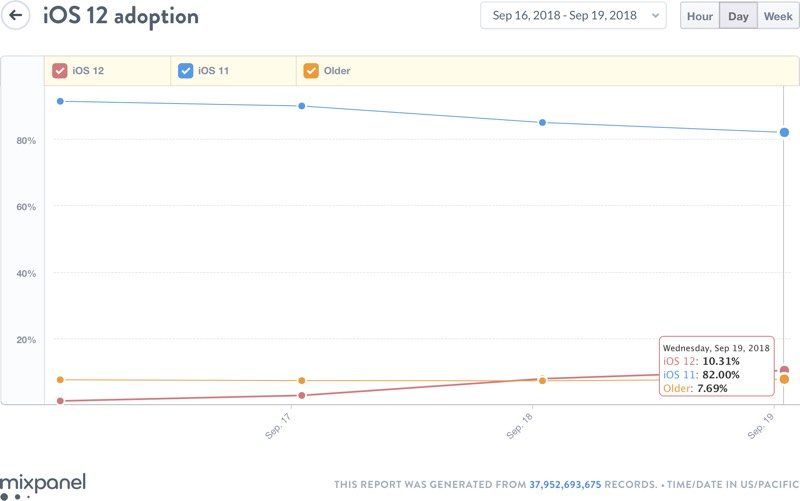 Customers may be reluctant to adopt a new operating system after all of the bugs and issues that were seen with iOS 11 software updates, but Apple made an effort to focus on the underlying code of iOS 12 and thus far, the update has been stable.

As should be no surprise, MacRumors readers are early iOS 12 adopters. Over 80 percent of readers queried so far have installed iOS 12 just two days after it launched. Follow us on Twitter and vote to let us know if you've upgraded to iOS 12.

iOS 12 is an update that brings significant speed and performance improvements to older devices, so most customers installing the software should see notable speed improvements over iOS 11 after updating.

Apple has made animations smoother and more responsive across the operating system, so accessing Control Center, scrolling in apps, or swiping up when multitasking feels more fluid.

iOS 12 also includes optimizations for when the operating system is under load. Apps launch up to twice as fast under a heavy load, as does the Share Sheet.

With iOS 12 installed on 10 percent of devices, iOS 11 adoption has dipped to 82 percent and will continue to fall as more people adopt iOS 12. Installation could jump this weekend as some people wait until they have a free block of time to complete a major software update.

iOS 12 is a free download that's available for the iPhone 5s and later, iPad mini 2 and later, and the 6th-generation iPod touch. In addition to noticeable and useful speed and performance improvements, the update introduces Screen Time for monitoring device usage, Memoji and new Animoji, ARKit 2.0, and a new Shortcuts app for creating customized automations. For more on what's new in iOS 12, make sure to check out our roundup.

Article Link: iOS 12 Installed on 10% of Devices 48 Hours After Launch

I usually wait until the .1 update but I was feely lucky and so far, so good on 2 iPhone X. After indexing it feels pretty fast and no problems so far. Being able to add a second Face ID is really useful.

EDIT: I did find a few minor visual bugs in the new Stocks app. I also don't know if I like the new format since you can't see as many in the list as you used to be able to (although the mini charts are nice).
Last edited: Sep 19, 2018
Reactions: martyjmclean

Android installs can barely hit 10% a year after launch.
Reactions: szabogabor10, t1meless1nf1n1t, ILikeAllOS and 38 others
A

if you have work email then chances are your employer said not to install it before they make sure airwatch and other services work
Reactions: BenGieCruz, NetMage and b1wils1

It's been 3 days! Why not carry out this research after 30 days?

I installed the day after release on my ipod touch 6. Definitely is faster, but there are a couple UI bugs I've noticed.

Hopefully 12.1 will iron it out. Nothing I'd call critical, just cosmetic, but it's annoying though.
Reactions: NetMage and arefbe

It seems the excitement over new iOS releases is decreasing, just as people are upgrading their phones less often. The last time I updated my iPhone to the latest release of iOS as soon as it was available was in 2014.
Reactions: deadlystriker, leventozler, elhungarian and 3 others
M

Weird -- I actually wasn't even aware it was available. I thought it was coming out next week. Well, off to upgrade...
Reactions: chakdey, MN7119 and ArtOfWarfare

Won't these stats be diluted on Friday with the release of the XS and XS Max preorders and later with the XR?
Reactions: JosephAW, zemsantos, yAak and 1 other person

Installed on iPhone 7 Plus on Monday evening. Feels faster, and my battery is definitely doing better, though that may be because Screen Time made me instantly super conscious of both how frequently I pick up the phone (despite knowing there will be no new notifications) and how much I check Instagram and other apps. Haven't noticed any bugs so far.
Reactions: flowave, mingravity, keysofanxiety and 6 others

First iOS update I have not been apart of for my iMac...I hope Y'all enjoy!
V

I have learned my lesson after the other 11 iOS updates: Wait. Don't update.
Reactions: flowave, pipis2010, JosephAW and 7 others

Yes, on all my iDevices except for my iPod touch. That stays on 10.3.3 until it dies.

Already upgraded my 6s and mini 4. I also upgraded both on day one for every release of iOS 11 and never understood the “iOS 11 is the worst” meme, though obviously some had issues with it, like any release.

I like iOS 12, very fast on both of my devices, the mini 4 especially. Nice improvements here and there.

I have had trouble selecting text with the text selection handles, though. It seems to be impossible to grab the selector at the end of the highlighted text block, or maybe I haven’t caught on to the new way to grab it.
Reactions: pipis2010, racerhomie and NetMage
B

Word will get out that this is a fantastic update for old and new devices. Great on my X and another 6S.
Reactions: ILikeAllOS, ikjadoon, borntrouble and 9 others

That's because Android updates aren't directly pushed out by Google to handsets like iOS updates are by Apple, but rather by handset manufacturers and carriers who are slow to roll them out due to different hardware configurations.

But you already knew that so your post is at best trolling.
Reactions: flowave, pmore, AstonSmith and 13 others

hetrigger said:
First iOS update I have not been apart of for my iMac...I hope Y'all enjoy!
Click to expand...

GadgetBen said:
It's been 3 days! Why not carry out this research after 30 days?

I can’t even blame those who hesitate to upgrade. iOS 11 was a disaster for many months. iOS 12 seems to be quite the opposite though. At least my X doesn’t feel like I’m using a 5-year old device lol
Reactions: imageWIS, iShater, ikjadoon and 2 others

Proudly still on 9.3.3 on my iPhone SE. Probably faster with better battery life than anyone else as I am jailbroken with Speed Intensifier and LowPowerMode set.
Reactions: FeliApple, JosephAW, agsystems and 1 other person

GadgetBen said:
It's been 3 days! Why not carry out this research after 30 days?

Why not do both?!

FYI: They are constantly collecting this data.
Reactions: ikjadoon

vicviper789 said:
I have learned my lesson after the other 11 iOS updates: Wait. Don't update.
Click to expand...

No problems after updating my iPhone 6s.

Most people aren't aware until they get that red badge notification, after a week. Pretty much the only people updating are 'techies.'
Reactions: ILikeAllOS, ikjadoon, DeutscheMark and 6 others
You must log in or register to reply here.
Share:
Facebook Twitter Reddit Email Share Link
Register on MacRumors! This sidebar will go away, and you'll see fewer ads.
Sign Up
Top Bottom