Earlier today, Apple released the third beta of iOS 7.1 to developers, which included both bug fixes and a number of visual changes that give several aspects of iOS 7 an entirely new look and feel. For example, the Phone dialer has been revamped with new buttons and several icons have had their color toned down, making iOS 7 less neon.

We've rounded up all of the visual changes that have been found in the iOS 7.1 beta thus far, creating an overview of what iOS 7 might look like in just a few months if the revisions make it into the final public release.

Keyboard: The keyboard in iOS 7 has been slightly revamped, adding a slight boldness to the font and a new design to the delete and shift keys. It also incorporates a somewhat darker, less yellow gray tone. Overall, the keyboard changes have the effect of adding contrast and making the letters easier to see.

iOS 7 keyboard on the left, iOS 7.1 keyboard on the right​
Icons: The green color in the Phone, Messages, and FaceTime apps has been toned down and is now darker, especially at the bottom of the icons. This introduces a less neon coloration to iOS 7, cutting down on some of the operating system's brightness. 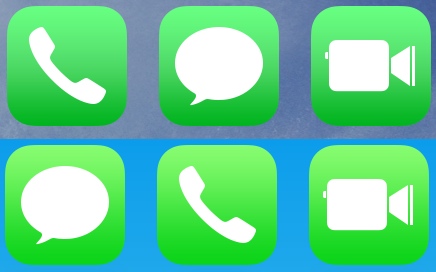 Darker iOS 7.1 icons on the top, brighter iOS 7 icons on the bottom​
Phone: The Phone app has seen the biggest changes, with a renewed focus on simple, circular buttons. The standard incoming call screen with rectangular buttons has been replaced with a black background and two round Accept and Decline icons. 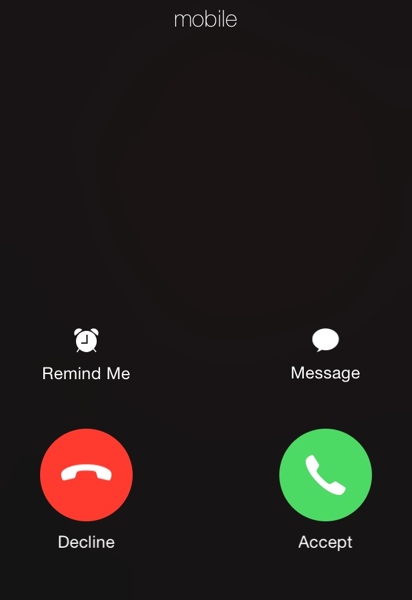 New incoming call buttons​
The "Call" and "End" buttons visible on the dialer have also been replaced with circular icons. 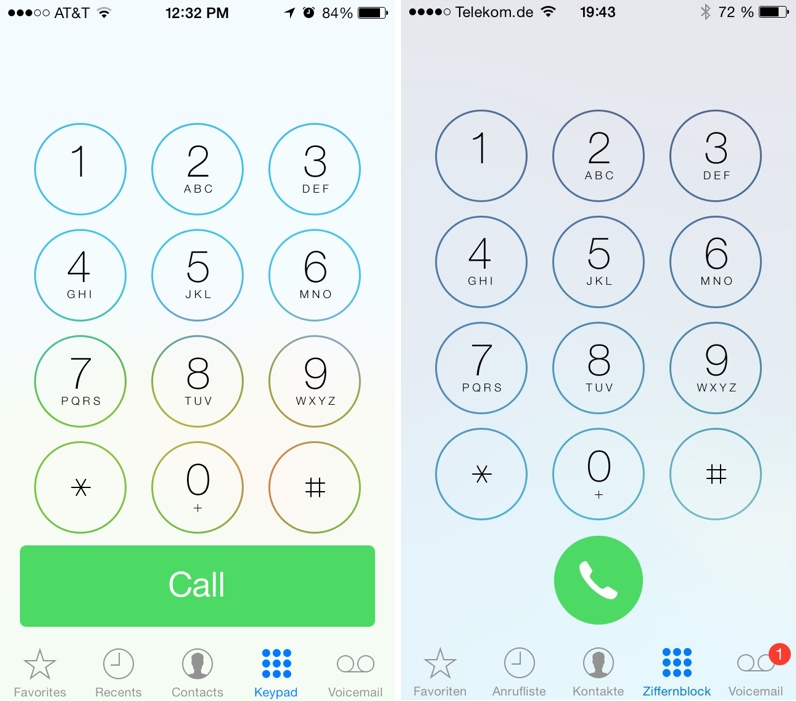 iOS 7 dialer on the left, iOS 7.1 dialer on the right​
Wallpaper: When selecting a new wallpaper, users can now choose to turn the parallax effect on or off.

Control Center: Control Center's brightness and volume sliders now maintain momentum when they are flicked, a new feature that fits in well with a previous bounce animation added in iOS 7.1 beta 2.

Shut down: The power off screen when shutting down the phone has a new look that does away with the red "slide to power off" and cancel tabs first introduced with iOS 7. The new design includes a power button icon at the top and a cancel icon at the bottom. 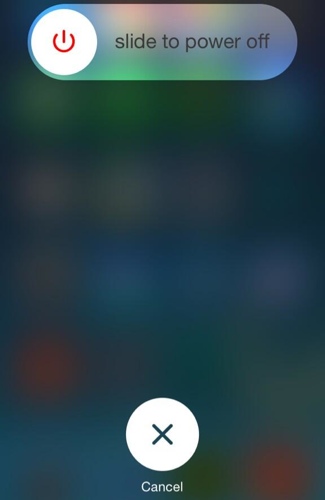 Slide to Power Off in iOS 7.1​
Accessibility: A New option has been added in the Accessibility's Contrast menu, allowing users to reduce iOS 7's white point. This feature joins both the "Button Shapes" and Darken Colors options that were added in an older iOS 7.1 beta.

Music: The Music app has new shuffle and repeat buttons that are more prominent, and iTunes Radio has a revamped "New" button.

iOS 7 buttons on the left, iOS 7.1 buttons on the right​
According to a recent report from BGR, iOS 7.1 may not make it to consumers until March, indicating that the software will see a lengthy beta testing period. Beta 3's release notes indicated a number of known issues that remain with iOS 7.1, suggesting that the update is not yet ready for the public.

those random big circles on the dialer and call screen give me OCD. seem so out of place and remind me of that horrible facebook home launcher on android ^^
R

and nobody thought apple could innovate!


seriously though these changes are so minor it's a joke.

Apple needs to take a cue from Google and push larger changes on a more frequent manner.

The "cancel" button on the "slide to power off" screenshot reminds me of the X from mavericks during the install process.
O

Got to see it in action, the animation/transition when you press it is subtle but awesome

Sort out the photos icon.

does it break the jailbreak?
K

get back to me when there's some news on stability and usability. seriously? a slightly different hue of green? unreal.

I personally like the older shaded buttons in the Music app...

What is with this? I feel like I missed something. Everyone has been talking about it, but the icon looks fine to me...?
N

Ok seriously they really don't need to spend time changing things just for the sake of change. How about lets go back to the old days where 0.1 releases actually added some good functionality. Now even major releases aren't even adding much and are focusing more on aesthetics which is a real disappointment
P

REALLY hate that shut off screen, very horrible to look at, looks like a cheap/rushed theme.
S

We've taken everything you've loved about iOS 7 and might it lighter. Made it brighter. This changes everything.
B

Nice changes. Definitely won't be enough to sway the people who still don't like iOS 7, but I'm not one of those people.
1

I have a feeling it's only the beginning of the design for iOS 8. it looks nice now but doesn't feel complete
T

Ew at everything.
T

I hope they fix Siri so that the entire screen doesn't get blurred when using it. I hate when I see a phone number that won't auto-highlight and I simply want to tell siri to call the number and then say it out loud. Used to work perfectly in IOS 6 until they did the entire whole screen blur...

I'm actually OK with all these changes. Nothing bothers me this time. Shocking! haha

Is the dialer no longer semi-translucent or does the one of the right just have a different background image?

That new shift key could prove rather confusing at first.
R

Apparently no one who has ever worked in making UI aesthetics has ever heard the saying "change for change's sake" and how it is often unnecessary.

A few month long beta to introduce circles over rectangles...is there honestly not more important products or problems these people could be working on?
R

Anything about iOS optimization for iPad ... I thought not ... and the Apple gurus want to come out with a 12" plus iPad ... without optimization.

Once again, Apple, ahead of the curve.

Really nice improvements. I'm happy with the way 7.1 is developing.

All I want is a stupid dark keyboard that apple has already made!!! Thats it I don't ask for that much so just give it to me please.