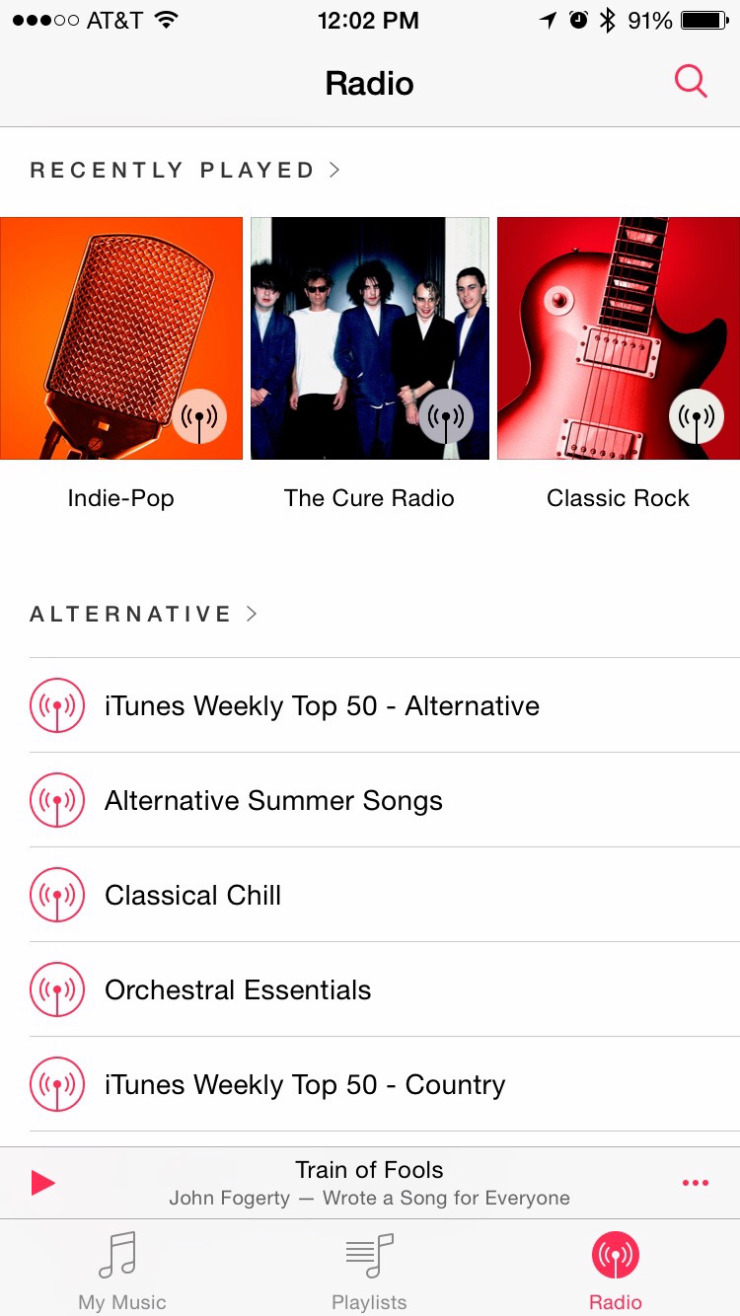 - New per song indicator flags, noting when tracks are stored locally on device.

- Artists will more than 3 albums will now show a sub album folder display instead of all the songs.

- iPads in landscape now have side-by-side panes for playlists. Lists are on the left and artwork is on the right.

- When you are in an album, you can now tap the artist's name to take you to their artist page on your device.

- On iPads, the scrub bar and track info bar have flipped places in the Control Center.

- Music Playback issue where songs would quit playing if anything other than the Music app was opened has been *FIXED*. Even with Bluetooth playback devices.

- Fly-in from lock screen slower then in beta 2

- Tearing in Music.app when music player was pulled down has been fixed on iPhone 6 Plus

- Videos aren't counted as songs anymore in "General - About"

- Trying to send an error report in Maps crashes the app

- Some songs are still doubled up in Smart Playlists. Tapping on the double entry will not do anything.

- Using Siri to control iTunes Radio does not work in this beta.

- Home Sharing and Genius Mixes are not currently available.

- AirPlay streaming may not work.

- There may be stability issues when using Up Next or iTunes Radio.

- Station sharing for iTunes Radio is not available.

- The iTunes Radio tab may unexpectedly appear within Search, even if iTunes Radio is not available in your country.

- Deleting an empty playlist may cause the Music app to quit unexpectedly.

- The Music app may forget its place when you go to the Home screen and come back.

- If your device loses and regains a network connection (including turning Airplane Mode on and off), playback may stop working. If songs
repeatedly fail to play, please force the Music app to quit.

- Its not possible to add all songs in a compilation to a playlist at once.

- Closing full screen music video playback while the device is in landscape may cause the app to display incorrectly.

- Ads in iTunes Radio may display on top of Up Next.

- If your library has no playlists, the add playlist button may not appear.

- The downloaded icon is not displayed in Songs view on the iPad when you select Make Available Offline.

Siri
-Using Siri on an Apple Watch to request playback of a song will fail.

Workaround: Request playback of Artists or Albums instead of a specific song.

Videos
- It may not be possible to dismiss the captions dialog on iPhone 6 Plus.

- Signing out of an iTunes account and signing into another may result in incorrect content appearing in the library.

- Content stored in iCloud may not appear in your library after signing in.

- Creating an animated image using the UIImage method animatedImageWithImages:duration: and then playing the animation using startAnimating ignores the duration and plays back as fast as possible.
Workaround: Workaround: Use startAnimatingWithImagesInRange:duration:repeatCount: instead.

The radio section appears to point to a possible redesign of the app. The fonts in use don't match anything else at all.
Comment
A

Looks like Music continues in the background with bluetooth devices.

I can switch to Waze, switch to mail, standby my handset, etc etc and music continues as it should.
Comment
M

- Most songs would still fail to indicate whether they are on the device for iTunes Match users.
Comment

Does music show up even with show all music off for those who were effected by the bug?
Comment
J

Music stored on the iPhone and downloaded with iTunes Match would not show in the Music app on Beta 2 unless you turned on "Show All Music" in settings is fixed.
Comment

And 'All Music' on device toggle in settings.app works now. Will show music on device vs a blank library. 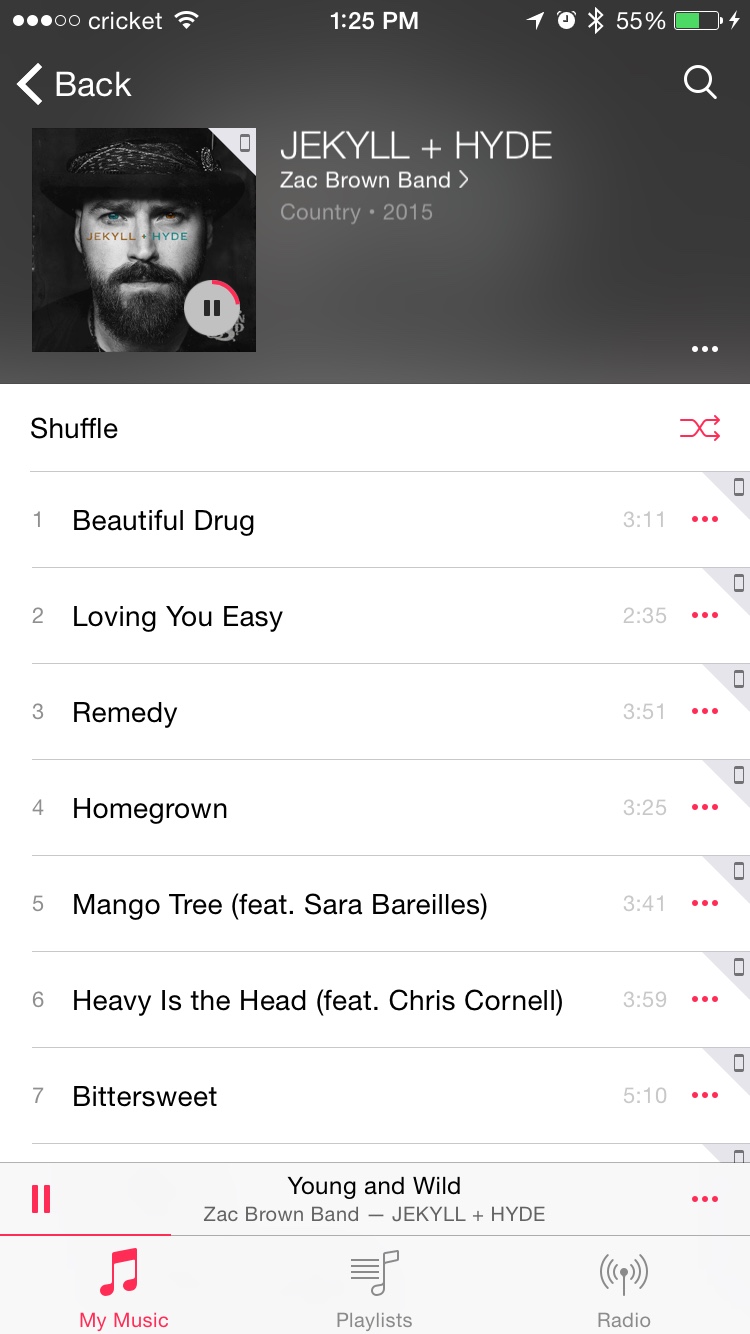 The Doctor11 said:
Does music show up even with show all music off for those who were effected by the bug?
Click to expand...

Ha yes it is fixed as my post above

Not sure if new, but I don't remember seeing this in Beta 1 or Beta 2: 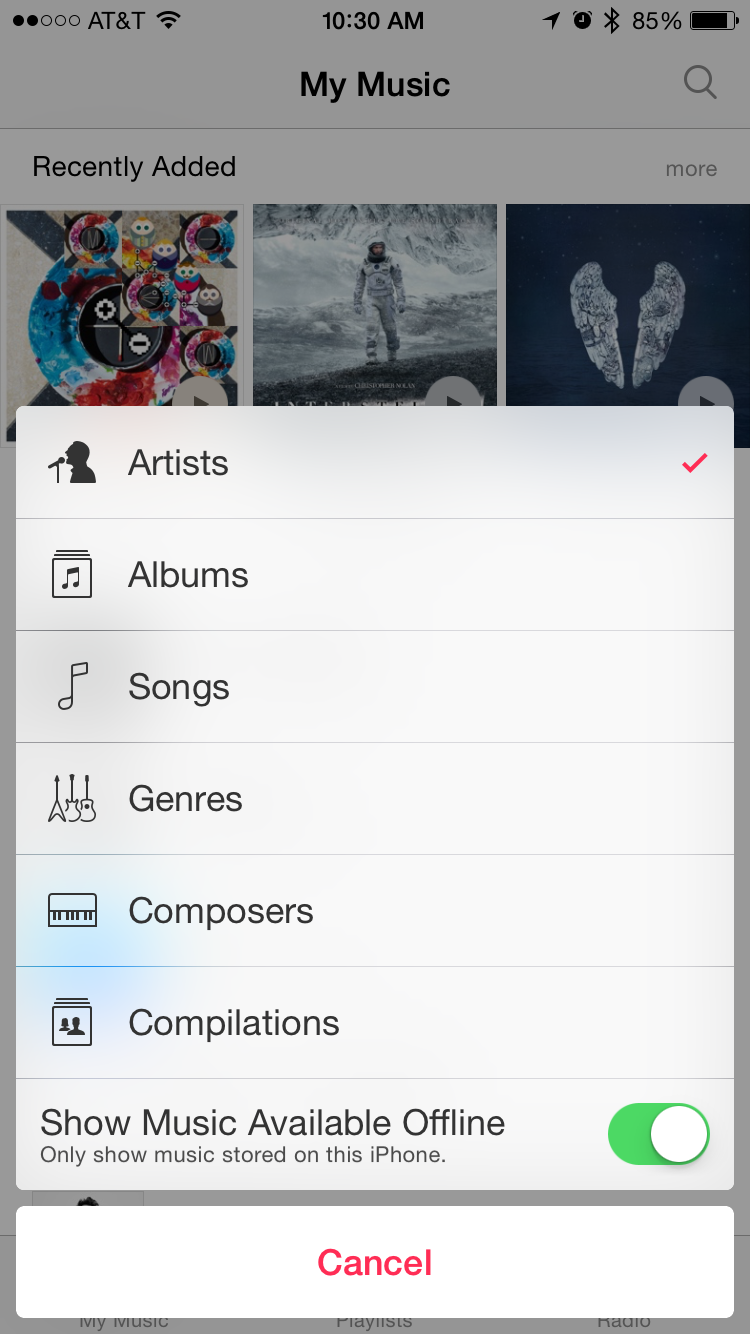 I take it you have to be running beta 2 for beta 3 to show up OTA?
Comment

DeathBecomesMe said:
I take it you have to be running beta 2 for beta 3 to show up OTA?
Click to expand...

New animation for when you click to see up next from the now playing screen. Very slick.
Comment

So I guess now, removing the ability to view lyrics is not a bug but a "feature", thanks Obama.

jbmacfan said:
Ha yes it is fixed as my post above

Not sure if new, but I don't remember seeing this in Beta 1 or Beta 2:

SWEEEEEEET
They always needed this as faster access. I always thought it was clumsy having to exit back out to the home screen -> settings.app.
Comment
T

FatPuppy said:
So I guess now removing the ability to view lyrics is not a bug but a "feature", thanks Obama.
Click to expand...

Putting any political views aside, I always find it hilarious when people use the "thanks Obama" line when the situation is not political in nature. Cracks me up.
Comment
P

Great as always. iPhone 6+, 8-11 hours SOT depending on usage patterns.

Also, guys, the UI tearing in the music app for the iPhone 6+ has been fixed and you can now start recently played stations again. I added this to the first post.
Comment

Scrolling through artists, albums or songs is still laggy. Also, when expanding a city in the weather app is still... well... you already know the answer to that.
Comment
J

DeathBecomesMe said:
I take it you have to be running beta 2 for beta 3 to show up OTA?
Click to expand...

This never changes. You always have to be on the latest beta to see the next beta show up OTA, if I'm not mistaken.
Comment

FatPuppy said:
Scrolling through artists, albums or songs is still laggy. Also, when expanding a city in the weather app is still... well... you already know the answer to that.
Click to expand...

Uhhhhh. Damn it! They really need to get on that.
Comment
J

artists have sub album folders now instead of a long list of songs. if u have more than 3 albums of the artist that is
Comment

bushido said:
artists have sub album folders now instead of a long list of songs. if u have more than 3 albums of the artist that is
Click to expand...

Haven't people been asking for this for a while? Good news!
Comment
S

dannyyankou said:
Haven't people been asking for this for a while? Good news!
Click to expand...