A few years ago, a number of users in Australia were victimized by attackers remotely locking iPhones, iPads, and Macs using Find My iPhone on iCloud. Compromised devices typically displayed Russian ransom messages demanding payments of around $50 to $100 for the device to be unlocked. 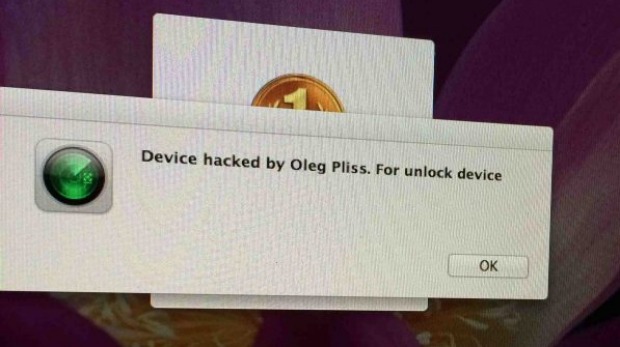 A ransom message targeting a Mac in 2014 with the common pseudonym "Oleg Pliss"​
At the time, IT security expert Troy Hunt noted that the attackers were likely using compromised emails and passwords exposed from various online security breaches to log in to iCloud accounts. AOL and eBay, for example, were among several high-profile companies that suffered data breaches in 2014.

Apple later confirmed that iCloud was not compromised, and that the eventually-arrested attackers had instead gained access to Apple IDs and passwords through external sources. Russian website MKRU said the attackers obtained the credentials via phishing pages and social engineering techniques.

Since then, CSO security blog Salted Hash has discovered that, since at least February of this year, these ransom attacks have returned and now target users in the U.S. and Europe. The methods used by attackers are said to be the same ones used in 2014, starting with a compromised Apple ID.

It starts with a compromised Apple ID. From there, the attacker uses Find My iPhone and places the victim's device into lost mode. At this point, they can lock the device, post a message to the lock screen and trigger a sound to play, drawing attention to it.

In each of the cases reported publicly, the ransom demanded is usually $30 to $50. If a victim contacts the referenced email address, in addition to payment instructions, they're told they have 12 hours to comply or their data will be deleted.
Click to expand...

The website shared screenshots and linked to a number of Facebook, Twitter, and Reddit users whose devices appear to have been held for ransom in recent months, but there is speculation that the problem could be much larger than that. The following excerpt is highly questionable, however, and could very likely be incorrect.

Earlier this week, a security professional posted a message to a private email group requesting information related a possible compromise of at least 40 million iCloud accounts.

Salted Hash started digging around on this story after the email came to our attention. In it, a list member questioned the others about a rumor concerning "rumblings of a massive (40 million) data breach at Apple."

The message goes on to state that the alleged breach was conducted by a Russian actor, and vector "seems to be via iCloud to the 'locate device' feature, and is then locking the device and asking for money."
Click to expand...

The report adds that "for now, let's assume there hasn't been a massive iCloud data breach." Apple has not commented on the matter.

Given that the Apple ID credentials involved in the ransom attacks are believed to originate from online security breaches, Salted Hash pointed towards a recently compromised Mac-Forums.com database, which allegedly includes 291,214 accounts, being sold for around $775 on the darknet.

There is currently no evidence to suggest that the Mac-Forums database has any relation to these ransom attacks, but users with an account on that website should change their passwords out of an abundance of caution. Setting a device passcode and enabling two-factor authentication for your Apple ID is also highly recommended.

Apple has a support document outlining steps to take if you think your Apple ID has been compromised. Also read security and your Apple ID.

AOL and eBay, for example, were among several high-profile companies that suffered data breaches in 2014
Click to expand...

Until world governments update their laws to throw the book at ANY hacker, and users smarten up and start using passwords other than "password", this kind of crap will continue.

I know, neither thing will ever happen, and I'm just being an optimist...
Reactions: attila, St.John Smith, JackRipper and 3 others

Apple under Tim Cook is slipping...
Reactions: Four oF NINE, Mr. McMac, Cisco_Kid and 12 others

The other option is for big companies to accept these problems. I like that Google has two-factor auth by default and doesn't allow password reset using security questions alone. Apple needs to do this too.
Reactions: upnorth85, ron7624 and Sasparilla

Just use different passwords for all your accounts. But I share and recycle passwords between PayPal, eBay,gmail and so forth...laziness is costly I suppose
Reactions: Mr. McMac, Shirasaki, ABC5S and 2 others

There lies the problem when everything in the Apple ecosystem is now linked by Appleid . It's a real shame as many users use the same email / password for many websites / services .
Reactions: Moorepheus
A

Well at least the internet having "darknet" gives something over iOS 10 not having darkmode thus far.

I've got an idea! Let's start reading articles instead of making baseless comments after glancing at a headline. Deal?
Reactions: LizKat, Keane16, St.John Smith and 30 others

The issue here is what you can do once you acquire the password. You need to be active with things like two step authentication ....assume that any password can be compromised.
Reactions: Deelron, spinnyd, H3boy and 1 other person
A

Liken to slipping on a banana under One's foot.
Reactions: Ghost31 and mdelvecchio

This sort of thing makes me wonder why companies have not latched on more vigorously to things like touchID. I can not just impersonate that over the phone in a far off land. I have to get into your secure enclave or have your physical phone. This is the direction everything needs to go.
Reactions: jayducharme, macguru212, spinnyd and 4 others

I had someone trying to hack into my iCloud account for the first time the other day. IDK how far they got, but my account was locked. I had two-step turned on, which probably helped. I changed my password just in case and then learned how to setup two-factor authentication, which is supposed to be a little better than two-step because it uses a six digit code and I think it won't even let them start trying codes until you approve from your device (also shows a map) and then it generates the key. Interesting to note, however, that it showed my Apple TV being hundreds of miles away in Chicago, IL when I re-authenticated it to get my Schlage Sense deadbolt to connect to it for remote HomeKit access.

Does anyone know what would cause an iPhone to never receive security codes? They come through fine in texts and in device codes sent to my iPad and Macs, but device codes never come through to my iPhone. It didn't work with two-step, and it still doesn't work with two-factor. I had even mentioned it in passing to Apple support (I was working through an iCloud data sync glitch with photos in Notes that used a ton of LTE data a few weeks ago) and they couldn't ever figure out why I wasn't getting them. It seems to have started a few months back at some point between February-April.

What does Tim Cook have to do with people using weak passwords, using the same passwords between accounts, not changing them regularly, ect. ?
Reactions: Keane16, Deelron, The Deepness and 24 others

Kaylor said:
What does Tim Cook have to do with people using weak passwords, using the same passwords between accounts, not changing them regularly, ect. ?
Click to expand...

He could send them an email gently reminding them to change passwords every now and then.
Reactions: Goatllama, Benjamin Frost, mdelvecchio and 1 other person

TFA must be universal.

Also, this would be a good use of military commandos. Zero in on these guys and exterminate them. And yes, I'm serious.
Reactions: smoking monkey
T

Go ahead erase my Angry Birds apps.
Why would anybody keep important data on their iPhones without backing them up?
Now, if they hacked dropbox, I'd have a problem.
Reactions: dewski
M

No amount of innovation can fix human stupidity.
Reactions: macguru212, spinnyd, ILikeAllOS and 4 others

Use a different (and long) pword than any other account for your AppleID, make sure your security questions can't be answered by looking stuff up on the internet or intelligent guessing and enable 2 factor authentication.
Reactions: spinnyd