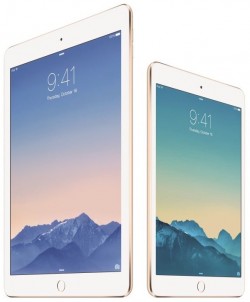 With the iPad Air 2, one of Apple's main selling points has been the improved display, which includes a new bonded construction that eliminates the air gap between the display and the cover glass, as well as a new antireflective coating to reduce glare in situations with high ambient light.

Ray Soneira of DisplayMate Technologies has now put the new display to the test, finding that the antireflective coating is indeed a significant improvement for the iPad and a major step above competing tablets, but in overall performance competitors are still doing better than the iPad. Apple receives only minimal credit for the bonded display, as it is mainly catching up with competitors on that aspect.

A major innovation for the iPad Air 2 (that is not fully appreciated) is an anti-reflection coating on the cover glass that reduces ambient light reflections by about 3:1 over most other Tablets and Smartphones (including the previous iPads), and about 2:1 over all of the very best competing Tablets and Smartphones (including the new iPhone 6). [...]

However, other than the new anti-reflection coating and bonded cover glass, the display on the iPad Air 2 is essentially unchanged and identical in performance to the iPad 4 introduced in 2012, and is actually slightly lower in performance than the original iPad Air (for example 8% lower Brightness and 16% lower display Power Efficiency) - most likely the result of an obsession with producing a thinner Tablet forcing compromises in the LCD backlight.
Click to expand...

With competitors such as Samsung, Amazon, and Microsoft offering better color accuracy, viewing angles, and power efficiency, Soneira finds the improvements in the iPad Air 2 insufficient to move the device to the top of his tablet display rankings, and the Samsung Galaxy Tab S retains its number one position.

Moving on to the iPad mini 3, Soneira unsurprisingly finds that the display is unchanged from the one used in the previous generation, unsurprising given that Apple kept the specs of the iPad mini identical with the exception of the Touch ID home button and a gold color option. Soneira notes the unchanged display is a "major disappointment", as the iPad mini 2's display has been rated poorly for color gamut and accuracy.

In 2013 the mini was given a Retina display, but remained with a reduced 62 percent Color Gamut - the only current iPad or iPhone without a full Color Gamut. Now, in 2014 the new iPad mini 3 still only has a 62 percent Color Gamut, plus it was denied the new enhanced anti-reflection coating and bonded cover glass of the iPad Air 2.
Click to expand...

Soneira again points to competitors offering higher-quality displays on their tablets, concluding that the iPad mini 3 is "embarrassingly mediocre and way overpriced" considering its $399 starting price tag and significantly poorer display performance compared to both competitors and the iPad Air 2.

Full details on Soneira's testing of the new displays are available in his extensive report.

The iPad mini to me clearly compromises Apple's "we want to make the best product possible"-incentive. Don't know how I feel about that.
W

The Displays are good.

Just not as good as the new iPhone 6 screens, which is kind of disappointing.

The iPad Mini screen literally looks to me like garbage. That color garmut is just really, really horrible, it almost looks like some kind of filter was applied on the screen

This obsession with thinness is out of hand.

It's unfortunate that they didn't put the same updates into the Mini. Would've bought one instantly. Touch ID just isn't enough to upgrade.

Really how difficult would it have been for Apple to rev the mini and add:

Most people would probably have been happy with that....but instead they are treating it like the iPod.

The need for iPad Mini 3 decreased significantly with the introduction of iPhone 6 Plus and thinner, lighter iPad Air. And looks like apple lost faith in it too.
J

I love my Air 2 but I feel sorry for those who were looking forward to a decent Mini 3 that were let down big time by Apple.

Real shame about this, which seems to be another issue added to Apple's growing list of half-assed product updates. It's saddening because you can feel they're getting complacent. In an ideal world they'd give every product the best possible update so that people feel the full benefit of the 'flawless Apple experience' that they can't stop talking about.

I'm really losing a lot of love with Apple recently.

I think people underestimate the resources of Apple...they only focus on a few things at a time. That's why they should reduce the amount of products they have.

The iPad Mini 3 was intentionally shafted as it's quickly become the show-stopper iPad everyone wants. They could have easily given it the A8, ect.

Why would someone buy the iPad Air, if the Mini has the same processor, same resolution, same performance, and is $100 cheaper?

Loving my air 2. Display is great, I don't really see the need for any higher resolution than this unless it doesn't compromise battery life like it does with many other devices. Ditching my mini 2 and upgrading to this was a breath of fresh.....air


Dwalls90 said:
The iPad Mini 3 was intentionally shafted as it's quickly become the show-stopper iPad everyone wants. They could have easily given it the A8, ect.

Why would someone buy the iPad Air, if the Mini has the same processor, same resolution, same performance, and is $100 cheaper?
Click to expand...

That's what I did last year when the retina mini 2 and first iPad air were announced with the exact same specs. I liked the portability of the mini 2 without sacrificing specs of the bigger brother, but this year my 6+ has taken the place of the portable phablet.

Wiesenlooser said:
The Displays are good.

Just not as good as the new iPhone 6 screens
Click to expand...

Or the displays used by certain competitors on their directly competing products.

Just as well for Apple that the overall user experience is still the best.
J

Dwalls90 said:
The iPad Mini 3 was intentionally shafted as it's quickly become the show-stopper iPad everyone wants. They could have easily given it the A8, ect.

Why would someone buy the iPad Air, if the Mini has the same processor, same resolution, same performance, and is $100 cheaper?
Click to expand...

Of course the new Mini still lags behind, it's basically last year's with a couple of minor changes.

The anti-reflective coating is definitely noticeable side by side. The original Air looks like a mirror, with the display off, while the Air 2 still shows outlines of things but far less detail and less bright.

In the real-world with the screen on it seems slightly better, the main problem is the backlight gets overpowered by the sun.
B

Amazing how they introduce a product category and abandon it within 2 years. $399 for the Mini 3 is a joke, and their reluctance to improve the product is contemptible.
T

There's very, very little point in getting the iPad mini 3 when the iPad mini 2 still exists.
What the hell were Apple thinking releasing such an incredibly mediocre update?
K

Crosscreek said:
This obsession with thinness is out of hand.
Click to expand...

I disagree. I upgraded from the Mini 2 to the Air 2 and like the thinness. It makes a difference with the overall size of the device and how it feels in hand. I tried the original Air last year but went with the Mini 2 as it was essentially the same apart from the display.

I normally rush out to buy each new iPad, and for the first time I'm skipping one. I don't understand Apple's approach these days. WTF happened to leading a category, not simply "catching up to the competition"??

MacFather said:
264 ppi is out of date. I can see individual pixels.
Click to expand...

And here come all the gamut trolls to join the "party."
K

TheWelshBoyo said:
There's very, very little point in getting the iPad mini 3 when the iPad mini 2 still exists.
What the hell were Apple thinking releasing such an incredibly mediocre update?
Click to expand...

I'm surprised it didn't at least get the A8, but otherwise was not surprised given that the rumors from Ming-Chi Kuo that the mini was only getting minimal updates. My guess is that the mini 3 will appeal to those who need 64GB of 128GB of space and want Touch ID. The 64GB mini 3 is still $100 less than what Apple was selling the Mini 2 at that capacity before the launch. And Touch ID is very convenient. I'm guessing that the A7 is powerful enough for most iPad users, but agree that the A8 would have provided a psychological "justification" for the higher price.

Perhaps we'll see a more substantial update next year, or even mid-cycle, though I'm guessing that the iPad mini will likely remain a generation behind the iPad Air (i.e. 2013 was the exception, rather than the "new normal"). So perhaps the mid-2015 iPad mini 4 will sport an A8 (not the A8X) and a bonded screen with improved gamut, the mini 3 will drop into the $299 slot, and the mini 2 will be offered in a single capacity at $249.

Apple moves in mysterious ways. Goodness knows what they were thinking with the Mini 3, but it probably has something to do with maximizing sales of the Air 2. Once they have a nice impressive "x million sold" slide for the next keynote, I'm sure the Mini will quietly catch up.