A short time ago, we highlighted a new benchmark appearing to show an iPad Air 2 device carrying an A8X chip with a triple-core 1.5 GHz processor and 2 GB of RAM.

While we mentioned that the enhanced specs have led to huge performance gains compared to the A8 chip found in the iPhone 6 and 6 Plus, Primate Labs has now published a nice pair of charts showing just how dramatic this improvement really is, making the iPad Air 2 far and away the fastest iOS device ever. 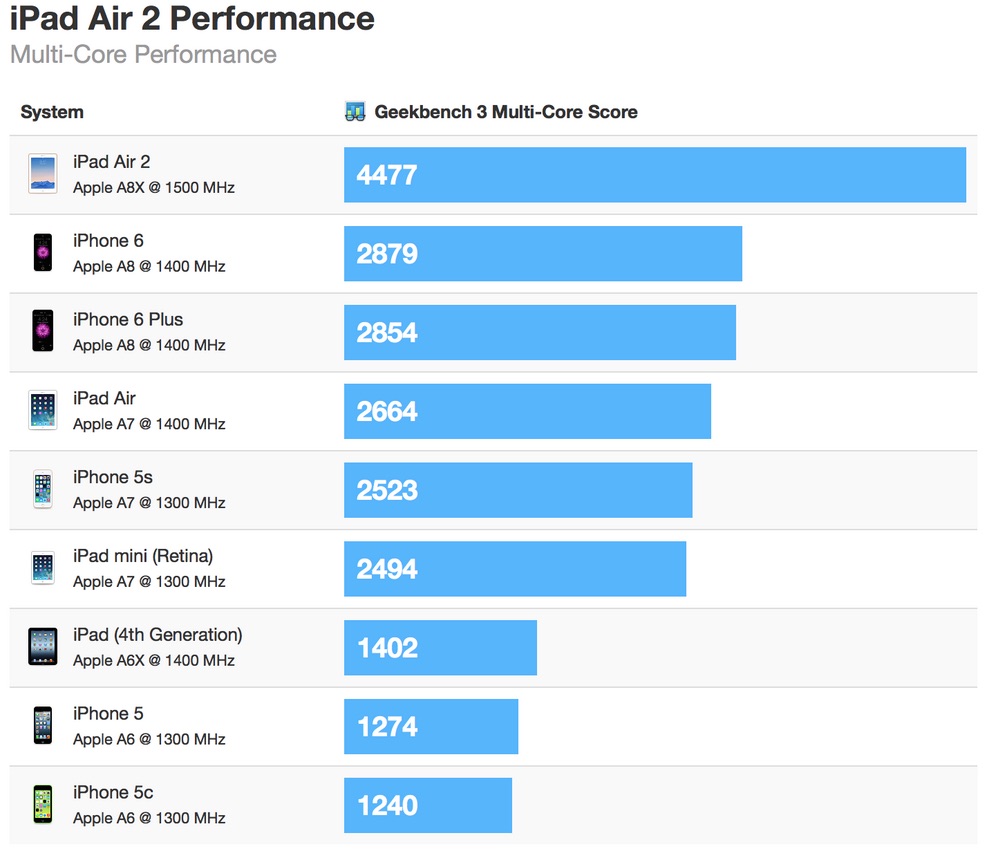 The iPad Air 2 also sets new high scores in the single-core benchmarks thanks to the 1.5 GHz cores in the A8X, with much of the nearly 13 percent gain over the A8 coming from the 100 MHz speed improvement compared the 1.4 GHz cores found in the iPhone and 6 Plus. The iPad Air 2 of course also compares favorably to the original iPad Air, with single core scores up 23 percent. 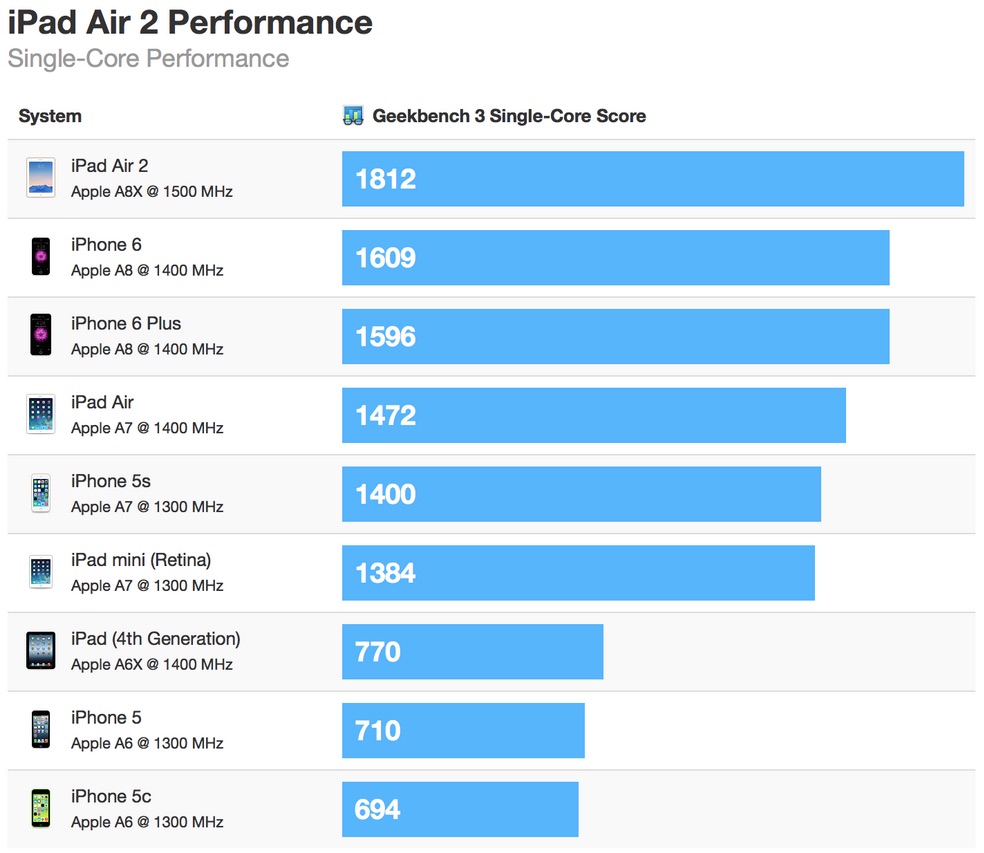 While my iPhone 6 gently weeps
R

Oh they'll find a way to make it lagtacular. Just you wait.
N

That is quite impressive.
Reactions: Billy95Tech
M

Honestly, at this point, what does one do with this power? Makes me wonder if it's going to be used in some yet to be announced products.
I

Irrelevant if you can't even multi-task with it.
J

Oh how i wish they put this package into the iPad Mini too Would have been such a beast.
D

My iPhone 6 is a total piece of junk.

Holy crap. Looks like I'm taking a trip to the Apple Store to test this BEAST out.

I really hope that means it's really future proof.
A

profets said:
Honestly, at this point, what does one do with this power? Makes me wonder if it's going to be used in some yet to be announced products.
Click to expand...

CAD (Computer art design) etc, they showcased some really powerful applications running in real time on the iPad Air 2 at the event, it was amazing, this thing is a total beast
Reactions: Billy95Tech
S

What impresses me more than raw performance is the _improvements_ to mobile performance year to year.

Computers do not get THIS much faster every year. We're lucky to see 3-8% increases.

If you extrapolate just a few years ahead, the future of mobile will unlock completely unprecedented possibilities. That's pretty neat. I honestly don't yet know how all this power can be used yet, but that's an interesting problem to have.

Can't wait for the A9 in the iPhone 6s! This confirms it will be a significant step up from the 6 like the (s) models usually are.
E

This kind of crunching power in an iPad seems useless for now and probably for a while.

Are they just ramping up their ARM CPUs to the point where they can compete with the low end of Intel's offering? The objective could be to reach a point where an Macbook with an ARM CPU running OS X would be feasible...
Z

I am baffled as to how they're managing this performance with the same battery life and a significantly smaller battery (down from 32.4 Wh to 27.3 Wh).
Reactions: Billy95Tech

Crazy fast, will definitely keep my iphone 5, as I will wait for 6s!!!

To put it into perspective, those scores for multicore is higher then some of the macbook pro release in 2010 !!
http://www.primatelabs.com/blog/2010/04/macbookpro-benchmarks/

Hot damn at those scores