Hello everyone,
I am a happy iPad Pro user, I do a lot of visual work and the Pencil support in itself for me justifies the purchase. I also work a lot with desktop apps that have no equivalent on iPad (like After Effects), so my combo is iMac + iPad (and a laptop for when I'm on the road).
These last weeks I've been reading a lot about this so called 'ipad as a laptop replacement' debate, and - while it doesn't affect me directly - I've started to think about it, and I've made a little experiment.
The easy test, I thought, would be to just pick a task that I need to accomplish for work and - without much preparation - just execute it on iPad. So I did.
My task was to update a Wordpress website (create posts, upload images and so on), and quickly edit some source code.

So I propped up the iPad, connected my wireless bt keyboard (a Logitech Keys to Go) and started working: split screen with Safari and the email with update instructions did it quite easily, although there were a few slowdowns (I had to save the images - one at a time! - first from the email to either photos or icloud drive, and then upload them again one at a time), but nothing major as they were just five or six.
Code editing was also super easy with Coda and overall I didn't feel I spent more time than usual or that somehow the whole process was much of a drag compared to when I do it on the desktop.

The biggest learning - which I was very aware of from my studies back in the day, but have never really experienced so far - was in terms of ergonomics.
The classic desktop physical layout lets you rest your hands on the keyboard and when you need to precisely point something (like a specific form field somewhere on the screen), one typically just pivots the hand on the elbow for half a second and rest it again on the mouse, and then back again resting on the keyboard.
This is a very economical setup that basically has no impact on your muscles.
On the other hand, just 30 minutes of working on the suggested 'iPad + keyboard setup' (after all even if I used a third party is the same orientation apple uses with the Smart Keyboard), I was experiencing the classic symptoms of the infamous "gorilla arm syndrome": a soreness in the forearm muscles due to intermittent and frequent raising of the hands to select something on screen. It's a very famous ergonomic concept and also why we'll never have minority report-style interfaces in real life...
My feeling was that this was made worse by the fact that I had to control very carefully my forearm when tapping on screen because I didn't want to make it fall down on its back and I didn't want to see the screen rocking every time, so I had to move slower and spend more time with my arm in the air. And then sometime the target on the page was too small and I didn't get it right the first time, so even more back and forth, more gorilla feeling.

As I said I wasn't really surprised, this isn't anything new.
What I started thinking, though, is that maybe the current approach is not the best one, and it's like that just because it tends to imitate a laptop. Maybe there is a way to set up the iPad so that one can achieve a similar economy of movements as a desktop + mouse setup.

The first thing I did was taking care of the 'rocking screen' problem: how to avoid having to slowdown and carefully touch it to select something. So I put the iPad on the 'low' position, not completely flat and well supported by the cover. In this way I didn't have to care much about the force with which I tap the screen.
As an added benefit, there is much less road to do for my forearm, as I don' really have to raise it a lot more than I do to go from keyboard to mouse (reaching the far side of the screen on my iPad 12.9 is a bit of a challenge though).

So in this first experiment, the ipad is in the 'low' position and the keyboard is in front of it. No more careful tapping and less gorilla arm, but still not ideal, because I still could not rest my elbows on the desk to reproduce the laptop setup that minimises work by allowing me to pivot on the elbow.

This alleviates much of the gorilla arm problem, although there is a bit of a disorientation because we're so used to have the keyboard between us and the screen that we instinctively look up to check what we're writing, and in this setup one has to look down.
The other problem is that this setup takes quite a bit of space more when compared to a propped up ipad + keyboard, although the benefits in terms of ergonomics are - in my experience - very much worth the real estate.

I'm not even sure why I went on and wrote this, but I'm convinced a lot of people look at the ipad replacement problem without caring too much about ergonomics details such as these... what do you think?

Here below a of sketch of the concept 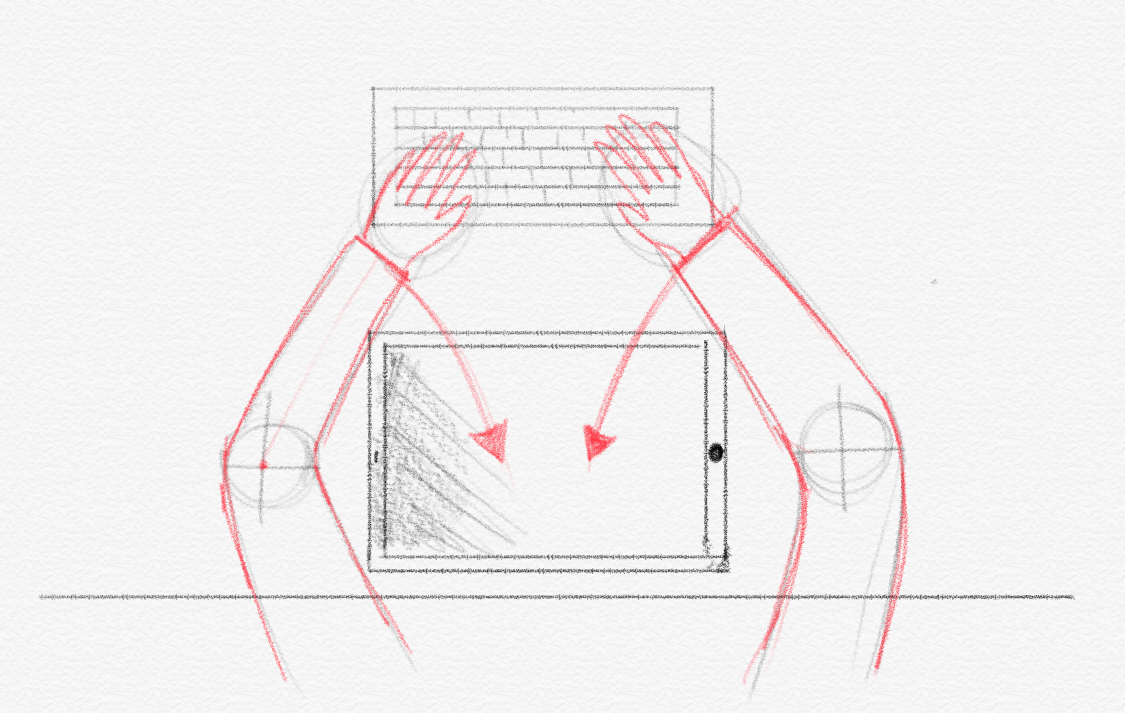 Have you considered the added strain this puts on your neck and shoulder muscles, as you instinctively dip your chin down to look at the screen?
M

As the above poster said, plus you have your shoulders abducted which would tire them out after hours. It's a really inefficient use of the body. Resting on the elbows might not be that good for an extended period either, I have gotten pain from that before.
E

Thanks for your feedback! I haven't really tested this out for a long time, so it might very well be that the neck takes a beating... although I have to say I already get pretty annoying neck strain from staring down at a laptop, so maybe this would not be very different.
I don't understand what you mean by shoulders abducted... this would be the same position I stay for many hours a day already on my current desktop setup and my shoulders are fine... maybe the drawing was a bit misleading : )
[doublepost=1499091298][/doublepost]Also, I have to say you're right: resting on the bone of the elbow is pretty painful, what I rest on is actually the soft bit just next to it on the forearm, on the edge of the desk.
You must log in or register to reply here.

iPad Oct 7, 2020
darngooddesign
D
S
All iPads Why will you go iPad instead of Apple Silicon laptop?