The latest numbers from market research firm IDC's Worldwide Quarterly Tablet Tracker show that Apple remains the largest vendor in a declining tablet market, shipping 10.9 million iPads in the second quarter of 2015. While the iPad continues to be the best-selling tablet, its worldwide market share fell below 25% as Apple faced increased competition from low-cost rivals Lenovo, Huawei and LG. 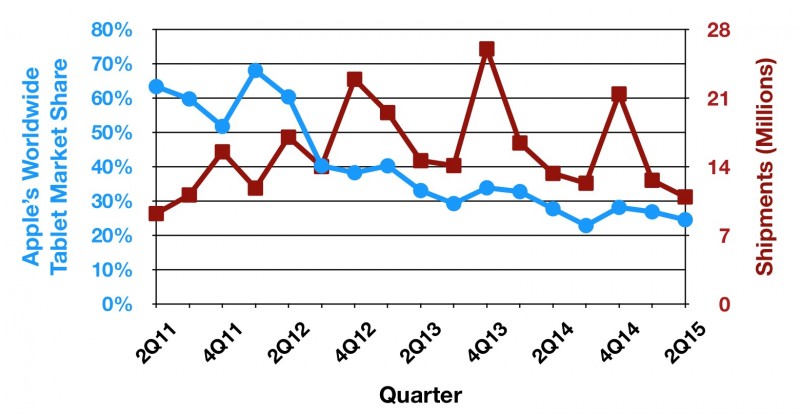 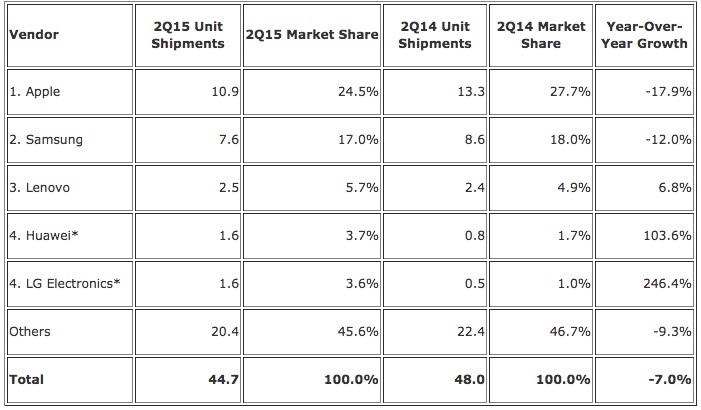 iPad sales have declined for six consecutive quarters year-over-year in what has become a stagnated tablet market over the past few years, but that trend could be broken in a few months as Apple is expected to release up to three new iPads in time for the holiday shopping season: iPad Air 3, iPad mini 4 and the much-rumored 12.9-inch "iPad Pro" targeted at professional and enterprise users.

i thought tablets were the future and would replace laptops?

IMO, that's just what happens when the tablet market exploded too soon and OEMs flood the market with tons of cheap tablets.

I don't see this as a inherently bad thing. I still love my iPad, and get lots of use out of it, and do see myself upgrading eventually.
Reactions: MareLuce, linuslh1996, Amazing Iceman and 16 others
C

I think we're coming to see that tablets are a lot like PCs in regards to how often they will be upgraded by users. They had the large initial boom of sales to get them into the market, now people are just keeping what they have since it's good enough. The iPad 2 still gets the job done for most people and most businesses who purchase them in bulk are also still using iPad 2s. No reason to get a newer model.

In fact I think tablets will be upgraded even less often than PCs going forward as they are the least essential device between computers, smartphones, and tablets.
Reactions: ssgbryan, jacobj, Jamalien and 20 others

I stopped using my iPad when I got my iPhone 6 Plus. My guess is that's the direction personal computing will head. Your phone will be the hub. It'll act as a mobile device when on the go, but when you get home, it'll wirelessly connect to some sort of Cinema Display.
Reactions: kupkakez, linuslh1996, Amazing Iceman and 17 others

If this trend continues I wonder if they'll pull some resources out of iOS. If they can't sell hardware, why continue to push the boundaries of the software?
Reactions: imanidiot, AleXXXa and Benjamin Frost

I don't think releasing an iPad-speed bump will increase marketshare a lot.
The iPad Air 2 is IMHO the best update to date, but that didn't really help improve marketshare.

It's time for a "different" iPad... something more than just a blown-up iPod Touch.
Reactions: Beavix, linuslh1996, iknows and 18 others

People say stuff like this all the time. I remember when someone told me we wouldn't be able to buy desktops anymore because laptops would replace them completely. Then it was the same with tablets. And while some people have replaced their desktops with laptops or their laptops with tablets, it is never on the scale that the analysts say it will be. They are different tools.
Reactions: Billy95Tech, Nermal, linuslh1996 and 6 others

I suggest that Apple does not release a new iPad Air this year. That should help...
Reactions: nj-morris, AleXXXa and Ulisescm
M

I'm telling Ya, if Apple wants to revitalize this market....all they have to do is rebrand the iPod touch as an iPad nano, offer it in 4.7 and 5.5" sizes and add cellular data just like an iPad. Boom. There it is. Sales would sore. Problem solved. Thank you Apple.
Reactions: Billy95Tech, keatth, chrisbru and 6 others

MacsRgr8 said:
I don't think releasing an iPad-speed bump will increase marketshare a lot.
The iPad Air 2 is IMHO the best update to date, but that didn't really help improve marketshare.

It's time for a "different" iPad... something more than just a blown-up iPod Touch.
Click to expand...

No new iPad will help with the upgraders. Not.
Reactions: AleXXXa and Gasu E.

For basic home use, tablets are fine - email, light word processing, web browsing, casual game playing.. for more serious work, they just aren't there yet. In many cases - not all - especially iPad - the apps are cut down versions of their desktop counterparts.
Reactions: ceva321, linuslh1996, Mactendo and 3 others
D

Well, I rarely use my personal laptop anymore (not counting using my work one @ work). And if I need to do something more engaging than what I can do on my iPhone, I use my iPad.

Previously it would be like 5 years before I'd buy a new laptop if that. My first iPad was the air 2 and I don't really see a reason to upgrade for a few years if that. Apple is a victim of their own quality. Plus the tablet is more like a laptop - people don't upgrade it every year.

They still sold 10.9 million iPads in the space of 3 months. Thats not to be sniffed at.
Reactions: Billy95Tech, linuslh1996, chrisbru and 19 others

I just think that people won't update their tablets as often as phones. I use my 3rd gen iPad everyday and it works perfectly fine for what I use it for. Though with the multitasking features of iOS 9, I think this will be the year I finally upgrade.
Reactions: Billy95Tech, Jamalien, APlotdevice and 6 others
R

Not surprised. The novelty has fully worn off. I barely use my iPad Air 2, it's a wonder why I even have it. I get more done with my iPhone 6 Plus and Laptop.
Reactions: Poochi, kas23, AleXXXa and 2 others
B

I have an iPad 2 64gb. I hope Apple realizes the reason why I, and some others, haven't bought another one is my iPad still works great. I don't think people need the new items on an iPad as much as on a phone. I bought a iPhone 4s then iPhone 5 and I am still using the 5. They make good hardware and most people aren't going to buy the new item unless it is needed.
Reactions: Xtremjeepn, Lazy, Benjamin Frost and 2 others
J

I still have a first generation Retina Mini 128GB LTE model. I have no desire to upgrade it and don't plan on doing so even when new iPads come out.

I actually stopped using it when I bought my 2015 15" retina MBP.
Reactions: Ulisescm

Sales declining is one thing, but a market share decline is somewhat concerning.
Reactions: RogerWilco, Mactendo and JackANSI
M

Unlike iPhones, people tend to hold onto their ipads for a long time. I think this is why Apple from the beginning has crippled the ipads with pathetic ram, to make sure people are forced to update more often. If apps don't run, then the only answer is to upgrade.
Reactions: Billy95Tech, linuslh1996, Jamalien and 8 others

They are or will be if you see the total volumes and compare them to the ones of e.g. laptops. At least when you take the private sector into account. Business is something different and here no such prediction was made.

Secondly, people just don't replace them as fast as other iOS products especially like the iPhone, whose growth rates are mainly used for comparison.
Reactions: Gasu E.

If iPads get first party pen support, I will instantly buy an iPad again. I am hopeful for the future of iPad since Apple announced some awesome iOS 9 multitasking features for the iPad. I guess a little dip in sales gave Apple some much needed motivation.

On a side note, the iPad needs to get every new iPhone feature so it feels new and desirable. Why does features like touch ID come a year too late. For example, the current iPad should have the same curved glass as the iPhone 6, it should have the same dual tone flash, etc...
Reactions: Billy95Tech, Poochi, Jamalien and 8 others

Just about to sell/give away my iPad. Don't have a need for another one.
Reactions: Poochi
L