Apple has registered new tablets with the Eurasian Economic Commission this week, suggesting that an iPad refresh is likely on the horizon. The filings, uncovered by French website Consomac, are legally required for any devices with encryption sold in Armenia, Belarus, Kazakhstan, Kyrgyzstan, and Russia. 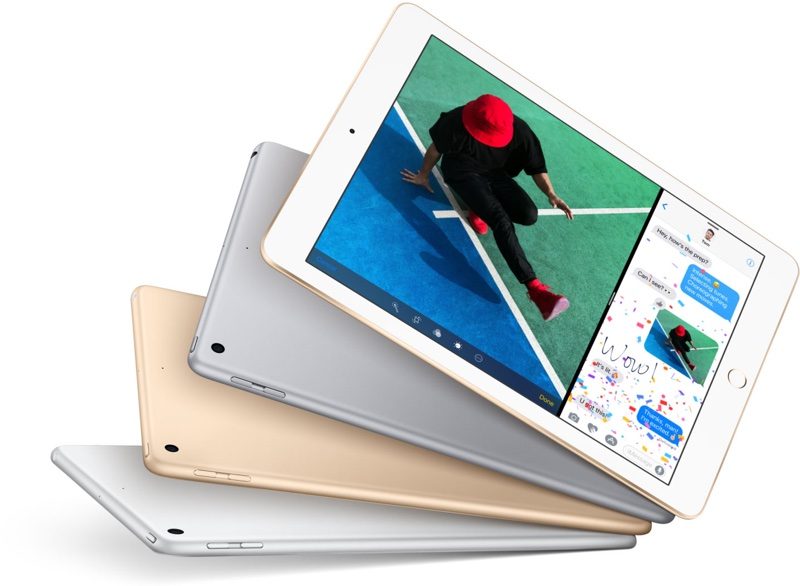 Two of the tablets have model numbers A1893 and A1954, which don't correspond with any current iPad mini, iPad, or iPad Pro. There are also a handful of "sample" tablet and smartphone products listed that have model numbers starting with AA and CC, which is uncharacteristic, so it's unclear what those listings may pertain to.

Recent rumors and logical guesswork suggest Apple could be planning an annual refresh of its lower-cost 9.7-inch iPad, introduced last March for $329 in the United States, while the iPad mini has also gone a few years without an update. 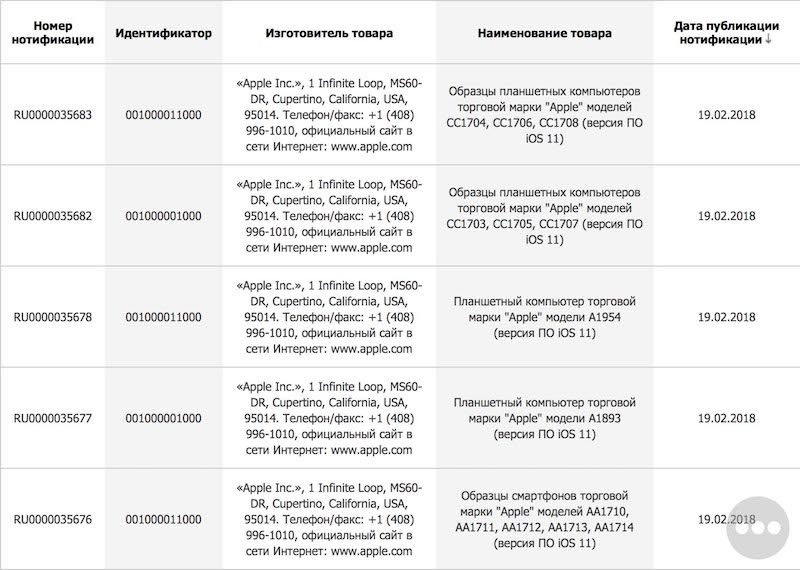 Eurasian Economic Commission listings via Consomac​
A few months ago, supply chain informant DigiTimes claimed Apple is planning to release an even cheaper 9.7-inch iPad for around $259 this year. The website also said Apple's first new products of 2018 would be released in March, so next month is shaping up to see the arrival of at least one new budget iPad.

It's unclear what changes the new 9.7-inch iPad would have, but given its price point, it will likely retain a classic design with top and bottom bezels and a home button with Touch ID, rather than Face ID. Any refresh is likely to be a relatively minor one, with a focus on performance improvements.

Given the 9.7-inch iPad is a niche product, a refresh could be announced via press release like last year. But with rumors swirling about a new iPhone SE, originally unveiled at a March 2016 event, perhaps Apple will have enough announcements on its docket to host a special event at Steve Jobs Theater.

Apple's rumored iPad Pro with Face ID is more likely to be unveiled at WWDC 2018 in June, but the discontinued 9.7-inch iPad Pro debuted in March 2016, so there's some precedence for an earlier introduction.

In the past, similar filings with the Eurasian Economic Commission have been submitted for the 10.5-inch iPad Pro and 12.9-inch iPad Pro, iPhone 7 and iPhone 7 Plus, Apple Watch Series 2, AirPods, and MacBook Pro with Touch Bar models, all within one to two weeks before each product was released.

All in all, the listings suggest Apple will introduce new products of some kind in March for the fourth consecutive year.

I hope they update the mini also, but it’s looking unlikely.
Reactions: Severud, reggers, HarryWild and 24 others
0

Makes me wonder when air power will be out...
Reactions: LandRovers, unobtainium, MrUNIMOG and 2 others

oh right, forgot about that. This too.
Reactions: Glideslope, haruhiko, Aldaris and 1 other person
Z

Hope so.
iPad mini is like the iPhone SE, smaller foot print at lower price point.
An updated version with the A9 or A10 would be great.
Reactions: Severud, reggers, gvmelbrty and 7 others

If they put face ID in the iPad Pro, I wonder will they make the screen bigger or the device smaller?
Reactions: ShaunAFC3, GeeMillz22, MrUNIMOG and 1 other person

Scottsoapbox said:
If they put face ID in the iPad Pro, I wonder will they make the screen bigger or the device smaller?
Click to expand...

As long as it’s bigger on the inside ...
Reactions: ShaunAFC3 and JetLaw

With this I expect a new iPad by end of March very likely coinciding with the launch of iOS 11.3 in late March. We probably will see the launch of the AirPower Mat as well. All these things in a neat little announcement in Apple newsroom and a website refresh.
Reactions: ShaunAFC3 and MrUNIMOG
A

Yeah that's not gonna happen, at least not first on an iPad. If they ever make the change then it will be first on the iPhone.
Reactions: Glideslope, gobikerider, ShaunAFC3 and 3 others

I can't recall a time when Belarus, Armenia and Kazakhstan were on the launch-day release highlight of an Apple Keynote. Could'nt they have delayed release in those countries to maintain suspense even longer?
Reactions: reggers, Rojaaemon and MrUNIMOG
A

mtneer said:
I can't recall a time when Belarus, Armenia and Kazakhstan were on the launch-day release highlight of an Apple Keynote. Could'nt they have delayed release in those countries to maintain suspense even longer?
Click to expand...

Lately their devices have been launching in russia as little as just one or two weeks after US. Besides this kind of leak is barely a leak since all it confirms is they are working on a new hardware devise (who could have guessed?)
Reactions: MrUNIMOG

Tad bit early to refresh the Pro line which came out last June. Except for the iPad 4, Apple has had at least 11-12 months gap between refreshes. IF new iPads are on the way, the entry iPad was released last March, so that model is on target. And it's been nearly 2.5 years since the mini was refreshed. It can't even do "hey Siri," unplugged. (Then again, thanks to some fancy gimping neither can the low end iPad even though it has an A9.) So maybe, just maybe new models of each are on the way. Would be fantastic to get a nearly bezel-free mini w/ "hey Siri" unplugged and Pencil capability.
Reactions: ShaunAFC3 and 007p

gobikerider said:
With this I expect a new iPad by end of March very likely coinciding with the launch of iOS 11.3 in late March. We probably will see the launch of the AirPower Mat as well. All these things in a neat little announcement in Apple newsroom and a website refresh.
Click to expand...

What SOC are we expecting on these? The A9? A10? Something else?
Reactions: ShaunAFC3
T

Timely, was looking at that 329 iPad after having not really been interested in them since they came out.

If it could gain back the anti reflective coating at least at the same price, that would be awesome, and I'd expect A10.


jecowa said:
What SOC are we expecting on these? The A9? A10? Something else? I don't imagine they would give them the same A11 chip found on the iPad Pro.
Click to expand...

The current iPad Pros use the A10X, not A11, and I'd expect the A10 here to stay on the one back non-X seeming cycle of the 329 iPad.
Reactions: ShaunAFC3

If they update the mini with an A10 -I wish an A11 but I know it's not likely to happen-, and lower the price tag (similar approach as the SE and the 2017 iPad, with matte corners), I'll buy one, definitely. The regular iPad is too big for me as a tablet.

As for the 2018 iPad, I just ask for an A11 bionic chip. Everything else can keep the same specs, it's fine for me
Reactions: luxvision and ShaunAFC3

jecowa said:
What SOC are we expecting on these? The A9? A10? Something else?
Click to expand...

It doesn't make any sense to update the entry level iPad with the A10 next month when the Pro is using A10X.

iPad X. Starts at $999 with a notch that is really annoying no matter how you hold it. Glass back makes it twice as fragile.

In all seriousness though, this is probably a cheap iPad and the new Pro will come out in the summer or autumn. If they do the Face ID thing, I hope they at least have a slim, uniform bezel across the entire top and bottom. You could still save a lot of space on the iPad with such a design without making it really freaking annoying when holding it in landscape or using it with a keyboard case (which is much more frequent than using the iPhone X in landscape). However, I wish they would update the Pro in November every year so that it could get a faster chip than the rest of the A-series. It's pretty lame when your "Pro" tablet gets beat in benchmarks by your mid-range phone (iPhone 8) within a couple months of launch. Just imagine the uproar if the new MacBook Air released a couple months after new 15" MacBook Pros every year beat them in benchmarks by 5-10%.
Reactions: Kiorr and ShaunAFC3
0

jonnyb098 said:
It doesn't make any sense to update the entry level iPad with the A10 next month when the Pro is using A10X.
Click to expand...

Why not? They put the A9 in it, when pros had the A9X? Or do you not think it will have a processor bump at all?
Reactions: ShaunAFC3 and Glmnet1

Just bring the smart keyboard support to the normal iPad, Apple! It can replace tons of computers with just that feature
Reactions: ShaunAFC3
T

jonnyb098 said:
It doesn't make any sense to update the entry level iPad with the A10 next month when the Pro is using A10X.
Click to expand...

Why? The A10X is nearly as powerful as A11 on the CPU, and still significantly better on GPU. And it has 4GB of RAM instead of 2. It would still be decidedly ahead of an A10 then. These yearly ups and downs always exist, like when the iPhone is updated months after the iPad and spends half the year on a newer processor.
Reactions: rui no onna and ShaunAFC3
You must log in or register to reply here.
Share:
Facebook Twitter Reddit Email Link
Register on MacRumors! This sidebar will go away, and you'll see fewer ads.
Sign Up
Top Bottom