In a face down sidewalk drop test at six feet, the iPhone 12 suffered small cracks and scuffed corners and edges, leaving sharp grooves in the metal. According to Allstate, this result was significantly better than both its predecessor, the iPhone 11, and the Samsung Galaxy S20.

In a back down drop test in similar conditions, the iPhone 12 corners and edges were scuffed but the rear panel survived "virtually unscathed," and the testers suggested its improved durability could be down to its flat-edge design. Meanwhile, the iPhone 12 Pro shattered when dropped on its back, resulting in loose glass and cracking on its wide camera. The damage was not catastrophic, however, and the iPhone 12 Pro seemed to work as normal after impact.

When dropped on their sides in similar conditions, both iPhone 12 and iPhone 12 Pro suffered scuffing and sharp steel edges, especially along their corners, but both models were otherwise
unharmed. The testers summed up the findings with the following:

Through face-down, back-down, and side-down breakability drop tests, Allstate Protection Plans found that the Ceramic Shield front front is a huge improvement. Additionally, the flat side design appears to improve durability on both phones when dropped on their rear panels. That said, both phones were damaged when dropped on a sidewalk. Given their hefty repair costs, we encourage everyone to use a protective case and treat their new iPhone 12 with the care you would give an expensive camera.
Click to expand...

YouTube channel MobileReviewsEh previously conducted some tests on the ‌iPhone 12‌ using a force meter to compare its performance to the ‌iPhone 11‌. You can see the results of those.

Keep in mind that these kinds of drop tests are not always going to see the same results, and can vary based on the angle that an ‌iPhone‌ happens to fall at, so it's always best to use caution with devices made of glass, whether or not they have a Ceramic Shield.

My love for you is damage proof. 🥰
Reactions: sideshowuniqueuser, TropN, Shawn Llewellyn and 17 others

What a horrible choice for a soundtrack, JFC.
PSA - Mute it before playing. 🙉
Reactions: kazmac, dtich, DotCom2 and 2 others

In other news, water is still wet, and the sun is hot.
Reactions: Soham Patwardhan, tridley68, Oscar_440 and 10 others

apple didn't claim it was damage proof. they just said that it's the strongest glass ever created on the best iphone ever made. get with it.
Reactions: SashJ, tridley68, cornelius1 and 11 others

Too bad phones can't be carved from a solid diamond. I guess we'd somehow still need a case then too though lol.
Reactions: dtich and TheDailyApple

MacRumors said:
When dropped on their sides in similar conditions, both iPhone 12 and iPhone 12 Pro suffered scuffing and sharp steel edges, especially along their corners, but both models were otherwise
unharmed.
Click to expand...

The iPhone 12 suffered “sharp steel edges,” even though its frame is made of aluminum?
Reactions: cornelius1, Kengineer, PickUrPoison and 6 others

Worst thing about Apples design is the front screen is easy to repair at 279(?) bucks - but back cover cannot be repaired, you'll need am exchange device - or like Apple calls it "other repairs". Costs you about 600 bucks.

So basically it would make much more sense to place the ceramic shield on the back - or simply to use a completely different material for he back cover.
Reactions: carltabet, mihike, Champagne_5S and 2 others

What phone on the market that doesnt BREKE put a case on it popele🎃👌
Reactions: rumormiller

Pretty impressive results really. I don’t know how you calculate “4x better drop protection” but I’ll take the better protection I’ve been seeing from these videos. It’s not like I’m going to start yeeting my iPhone 12 across rooms lol.
Reactions: mihike, decypher44, LeadingHeat and 1 other person

Damn, I bought it thinking I could drive with my car on it.
I'll ask for a refund then.
Reactions: w7ay, Howard Yune and 1bcoolrob
J

Interesting that they found the 12 to be more resistant to damage to the glass than the 12 Pro.

Presumably the aluminium sides are a slightly softer metal than the stainless steel ones and perhaps they absorb some of the impact.

Probably preferable to have a dented metal band than a cracked glass front or back!

The back is not repairable in store with the machine so they have to replace the entire device when you crack the back. So you just get a new/refurbished entire phone.
Reactions: decypher44 and pianophile
S

“No dmg proof”??
This is a phone not a construction thing
Nothing is dmg proof !

This is the longest article with literally no information, I've unfortunately read in quite some time.
S

People still miss-take the water proof with water resistant even in 2020 and now we begin with dmg proof?
This is the next thing?!

Glad there some increased damage resistance. PSA: The iPhone 12 though is not a hockey puck.
S

From here macrumors translated ...why people take and translate without thinking, ?! 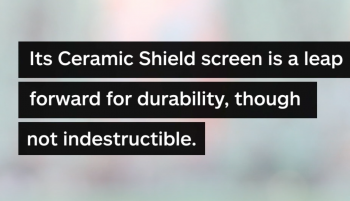