Despite being months away from launch, we've already seen several rumors regarding the 2021 iPhone. Now, as we inch closer to release nonetheless, new rumors point towards some design changes, new colors, and new features to expect. 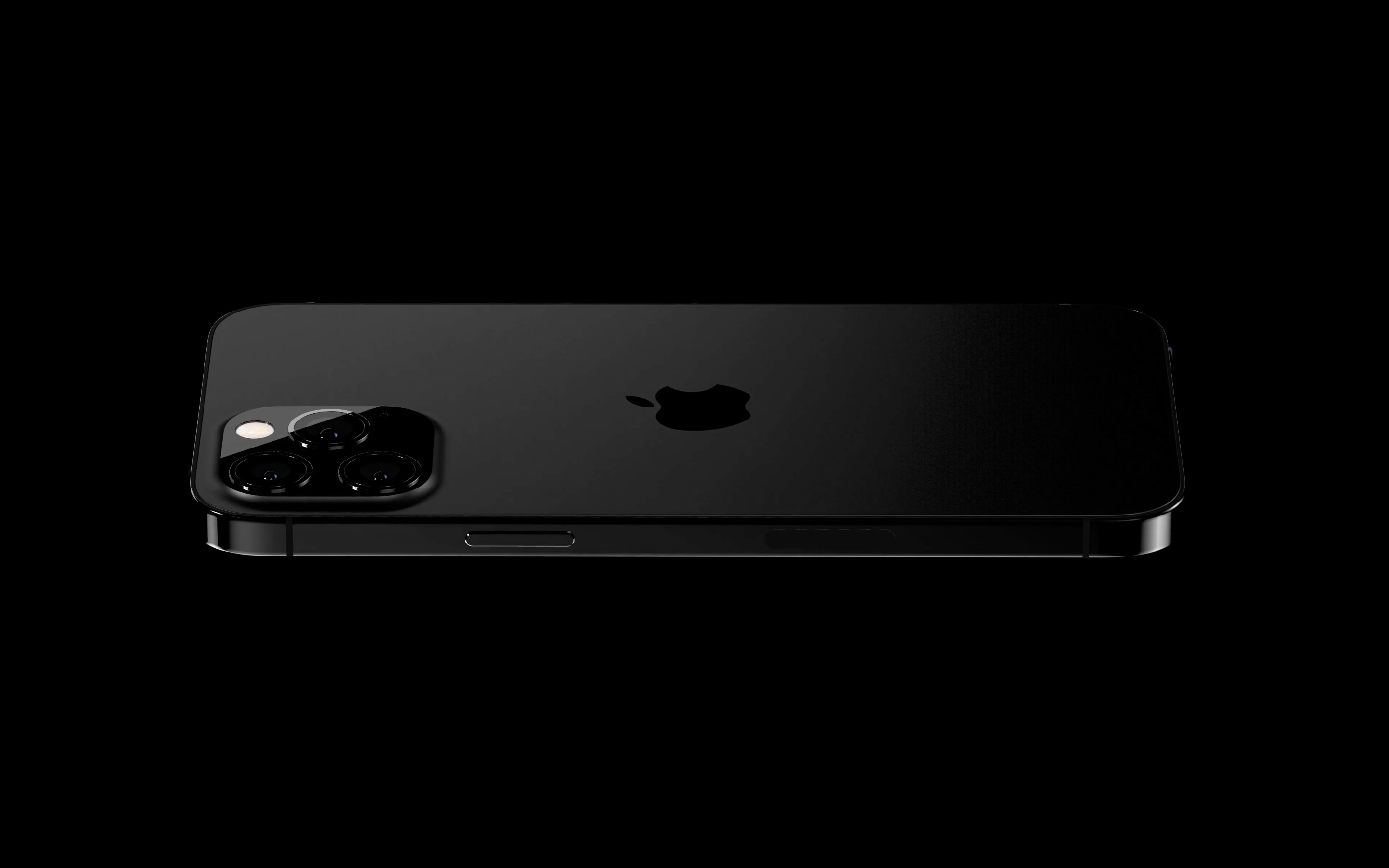 According to leaker Max Weinbach (via YouTube channel EverythingApplePro), the iPhone 13 will come with a matte black option for the Pro and Pro Max models, a new stainless steel coating that reduces smudges and fingerprints, a new rear-camera design, and improved noise cancelation with beamforming for phone calls.

Weinbach says the color is a "redesigned graphite" but is "borderline black." According to Weinbach, Apple is also experimenting with an orange, almost bronze-like color for the new iPhones, but he says it's unlikely to launch.

The iPhone 12 lineup brought back the beloved flat-edged design, as well as stainless steel edges for the 12 Pro and 12 Pro Max. Since the models were launched, users have complained about the ability of the edges to attract smudges and fingerprints, especially for lighter-colored options like Gold. Apple's looking to address the issue with the iPhone 13 by adopting a new anti-smudge and fingerprint coating, according to Weinbach.

Alongside a suite of previously rumored features, the iPhone 13 Pro and 13 Pro Max camera system will include a new process for taking portrait photos. Weinbach reports that portrait mode on the new Pro iPhones will rely significantly on LiDAR. LiDAR, currently on the iPhone 12 Pro, Pro Max, and iPad Pro, is used for improved low-light image photography. However, Weinbach says Apple will take it a step further with portrait mode this year.

Portrait mode on the new iPhones will be overhauled greatly. It will now rely heavily on a new process that combines both data from the lenses as well as LiDAR. LiDAR is specifically going to be used for much better edge detection. Things like smaller gaps in street signs are now supposed to be detected by the new process. This goes with portrait video as portrait mode overhaul that Apple is working on for the 2021 iPhones.
Click to expand...

Weinbach says that within iOS itself, Apple will also include a new iOS "image stabilization correction" mode that will automatically detect and keep a subject in focus during a video. Given this is software-based, it's unknown if special hardware within the 2021 iPhones enables this mode or whether it could silently debut in older iPhone models.

As for the lineup itself, Weinbach says Apple plans to keep the 5.4-inch iPhone 13 mini form factor in its lineup, despite widespread reporting of the iPhone 12 mini's lackluster sales performance. With the iPhone 13 mini, Apple is looking to improve battery life, a significant point of concern for customers who enjoy the smaller form factor. Weinbach says the battery itself will be larger and that longer battery life will further be improved thanks to the efficiency of the A15 chip.

Weinbach previously stated that the new iPhones would include stronger MagSafe, astrophotography capabilities, and the ability to take portrait mode videos.

Earlier this week, images sent to MacRumors show alleged photos of the front glass panels for the iPhone 13 models, which show the earpieces relocated to the top bezel. If true, it would be the most significant change to the notch's design since its debut in the iPhone X. Apple analyst Ming-Chi Kuo says Apple plans to switch to a hole-punch design for some iPhone models starting in 2022.

Weinbach is like 67% accurate (for Apple news) and most of the stuff he either repeats for next year (if they don't come true this year) or are some very safe bets. "The new iPhone will have a new color but it's unlikely that they will make it" -
ok so???
Reactions: cbaca51, crawfish963, Jovijoker and 7 others

I feel so sorry for anyone who bought that iPhone 12 piece of junk
Reactions: aWaldo, Mattlike, cbaca51 and 26 others

Oh boy, I am so glad that my 12 Pro order never arrived.
Reactions: clunkmess, Dopestar, iGüey and 8 others

Call it the "MKBHD Edition".

Seriously though, if true that is a really nice color. Hope they offer it in the Mini as well.
Reactions: sarvdan, cbaca51, Don1985 and 14 others

All these rumors so far point towards a pretty solid release!
Reactions: GrumpyMom, The Barron, Falhófnir and 7 others
M

Aluminum213 said:
I feel so sorry for anyone who bought that iPhone 12 piece of junk
Click to expand...

Right, but the iPhone 13 Pro isn’t significantly better in terms of changes. I’m sure people will say the same thing with the 13 Pro once the 14 Pro is rumoured. It’s a phone, improvements happen every year. Those with the 12 Pro are unlikely to upgrade after one generation.
Reactions: aWaldo, clunkmess, Mr. Rod and 17 others

If this has Touch ID and comes in matte black, I may finally replace my iPhone 8 Plus...
Reactions: bushman4, vgmrm, MarvinHC and 30 others
P

I need that orange.
Reactions: Moonjumper, peanuts_of_pathos, Dopestar and 3 others

SirAnthonyHopkins said:
If this has Touch ID and comes in matte black, I may finally replace my iPhone 8 Plus...
Click to expand...

Thinking the exact same thing - my 8 plus while could use a battery replacement is still solid.
Last edited: Mar 26, 2021
Reactions: SirAnthonyHopkins, Mike_Trivisonno, GeoSciGuy and 1 other person

Finally a well made black Pro device! They seem to be getting lighter with each generation. Also hoping for a pitch black stainless steel watch, not happy that they replaced black with graphite.
Reactions: iGüey, richinaus, GrumpyMom and 1 other person
W

Will it not be called iPhone 12s ?
Reactions: iGüey and Mike_Trivisonno

Most people put cases on them so who care about the color
Reactions: Jovijoker, PC_tech, Dopestar and 14 others

Yes , as has been said it’ll be 12s as 13 is unlucky
Reactions: iGüey and Mike_Trivisonno

Remember kids; Weinbach is historically 11% less accurate than Prosser, so if you’re going to complain about Prosser’s leaks being reported then you have to keep that same energy here.
Reactions: ccraig13, Tech for Kings, Mr. Rod and 18 others

Max Weinbach is the source. ?‍♂️ Means most of the things mentioned aren’t happening ?
Reactions: Tech for Kings, Keniutek, George Dawes and 8 others

Wyckham said:
Will it not be called iPhone 12s ?
Click to expand...

What's the point? After the X they've all been "S" models essentially. And I don't believe in superstition when it comes to 13.
Reactions: Keniutek, Jmausmuc, Jovijoker and 3 others

otternonsense said:
What's the point? After the X they've all been "S" models essentially. And I don't believe in superstition when it comes to 13.
Click to expand...

Bored with my I phone 12 pro max hurry up Apple I'm ready to upgrade.
Reactions: MacRealist91, sdz, Premium1 and 9 others

"Astrophotography capabilities"? I wonder what that means. You need either a LOT of light gathering or a sidereal mount to get good night sky photos. And decent zoom capability helps.
Reactions: peanuts_of_pathos, SMacDuff, iGüey and 2 others

120hz displays suck down battery life fast, so the “always on” display is questionable. Even if the refresh rate is dynamic, they still soak up a ton of juice to run.

I think touchID is a given.

Copper colored would be slick. Bronze, no thanks.

Fingerprint resistant coatings seems reasonable as well. The steel on the pros, and the back smooth glass on the regular 12’s get disgusting fast.

Superstition is dumb. Name it 13.
Reactions: GuruZac, otternonsense, peanuts_of_pathos and 6 others

If it looks like the S21 ultra matte black that will be hard not to buy even though I’m very much into the blue devices right now.
Reactions: PhillyGuy72, GrumpyMom, noblesoul117 and 1 other person
You must log in or register to reply here.
Share:
Facebook Twitter Reddit Email Share Link
Register on MacRumors! This sidebar will go away, and you'll see fewer ads.
Sign Up
Top Bottom