Wired published the results of their international speed tests for the iPhone 3G. Results came in from over 2,600 individuals and did find significant regional differences in testing.

When broken down by country, they found that participants in Australia had the slowest average 3G download speeds at 759 Kbps.

Meanwhile. results from individual carriers showed that European T-Mobile had the fastest speeds at 1,822 Kbps, followed by Canada (both Rogers and Fido) at 1,330 Kbps. U.S. AT&T customers found themselves in 3rd place, tied with Telstra, Telia and Softbank at an average speed of 990 Kbps.

So we are barely ahead of Australia and we only about half as fast as Europe. Wow I'm even jealous of Canada, they complained about the pricing, but they get much faster downloads than we do.

Far from a scientific survey, but I was still interested to see how regions would vary.

So if you see no data for your city, keep zooming, there may be some.

The speed bars vary wildly, just a few miles apart, in the area where I live.... but I'm right between two nice green ones

(None of which, again, is very scientific. One lone report vs. another could be more about being in a building or not than the actual map location.)
R

Damn, I wish I wasn't in Australia..
M

In theorie we have acces to the 3g+ network but for some reason Orange has capped the speed to 384 kbps which is way lower then the theoretical 3,6 Mbits/sec or 7,2 Mbits/sec in central cities

for those that understand french, this topic is talking and centralising all our complains, proof, test results, petition etc etc

We are trying to make thing move since it is revolting, Orange France offers 3G+ network (loads of publicity) and once you get it and pay ... you just get 3G

We're trying to spread the word out to others to compare and eventually help us in our battle against the monopoly of Orange in France.

Thanks for your support
S

these stats are misleading.

canada is a far more urbanized nation than the United States, demographically speaking, with a much lower percentage of rural population. add in the higher prices, and you're probably restricting the vast majority of usage to a handful of neighborhoods in toronto, vancouver and montreal.

establishing coverage in these canadian cities is comparatively easy, compared to the US as a whole.

you really need to compare city by city for these statistics to mean anything. comparing stats across entire countries is misleading because there are areas of lower population in the US that will drag down the nationwide averages even though they are probably better served than areas of similar density in canada.
S

i might be overstating slightly by saying that iPhone usage is restricted to just three cities in canada .. but i've counted the canadian dots on the wired map, and about a third of them are in the greater toronto area alone.

so don't get *too* jealous.

Slowest average speed yet we probably pay the highest cost per mb in the western world. Great!
P

Bunch of whiners don't know when to shut up and be happy they at least have 3G now.

mj_1903 said:
Slowest average speed yet we probably pay the highest cost per mb in the western world. Great!
Click to expand...

but if you can afford it, Telstra offers the 3rd fastest speeds in the world

It's more than just country & provider. It all comes down to where, exactly, you live, which tower you are using, and how many other people are using it as well.

I lived in Fort Lauderdale, FL up until this past Saturday and I always got about 1.5Mbps.... Now that I live in New York City, I can barely get 0.5...

Living in Antarctica sucks! What a waste of money!

(and i'm in mississauga, close to toronto)
L

Looking at the Sydney results a bit closer is quite surprising. Most of the results are from Optus and are in the 300-400 range, while the Telstra results are roughly 10x that at 3000-4000. Quite a big difference. If only Telstra didn't charge so much for their data plans! 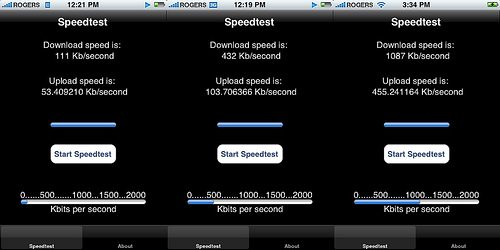 This shows EDGE, 3G and Wi-fi, respectively. Both cell network readings were taken by High Park in Toronto, Canada. Wi-fi was taken at home (not that the wi-fi location matters).

Hardly scientific, but I took a few readings for each and they were all about the same. Although depending on where I am I usually get at least 1 Mbit on 3G. Those readings seemed a little low.
R

Dallas must be in Australia

I live in the Dallas areas and even with 5 solid 3G bars I get only about 500kbps. With fewer bars I get around 300kbps. Are people in other parts of the US really getting twice that much?? What's the deal everything is supposed to be bigger in Texas

Anyone in Dallas getting anything better?

This reinforces the previously claimed condition, that for most users, EDGE is just fine and having any access is better than no access or claimed fast access that is not real. The primary benefit to 3G is not speed, since very few iPhone applications truly benefit substantially from speed increases, real or imagined or promised. The real benefit to 3G is in areas where ONLY 3G is accessable and is your only path to data access.

Perhaps some day, but not today. In the mean time disable Bluetooth and 3G and greatly extend battery life.

Here in Victoria on Fido, I get between 1.3 and 2.2 Megabits per second during non-peak hours on 3G.

aristotle said:
Here in Victoria on Fido, I get between 1.3 and 2.2 Megabits per second during non-peak hours on 3G.
Click to expand...

I'm still sitting on the fence about whether I want to get an iPhone. The $30/month promo ends in a week... but who's to say there won't be something just as good or better coming later...

notjustjay said:
And during peak hours... ?

I'm still sitting on the fence about whether I want to get an iPhone. The $30/month promo ends in a week... but who's to say there won't be something just as good or better coming later...
Click to expand...

By peak hours, I'm talking about rush hour (5-6:30pm). My speed will fluctuate between 0.3-1.0 Mbps. During the day, I'm able to watch Youtube during my lunch hour on 3G no problem while walking around the downtown core.

I'll have to try out my reception in Vancouver later on in the week when I'm over there on business.

I'd suggest going with Fido if you are in an area serviced by them. I broke my contract with Rogers just to get an iPhone and I could not be happier with the early evenings/weekends and other perks. I should be able to at least partially pay for the next iPhone model with my Fido dollars.

One reason I have not upgraded my iPhone to 3G yet is because AT&T's coverage map indicates no 3G service yet. The AT&T store in our area says there will be service in late August (here we are).

I was helping my dad with his cell phone just yesterday and noticed that his Razr indicated 3G with 5 bars reception in our area. I may have to make a trip into our local AT&T store today to test out a iPhone 3G demo model and inquire about the 3G service. Keeping my fingers crossed that upgrading will be a good move. Also considering waiting for any impending hardware updates.

I wish this test was more scientific as it would certainly lend more credibility to what I'm reading on the Internet. I will also keep an eye out for a Macrumors iPhone 3G user experience survey.
E

This is invaluable information to help you decide what country to use your new iPhone 3G in.