Does anyone else's iPhone 3Gs have a yellow screen tint?

You can see it clearly in the following photo. The iPhone 3G is on the left, my old iPhone 2G is on the right. The 3G's one is distinctly yellow and dimmer than the 2G one when set to identical brightness. 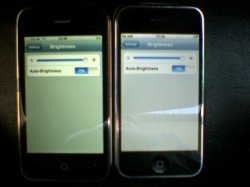 I'm on the phone to Apple Support now to try to look into this fault.

Since starting this thread, I've returned my iPhone and have been lucky enough to get another one and its a lot better. Now, from what I can gather from this thread and people's experiences is that all 3G iPhones have a slight yellow tint compared to the original iPhone. Its not as bad on the whole as my picture indicates.

I'm a lot happier with my replacement phone although I would still prefer the colours a little cooler.

If you have an issue with the yellow tint but its not as bad as I described mine to be then I suggest filing some feedback with Apple about the iPhone using the following form:

If enough of us ask for it, we MAY be able to get screen colour temperature options and maybe even more advanced colour/contrast/gammut settings etc - something professional photographers would probably like anyway so as to showcase their work on the fly better.

Some people prefer the blue tint, some people prefer the yellow tint. If we ask Apple enough, maybe they will give us some more choice on this. I fully believe this can be far better controlled with a software update. Honestly, there's a good chance that Apple purposefully made the screen appear this way so that the icons on the dashboard and films appear to have far more colour depth and contrast and so would pop out as better to some people.

Edit 3: Some people have reported better colour tones after connecting their iPhones to iTunes and doing a full restore to factory settings. It appears that a slightly newer firmware version is downloaded and this seems to have corrected the colour somewhat. I add that I did this with my replacement 3G iPhone by accident too because it got messed up during Apple's server activation crash so my second 3G iPhone photos are using this new build. Make sure you backup your iPhone before trying this.

uh oh...this can't be good. The start of another major QC issue? Say it ain't so!

Hope you are able to get it replaced.
C

There was a LCD panel lottery with the first generation screens. I got lucky and had a screen which was fine but a friends was noticeably yellower.

Not sure if anyone ever had any success in getting theirs swapped if they had the yellowing issue.
S

Mine is noticeably yellow in comparison to my old iphone, in fact I am not very impressed with the iPhone 3G, I think I will keep my old one.

edesignuk said:
uh oh...this can't be good. The start of another major QC issue? Say it ain't so!

Hope you are able to get it replaced.
Click to expand...

Yeah, I'm not happy. Now I've got to go and take it back to Carphone Warehouse and start a repair/replacement process. God knows how long that'll take with the current shortages. At least I have my original iPhone though.

CPW are probably already sick and tired of me, spent most of the morning there!!

Wow! this yellow screen crap is devastating. Sorry for this! Here we go again...

OH NO! This is bad news. Sucks you have to bring it back..

I hope this isn't an epidemic...
E

i work at o2 and my mate is from cpw, all screens i have seen so far (6) are yellow compared to 2g version

Spanky Deluxe said:
Yeah, I'm not happy. Now I've got to go and take it back to Carphone Warehouse and start a repair/replacement process. God knows how long that'll take with the current shortages. At least I have my original iPhone though.

CPW are probably already sick and tired of me, spent most of the morning there!!
Click to expand...

so apple did say that this is a defect ?
D

I have the yellow screen too. It is better in terms of contrast, but is suffering from the yellow tint.
C

Waiting for City Link to deliver mine, fingers crossed if theres yellowing it's not too noticeable. Will report back..
D

I think I've got it too. Maybe it's normal?
C

I wonder if this is caused by the firmware and can be fixed via an update?
S

I haven't activated yet (waiting for my new number and then will transfer all texts etc), but just looking at the "Connect to iTunes" screen, it looks yellow compared to my original iPhone. With the current shortages, there's probably not a lot of point trying to take it back now. I'll wait a few weeks and then go in and complain. As far as I'm concerned a yellow screen is a defective unit. This is a premium phone and you should expect premium standards.

Anyone NOT have a yellow screened iPhone?
B

cherbert said:
I wonder if this is caused by the firmware and can be fixed via an update?
Click to expand...

I don't think so, anyone know becasue they've cut on a few things since the credit crunch started that this was coruced by it?

I can understand that some iPhones will have a defect of some sort, and I'll usually tell them that no company is perfect. However, it sounds like a very large proportion of people have this problem.
W

Abstract said:
I can understand that some iPhones will have a defect of some sort, and I'll usually tell them that no company is perfect. However, it sounds like a very large proportion of people have this problem.
Click to expand...

At least you can be sure that a 100% of the people that have reported this problem will have it. Unfortunately that does not say much
C

Now I'm even more nervous waiting for my delivery. When I get it I'll post my results of the Daz Doorstep Challenge.
D

maybe its not a defect and all 3G phones have yellow screens... crappy screens to cut the price?
C

Same thing here too. I thnk its something that I could get used to. And since it seems to be a problem with a lot of units I would imagine that Apple will either do a massive recall (and woudl assume they would send new handsets out before sending one back - so no disruption of use) - or fix it with a software update.

I rekon its a software issue myself.
N