iOS developer Will Strafach posted a Tweet a few minutes ago stating that the iPhone 5 and the updated iPod touch reportedly due for introduction at tomorrow's media event will support a new panorama photo mode that will enable users to capture multiple photos that can be automatically stitched together into a single panoramic image.

[iPod touch] also has that Panoramic photo feature enabled as far as I know. I think the new iPhone does as well.
Click to expand...

Strafach has since deleted his Tweet, but says that he deleted it because the information was already known, not because it was inaccurate. iMore's Rene Ritchie says that he heard similar information earlier this year but was unable to confirm it at the time. 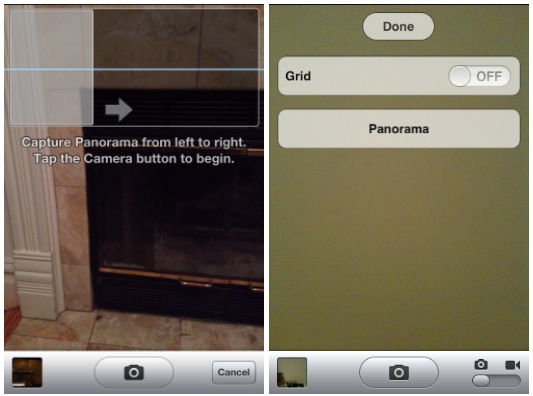 Hidden panorama mode in iOS 5​
The panorama mode is not entirely new, as it is already hidden in iOS 5 and can be activated on jailbroken devices. Performance was said to be relatively poor at the time of its discovery last year, so it seems that Apple has made significant improvements if it intends to release it as a public feature on its new hardware.

A number of third-party apps such as 360 Panorama and Microsoft's Photosynth already offer similar capabilities, but Apple including packaged within the default camera app on the new iPhone and iPod touch would be a significant boost for panoramic photography.

It's a nice addition, but it's hopefully one of the "300 new features!" rather than a headline one, IMO.
B

Cool! This would be a really nice feature!

Makes sense with the longer screen.
B

Makes you wonder what else is already in our devices but is hidden too.
T

Hope this is not the iPhone 5 exclusive feature!!
N

You know Apple will only allow this to run on new devices for no tangible reason...

Virtualball said:
It's a nice addition, but it's hopefully one of the "300 new features!" rather than a headline one, IMO.
Click to expand...

They made a big deal about HDR, so I wouldn't be so optimistic. However, they also didn't show it at the iOS 6 event, so they could be restricting it to new phones for a dumb reason.

this is definitely gonna be a flagship feature....

I could see them saying "this is only available on 5th gen. iPod touch and new iPhone because of the added screen real estate"

but I definitely welcome this! along with an improved camera.
D

This is it people. This is the 'killer' feature. Prepare yourselves.
N

Please don't let this be one of the "key" new features.
S

I can't wait to take a panoramic shot of my fireplace too!

will do better than this. I'm sure it is just a footnote.
A

Except it at least has the latest OSes when they are released
Last edited: Sep 11, 2012

Microsoft's Photosynth is actually pretty good, but a built-in Panarama feature will be pretty nice to have.

Would make sense to debut it with the new longer iPhone, but doubt it'd stop me using the 360 app - it's got some great features including uploading so you can have an interactive photo online

i had a feeling this was coming - 4 or 5 different third-party panorama apps have gone on sale for free over the past couple of weeks.
A

will do better than this. I'm sure it is just a footnote.
Click to expand...

Rumours dont spill all the beans at one go. Only small chunks come bit by bit. People have yet failed to realize this and claim that the iPhone 5 is underwhelming.
B

adildacoolset said:
Except it at least has the latest OS from day 1
Click to expand...

kirky29 said:
Would make sense to debut it with the new longer iPhone, but doubt it'd stop me using the 360 app - it's got some great features including uploading so you can have an interactive photo online

Yeah, I scored that when it was the Free App of the Week. The static images are pretty neat, but the interactive ones through the web service are very slick.
A

Sorry. I meant to say that at lest the iPhone 5 will have the latest OSes WHEN THEY ARE RELEASED
G

This article brings up a point that I'm very curious to see tomorrow. The camera. The iPhones have always had pretty good cameras and as someone who enjoys photography (Real photography, not pics of my food and pets multiple times a day) I am curious to see what they bring to the table in this new phone.
You must log in or register to reply here.
Share:
Facebook Twitter Reddit Email Share Link
Register on MacRumors! This sidebar will go away, and you'll see fewer ads.
Sign Up
Top Bottom