While Apple announced record-breaking iPhone launch weekend sales of nine million units earlier today, the company did not break down relative sales of the iPhone 5s and iPhone 5c. Analytics firm Localytics has, however, shared some data on usage, revealing that among U.S. users the iPhone 5s is being seen 3.4 times as often as the iPhone 5c.

In less than 3 days, the iPhone 5s and 5c combined now represent about 1.36% of the total numbers of all iPhones activated in the U.S. market across the top 4 carriers AT&T, Verizon Wireless, Sprint and T-Mobile. From the data we are seeing, 1.05% of all iPhones in the United States are now iPhone 5s and just 0.31% are iPhone 5c. That means that the iPhone 5s outshines the 5c by a factor of 3.4x, a clear indicator that the early adopters are favoring the high-end 5s compared to 5c.
Click to expand... 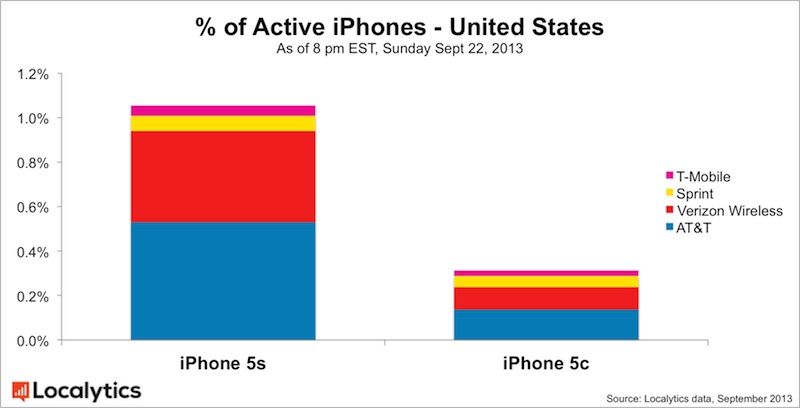 International data shows a similar pattern according to Localytics, with iPhone 5s usage outpacing that of the iPhone 5c by 3.7x, with some countries such as Japan seeing ratios of as high as 5x.

While Apple made the iPhone 5c available for pre-order and has had fairly strong stocks of the device in its retail stores, the iPhone 5s has seen significant shortages, with online orders through Apple's U.S. store currently being quoted October shipping estimates. Gold and silver iPhone 5s models have been in particularly short supply, with even Apple's own retail stores having almost no supply of those devices on launch day.

The disparity in popularity between the iPhone 5s and iPhone 5c is unlikely to persist over the long-term, as the iPhone 5s is more likely to be the device of choice for early adopters who made the effort to purchase the device on the launch weekend, while the lower-cost iPhone 5c will likely improve its relative performance over time as the bulk of customers who are likely to be more budget conscious purchase new phones as they become upgrade eligible.

This doesn't surprise me. Almost everyone in the line I was in was there for a 5s. But I did see quite a few people buying both.
P

Hopefully Apple realises that they priced the iPhone 5C too high and we actually get the low-cost iPhone we all wanted.

Higher priced phone is more popular? More evidence pointing to why Apple does not need to make a "cheap" phone.
A

First weekend sales will skew heavily towards the latest phone - that said, 2-3 mn 5C sold is a big win for Apple. At the end of the day, the margins are likely similar, so Apple is probably agnostic towards the split

I wonder if Apple will ever release their comparison stats of their own on this. Regardless, 3.5x difference is huge!

dlewis23 said:
This doesn't surprise me. Almost everyone in the line I was in was there for a 5s. But I did see quite a few people buying both.
Click to expand...

This will even out overtime I can almost guarantee. Launch week people always by top of the line but now when the average persons becomes eligible for updates they will probably go to the 5c for the cheaper price. Personally I held a 5c and found it to be the nicest feeling phone I've ever held for feel and looks
C

applesith said:
Higher priced phone is more popular? More evidence pointing to why Apple does not need to make a "cheap" phone.
Click to expand...

No, evidence that the 5C is not cheap enough.
A

*Batman* said:
I wonder if Apple will ever release their comparison stats of their own on this. Regardless, 3.5x difference is huge!
Click to expand...

Probably a bigger difference between the 5 and 4S last year.
C

I dont know. I cant read and them colors be distracting. And why are there weird colors on the bars? I like pie. Both products are fail.

Price. Everyone here called it.

applesith said:
Higher priced phone is more popular? More evidence pointing to why Apple does not need to make a "cheap" phone.
Click to expand...

Only because the 'cheap' phone was also very expensive. If it was priced at ~£300-350 off contract, it would sell like hot cakes.

They probably sold about 2 million 5c's. That's not too bad considering it's last year's phone, wrapped in plastic and re-marketed.

Being outsold 3.5 times isn't a fail when there were 9 million phones sold in 3 days.
S

This is really to be expected. Who is going to clamour to get their hands on a phone that has essentially been out for a year?
A

cambookpro said:
Only because the 'cheap' phone was also very expensive. If it was priced at ~£300-350 off contract, it would sell like hot cakes.
Click to expand...

And Apple would make little-no margin on the phone... Unless they downgraded the phone internals
S

No surprise. They're both excellent models for their respective target markets.

If people think about this, it isn't all that surprising.

What type of person will be waiting in line for a new iPhone - the type who wants the latest and greatest, aka the iPhone 5S.

Down the line, however, the 5C will likely catch up in popularity as those looking for a "cheaper" upgrade could go for the colorful, durable 5C option.

Way to early to call the 5C a fail or flop as we have no yet reached the time period/consumer base for which the phone was intended.

This is just in the US, that should probably be in the title

Adelphos33 said:
And Apple would make little-no margin on the phone... Unless they downgraded the phone internals
Click to expand...

5c should be 4s internals with 4" screen and Lightning.
N

Obviously anyone who can't wait and needs to buy it on the first day is someone who won't settle for anything but the top of the line phone.

But all those people who just happen to need a new phone, are probably going to get the cheaper one when its time.
D

The difference between the 5c and 5s is negligible. Why would you buy a phone with last year's tech, unless there is some benefit in doing so, like the price...

Also the colours are pretty horrible. Only the white one would be subtle enough for most normal people.
A

5c should be 4s internals with 4" screen and Lightning.
Click to expand...

Nah - better go with 5 internals as they want to sell this phone effectively for 2 years or more. People can continue to buy the 4S if they choose.