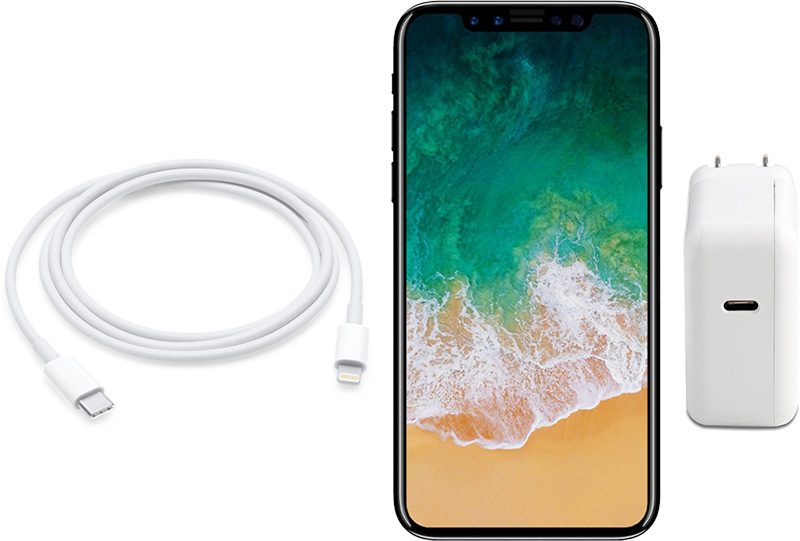 "iPhone 8" mockup by Benjamin Geskin for iDrop News​
Lending credence to that rumor, Barclays analyst Blayne Curtis today in a research note said the so-called "iPhone 8" will come bundled with a 10W power adapter with a USB-C connector and an integrated USB-C Power Delivery chip.

Curtis said the USB-C Power Delivery chips built into both the iPhone and 10W power adapter will be supplied by Cypress Semiconductor. The research note suggests it'll be the same CYPD2104 chip used in the new 10.5-inch iPad Pro.

An excerpt from the Barclays research note distributed to clients, obtained by MacRumors and edited slightly for clarity:

We believe that in the iPhone 8, Apple likely includes Cypress Semiconductor's USB-C Power Delivery chip in the phone and an additional chip within the power brick in box (likely a new 10W, which would use a more integrated solution with Cypress Power Delivery).
Click to expand...

Like the new 10.5-inch and 12.9-inch iPad Pro, the so-called "iPhone 8" would be capable of fast charging with a Lightning to USB-C cable connected to the new 10W power adapter or Apple's 29W USB-C power adapter for MacBook.

Given the "iPhone 8" is expected to have around a 2,700 mAh L-shaped two-cell battery pack, faster charging would be a welcomed addition. The device is also widely rumored to feature wireless charging on top.

Queue the complaints from MR readers that they'll have to switch from all their current iPhone chargers. Faster charing is horrible!!!!!
Reactions: Ghost31, secretbum, dsh3 and 12 others
K

It looks like a proprietary power delivery solution, meaning that like the iPad Pro you would not get faster charging with just any USB-C charger. USD-PD standards are 9W and 15W for mobile devices.
Reactions: Avieshek

Along with wireless charging hopefully. Either way, faster charging will be a much-appreciated upgrade.
Reactions: ILikeAllOS, ATC, Internet Enzyme and 5 others
M

It seems worth replacing my iPhone 5 this time.
Reactions: Vanilla35 and Avieshek
C

I like this change. However I do hope it turns out to be a 15 W adapter.
Reactions: Avieshek

Now if only they had included the 29w charger with the new iPad Pro's...
Reactions: Jd3774life, coolbreeze, argentum47 and 10 others

They need to use USB-C on both sides of the cable, and not USB-C to Lightning. Just my opinion (and a lot of other peoples based on comments I've heard and read throughout the past couple years)
Reactions: Jd3774life, h3ysw5nkan, Aston441 and 16 others

Took a bit long for the company who promised USB-C was the future!
Reactions: Ghost31, Aston441 and Avieshek

Why can't they just move to using USB-C on the iPhone itself? Sure there will be some wailing and gnashing of teeth for a bit, but it'll finally standardize phone charging across the industry.
Reactions: Jd3774life, Aston441, twhart and 14 others

Finally the iPhone will be getting long awaited features and updates.
Reactions: tridley68

They are going to 10W and not 12W which would be perfect for charging iPads also? Thanks Apple!
Reactions: Avieshek

Why wont you just bite the bullet and go full USB-C to USB-C on the phone? I'd gladly plop down money on a good set of USB-C headphones but nooooo. You're going to force lightning headphones on us and then make us purchase another set for the macbook pro.
Reactions: Aston441, twhart, pyesy and 5 others
K

The current iPhones already support charging with a 10/12w charger so this isn’t that good. It’s no different to chucking the existing iPad charger into the iPhone box.

If the iPhone 8 supported 29w charging like three iPad Pro then that would be true fast charging.
Reactions: tooloud10, Aston441, Avieshek and 6 others

OldSchoolMacGuy said:
Queue the complaints from MR readers that they'll have to switch from all their current iPhone chargers. Faster charing is horrible!!!!!
Click to expand...

Faster charging, of course no one can argue. But this is a PITA for frequent travelers who now have to bring along another brick. Hopefully 3rd parties are on the move with a 2 port USB-C + 2 port USB-A travel charger.

Also what the heck happened to the supposed inductive charging that the iPhone 8 was suppose to have.

What happened to "wireless charging"?
Reactions: Aston441 and ILikeAllOS

DaveWotzit said:
What happened to "wireless charging"?
Click to expand...

Different subject altogether. Even when wireless charging is introduced, the phone will still have the capability of being charged via cable. Just like every other wirelessly charged phone. Faster cable charging is a sweet plus regardless of any wireless capability.
Reactions: Ghost31, ILikeAllOS, Oblivious.Robot and 6 others

LOL rendering all previous cables I have collected useless yet again.
Reactions: mthomas184

Finally, an iPhone rumor that is practical and has a real possibility of coming to fruition... that completely fabricated rendering of the new iPhone aside. Though I guess a photo of just a power brick with a USB-C port isn't quite as exciting.
A

OldSchoolMacGuy said:
Queue the complaints from MR readers that they'll have to switch from all their current iPhone chargers. Faster charing is horrible!!!!!
Click to expand...

As long as the phone continues to use Lightening I don't care! I have dozens and dozens of cables.
Reactions: tooloud10, ILikeAllOS, t1meless1nf1n1t and 2 others

They changed the original connector after 5 years. The current connector has been around for 5 years. Its about time to upgrade everything to USB-C. It will also encourage companies to start making USB-C a standard for every device so Macbook Pros can be used with more devices without dongles sooner rather than later.
Reactions: Internet Enzyme, Brien, Mr Dobey and 2 others
You must log in or register to reply here.
Share:
Facebook Twitter Reddit Email Share Link
Register on MacRumors! This sidebar will go away, and you'll see fewer ads.
Sign Up
Top Bottom