iPhone Captured 31% of Smartphone Sales in the U.S. Ahead of Holiday Season

The iPhone 7, iPhone 7 Plus, and iPhone 6s were the "three most popular smartphones" in the United States in the three month period ending November 2016, when users were purchasing early holiday gifts for friends and family members. According to new data collected by Kantar Worldpanel, the three Apple iPhones captured a total 31.3 percent of smartphone sales in the U.S., while Samsung accounted for 28.9 percent of smartphone sales during the three month period. 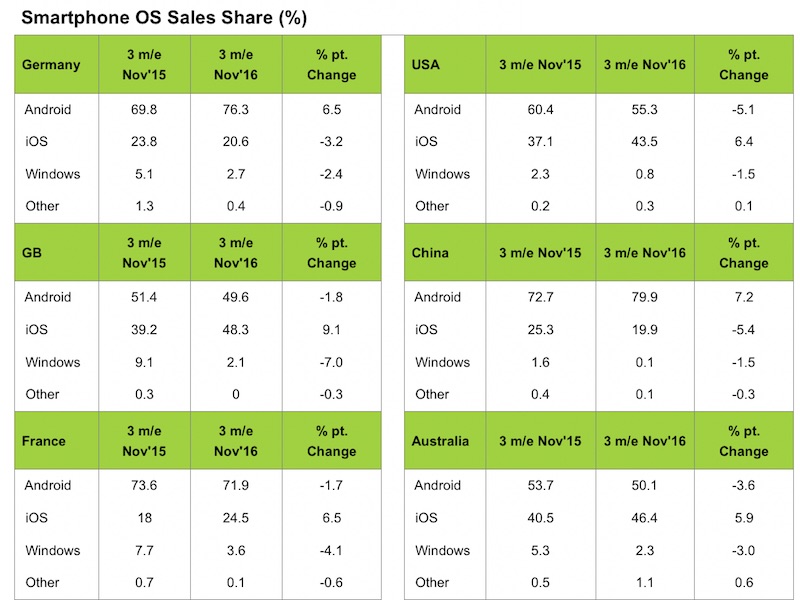 Kantar's data shows that iOS made gains across most regions around the world in the same September to November period, despite a few losses in Germany and China. Apple's mobile operating system saw the biggest year-over-year increase in Great Britain, where it jumped 9.1 percent to account for 48.3 percent of the smartphone market in the country. Both Android and iOS increased their presence across France, Germany, Italy, Spain, and Great Britain, "largely due to the decline of Windows," according to Kantar.

"In the EU5 countries, Android accounted for 72.4% of smartphone sales during this period, with iOS at 24.6%, a strong year-on-year uptick for both ecosystems as Windows' share declined to 2.8%.

For Android, this represented a 2.8 percentage point decline from the October period, while strong sales of iPhone 7 boosted iOS," explained Dominic Sunnebo, Business Unit Director for Kantar Worldpanel ComTech Europe. "The holiday period is always strong for Apple, but it remains to be seen if demand for the latest devices will level out in the first quarter of 2017."
Click to expand...

Despite dropping 5.4 percent in China from the year-ago quarter, Kantar pointed out that iOS market share did in fact increase slightly (by 2.8 percent) from the previous three-month period thanks to the launch of the iPhone 7, which became the best-selling device in Urban China. "Local brands continued to dominate the market," according to Kantar analyst Tamsin Timpson, and Android accounts for a massive 79.9 percent of the smartphone market in the country in comparison to Apple's 19.9 percent presence.

Despite Apple's iOS growth in places like Australia, Japan, and even the U.S., recent reports surrounding the company's manufacturing partner Foxconn have pointed towards "lukewarm" demand for the iPhone 7 as a major cause for the assembler's first-ever profit decline. Apple reportedly shipped 207 million iPhones in 2016, down from 236 million in 2015, but many hope the company can turn around from its own revenue downturn with a profitable 2017 and a major redesign for the "iPhone 8."

Article Link: iPhone Captured 31% of Smartphone Sales in the U.S. Ahead of Holiday Season

Imagine the growth if it was something new instead of a rehash.
Reactions: geoff5093, Soccertess and Glideslope
Comment

Bu... bu... but that's all smartphones. Not just premium. Where's the report on flagship phones? On profit?

"Why do you want those reports?"

It's no wonder financial institutions in Germany aren't in any rush to sign up with Apple Pay ... no one's buying iPhones.
Reactions: Cameroncafe10a, Soccertess and AleRod
Comment
2

it is amazing to me how it has become a two OS race at this point. MS has taken a better direction since the CEO change, but it sure is not showing up in phone sales.
Reactions: Jamalien, Cameroncafe10a, BvizioN and 3 others
Comment
6

RedOrchestra said:
It's no wonder financial institutions in Germany aren't in any rush to sign up with Apple Pay ... no one's buying iPhones.
Click to expand...

Uh this post actually states the opposite. What the article is saying is one manufacturer holds nearly a 1/3rd of the market. That's one manufacture out of how many???? If this same article was saying Samsung or Nokia sold that many. It would be an equally impressive feat.
Reactions: blackcrayon, BvizioN, Mattlike and 2 others
Comment

So what are these numbers again?

Good news overall. It would be interesting to see analysis of why the numbers are the way they are.
Comment

The lower the better. Keeps them in check.

Geez I'm far from an optimist but I can still see positive numbers when they exist. I guess I'm just missing something.
Last edited by a moderator: Jan 12, 2017
Reactions: justinhill, fourthtunz, Sasparilla and 9 others
Comment

Bigsk8r said:
Good news overall. It would be interesting to see analysis of why the numbers are the way they are.
Click to expand...

Phil isn't doing a good job of letting people know the iPhone is unmatched. Some people don't know and bought an Android by mistake.
Reactions: justinhill, Jamalien, Azmodan79 and 5 others
Comment
R

macfacts said:
Phil isn't doing a good job of letting people know the iPhone is unmatched. Some people don't know and bought an Android by mistake.
Click to expand...

Lol - "but guys the iphone was the most popular phone!"
Comment
R

This translates in almost complete domination of the high-end (the only segment Apple competes in).

This also means that, Apple losing their collective heads and starting to compete in all segments, they could reach a monster worldwide market share and basically destroy Android. But that would be unwise for several well known reasons.
[doublepost=1484151958][/doublepost]

Yes, Apple is doomed... but not this week at any rate.
Reactions: BigMcGuire
Comment
R

At the beginning they were the only.
Reactions: macfacts
Comment

djcerla said:
...
Nowhere near that.

And Apple never had anywhere close to 100%.
Click to expand...

Apple had the first smartphone. That means they had 100℅ of that market.
Reactions: navaira and AleRod
Comment