The latest data from digital media analytics firm comScore shows that Apple continues to increase its lead over Samsung, LG, Motorola, HTC and other handset makers in U.S. smartphone market share, less than one week before the launch of the iPhone 6s and iPhone 6s Plus.

iPhones captured 44.2% market share among U.S. smartphone subscribers aged 13 and older based on a three-month average ending July 2015, an increase of 1.1 percentage points over the preceding three month average. 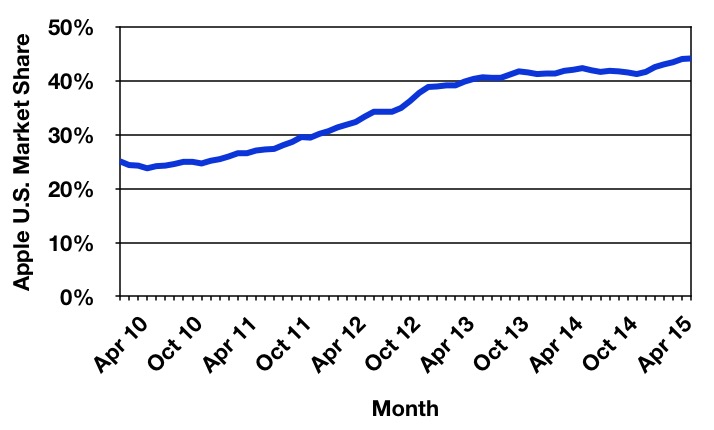 Android remained the most widely adopted smartphone platform in the U.S. with 51.4% market share based on the July 2015 data, trailed by iOS with 44.2% market share. Windows Phone, BlackBerry and Symbian accounted for 2.9%, 1.3% and 0.1% market share in the U.S. respectively. 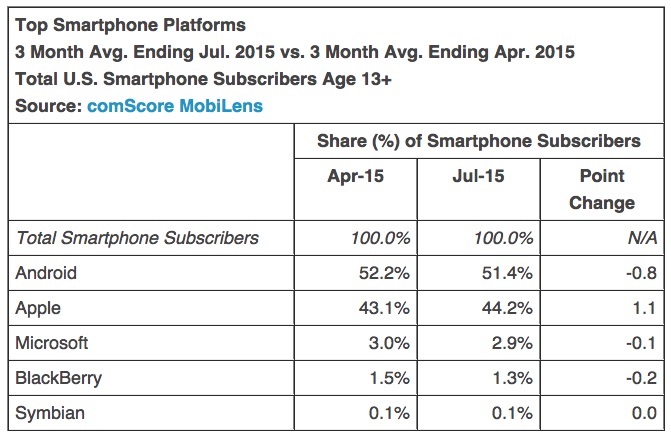 Apple is set to announce the iPhone 6s and iPhone 6s Plus at its September 9th media event in San Francisco.

There we go! A left to right table. Some of the tables posted on here look like they were originally designed for Arabic.
Reactions: Nebulance and mw360

What about world marketshare? Which amounts to a majority of handsets sold?
H

Considering Apple, (and certainly most of the MR fanboys), supposedly hate Google/Android, there's an awful lot of their stuff in the top 10.
Reactions: iOSFangirl6001

There's a Sybian in there?

JeffyTheQuik said:
There's a Sybian in there?

You're soooo wrong. As am I for laughing.
Reactions: JeffyTheQuik
H

69Mustang said:
You're soooo wrong. As am I for laughing.
Click to expand...

It took me a minute, but yeah I got it too.
Top marks.
Reactions: JeffyTheQuik and 69Mustang

Edgar Spayce said:
What about world marketshare? Which amounts to a majority of handsets sold?
Click to expand...

I think since many third world countries have "smartphones" in use that are actually so low specced, they are actually simply basic phones... we've all realized that info from the United States is FAR more telling as to what is going on momentumwise in the high end smartphone world.
By all means though, if you personally are interested in a metric that is completely meaningless to any of the rest of us here... go seek it out!
Just don't be surprised that it won't make an article here, as it is irrelevant to us and the things we discuss here.
Reactions: MrUNIMOG, perkedel and aajeevlin

H2SO4 said:
Considering Apple, (and certainly most of the MR fanboys), supposedly hate Google/Android, there's an awful lot of their stuff in the top 10.
Click to expand...

Apple Employees and people who post on MacRumors forums are a very small minority of all iPhone owners.

Going through my own iPhone, the only app from Google on it is Google Maps which I don't recall the last time I used. It was at least 10 weeks ago, given that Cellular Data usage shows that I haven't used it since the last time I reset those statistics.
Reactions: MrUNIMOG and FightTheFuture

And a lot of people, including myself, will be upgrading from the 5s to the 6s. Just have to wait for my upgrade.
Reactions: Jovijoker, redheeler, b1wils1 and 3 others
A

Funnily enough one of the reasons is a slowdown in Chinese sales, I posted on here that China was one of the main reasons the iPhone 6 did so well as it was a new market to Apple.

So it will be interesting to see what happens.

No one says a peep, critically, about the company assembling the data... when the data agrees with what they believe
Reactions: Chicki, CarpalMac, thering1975 and 2 others
T

Considering the limited hardware vs the Android camp, that's really impressive. Android is on so many phones it's almost a synonym for "non-Apple phone".
Reactions: MrUNIMOG and WWPD

JeffyTheQuik said:
There's a Sybian in there?

The leader in smartbone technology.
S

We're in a different security environment (for smartphones) than we were 4 years ago and Android and Windows Phone (unless Microsoft drastically changes thing with v10 for mobile) update process aren't designed for the current environment. For Android and Windows Phone the hardware makers and then the service providers each have to take part in integrating and then rolling security patches out that come from Google / Microsoft - and both have little financial interest in doing so...and generally don't).

I would expect the iPhone and Apple's long term support (4 years of OS & security updates) of their hardware (most Android is a year if that) will continue to gain market-share as Android and Windows Phone current update model just won't work in this environment where security updates need to get out quick, often and keep doing so for years.

Seems like Blackberry is about the only other mobile OS vendor that can do something similar to Apple (although they need to be around to do so). Over time this will have some affect on the user numbers. JMHO...
Last edited: Sep 3, 2015
Reactions: WWPD and FriendlyMackle

H2SO4 said:
Considering Apple, (and certainly most of the MR fanboys), supposedly hate Google/Android, there's an awful lot of their stuff in the top 10.
Click to expand...

That makes no sense. Of course there is because there are not any other options.
Reactions: MrUNIMOG
T

this is just one view..

apolloa said:
KGI Securities stated though that the iPhone 6S sales will not grow beyond the iPhone 6:

Funnily enough one of the reasons is a slowdown in Chinese sales, I posted on here that China was one of the main reasons the iPhone 6 did so well as it was a new market to Apple.

So it will be interesting to see what happens.
Click to expand...

And people will freak the fsck out.

But at that point... Apple will be selling iPhones at a rate of well over 250 million units every year... so it's not like they will be going bankrupt or anything.

Apple figured out the secret:

1. Sell a fsckton of phones
2. Make a lot of money on each phone sold

Most companies do neither.
Reactions: MrUNIMOG and Solomani

monaarts said:
Seriously. I want iPhone market share to drop 25% and then Tim Cook announce a poor performance quarter - then, just MAYBE, my stock will increase. :-(
Click to expand...

LOL! It sure feels like that's what's got to happen sometimes!