iPhone SE Priced at Premium in Australia and Elsewhere

Apple announced the iPhone SE yesterday for $399 in the United States, which is the most affordable price point it has ever introduced an iPhone at. But in many other launch countries around the world, the new 4-inch smartphone carries a premium beyond foreign currency exchange rates and sales taxes. 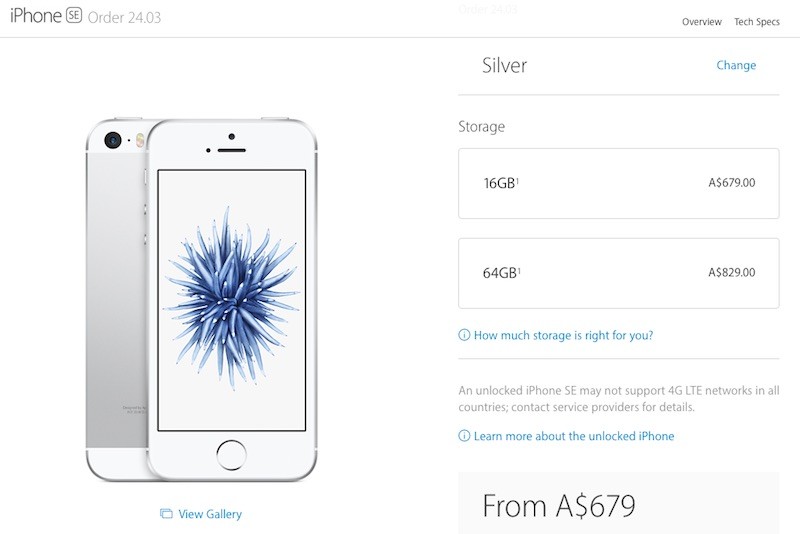 In Australia, the iPhone SE starts at roughly $679 AUD for the 16GB model, despite $399 USD amounting to around $525 AUD based on the current exchange rate. The price equals about $617 before GST, so Apple is charging about $62 more beyond the exchange rate and Australian sales tax.

The price difference is similar in Canada, where the iPhone SE starts at $579 compared to a currency adjusted price of around $522. The 64GB model also carries about a $55 premium over U.S. pricing. Unlike VAT in some countries, Canadian sales tax is added to these prices at the time of purchase.

In the United Kingdom, customers will face around a £20 to £25 premium for the iPhone SE after accounting for VAT and the current $ to £ conversion. The forex market has been highly volatile in recent months, so these prices could change accordingly.

iPhone SE prices are inflated in a number of other European countries, including France, Germany, Italy, and Spain, where the 16GB and 64GB models cost €489 and €589 or more respectively with applicable VAT and other fees added. Comparatively, $399 and $499 USD currently equal around €355 and €444 respectively.

Apple, which reports its quarterly financial results in U.S. dollars, typically adjusts foreign prices based on currency exchange rates, while import charges and duties, VAT, taxes, licensing, and other fees can affect global prices. But even when accounting for those factors, the iPhone SE still appears to be priced higher in many countries.

This is going to get ugly.
Reactions: skinned66, AleXXXa, bwillwall and 2 others

As far as I know that's the case with pretty much every Apple product... Take the Apple Watch for instance, it starts at $299 in the US, but it's €349 in Europe...
Reactions: MaximizedAction, navaira, Sea Bass and 1 other person

How much of a premium is the iPhone 6S there compared to the U.S.? If it's roughly the same, then why is this news?

Yep. ¥52,800 (about $475) not including tax here in Japan (where we don't even have ApplePay, which I think is the most compelling new feature). I'll definitely be hanging on to my 5s for a while longer.
Last edited: Mar 22, 2016
Reactions: AleXXXa, acidsoul and Simche

Are the European prices before or after tax? If they're after-tax, it's not that surprising considering VAT can be upwards of 20% in France and just slightly less in other European countries.
Reactions: Sea Bass, Jamalien, Robert.Walter and 3 others
7

I appreciate the fact that you posted this.. if it can wake them up, that would be a good thing.
Reactions: justperry, macaximx, caskin8a and 12 others
P

MacRumors said:
iPhone SE prices are inflated in a number of other European countries, including France, Germany, Italy, and Spain, where the 16GB and 64GB models cost EUR489 and EUR589 respectively plus applicable VAT and other taxes
Click to expand...

I think taxes and VAT are already included in these prices.
Reactions: manu chao, 0970373 and georgeperez
P

lysingur said:
Are the European prices before or after tax? If they're after-tax, it's not that surprising considering VAT can be upwards of 20% in France and just slightly less in other European countries.
Click to expand...

Prices in Europe are WITH 21% taxes!! (article is wrong there) Without tax, it's €404.
Reactions: Sea Bass, manu chao, kometen and 2 others

Why is this even a story? US don't include sales tax which is why they seem a lot cheaper than other countries pricing.
Reactions: Keane16, Sea Bass, timeconsumer and 5 others

Disgraceful, Apple. Discriminatory. An old design, rehashed and insanely expensive. Horrible, Apple. There's no justification for this considering profits. Hope the Australian government tax the pennies out of this company 30% for the past ten years of trade.
Reactions: skinned66 and AleXXXa

Can Apple help this? I don't think so. It depends on the tax in the various countries. Anything to have a go at Apple huh?
Reactions: Sea Bass

So yes there is a little premium attached to it of £23 but not as bad as the article makes out.
Reactions: Sea Bass, 0970373, kometen and 8 others

UK prices include sales tax (VAT at 20%), but USA prices do not their sales taxes. This accounts for £60 of the £80 to £90 difference. It is still a difference, but not as bad as many other companies that do a direct $1 to £1 conversion.
F

It should be expensive. The low price of the iPhone in the United States is just a perk.
Reactions: Lost Rider
M

geoff5093 said:
How much of a premium is the iPhone 6S there compared to the U.S.? If it's roughly the same, then why is this news?
Click to expand...

And the "huge" discount on the apple watch is not present in Germany.

That's a huge difference, despite taxes not being included in the US purchase.
Reactions: AleXXXa
6

Do they accept bits of string?
A

I wonder are the shipping costs higher or is there higher taxes or something else compared to the US? Maybe the exchange rate is the problem.

Unfortunately, my head was in the clouds.

I love Apple products as much as anybody on here however, their whole 'universal conversion rate' with the American Dollar is poor to say the least.
You must log in or register to reply here.
Share:
Facebook Twitter Reddit Email Share Link
Register on MacRumors! This sidebar will go away, and you'll see fewer ads.
Sign Up
Top Bottom