Media research firm Nielsen today released its lists of top U.S. mobile phones, sites, and brands for the first ten months of 2009, and the iPhone 3G took the top spot among mobile phones with 4.0% of the market. The iPhone placed slightly ahead of Research in Motion's BlackBerry 8300 series at 3.7%, and well ahead of the remainder of the pack, which was led by Motorola's RAZR V3 series at 2.3%. 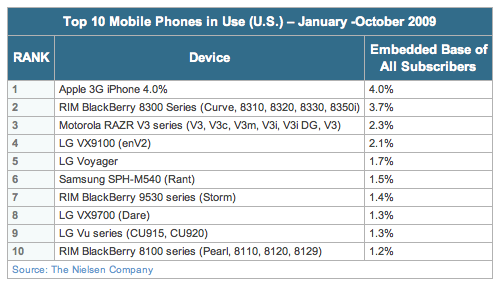 Apple also made an appearance on Nielsen's list of top ten brands accessed via mobile networks for the January-September 2009 timeframe, taking tenth place on a list topped by Yahoo! and Google. 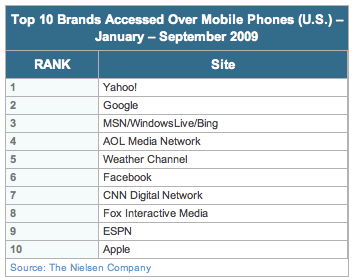 Not bad for a newcomer to the cell phone industry.
Comment

So they didn't separate the 3G and 3GS numbers, but they kept the RIM models apart?

Or are they saying nobody uses the 3GS?
Comment

ShiftyPig said:
And yet Apple would fall over itself to trade numbers with RIM.
Click to expand...

1)They separate the Blackberries into 3 categories? Why? The chart is absent of any descriptions of how they came up with categorization.

2)Cell phone users are chained to their 2 year contracts...so if I bought a new $99-$299 phone with a 2 year plan, I'm gonna keep the darn phone for at least 2 years. Pretty obvious.


Poor description...how is anyone, anywhere, supposed to come to any conclusions here? And 4% being the "top" is nuts. Big deal, 30 days from now #2 can be #1 and #1 can fall to #3. There are so many cell phone manufacturers and cell carriers that this chart greatly fails to do justice for the readers.

The chart isn't about operating profit.

Your response earns a D+ for being well off-point, and an F goes to the individual who censored my post.
Comment

Besides, Apple and RIM numbers are nearly the same. And they're about to get a helluva lot closer this quarter.
Comment
M

Look at the dates. It is only from Jan-Oct. The 3GS wasn't even available until June. It hasn't been available long enough to produce enough data to make that list.
Comment

Why there is only iPhone 3G listed, don't know.
Comment

ericinboston said:
The chart is absent of any descriptions of how they came up with categorization.
Click to expand...

My question is about WHY they broke them apart. I can see (like you and others) that the chart breaks them apart...but also seems to lump some brands/models/series together. Why?

If the chart is trying to compare exact model #s (or SKU #s) then they failed...because #2 comprises of 5 unique models.

I bought my iPhone 3GS in September yet it is not (or is it?) lumped together with the #1 spot of Apple.

Since the chart fails to clearly articulate what the author is comparing, the chart is useless.
Comment
P

You know what' sad? The fact that the RAZR is still at number 3.
Comment
C

Agreed. I manage a cell phone store and you would not believe how many people come in and still ask for a RAZR. It makes me want to cry.
Comment
E

I had a RAZR for 4+ years...when it died is when I switched carriers and got the iPhone.

That's why I mentioned in a previous post that people are tied to their 2 year contracts...and many, like me, just keep on going once the contract is up...for a variety of reasons such as great coverage, cost, and a working phone that, well, is a phone.

I took various risks in getting an iPhone and am happy to say that I love it. However, I also make about 2 calls a day on it...and from my home....so I am part of the crowd that doesn't make many calls nor travel a lot...and until the iPhone, I've used a cell phone for making calls...that's it. No texting or emails or web or music or that other stuff. iPhones, like Blackberries, should really not be included in a list of "cell phones" on such charts that Nielsen provides...the iPhone is a smartphone or smart device...or something that clearly differentiates it from the billions of "cell phones" that have been on the market for 15+ years.

The iPhone for me is basically a great mini-computer to surf the web or check some sports stats and weather while I am on the couch or in the car. But AT&T's coverage is horrific in the Northeast. If it were better, I would have switched years ago and I'm sure others would have. I know a lot of people that would like to try the $99 or $199 iPhone, but refuse to go to ATT. The 4% number on this chart may have easily topped 10% if Verizon or other carriers were available.

Who the heck are these people who actually use Yahoo??
Comment
L

The most prominant observation from that table is RIM have 6.3% for their suite of Blackberries (lets face it, other than the storm they are pretty much the same give or take the odd feature)

Doesnt mask the fact that the table seems to have been collated and presented by idiots !
Comment
A

Only thing that matters are profits, not market share. Apple makes more profits with less market share then anyone in history has ever managed. This is an innovation all by itself. Whereas, MSFT needs 90% market share to make the same profits!
Comment
E

If you are a stockholder or employee who gets stocks/bonuses, yes.

But for the consumers...we don't give a crap how much Apple "makes" in its profits...just that the products work and that Apple will be around for Support. This is true in any company in the world...people buy from companies they feel offer a product for a fair price and that the company won't be closing its doors in less than a year.

ericinboston said:
My question is about WHY they broke them apart. I can see (like you and others) that the chart breaks them apart...but also seems to lump some brands/models/series together. Why?
Click to expand...

Looking at the details of the phones, it seems to group them by phone series. Each of the phones in a group is very similar to the others, with only minor differences in spec. It's similar to grouping all Toyota Camry models together in a list of top cars. Although there's a Camry SE, XLE, LE, etc, and even more differences in off-the-lot configuration, there's a whole lot more similarity than there is to a Ford Focus or a Dodge Ram pickup.
Comment
5

VanMac said:
Not bad for a newcomer to the cell phone industry.
Click to expand...

Apple's performance is second to none. They have REINVENTED a whole industry again, and the iPhone takes the lead as the iPod and the iTMS did and continue to do in the music industry.

In other words, MS IS DEAD. AND SO IS DELL. Congratulations, Apple!
Comment
A

BRLawyer said:
Apple's performance is second to none. They have REINVENTED a whole industry again, and the iPhone takes the lead as the iPod and the iTMS did and continue to do in the music industry.

In other words, MS IS DEAD. AND SO IS DELL. Congratulations, Apple!
Click to expand...

Non-sequitor. What does iPhone dominance have to do with PCs? Until they can stick an i7 in there, absolutely nothing.
Comment
5

ArrowSmith said:
Non-sequitor. What does iPhone dominance have to do with PCs? Until they can stick an i7 in there, absolutely nothing.
Click to expand...