iPhone User Awarded $850 in Judgment Against AT&T Over Throttling

Associated Press reports that an iPhone user in California has been awarded $850 in a small claims lawsuit filed against AT&T over throttling of data speeds. The user, who was on a grandfathered unlimited data plan, saw his data speeds drastically slashed once he reached 1.5-2 GB in a given month, even as other users on limited 3 GB plans at the same price see no similar restrictions at those levels.

Nadel's ruling could pave the way for others to follow suit. AT&T has some 17 million customers with "unlimited data" plans that can be subject to throttling, representing just under half of the company's smartphone users.
Click to expand...

There is no word yet on whether AT&T will appeal the decision, but the sales manager representing AT&T in the case has argued that the carrier reserved the right to "modify or cancel" or cancel customer contracts if their usage is adversely affecting the company's network capabilities. The article notes that a class action suit might be the normal evolution of such a complaint, but AT&T's subscriber contract prohibits class action or jury trials, leaving arbitration and small claims as the options. 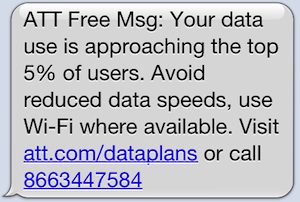 AT&T began throttling unlimited data customers ranking in the top 5% of data users last October. But while early reports of throttling came mostly from high-volume users consuming in excess of 10 GB of data per month, reports of users being throttled at much lower levels in the neighborhood of 2 GB have been increasing. AT&T notes that the throttling is done on a case-by-case basis and only if there are network capacity issues in the customer's area, but for those who are affected, the throttled speeds are slow enough to make their devices nearly unusable.

Update: AT&T issued this statement to MacRumors: "This is a small claims matter. We are evaluating next steps, including appeal. But at the end of the day, our contract governs our relationship with our customers."

Good News, a step in the right direction.
Comment
K

Good for him. About time and hopefully this will get others to do the same. Enough is enough
Comment
A

And people wonder why AT&T was rated worst carrier 2 years in a row. Because they are.
Comment
S

Koodauw said:
Good News, a step in the right direction.
Click to expand...

Score one for customers and proliferation of the Internet.
Comment

At $850, he's doing them a favor so they realize they need to stop doing this or lose customers.
Comment

Class actions are dumb. Only the lawyers win in the end.
Comment

Nice!
Glad to see a judge recognized the BS in how they choose to throttle.

I understand the need in some cases, but throttling unlimited users who are below 3GB but are paying the same price as someone on a 3GB limited plan was begging for a lawsuit.
Comment
T

DerekRod said:
nice Im expecting to receive another class action settlement check in the near future
Click to expand...

Apparently AT&T's subscriber agreement prohibits class action suits. not sure if that's enforceable, but it's there.

I can see this as the beginning of the end for us grandfathered "unlimited" folks. AT&T will use this loss as a reason to just do away with the grandfathered unlimited plans all together.
Comment

Same issue with me. Los Angeles area, last month used around 1.25GB, got a message saying my speeds would be throttled. Pisses me off really, 1/2 of the data ATT sells in their tiered bucket, yet I'm in the top 5% of users?
Comment
L

Clear does the same thing on their 4G service. How can throttling be considered "unlimited?"
Comment

arn said:
Apparently AT&T's subscriber agreement prohibits class action suits. not sure if that's enforceable, but it's there.

Hmm Ive recieved checks for them before,They've been hit with a couple of suits the last one I remember was funnily enough over sim locks
Comment
V

When users get throttled - they should use the RootMetrics coverage app and start running tests.

When the throttled user's slow as molasses data speeds start bringing down the provider's scores then maybe the provider will care more.

Data speed wars are ramping up and having your scores hammered would hurt...
Comment
T

stisdal said:
I can see this as the beginning of the end for us grandfathered "unlimited" folks. AT&T will use this loss as a reason to just do away with the grandfathered unlimited plans all together.
Click to expand...

It's inevitable, I mean could we really imagine ATT still allowing unlimited plans 10 years from now? Hell, they'll probably throttle at 1GB by then.
Comment
W

I signed a petition

I believe this is a great step forward in stopping AT&T Wireless from unfairly charging us for something and then throttling on the speed.

I even signed a petition I found on change.org:
http://www.change.org/petitions/att-data-throttle

Lost of people have signed this and I believe this will help.
Comment
A

Good for him! Now I'm not paying my EFT. We can head to court on this matter.
Comment

valkraider said:
When users get throttled - they should use the RootMetrics coverage app and start running tests.

When the throttled user's slow as molasses data speeds start bringing down the provider's scores then maybe the provider will care more.

Data speed wars are ramping up and having your scores hammered would hurt...
Click to expand...

THIS^^^^^ is an excellent idea,Though im afraid this may be the end of our unlimited data which I believe they have the right to do so in contract.
Comment

AT&T is too cheap to install actual working antennas and stuff so they'll just point the finger at people using a measly 2GB and blame them for the general slowness.
Comment
R

So where did the $850 value come from? Over a 24 month contract, that would be ~$35/month. The plan is $30/month and they have only been throttling for less than a year. Or can you get punitive damages in small claims court?

Edit: I see this now in the source link: "The customer contract specifies that those who win an award from the company in arbitration will get at least $10,000. Spaccarelli picked the same amount for his claim. Judge Nadel instead awarded him $85 for each of the 10 months left on his contract."
Comment

stisdal said:
I can see this as the beginning of the end for us grandfathered "unlimited" folks. AT&T will use this loss as a reason to just do away with the grandfathered unlimited plans all together.
Click to expand...