iPhone X iPhone X is easily the best phone ever made.

Seriously, I very much doubted it to feel as good as it does now - but after owning it for a few weeks, I am convinced that there is no going back. Picking up an iPhone 8 feels heavily dated now. The screen is just so good. Face ID has worked flawlessly under nearly every condition for me thus far and is just more convenient and faster (for me) than Touch ID. True Tone is a true luxury. Blacks are actually black. Eliminating the home button just feels so natural now. Apple has always been the king of gestures, starting with MacBooks, so it just makes perfect sense. I never thought the notch would be a problem but I'd rather it be there than not if it meant having a taller phone or compromising in any other way. Plus I'm confident that it's size will shrink and eventually be eliminated. Either way, I don't care, it doesn't bother me as is.

I am not brand-loyal. If there was a better phone, I'd be using it. I gotta say, the (smaller) Pixel 2 is also a really great phone. If I cared about saving money but still getting an excellent phone, Pixel 2 all the way. But it's so plain and still feels like Android felt five years ago for the most part. And the XL variant has noticeable screen issues. The S8 is an impressive phone as well but it still just doesn't have the polished software experience that the Pixel has (and IMO the X trumps both of them by a long shot in the polish department). While the Pixel has come incredibly close in what it would take for me to switch from iOS to Android, it's just not there yet. The X just set the bar even higher for fluidity between hardware and software.

I don't know who or what this thread is for. Maybe it's for someone on the fence of whether $1K for a phone is worth it. If you're GOING to buy an 8 or 8 Plus and you plan on keeping it for 3-5 years, don't - get the X. The extra amount of $ is worth it for a phone you're going to keep a long time anyway. Obviously if you're in over your head already in consumer debt and are bad with money in general, don't be buying $500+ phones. But for those who were going for a "flagship" phone anyway and it makes sense for them - trust me, the X is that much better. I'm personally coming from a 6, and I keep my phones for 4+ years, so the 8 didn't feel like that much of an upgrade.
Reactions: quietstormSD, Bacong, afir93 and 11 others

I really enjoy using my iPhone X. Best iPhone I have ever had next to the iPhone 4s.
Reactions: iModFrenzy, jbizzybeetle, nortonandreev and 10 others
T

If the X and 8+ were both $800, I'd still get the 8+. It feels better to me. I don't care about any of the common complaints on the X. Don't mind the price, notch or face id. I just like the feel of the 8+ in my hand, and the fact that it gets better battery life. I admit it looks very dated with the bezels, but mine is space grey so they're not as noticable.
Reactions: ARizz44, ForumChick, 204353 and 10 others

Agree. I don't think Apple has got nearly enough credit for how well they did with the X. It's just phenomenal, and the underlying tech still blows me away.

If someone told me a few years ago that I'd soon have an iPhone in my pocket that could recognise my face with near-perfect accuracy and reliability - even in the dark - I'd have laughed and called them crazy. Yet here we are...
Reactions: YaBoiD, afir93, jbizzybeetle and 12 others

Completely agree. I don't think I would ever be happy with the bar at the top and bottom now that I am use to the iphone X
Reactions: Jetcat3, GeeMillz22 and raqball

As to the OP post, I agree! The X is the best phone I've ever owned as well and well worth the price of admission.
Last edited by a moderator: Mar 5, 2018
Reactions: jbizzybeetle, mofly_9, Jetcat3 and 5 others
R

Subjective. I think its a great device but the 8+ is more polished and refined, IMO.
Reactions: turbineseaplane, 204353, Thor_1 and 1 other person

I agree, it’s the best phone made.
However, ymmv.

I love my X. I still have my 6S for backup and it seems dated when I mess around on it now. It would be hard to go back.
Reactions: eltoslightfoot, martyjmclean, keysofanxiety and 1 other person
J

Personally, I prefer the 8 Plus for the wider display, better battery, and yes, the home button and TouchID.
But yeah, the X is really good too.
Reactions: shahzadghani7, YaBoiD, ForumChick and 3 others

I love my iPhone 6s Plus because of one reason: headphone jack.
iPhone X is a great device but the notch is ugly. It also obstructs the view. Accepting something does not mean it is good.
Face ID is still not good enough, even though I can already see its superiority over Touch ID.
Glass back is prone to shatter or crack. But the feeling is unique and comfortable than aluminium.
I'd rather have an iPhone without the notch, with front-facing camera, with Face ID, and bezeless. Hide every sensor under the screen.
Reactions: Superhappytree
C

Agreed, he X is pretty much perfect. I don’t blame folks for balking at change-people always do-but Apple really nailed it with the X.

The negativity towards it generally comes from biased mindset, not experience. The notch “kills” the experience? Oh, please....
Reactions: eltoslightfoot, MEJHarrison, mofly_9 and 1 other person

Except the Pixel 2 has a bending problem.
W

Vermifuge said:
Except the Pixel 2 has a bending problem.
Click to expand...

To add a bit of humor: iPhone X users have a "bending " problem. They are willing to bend over and pay Apple any price Apple demands lol
Reactions: quietstormSD, Thor_1, Apple Fritter and 2 others

The notch is very distracting and ugly. It’s not as big as my 7+. It’s too skinny. The camera hump makes the phone wobble on a table and ruins everything. I don’t like Face ID because I have to turn my head a few degrees and actually look at the phone. Animojis are stupid.

Okay, I covered all the stupid complaints people that have never used the phone bring up. Back to the thread.
Reactions: YaBoiD, mofly_9, raqball and 3 others

BasicGreatGuy said:
I really enjoy using my iPhone X. Best iPhone I have ever had next to the iPhone 4s.
Click to expand...

I got a new 4S yesterday! It's my favorite iPhone design to date. I also use X as my daily phone.

My brand new 4S lying on my X, both my favorite design 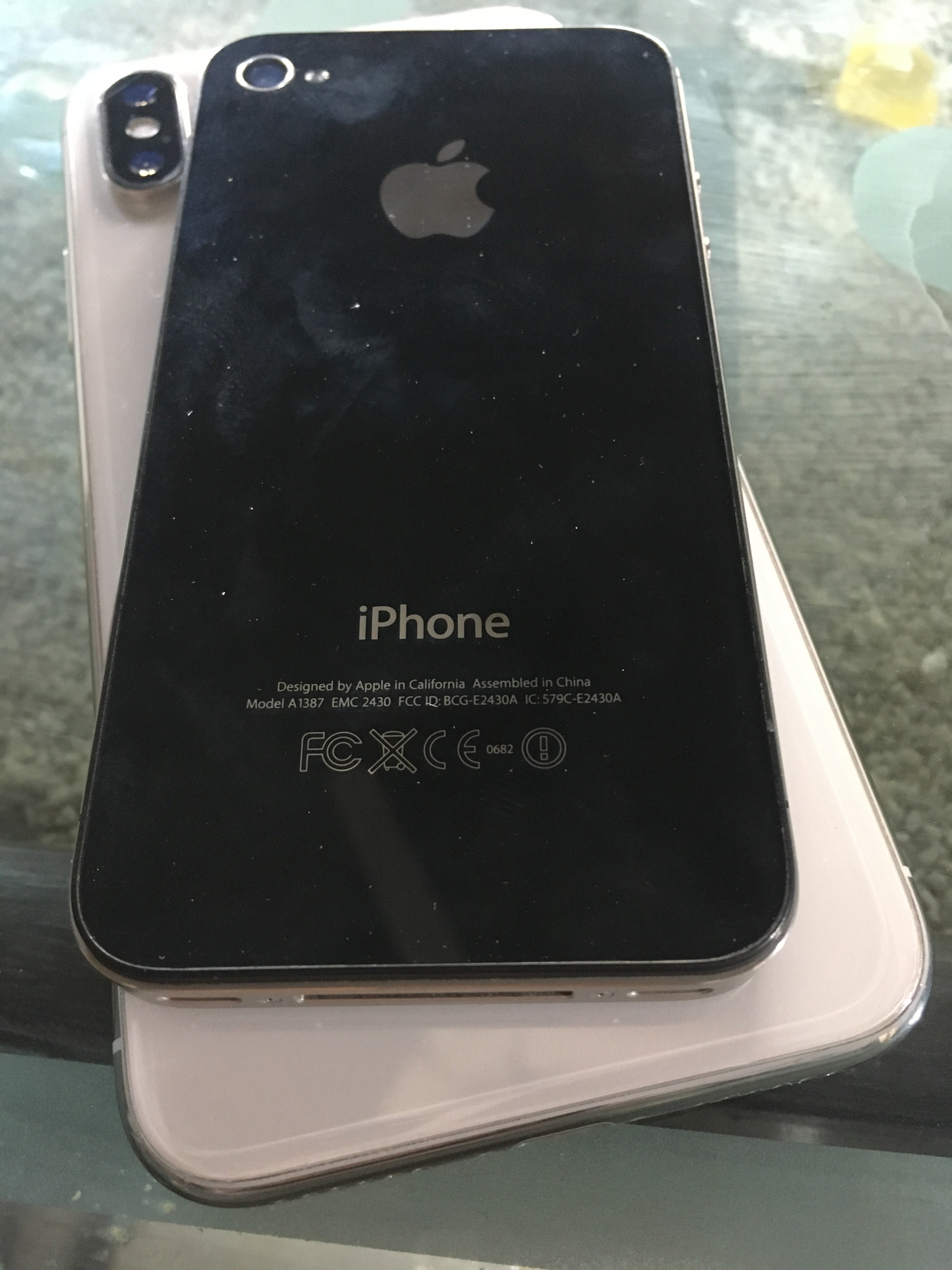 BasicGreatGuy said:
I really enjoy using my iPhone X. Best iPhone I have ever had next to the iPhone 4s.
Click to expand...

I honestly feel the iPhoneX is the best phone I've had since the original iPhone purchased back in 29 Jun 2007. Still have the first iPhone and the original receipt and box. Bought the bluetooth headset and charging stand as well.
Reactions: Bacong and keysofanxiety

Shirasaki said:
I love my iPhone 6s Plus because of one reason: headphone jack.
iPhone X is a great device but the notch is ugly. It also obstructs the view. Accepting something does not mean it is good.
Face ID is still not good enough, even though I can already see its superiority over Touch ID.
Glass back is prone to shatter or crack. But the feeling is unique and comfortable than aluminium.
I'd rather have an iPhone without the notch, with front-facing camera, with Face ID, and bezeless. Hide every sensor under the screen.
Click to expand...

Do you plan to upgrade in the future?? And how is your iPhone 6S Plus holding up??

It’s the best phone on the market but also the most painful iPhone yet.
R

The edge to edge screen is the only thing that really mattered. The aspect ratio is too tall, Face ID fails several times a day for me because I’m not looking at it in just the right way, and it’s real damn expensive to boot.

I love it for the screen, the battery life, and the wireless charging is pretty nice. It’s still a flawed phone in many ways.
Reactions: YaBoiD and Apple Fritter

Valid point. The iPhone X is the first iteration of a brand new series for the iPhone. Just like the iPhone 8, obviously every year it will improve and refine with the technology through a maturity process. I also think there are many who are holding out for 2018 and see what the iPhone X will be like for version two.
Last edited: Feb 26, 2018

I think it’s the best iPhone made so far.

But for me personally for it to be perfect it would have the power button or whatever they call it now on top again and not across from the volume buttons. As well as perhaps a small home bar like Samsung’s for fingerprints as I am constantly having to type in my password as Face ID doesn’t work as I use my phone on my lap or on a table a lot and Face ID rarely works then, also don’t like the double press to download apps but it comes down to the button being across from the volume buttons. And software, yawn.
Last edited: Feb 26, 2018