Is my iMac G4 running out of battery?

I've never had the battery run out of any computer so I don't exactly know how to diagnose it; I just know that the computer might not remember its time/date while starting up offline, but I haven't noticed any clock weirdness so far.

The iMac has been starting up without the startup chime for some time now. I assumed that it might've had something to do with the fact that I have a startup chime volume controller app installed and there's something wrong with it (an app that forces the chime volume to the same ideal level every time instead of being too loud). But when yesterday I meant to start using the computer as usual, not only did it not chime, but it only gave me a black screen. I did some reading, opened its bottom and pressed the reset button found there. Switched on, same thing. Then I tried switching it on and pressing cmd+opt+p+r to reset PRAM. A little clicking sound, no chime, but then the white apple screen lit up and the computer booted normally. I'm able to reproduce this, it does boot by resetting pram if it otherwise would just get stuck at black screen. For some reason, today it booted normally, with the startup chime and all.

Are these sure signs of the battery running out or what? I've put in a brand new SSD less than a year ago so I'm pretty sure that the hard disk is fine. Memory hasn't been renewed but I was planning on maxing out the RAM at some point. I don't experience any odd behavior or freezes once it gets to the OS.

Replace the battery.
You have to remove the bottom housing, not just the access cover.
If you have replaced the hard drive within the last year, you know how to do that...
Test the existing battery, if you like - it needs to be more than 3.5 volts.

Do a proper PMU reset after replacing the battery:
Don't plug the power cord in until you press the PMU reset button.
Do NOT press that button a second time, as you could crash the PMU chip.
If you crash the PMU, the battery life goes from around 5 years, to 2 days...
R

DeltaMac said:
You have to remove the bottom housing, not just the access cover.
Click to expand...

The access cover was enough for pressing that PMU button in the bottom. But yes I saw the battery when replacing the hard drive early this year. It's a pain to get to, which is exactly why I'd want to be sure before going through the process. And if it really is the battery, then I think I should get a hold of some new RAM so I can upgrade the memory and replace the battery on the same go, I absolutely don't want to have to open that machine twice, as that one time was already quite insane; I was stuck with the disc drive for a long time because it just seemed impossible to get out and every single guide I found just basically skipped over that hardest part of the whole thing.


DeltaMac said:
Don't plug the power cord in until you press the PMU reset button.
Do NOT press that button a second time, as you could crash the PMU chip.
If you crash the PMU, the battery life goes from around 5 years, to 2 days...
Click to expand...

Yeah, luckily I saw that in various posts, people warned against pressing the button more than once. Would be interesting to know what the button technically does!


DeltaMac said:
Test the existing battery, if you like - it needs to be more than 3.5 volts.
Click to expand...

Not sure how to test it. I do own a multimeter but I only know how to test for continuity, not sure what to do with a battery. The iFixit guide suggests a 3.6V battery.

Set the multimeter for Volts, or DC. There should be a range of voltages that you can set. Use the lowest range that would measure more than 3.6 volts. Some meters automatically set the range, leaving you to just set for Volts DC. The battery contacts are on each end of the battery. Touch one meter lead to each end. You should read out the voltage of the battery.
The later iMac G4 (known as USB 2.0 models, and can upgrade ram to 2 GB) have a battery test point on the bottom, without opening the case, just remove the metal cover. 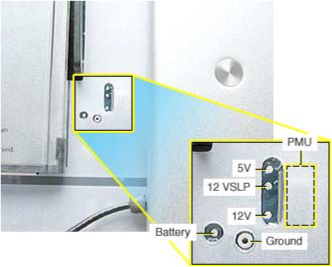 Black meter lead to Ground, and red lead to "Battery". Again, a good battery will be 3.5 Volts or higher.
(I suspect that your battery will be way low, and you might not measure anything at that point. And, that makes the decision easy, time to replace the battery!)
Reactions: philgxxd
You must log in or register to reply here.
Share:
Facebook Twitter Reddit Email Share Link
Register on MacRumors! This sidebar will go away, and you'll see fewer ads.
Sign Up
Top Bottom