Apple design chief Jonathan Ive has been awarded a gold badge by the BBC children's show Blue Peter, a show the British-born designer watched as a child and which encourages children to make things from ordinary household objects. Blue Peter is the world's longest-running children's television show, having been on the air for over 50 years. 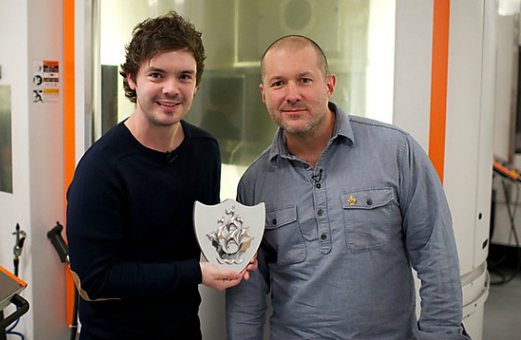 The show said that Ive was an "inspiration to children around the world". Blue Peter awards the badges to those it considers have encouraged and inspired children to develop their talents, with the gold badge awarded to Ive marking exceptional achievement.

The interview clip accompanying the BBC's article represents a rare public appearance by Ive, and it takes place in an Apple facility surrounded by equipment including a CNC machine for milling aluminum. Ive will also be featured in the half-hour Blue Peter episode airing tomorrow on CBBC.


​
Ive said that he had loved watching the show as a child, and described receiving the award as 'absolutely incredible'. He referenced the way the show encouraged children to make things from objects as ordinary as detergent bottles.

I loved the way there was just products that you thought were no longer useful, but reusing them. It was fantastic.
Click to expand...

Ive in turn presented the show with a Blue Peter badge milled from a single block of aluminum, the approach famously used for the MacBook Pro.

Jony smiling is so cool.

Jonathan Ivy - "I have selected this young man as the winner since he looks like a younger version of me, but with more hair"
S

Ahh, I remember watching Blue Peter avidly as a child - even visited the set and everything! If only I'd have been young enough at the time to enter such a competition

Just so you non-English know, getting this award is up there with getting an Oscar.

No wonder Macs don't cost a fiver each! Seriously impressive, though...
R

That is the question we await.

Yah? What were u inspired to do?

Here's one I made earlier.

That is the question we await.

Yah? What were u inspired to do?
Click to expand...

Well, not to advertise (since that's not allowed here), but I try to make my website look as clean and simple as possible, similar to how he has created sleek designs for Apple products.

I cannot imagine anything better than a giant, Unibody Blue Peter badge! And just to re-iterate the point made a few posts ago, in the UK, getting a Blue Peter badge really is quite an honour.
S

Jonny is the flippin man.

Just so you non-English know, getting this award is up there with getting an Oscar.
Click to expand...

Saw your avatar and thought - "Get down Shep!!!"

The kid used an iWatch on the secure lunch backpack, forcing Jony to pull a no comment and discuss every element of the project except that! Hard confirmation of iWatch!

Good for him, he deserves it!!

"...and in next week's show, we'll be showing you how you can make your very own iPhone from an empty Fairy Liquid bottle, two toilet roll centres, a tube of glue, and some sticky-back plastic...."
Y

Slix said:
Well, not to advertise (since that's not allowed here), but I try to make my website look as clean and simple as possible, similar to how he has created sleek designs for Apple products.
Click to expand...

Ohhhhh. You mean you were inspired by Google. OK, that makes sense.

a GOLD Blue Peter Badge ! Those are rarer than hen's teeth over here in the UK. To put this great honour into context, there are more people with knighthoods than Gold Blue Peter Badges

Silly boy, that's not what the iWatch is for. It's for everything else. You will still check your cell for the time and date. You will talk to it like it's your bestest friend.