Mass production will begin on the third-generation AirPods in the third quarter of 2021, according to an investors note from analyst Ming-Chi Kuo that was seen by MacRumors. 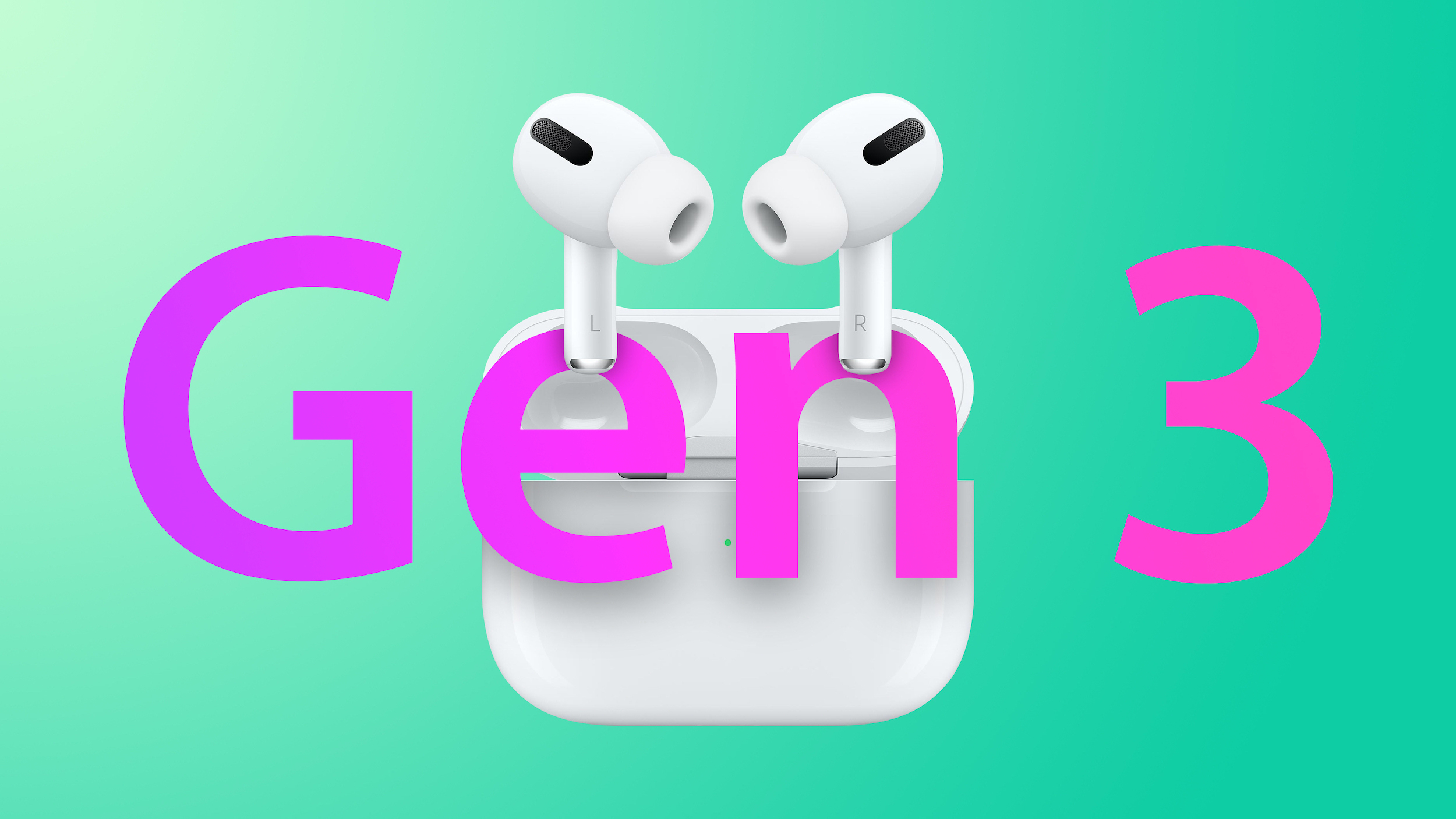 There have been several leaks depicting the redesigned third-generation AirPods, which normally suggests that a launch is close, and Kang, a well-respected leaker who often shares accurate information about Apple's plans, said recently that the AirPods 3 are "ready to ship."

Kuo says that the AirPods Max have offered "limited help" to AirPods shipments, with an annual shipment of about one million units.

It is unclear at this time if AirPods 2 will stop being produced when the AirPods 3 enter mass production. Kuo says that Apple has a dilemma -- if AirPods 2 stick around and are sold at a lower price, it could affect AirPods 3 demand, but if there's a no low-priced AirPods model, it could have a negative effect on Apple's sales.

Kuo attributes the decline in AirPods shipments to increased competition and a loss of market share. There are a number of lower-priced true wireless earbud options on the market for Apple to contend with.

The competitive advantage of Apple's products lies in providing integration of the "hardware, software, and service" ecosystem, not just hardware. The iPhone, for example, has seen its market share decline due to the rapid growth of the smartphone market, but it has been able to maintain shipment growth because of the strong ecosystem of the App Store and developers. We believe that Siri is the core of AirPods' software and service ecosystem, but since Siri's competitive advantage is not significant, the gap between AirPods' leading edge and its competitors' shrinks due to a lack of protection from the ecosystem as competitors gradually improve their user experience and launch lower-price strategies at the same time. We believe that HomePod and HomePod mini shipments were significantly lower than expected for the same reason.
Click to expand...

AirPods have quick pairing and fast switching capabilities that give them an edge over competitors, but Kuo says that these advantages are "gradually offset" by improved user experiences and lower prices offered by competitors.

Kuo says that if Apple wants to improve AirPods shipments in the future, hardware innovation like health management functionality is necessary to differentiate the earbuds from similar products offered by competitors.

For all the hype about these 3rd Gen AirPods from all of these leakers I expected these to come out at least in a 3 month window :/
Reactions: ThaRuler, ZZ9pluralZalpha, BvizioN and 6 others

Apple should stop stuffing so many releases together at the end of the year. iPad, iMac, MacBook Pro and the like could be released at any time. They mostly are not Christmas gifts but rather tools for professionals as well.
Reactions: h3ysw5nkan, Rafterman, DogGone and 19 others
G

il_teo77 said:
Apple should stop stuffing so many releases together at the end of the year. iPad, iMac, MacBook Pro and the like could be released at any time. They mostly are not Christmas gifts but rather tools for professionals as well.
Click to expand...

I’m sure Apple knows exactly when the best time to release products is. They are experts.
Reactions: Mac... nificent, h3ysw5nkan, twocents and 9 others

Who else think they are gonna come with health features, such as 'in ear body temperature meter' ? Basically the AirPods could tell you about a fever before you'd feel symptoms.
Reactions: DanTSX, Mac... nificent, h3ysw5nkan and 5 others
B

thomas040 said:
Who else think they are gonna come with health features, such as 'in ear body temperature meter' ? Basically the AirPods could tell you about a fever before you'd feel symptoms.
Click to expand...

Probably reserved for a future iteration of the airpods pro. Doubt they would introduce features like that in the regular airpods, but I assume something like that is definitely going to happen within the next few years.
Reactions: Sandstorm, Lemon Mac, performa_6400 and 2 others

My greatest respect to the wild successes of AirPods since their launch and they are miles ahead of any other truly wireless headphones, but there's no denying that over the past couple of years the competition has greatly improved and the gap is starting to shrink.
Reactions: h3ysw5nkan, Sandstorm, AmazeSE and 1 other person

I think it introduced a lot of people to wireless earphones that “didn’t suck” who otherwise wouldn’t have bought wireless headphones. Once you own a pair, other than them being lost/stolen, or the battery finally giving out there really isn’t any need to upgrade like there is with a phone or computer.
Reactions: h3ysw5nkan, valleian, pencilscribbler and 1 other person

I'm more interested about AirPods Pro next gen, what they will bring...
Reactions: DanTSX, h3ysw5nkan, deryk and 2 others

Kang vs Kuo. Who will be right?
Reactions: Sandstorm, Jony Ive and Co. and MrFootery

SWAON said:
I'm more interested about AirPods Pro next gen, what they will bring...
Click to expand...

Hopefully a better fit with "fins", I believe both the AP3 and APP2 can incorporate this into its design and rechargeable case housing.
Reactions: SWAON

They are convenient but too much of a electronic waste kind of product. I learned my lesson and will make sure that if I ever get another generation of AirPods, to put AppleCare+ on them. My first gen last about 30 minutes and the left one already died twice. My AirPod Pro also have been replaced once (thankfully I was still under warranty)
Reactions: h3ysw5nkan, ApplesAreSweet&Sour, urbanslaughter1997 and 5 others
C

GizmoDVD said:
I’m sure Apple knows exactly when the best time to release products is. They are experts.
Click to expand...

Indeed. I wonder though how trapped (if at all) they feel by the YoY expectation of growth during that quarter. I'd be surprised if it wasn't at least in small part a consideration.
Reactions: MrFootery

GizmoDVD said:
I’m sure Apple knows exactly when the best time to release products is. They are experts.
Click to expand...

How are HomePod sales going?
Reactions: h3ysw5nkan, trsblader, Sandstorm and 4 others
4

If they continue to use the gel tip design (Which I expect they will for ANC), then it’s a no-go for me. The in-ear design actually provided more of a discomfort for me after about 30 minutes of use. What I prefer about the regular AirPods, is they actually rest in the outermost portion of your ear. But nonetheless, a great device that has loads of potential for future upgrades.
Reactions: DotCom2, BulkSlash and kltmom

il_teo77 said:
Apple should stop stuffing so many releases together at the end of the year. iPad, iMac, MacBook Pro and the like could be released at any time. They mostly are not Christmas gifts but rather tools for professionals as well.
Click to expand...

Perhaps manufacturing slowdowns during the pandemic has caused this grouping of many product releases. You also have Apple likely wanting to discuss these product revisions in their WWDC 2021.

Time to sop listerning to jon and Iupdate
S

kerr said:
How are HomePod sales going?
Click to expand...

It wasn’t a question of time for the HomePod.
Reactions: Seanm87

I find it odd that they won’t be released until the third quarter...

I feel like they’ll come out this month the way the leaks are happening.
Reactions: turbineseaplane, AmazeSE, BulkSlash and 1 other person

AmazeSE said:
Kang vs Kuo. Who will be right?
Click to expand...

My money is on Kang.
Reactions: AmazeSE and calstanford
A

? is it just me or there’s been so much hype about all things Apple that...I...just...don’t really care...anymore (except M1X MBP — hurry up!)
Reactions: Sandstorm, Bea220, calstanford and 1 other person

kerr said:
How are HomePod sales going?
Click to expand...