Password management app LastPass will officially drop support and updates for its native Mac app from February 29. LastPass users are being advised to switch over to the new web-based version of the app that will replace it. 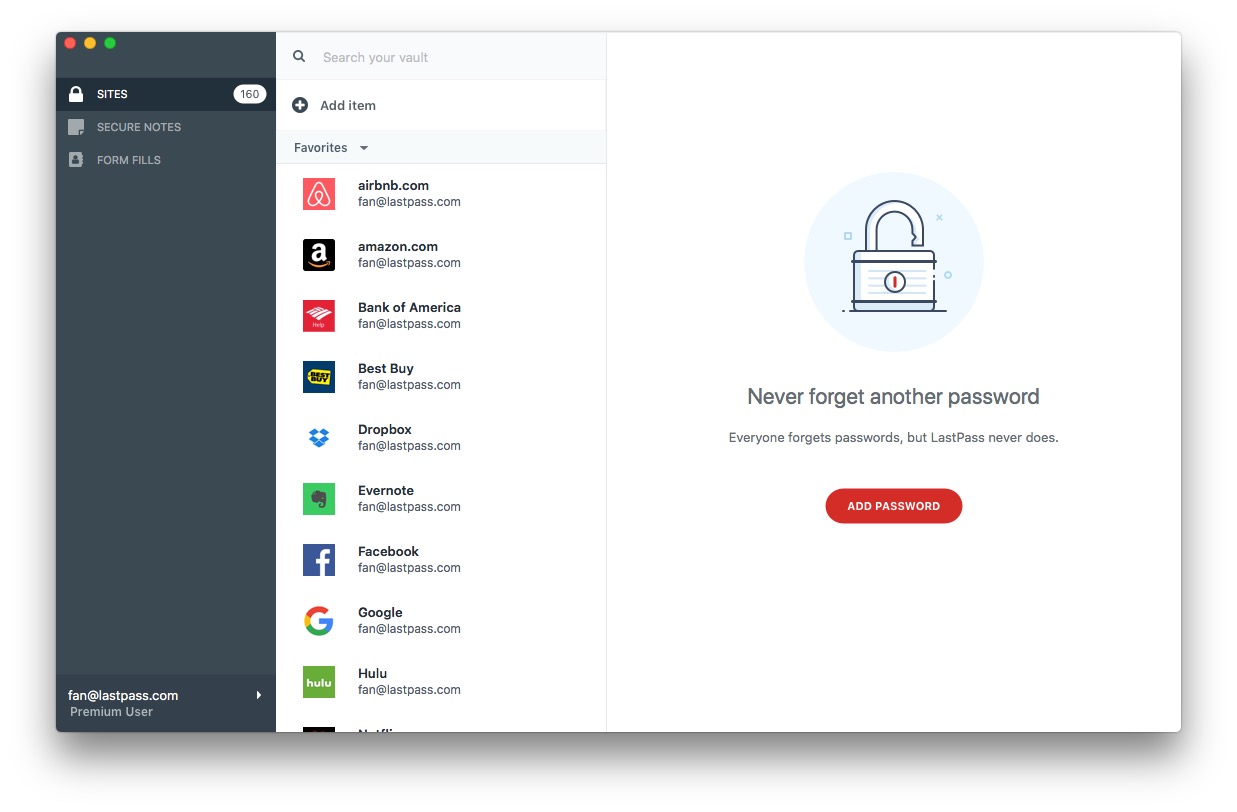 The old LastPass app for macOS​
The announcement was made in an email to users, explaining that the change was being made to "provide the best experience to our customers."

Changes in Safari 12 designed to get developers to offer browser extensions through Mac App Store apps instead of the soon-to-be-defunct Safari Extension Gallery were also cited as an influencing factor.

As noted by The Verge, other apps like 1Password were updated to implement the new system within their native apps, but LastPass has decided to remove support for its native app entirely.

The replacement web-based app supporting the new extension system has been built with technologies developed in the company's LastPass mobile apps, which should make it easier to maintain the apps across the different platforms.

According to The Verge, the negative outcome of the switch is that the new app lacks some of the functionality of the native Mac app, like system-wide hotkeys. However, LastPass told MacRumors that users can expect the same experience, with access to features such as the Sharing Center, Security Challenge, Emergency Access, Account Settings, additional Hot Keys, and more.

LastPass has gone to **** the last few versions, but this is disappointing. 1Pass is the best manager anyway.
Reactions: krischik, philosoraptor1, snek and 7 others

"provide the best experience to our customers."

Drops support for a native app in favor of a web based.

I had such a bad experience with the web extension on any web browser, good thing I switched for a better one. This screams "Because we are lazy, and it's less expensive in development"
Reactions: krischik, H818H, MadeTheSwitch and 6 others

Anyone who thinks a web app is a better solution than a native desktop app isn't very familiar with either.
Reactions: krischik, H818H, MadeTheSwitch and 16 others
T

Store passwords in the cloud?!
what could possibly go wrong??

Used LastPass for years before switching over to Bitwarden, which is open source and free. Much happier.
Reactions: QuarterSwede, rezzo, Apple_Robert and 2 others

+1 for Bitwarden.
Reactions: QuarterSwede and rezzo

firewire9000 said:
"provide the best experience to our customers."

Drops support for a native app in favor of a web-based.
Sure, bro.
Click to expand...

BTW: I think Apple should be more strict about the guidelines of macOS because the "non-native" madness spreading out and the overall experience suffers!

Just got 1Password. I am glad.
Reactions: philosoraptor1, ErikGrim, JetLaw and 6 others

That's not a good news. Not only is the native app more aesthetic (the web-one is ugly), but it has a MAJOR feature lacking in others: local storage of passwords, which enables the possibility of accessing one's passwords offline.

At least we won't have the Mac Appstore version + the Safari extension version standing side by side, which made no sense. But I blame Apple for that one.

Well, as long as the other services of LastPass remains, I guess I'm going to remain a customer. Plus it sucks to change one's password manager.

Got money on the table that 1Password will soon follow. That way they can really get ride of licenses.

ER, I'm not sure I follow your logic here.

Meanwhile, all this makes me happy that we're completing our family migration to 1Password this weekend, an app I've been dogfooding myself for a month.

Does anyone not know that macs have a built in password manager...
Reactions: ErikGrim and Morod

Rychiar said:
Does anyone not know that macs have a built in password manager...
Click to expand...

What if I use windows and Mac though?
And want to store random secure notes, serial keys, non standard passwords for physical things?? It’s not feature rich enough to replace a true password manager. I’m sticking with 1Password..
Reactions: locovaca, Lazy, beanbaguk and 1 other person

My next challenge is to eliminate my keychain reliance and ensure everything is built into 1password so there is no overlap (which frequently happens), and I have full cross-platform compatibility.

1password is genuinely solid software and while many gawp at the price, I personally have no issue paying for quality software so it can be supported and managed accordingly.
Reactions: ignatius345, Lazy, B60boy and 2 others

So glad I switched from lastpass to 1Password.
Such a smoother system. Saves me SO much time.
[automerge]1580391916[/automerge]

Rychiar said:
Does anyone not know that macs have a built in password manager...
Click to expand...

Yes but until the recent update it was a security hole. However, I use both.

the management of the passwords is so ouch cleaner in 1Password and1Password fully supports Apple Touch ID while apples own doesn’t support Touch ID fully.

This right here. I love using Keychain but it is not feature rich enough and it needs a user friendly app for managing passwords along with secure notes and other items. Until then I will continue using 1Password.
Reactions: Lazy, TraderScooter and B60boy

glowplug said:
Store passwords in the cloud?!
what could possibly go wrong??

Very happy with mSecure local storage, thanks.
Click to expand...

This right here. Glad I stuck with 1Password. They push their cloud option but give you the option to just stick with local storage.
Reactions: snek

I was an early adopter of lastpass as I needed something cross platform and 1password was much more mac focused in the beginning.
Ultimately, the user interface of lastpass just was not tolerable for me and i'm so glad I switched to 1password. It costs a little more, but it just works better, and feels like a native ios/mac app. Lastpass really just feels like a webapp running in an app window anyway. Good riddance.
Reactions: B60boy

This was the final straw for me. LastPass has been steadily declining for months now. I’ve seen an increase in the number of bugs, for example just copying a password would result in a freeze/stutter. Now, they remove native Mac support entirely and claim it improves customer experience. LogMeIn is gutting LastPass in the name of profitability.

I love LastPass for Business. 1Password doesn't come close. And it's easy to deploy in a G Suite environment.