the topic of Macs and UPS systems have been discussed many times in different threads here. However, I haven't been able to find a current thread containing my exact issues and concerns so thought I would start a new thread.

I have been having very frustrating issues over the last few months of random flickering in my apartment, and APC UPS systems always switching to battery and back ( randomly even on low sensitivity settings.)

I've done extensive testing and process of elimination, as much as possible as I don't own, but rather rent.

I've had maintenance check the breaker, check outlets, I've gone through process of elimination of unplugging all devices in the general area, between living room, and kitchen (bedroom, bathroom not effected)

The UPS model being used at this point was the APC 1500VA BN1500-M2. I would exchange for a new unit because I kept thinking I was getting bad units. It would be a day or 2, or even a matter of hours, then the random clicking and cycling would start again (again, sensitivity setting didn't matter.). The units are a simulated sine wave vs a pure sine wave UPS. The cycling was bad enough to cause power fluctuations in the apartment from living room to kitchen area (mainly flickering lights, and when I had it the oscillating fan would slow down too as under too much load.

I finally discovered the problem happened when either the iMac was plugged into the UPS (either side, or connected on the same circuit as the UPS). I returned the last APC unit yesterday to Office Depot, went to Best Buy, and got the CyberPower 1350PFCLCD pure sine wave unit, adjusted my sensitivity to low, and so far everything is quiet. My desk lamp may still flicker a tiny bit once and a while while the Mac is running, but so far none of the bad drama has taken place. I was concerned the iMac might have a power supply issue, but it runs fine and doesn't exhibit any strange behavior unless combined with one of those APC units.

It's also never been subjected to any surges or dangerous electrical conditions. If there were a bad storm coming, I would always shut down and unplug from the wall for extra measures of protection.

I did read various places, that while Macs will work with a simulated Sine wave UPS, they prefer pure sine wave.

By the way, my apartment complex was built in the late 60's so it's older, however outlet testers and ground testers have always shown proper wiring, and no faults. The power has always been reliable, other then in bad storms. It's only shown strangeness after combining the Mac and a UPS. If it's just the Mac on a surge protector, nothing was abnormal, if it was just the UPS without the Mac plugged in, also OK. So there has to be something going on between the Mac and a non sine wave UPS, as I mentioned, the problem seems to have gone away after getting rid of the APC and going with CyberPower.

I know this was a long post, but wanted to provide as much information in detail as possible.

I would be curious of feedback, because none of the other threads I've looked at discuss my exact issues.
M

If your UPS does not allow enough juice for the Mac to operate, these problems are to be expected. An old battery can cause this. So can a unit that is undersized. You'll need to talk to the maker to see which it is.
Comment

That's a fairly heavy duty UPS which should supply enough power for your iMac. But as the previous reply pointed out, the battery could be defective. You should have it checked out.
Comment
M

chscag said:
That's a fairly heavy duty UPS which should supply enough power for your iMac. But as the previous reply pointed out, the battery could be defective. You should have it checked out.
Click to expand...

I returned the APC for the last time, and got a CyberPower instead. Things have been much more reliable.
In my original post, I thought I had mentioned that I tried about 3 or 4 APC units, which all resulted in the same behavior shortly after being put into service. The interesting thing is, All these units have AVR technology, but only the CyberPower seems to work correctly here. What I mean is: The APC units would thrash back and forth to battery no matter sensitivity settings, and It didn't matter if the iMac was plugged into the unit, or simply on the same circuit. The APC, would still thrash from battery to AC Utility power. Granted, it was worse with the iMac connected to the UPS.

With the Cyberpower, with sensitivity set to low, which is fine for this environment, if it detects line changes, it will click but not switch to battery unless the AVR function can't correct the problem first.

Unlike APC, CyberPower still provides software for the Mac beyond the basic built in support. Here is a screenshot of PowerPanel showing the average load of a 27" 5k iMac late 2015 on the Cyberpower unit.

The APC was never overloaded, battery was a possibility. I've just never had good success with APC units. So it was time to try something else, or just stick to a good surge protector. So far, so good.

FYI, the blackout status was from when I tested the unit, no actual power disruption happened. Power is usually pretty reliable here other then summer when there are storms. 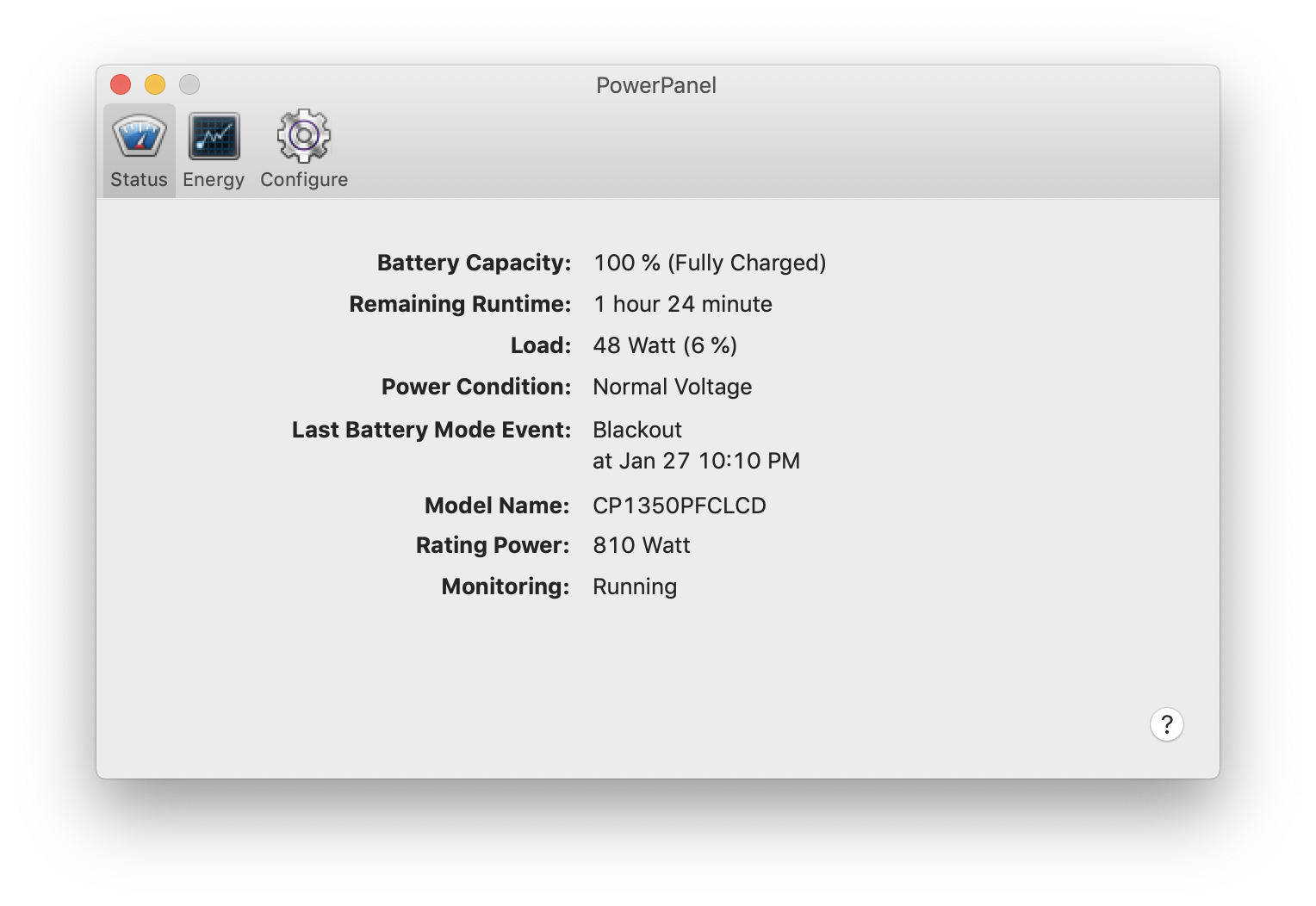 Hey guys, wanted to give an update. The issue has been resolved. It turns out, as suspected, the breaker had gone bad to the apartment. Due to long term damage from an incident several years back the main wiring had been almost completely burned through. So the breakers were heating and the wires were getting worse. Since the apartment maintenance wasn't able to deal with the power company's meter as expected, the complex hired a couple electricians to clean up the breaker, pull the meter, and install a new main. So much cleaner now. No more flickering or malfunctioning UPS systems, or anything else. It's been a few days now. Just bought and installed a basic 450VA 255 Watt APC Back UPS for the modem and router, and things fired up quickly and quietly. NO flickering, or anything.

The iMac is on a pure sine wave unit in the bedroom now, and that's also stable. Because of the new setup, it's physically impossible to consolidate everything to one UPS now. Anyway, because of the light load of modem, and router, the 450 VA should still give plenty of breathing room.

Good show. The breaker going bad was a disaster in waiting and could have resulted in a fire. Looks like you're on safe ground now.
Comment
M

chscag said:
Good show. The breaker going bad was a disaster in waiting and could have resulted in a fire. Looks like you're on safe ground now.
Click to expand...

God only knows how long the damage from the transformer malfunction from several years ago had been festering, and no one knew it. That's probably the main event that triggered this, the transformer out on the pole pumped 240 volts into the apartments. and it probably burned things up good, but since nothing but the fried electronics at the time showed up, I or no one else thought to have the wiring checked. At least the power company paid for the damaged goods at the time, as this was their fault and they took responsibility. Now the only thing now is to decide if I want to keep the 450VA, or go to a 650VA, it's only for the modem / router etc so anything larger would be way overkill. Any thoughts? Devices being backed up include:

As mentioned the NightHawk has replaced the Airport, the AirPort is just there for testing now.

I always lean toward the better especially if it's not going to break my wallet. A 650VA unit will give you room to grow and also provide a longer "on battery" time than the 450VA unit.
Comment
M

chscag said:
I always lean toward the better especially if it's not going to break my wallet. A 650VA unit will give you room to grow and also provide a longer "on battery" time than the 450VA unit.
Click to expand...

I have 30 days to evaluate, and I looked up estimated wattage for each device I plan to use. While the 650 will add time, the load amount will be small, and the 450 VA won't suffer much time loss. I'll see how it works in the time I have before I have to return it.
Comment
You must log in or register to reply here.
Share:
Facebook Twitter Reddit Email Share Link
Register on MacRumors! This sidebar will go away, and you'll see fewer ads.
Sign Up
Top Bottom