iOS developers have already gotten their hands on ARKit, Apple's latest platform which enables developers to quickly and easily build augmented reality experiences into their apps. ARKit blog Made With ARKit has been sharing even more examples of the augmented reality apps that developers are toying around with, coming a few months ahead of when the first apps will launch to the public alongside iOS 11 this fall.

In two new videos shared on Twitter, developers have created useful measuring apps with ARKit, using the camera, processors, and motion sensors in an iPhone or iPad to calculate the size of various objects. In the first video, the app requires users to tap two locations and then shows the total distance between the spots as a floating number in the air.


In the second video (seen above), users choose a starting point for the virtual measuring tape, and then pan to where they want the end point to be located. The video compares the virtual AR measuring experience to a real measuring tape, and then tries it out on a picture frame and armoire. The app in the second video was built by Laan Labs, and they have a few other ARKit videos on their twitter, including one where they make a 3D drawing.

Gaming apps have already begun to take shape as well, with developer Matthew Hallberg building a Minecraft AR app with ARKit and Unity. The app lets players place Minecraft blocks around their real-world environment, and then destroy what they've built with Minecraft's traditional crafting and destruction mechanics.


One well-known partner for ARKit is furniture company IKEA, which plans to launch a new iPhone and iPad app that will let customers view objects in their own home through ARKit before they make a purchase. For more on ARKit, check out a hands-on video of the platform's demo that Apple created for developers and used to showcase the technology this year at WWDC.

The measuring tape might sound basic but when I'm looking back at how often I could've used that app...
Reactions: Uunnkknnoowwnn, Keane16, 4RUNRCLB and 20 others

This is actually a lot cooler than I originally thought it would be.
Reactions: 4RUNRCLB, pratikindia, T-Will and 7 others
M

This is very interesting, if Apple are allowing developers to use AR kit now and build apps I wonder if they will be giving the iPhone 8 AR features in September.
Reactions: chrisbru

Floating numbers in the air. That's a real trick, if you can do it.
Reactions: Avieshek

The tape measure (if it's accurate) is a good sign of the direction of AR apps.

My 6-yr old is going to be blown away at the Minecraft AR demo. Should be fun to see what he does with that functionality.
Reactions: ILikeAllOS and DotCom2

Yeah the tape measurer is useful to me. When this takes off I bet some companies will come up with some pretty memeable ideas that they think are cool...but general society thinks are dumb.
T

Ok I saw the Minecraft video and thought lets see what people say in the comments. Then see people talk about the measering tape vid and was like.... ok... lets check that out. But DAMN! Thats actually kinda nifty.
Reactions: Marvive
L

Dave245 said:
This is very interesting, if Apple are allowing developers to use AR kit now and build apps I wonder if they will be giving the iPhone 8 AR features in September.
Click to expand...

It's bigger than that. It looks like they're giving every phone that runs iOS 11 AR features.
Reactions: Dave245

lunarworks said:
It's bigger than that. It looks like they're giving every phone that runs iOS 11 AR features.
Click to expand...

Not even that, more like everything that can run iOS 11. They specifically showed off ARKit on iPad at WWDC.

EDIT: It's for iPhone and iPad. Every iPhone and iPad (no iPod) that can run iOS 11 and has at least an A9 CPU will have AR support. This is why Apple said they now have the world's largest AR platform. 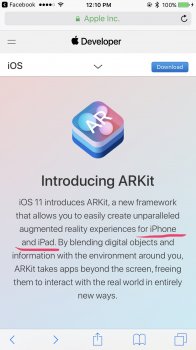 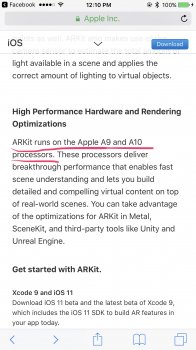 the floor IS lava
Reactions: dobsiin, ILikeAllOS, EndersShadow and 1 other person
J

Tape measure is great. I wonder if you need to first focus on a penny or some other object to set a reference measure. Very cool.

Wowereit said:
The measuring tape might sound basic but when I'm looking back at how often I could've used that app...
Click to expand...

This puts a lot of pressure on the individual App developers to ensure the reliability and reasonable accuracy of Apps like the one showcased above since we are eventually going to rely on these measurements once the novelty wears off and we get used to the convenience and utility of it.
Last edited: Jun 26, 2017
Reactions: gnipgnop

This is insanely awesome. Wow.

Watching how closely the AR generated tape matched the real one kinda gave me a shiver not gonna lie. That was AMAZING
Reactions: jeremiah256 and agsystems

lunarworks said:
It's bigger than that. It looks like they're giving every phone that runs iOS 11 AR features.
Click to expand...

That would be great, I just wonder if it will be a feature of iPhone 8 that they show off on stage. It could be that they are dipping their toes in the AR area before releasing the rumoured AR glasses in a few years.
Reactions: jgelin
S

Not accurate enough for fine detail work, but this is an incredible demonstration of what is possible. I would use something like this every day, even at its current accuracy.

Really cool. This could be the start of something huge.
Reactions: ILikeAllOS, Glassed Silver, agsystems and 1 other person