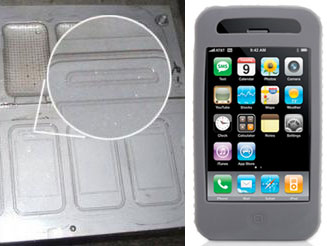 In the months leading up to the iPhone 3G launch, there were a few early 3rd party case leaks that claimed to depict the upcoming iPhone 3G design. First reports of the case specs came from iLounge. They accurately described tapered edge designs, a glossy plastic back, with white and black colors. One aspect of the original story that we haven't been able to confirm is the reported addition of a 3rd sensor, which drove speculation about the possibility of video conferencing. No additional sensor has been described in the tech specs for the new iPhone. However, iPhone 3G case designs do appear to have adjusted with a larger openings at the earpiece.

This brings us back to two early reports of 3G iPhone case designs by XSKN and Griffin Technology. Both sets of images appear to have been accurate.

Images of XSKN's EXO Mask iPhone 3G were posted in May generating a lengthy debate. Their product remains available with the design consistent with the actual iPhone 3G release. In retrospect, Griffin's leaked case molds were also accurate with the final FlexGrip for iPhone 3G now announced.

In the end, it appears Apple does seed accessory manufacturers with dimensions of upcoming products to ensure a supply of cases for their new product.

i wonder when incase will update their cases for the iphone, theyve always made my favorite cases

I'm not clear on why these images in particular raised so much doubt. A company such as Apple relies on a global supply chain, and its ability to maintain secrecy around upcoming products only is as strong as the weakest link.

Personally, I'm pleased to see Apple releasing these specs so that the availability of cases coincides with the new iPhone. I don't recall that being the case with the launch of the iPod Classic.

Cases are a moot point IMO.

Please let it be a CAMERA!!!
L


my thoughts exactly - let the 3g iphone with front facing camera rumours begin.
Maybe there is a higher spec model which is 'prepared' but not being released for a few more months - Apple have got to do a v1 (price drop) again and annoy the early adopters
M

If not a cam - WHY did they move the sensors? Why take the time/money to change the design there. They are clearly moved and no longer butt-up next to the bezel above the speaker. I recall zero issues with ambient light or proximity sensors.

That's what I want to know.
R

meagain said:
If not a cam - WHY did they move the sensors? Why take the time/money to change the design there. They are clearly moved and no longer butt-up next to the bezel above the speaker. I recall zero issues with ambient light or proximity sensors.

That's what I want to know.
Click to expand...

I saw conjecture elsewhere that that they have split the proximity sensor into two separate sensors. I have had problems with the proximity sensor on the first gen iPhone, with phone sometimes failing to recognising it's near my ear and allowing my cheek to hang-up a call.

But maybe I just have freakish ears.
T

I bet I can name TWO companies that will NOT BE GETTING future look sees on upcoming products.....

Maybe they wanted to put in better speakers? Or even better would be sticking all the antennas on the top instead of bottom.

So did the first version of the iPhone have ambient light sensors? If not couldn't it just be room for the ambient light sensor? There is no way he didn't announce a camera on the front of the camera. From a business standpoint it just wouldn't make any sense. Anyways, my DSL connection (the best the AT&T has to offer) can't even support iChat I doubt a shabby 3G connection will be able to. At least not At&T's.
C

I am sure the GPS chip can see through the rubber of a case lol.

Most GPS receivers will work through plastic, rubber, fiberglass, and glass.
M

I like the idea that a another model later in the year will be released with a front facing camera, along with a much better rear camera, we hope. Come on

a 2 meg camera that is so poor, may be a third party will develop a plug in camera/video
F

People are still going to majorly drop their phones, and a little cushion for the push'n will definitely save a few asses, if you know what I mean.

When an iPhone falls with force on its corners, the screen tends to shatter. A case mostly protects against that. I've seen before and after big falls, both with and without a case, with cases always come out better.

I doubt they will have a front camera come june 11th, if it was going to be there they would have said it during the keynote.

Because it's that scratch-happy glossy plastic that was on the 5G iPod and 1G iPod nano. If hairline scratches don't bother you, then you don't need a case.

too bad there isn't video conferencing though
S

Cases are for wussies!
H

LeviG said:
my thoughts exactly - let the 3g iphone with front facing camera rumours begin.
Maybe there is a higher spec model which is 'prepared' but not being released for a few more months - Apple have got to do a v1 (price drop) again and annoy the early adopters
Click to expand...

or maybe they wanted to keep it a secret so that people get a nice surprise when they buy one on July 11th.
S

If Apple is planning an addition to the iPhone at some time in the near future, now is the time for the accessory manufacturers to include cutouts for that still-unannounced feature. All the easier to spring a surprise without causing havoc in the accessory stream.
L

I was pretty disappointed not to see the front-facing cam addition. I hope this indicates one available in this form factor at a later date.

But there will be a howl of unhappy users if one is available 3 or 6 months down then road. Early adopter penalty is one thing, but trickling features into a product JUST to milk every last cent out of folks is just BAD BUSINESS.

harryjarman said:
or maybe they wanted to keep it a secret so that people get a nice surprise when they buy one on July 11th.
Click to expand...

There's already been a few hands-on reviews and no one has pointed out a front-facing video camera. There's no conspiracy going on here. If there was a video camera, it would have been pointed out by now. If not by Apple, then by someone else.
L

but I would like a nice snap-in/out holster, but it looks like the design of the IPhone wont be conducive to that.