Leaker: HomePod 'Mini' Close to Launch, But No Second-Generation HomePod This Year

Apple is expected to unveil a smaller, lower-priced HomePod at its digital-only event next week, which has led to speculation about the possibility of a second-generation HomePod also arriving. This morning, however, serial Apple leaker l0vetodream poured cold water on that idea, claiming there will be no "HomePod2" launching beside the rumored "mini" model this year. 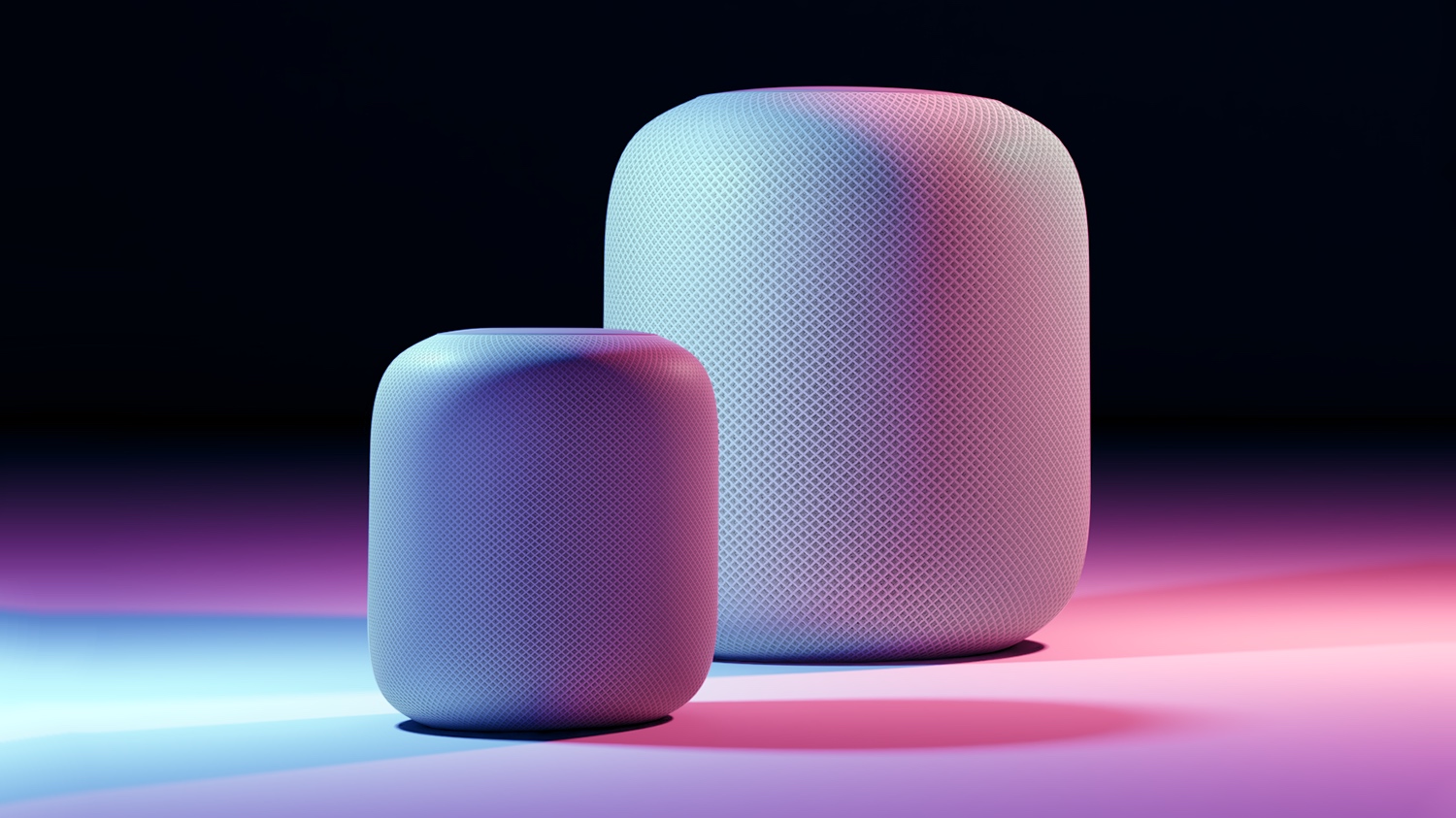 Earlier this year, Apple began allowing employees to purchase up to 10 HomePods at a 50 percent discount, up from the previous limit of two. Some observers had suggested that the larger purchase limit could be part of Apple's efforts to clear out inventory of the current HomePod ahead of a new model.

Apple may continue to sell the current HomePod alongside the smaller, more affordable version, but it may cut future supply orders for the premium model, which reportedly hasn't sold very well. Apple has never disclosed HomePod sales, instead grouping the speaker under its "Wearables, Home, and Accessories" category, but the price of the speaker is thought to have been its biggest obstacle.

Apple launched the HomePod in February 2018 with a $349 price tag, but then reduced its price to $299 in April 2019. The HomePod also has several low-priced competitors on the smart assistant front, including Amazon's fourth-generation Echo ($90) and the recently announced Google Nest ($90).


https://twitter.com/i/web/status/1313678039360831494
Apple has been steadily making the HomePod more useful by adding features such as Handoff support, multi-user voice detection, ambient sounds, and multi-room audio. Apple is also expected to add third-party music support to the HomePod in a future software update. The latter feature will presumably allow Spotify and other music services to be set as the default music service, letting users ask Siri to stream music by specifying "with Spotify" at the end of a request.

As for Apple's rumored smaller HomePod, Bloomberg's Mark Gurman has suggested the new speaker could include two tweeters, rather than the current model's seven, in order to drive down costs.

what would a new HomePod2 do? sound better? sounds like HomePod just needs software updates to make it better.
Reactions: KeithBN, sakurarain, SantaFeNM and 23 others

Can't wait for a mini, this will be great for rooms where I don't care about amazing sound.
Reactions: ani4ani, ErikGrim, Neodym and 10 others

marklemac said:
Can't wait for a mini, this will be great for rooms where I don't care about amazing sound.
Click to expand...

Agreed! We have a few in the house, but depending on price, a HomePod Mini would be a much better fit for some of the rooms and would also help with more Homekit & Siri options.

November 3d, Apple will announce mac event for the 10th of November
Reactions: sakurarain, waquzy, Spizike9 and 1 other person

Apple should bring HomePod more widely available. In Finland (for example) you can't buy it from Apple or from 3rd party retailers. Over seas you can get HomePod for 200$ in sale, in here you have to order it from Germany (that has imported it) and pay 350€. It's ridiculous.
Reactions: George Dawes, ISprainedMyUvula, decypher44 and 6 others

If it’s the same just smaller and less sound they better price it no higher than £70-90
Reactions: waquzy, mazz0, User 6502 and 1 other person
G

Yep, the best thing that can happen to the HomePod right now is availability in more countries.
Reactions: ISprainedMyUvula, nortofthe13th and edvj

Just lower the price of the regular one to about half.
Reactions: entropys, kolebee, TropN and 9 others

November 3d, Apple will announce mac event for the 10th of November
Click to expand...

Airtags may be announced next week as well
Reactions: Jovijoker
D

I will personally never buy one of these no matter what the price whilst it's not fully compatible with all major music streaming services like Spotify. I just refuse to be forced into using apple music. All my playlists and stuff is on spotify and I'm perfectly happy with it. I can either get a homepod and it would be very annoying to use spotify on it, or change to apple music which would also be more annoying.

Frankly even if spotify is included in a future update as mentioned in the article, I'm very skeptical about getting one, I mean what if there is a great app out there for smart speakers but then apple effectively bans the use of them except for their own? I just think it's a ****** practice by apple.... they can do it if they like, it's their product, but it'll never be for me after they've taken so many years to include spotify.
Reactions: yeye11, ani4ani, sakurarain and 10 others
J

Does anybody who owns a homepod know if they resolved the problem of the base staining certain kinds of wood treatment? I don't want white "coffee rings" all over my shelves...
R

Will it be available only in a handful of countries too?
M

farewelwilliams said:
what would a new HomePod2 do? sound better? sounds like HomePod just needs software updates to make it better.
Click to expand...

I'v always wondered why the Homepod still doesn't work in stereo system-wide with my Mac for example.

The main problem I have with a pair of HomePods is that I can't use them as my one and only speakers in the living room given how poorly they integrate with all the sources I'd like to use them with.
Reactions: minifridge1138, turbineseaplane, KrispE00 and 4 others

Even if the HomePod is my least favourite product category, the overmarketing and underdelivering of Apple's 2020 product announcement events is beyond disappointing.
Reactions: George Dawes and User 6502

Being allowed to buy 10 HomePods at 50% rebate means an employee can actually make a few hundred dollars extra money by buying $299 HomePods for $150 and selling them for $200. So it's a little bit of tax free income.
Reactions: Icaras, Rainshadow, mazz0 and 2 others

farewelwilliams said:
what would a new HomePod2 do? sound better? sounds like HomePod just needs software updates to make it better.
Click to expand...

I mostly agree. However unless the software updates allow for it to be used as a Bluetooth speaker, the appeal will be limited just to those who are happy inside Apple's walled garden. For it to truly succeed, I think it has to have a more universal appeal. I'd go as far as saying that if I were Apple, I'd develop an Android app just to activate and use HomePod as a speaker (and maybe build in an optional Apple Music subscription) .

FTAOD I'm happy to be in the walled garden and I have three HomePods, will likely buy one more and possibly as many as three mini HomePods depending on price.
Reactions: SantaFeNM, DoctorTech and mazz0

Didn't know about the ambient sounds. Now Apple TV needs to be updated to play the matching video on your TV.
Reactions: scooterv51, mazz0 and cecil444
D

Great news. It will piss off its customers by making obsolete the original HomePod. This is indication that there’s still lot of stock of it. Maybe the affordable? Mini drive some sales to the big one.

I'm tempted by a mini for the office, especially if I can work out a way for it to start playing BBC Radio 2 in the mornings at 09:00 and then automatically switch to either Planet Rock or Radio Caroline at 14:00 when that idiot Steve Wright comes on and back to 2 for Coxy at 17:00.
Reactions: justin.d, MostlyARMless, Breaking Good and 1 other person

I think the regular HomePod is a wonderful bargain even if it were priced at $500. For a small speaker the sound quality is unmatched at this price point. I think people who complain that it’s too expensive want APPLE to give them away. And I use any music service I want to play from using my iPhone, including Spotify. Rings on the wooden surface? Give me a break. People pay $200 for AirPods yet complain about $200-300 for these beauties.
Reactions: geenosr, ani4ani, George Dawes and 23 others

davie18 said:
I will personally never buy one of these no matter what the price whilst it's not fully compatible with all major music streaming services like Spotify. I just refuse to be forced into using apple music. All my playlists and stuff is on spotify and I'm perfectly happy with it. I can either get a homepod and it would be very annoying to use spotify on it, or change to apple music which would also be more annoying.
Click to expand...

It’s a really good Airplay speaker and you can pretty much play anything from your phone/iPad/Mac including Spotify, YouTube, twitch, soundcloud etc. I stream twitch all the time.

It really isn’t as big of deal as people make out.
Reactions: George Dawes, SantaFeNM, iGeneo and 6 others
M

cjbryce said:
unless the software updates allow for it to be used as a Bluetooth speaker, the appeal will be limited just to those who are happy inside Apple's walled garden. For it to truly succeed, I think it has to have a more universal appeal.
Click to expand...

Exactly. The fact that HomePod can't just be a Bluetooth speaker is hurting its appeal.

And do HomePods still need to be plugged into the wall?

There's a reason people still buy simple wireless Bluetooth speakers from JBL, UE, etc. You can easily take them in the backyard by the pool or in the garage. And anyone can easily connect to them at a party.

I understand that HomePods sound amazing for their size. And they have Siri and HomeKit in there too. They are true "smart" speakers.

But sometimes people just want sound that's not chained to the wall.
Reactions: Jury, George Dawes, SantaFeNM and 10 others
R

A mini would be great for my bedroom I already have a homepod in the kitchen and living room. I just can’t justify the cost of the full sized one for that area
Reactions: George Dawes, ErikGrim, currocj and 1 other person
You must log in or register to reply here.
Share:
Facebook Twitter Reddit Email Share Link
Register on MacRumors! This sidebar will go away, and you'll see fewer ads.
Sign Up
Top Bottom