Despite Apple's claims and charts, the new M1 Ultra chip is not able to outperform Nvidia's RTX 3090 in terms of raw GPU performance, according to benchmark testing performed by The Verge. 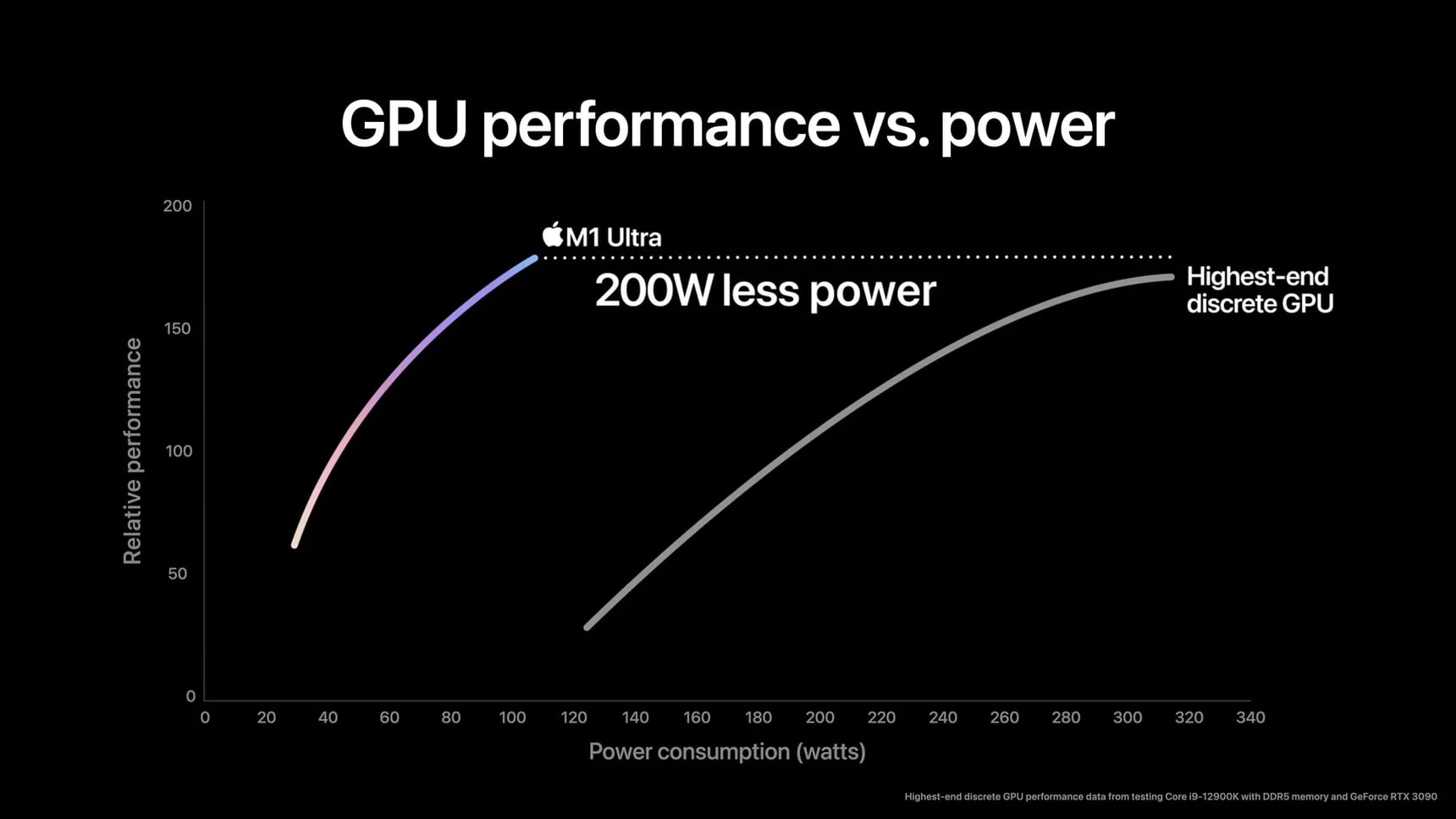 When the M1 Ultra was introduced, Apple shared a chart that had the new chip winning out over the "highest-end discrete GPU" in "relative performance," without details on what tests were run to achieve those results. Apple showed the M1 Ultra beating the RTX 3090 at a certain power level, but Apple isn't sharing the whole picture with its limited graphic.

The Verge decided to pit the M1 Ultra against the Nvidia RTX 3090 using Geekbench 5 graphics tests, and unsurprisingly, it cannot match Nvidia's chip when that chip is run at full power. The Mac Studio beat out the 16-core Mac Pro, but performance was about half that of the RTX 3090. 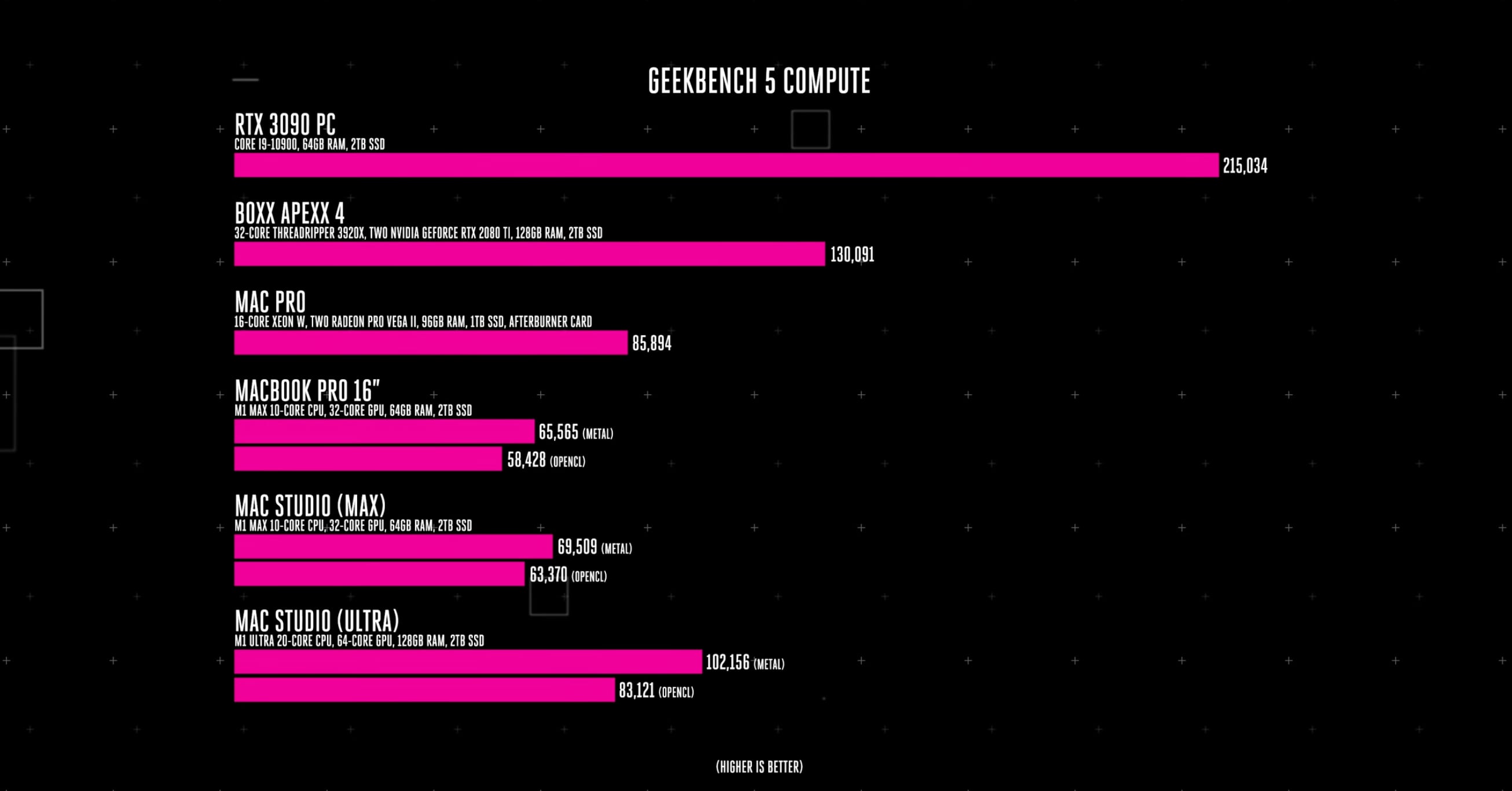 But it seems that Apple just simply isn't showing the full performance of the competitor it's chasing here.

It's sort of like arguing that because your electric car can use dramatically less fuel when driving at 80 miles per hour than a Lamborghini, it has a better engine -- without mentioning the fact that a Lambo can still go twice as fast.
Click to expand...

The M1 Ultra is otherwise impressive, and it is unclear why Apple focused on this particular benchmark as it is somewhat misleading to customers because it does not take into account the full range of Nvidia's chip.

Apple's M1 Ultra is essentially two M1 Max chips connected together, and as The Verge highlighted in its full Mac Studio review, Apple has managed to successfully get double the M1 Max performance out of the M1 Ultra, which is a notable feat that other chip makers cannot match.

No one saw this coming.
Reactions: zakarhino, dazz87, venom600 and 79 others

This is not very surprising. I'm sure there is a specific test where it is amazing, but this wasn't going to beat a multi thousand GPU at real speed tests.
Reactions: ommachi, Mal Blackadder, pbdnr and 31 others
F

As much as Apple wants to sell it there is a lot of scenarios when Ultra is not really 2x Max. Either way, its a great start. M2, M3..... will be insane
Reactions: singhs.apps, GeoStructural, DeepIn2U and 12 others

I suppose it is possible that in the chart displayed in this article, Apple is saying an M1 Ultra at ~100 watts matches a 3090 at ~300 watts. However, pushing the 3090 to it's near-500W maximum would allow it to pull significantly ahead as the benchmarks run by The Verge showed.
Reactions: zilin_huang, Apple Fan 2008, smittysauce and 59 others

Wow! This is crazy. What happened to industry-leading chip? 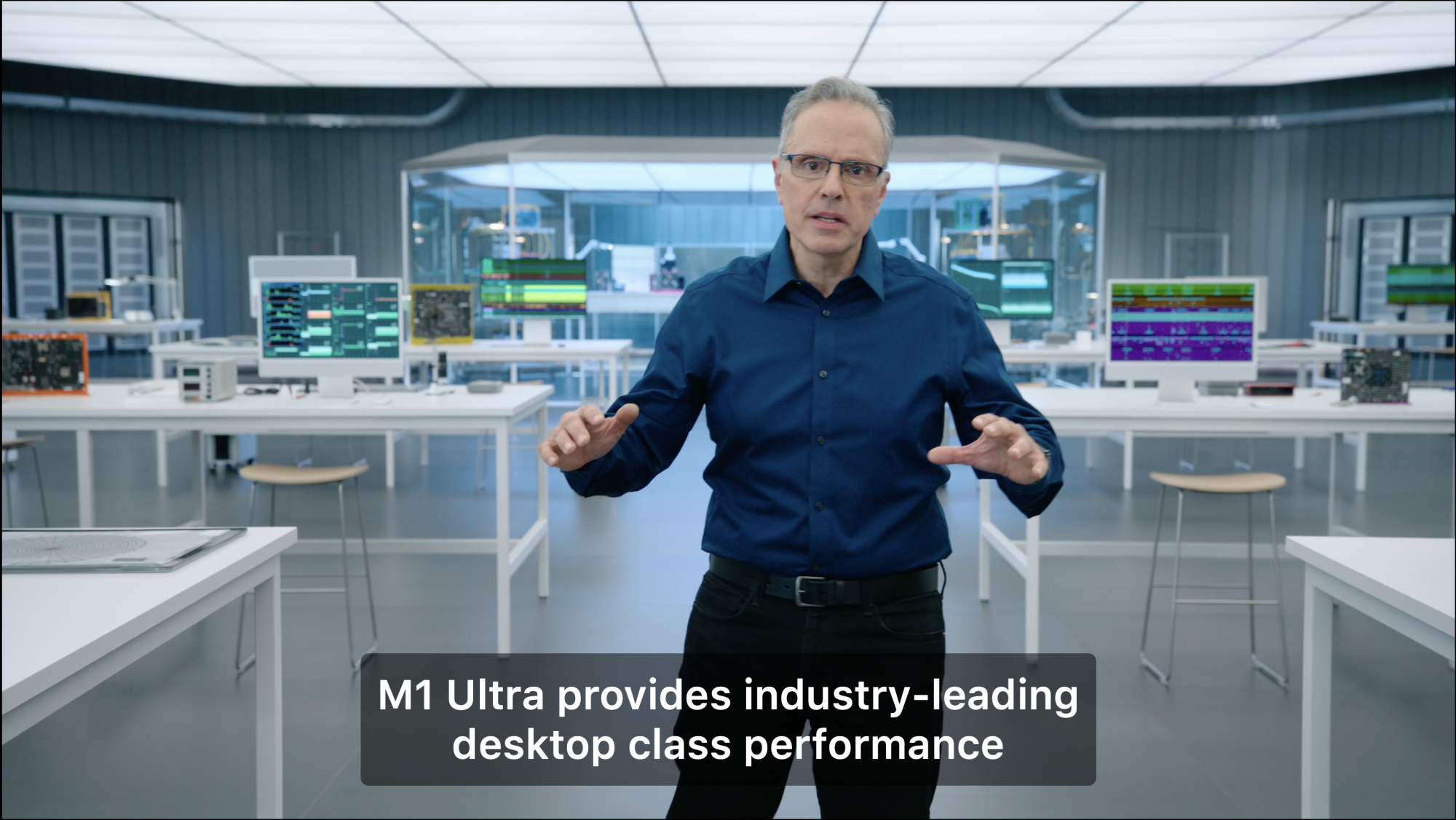 This is particularly relevant for desktop class computing. Most people are not concerned with power consumption for non-portable devices. As expected, it is going to take YEARS for Apple to truly compete. And even then, I won't be surprised if eventually Apple caves and has dedicated graphics options.
Reactions: can$rules, mihirdelirious, ommachi and 40 others

and as The Verge highlighted in its full Mac Studio review, Apple has managed to successfully get double the M1 Max performance out of the M1 Ultra, which is a notable feat that other chip makers cannot match.
Click to expand...

That's really not what they said, though. Synthetic benchmarks were able to reach a straight 2x in performance. But all other real-world uses cases and benchmarks saw below a 2x increase. This was borne out by benchmarking by other reviewers as well (such as Ars).
Reactions: ommachi, eltoslightfoot, Premium1 and 8 others
Z

I think this is why the Mac Pro will stay intel a lot longer than people realize. Apple cannot compete with 1.5 TB RAM options and dedicated graphics cards.
Reactions: StellarVixen, can$rules, mihirdelirious and 32 others
S

CWallace said:
I suppose it is possible that in the chart displayed in this article, Apple is saying an M1 Ultra at ~100 watts matches a 3090 at ~300 watts. However, pushing the 3090 to it's near-500W maximum would allow it to pull significantly ahead as the benchmarks run by The Verge showed.
Click to expand...

That's what I understood Apple to be saying. I'm more surprised that the M1 Ultra isn't closer to double the M1 Max in that chart.
Reactions: Mal Blackadder, Butler Trumpet, zapm and 13 others

It wouldn't be a Mac if its graphics were not half as fast as a PC. I love Macs BTW, just saying.
Reactions: -DMN-, th0masp, mihirdelirious and 34 others
M

In wow gaming it does beat it by 8-9 fos on tge exact settings
So, dont choose one benchmark
Reactions: FrozenShivers, SmakFairy, amartinez1660 and 5 others

RTX 3090 power is not needed to play phone games on a Mac.
Reactions: Orionfox, pianostar9, mihirdelirious and 24 others

The ‌M1‌ Ultra is otherwise impressive, and it is unclear why Apple focused on this particular benchmark as it is somewhat misleading to customers because it does not take into account the full range of Nvidia's chip.
Click to expand...

It’s only unclear if you think of Apple as some benevolent uncle.

If you think of them as a corporation looking to portray their product in the best light, it’s very clear.
Reactions: TheSapient, foliovision, ommachi and 22 others
T

Compute benchmarks should scale pretty linearly with the number of GPU cores, so it's concerning that the Ultra is getting way less than twice the score of the Max.
Reactions: Mal Blackadder, pbdnr, RalfTheDog and 8 others

Raw performance isn’t anything. Real world performance does. How well apps optimize. d2d does a great job at it. So does the verge. Premiere, Resolve, AE, FCP, Also many apps that are being optimized for metal are in their infancy like Blender.
Reactions: pbdnr, Mr.PT, Jonathan Leclerc and 5 others
G

Forget the actual results. The worrisome part for Nvidia is Apple has a chip that is quite good and might overtake them at sometime even though it is not a discrete graphic card. I mean this stuff is built into the chip. Everyone used to laugh at built-in graphics. Not so much anymore.
Reactions: twocents, OldITGeek, Mac47 and 53 others
R

Actually the point whether valid or not is the performance you can get UP TO a certain amount of power usage. For that range the Ultra chip has much more performance. So its more like saying for 0 to 40 an electric car will beat a McLaren, but obviously 40 McLaren can blow it away. Doesn't mean that in "speed restricted" uses an electric car isn't better.

So it is misleading but not inaccurate. Its even titled "Performance vs Power."
Reactions: wwetech, pbdnr, MacCheetah3 and 10 others

Even if it’s half the speed that’s a win.
Reactions: astorre, foliovision, Steve121178 and 57 others
K

TheYayAreaLiving ? said:
Wow! This is crazy. What happened to industry-leading chip?

Yikes! Yeah no kidding. This doesn't look good for the M1 Ultra at all.
Reactions: Mal Blackadder, pbdnr, bilbo--baggins and 10 others

Apple: This is what we need now. We are ready. To the next level, Quadruple! 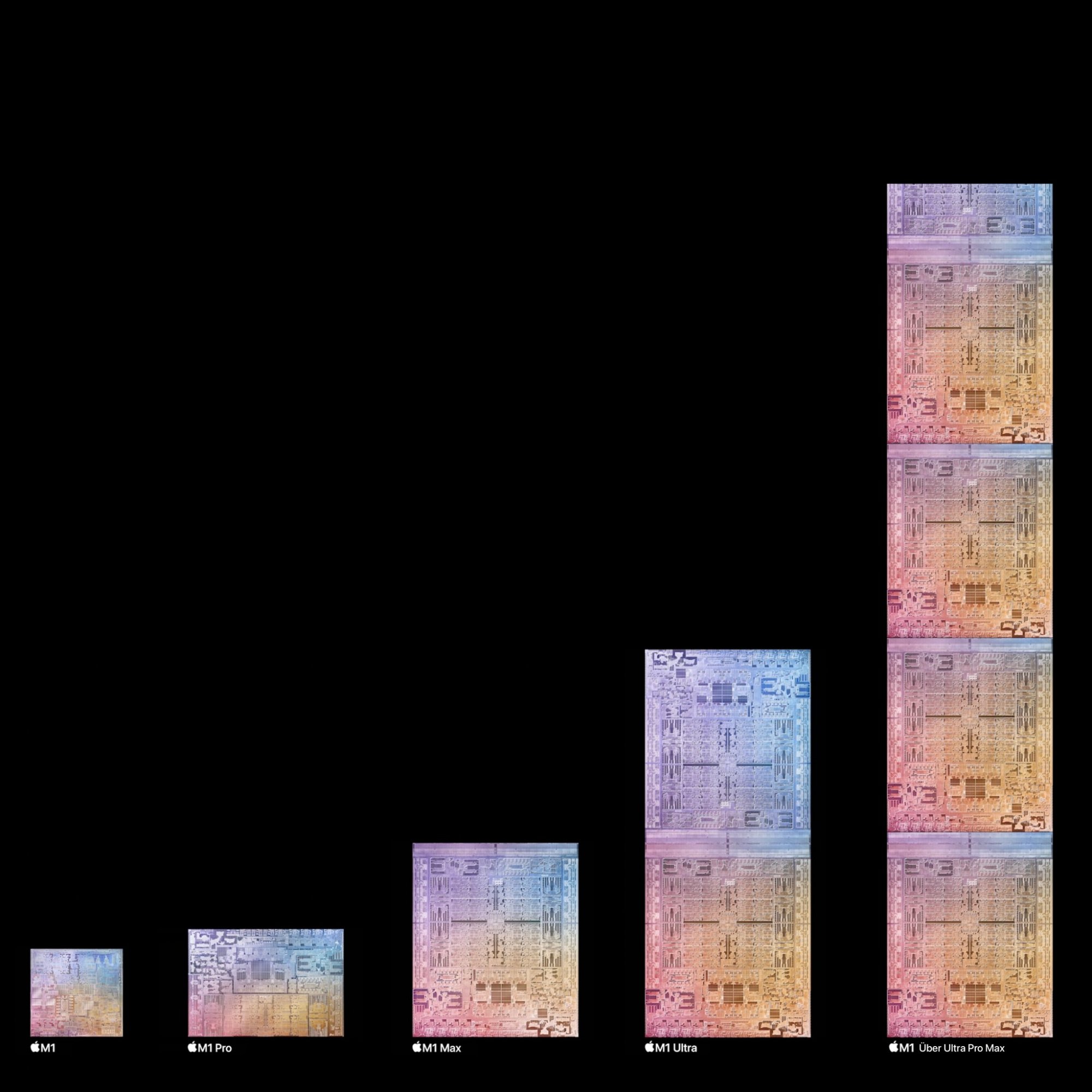