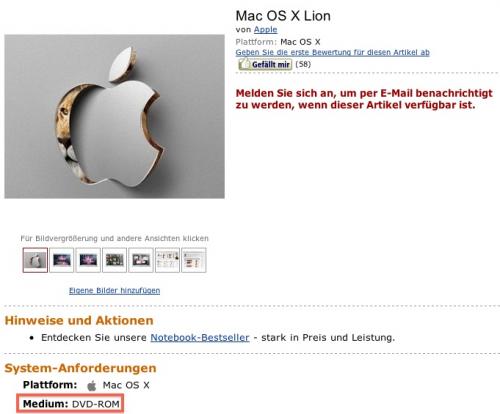 Apple Bitch notes that a new placeholder has appeared on Amazon's German site suggesting that Apple will be distributing Mac OS X Lion on DVD when it is released later this year.

A listing for the latest version of the Mac operating system, OS X 10.7 Lion, which is due for release this summer, has appeared on the German Amazon website. The significance of the listing is that the OS is apparently being offered on DVD, rather than on the USB thumb drive, upon which Apple had begun to offer the Snow Leopard OS with the purchase of the new MacBook Air models last year.
Click to expand...

No price or availability date is given on the listing.

Amazon's site is a rather frequent source for product speculation given the company's tendency to post placeholders based on rumor in advance of official release information, and Amazon's German site seems to be one of the most active of Amazon's regional arms in this regard. Consequently, we hesitate to read too much into this speculation and are posting it on Page 2 primarily for interest and discussion at this time.

The distribution mechanism for Mac OS X Lion is certainly up for discussion given recent developments in Apple's hardware and software offerings. With the redesigned MacBook Air lacking an optical drive and proving to be a popular notebook for consumers, Apple's shift to a small USB drive for backup software on the machine has led to speculation that the company could adopt that method entirely for Mac OS X Lion distribution.

In addition, Apple has been delivering developer seeds of Mac OS X Lion via the company's new Mac App Store, which launched in early January. Consequently, it seems likely that Apple will at least offer the option of Mac OS X Lion as a download purchase through that platform.

Too early to quit dvd altogether

If its up to me to should throw that medium into the wastebin asap.
C

I'm expecting both a retail DVD release as well as a downloadable release. I'll personally be getting the DVD for easier install on multiple machines.
D

Sounds good. If I crash my machine on the way, I'll have this to take care of it. In my opinion, OS's should come on DVD until the time, you can reinstall them from any kind of crashing by booting in as root in the safe mode.
O

maybe Amazon don't have a USB option for that field!

Even with the App Store a new OS will still require an external medium... For availability at least...

Certainly can't be Mac App Store only, because then if you skipped Snow Leopard you'd have to purchase it before you could download Lion.

don't have those Amazon placeholders a pretty bad reliability index?

Anyway ... I think for things like an OS there will always be the need for some kind of external medium (e.g. if you install from scratch - e.g. harddrive died and you need to install a new OS) ... but USB stick would be a nice alternative to DVD (I'm not using my DVD drive for anything and might want to skip it in the next update if there is an option to get a second drive instead of DVD)


DavidLeblond said:
Certainly can't be Mac App Store only, because then if you skipped Snow Leopard you'd have to purchase it before you could download Lion.
Click to expand...

I don't want a boring DVD. I want Lion to come on one of those cool MacBook Air-style memory sticks, only compatible with ThunderBolt.

Alright. Say it was Mac App Store only and I had Leopard. How would I go about purchasing Lion?
O

zin said:
I don't want a boring DVD. I want Lion to come on one of those cool MacBook Air-style memory sticks, only compatible with ThunderBolt.
Click to expand...

Amazing, and then what? Maybe use it twice in your machine's life?

i bet u half the people wouldn't even understand how to install a OS without a physical disc, not everyone is as involved with stuff like that.

Durrr, Macbook Air customers received a USB drive so they wouldn't be forced to get the "optional" optical drive.

If its up to me to should throw that medium into the wastebin asap.
Click to expand...

I agree, but the simple fact is that DVDs are still dirt cheap compared to USB drives. Give it a couple years. DVD is scheduled to be dust in 2015, anyway. Probably sooner if the price of 4 & 8 GB thumb drives become super-cheap.

Fear not: the thumb-drive IS the next media step unless some huge player in the industry pushes for something else.

BluRay will hang on until 2020, or whenever large GB thumb-drives are cheaper than such disks. The moment those chips are manufactured like Skittles, they'll cost nothing and be universal. Goodbye all mechanical garbage, please. (Aside from fans)
T

If its up to me to should throw that medium into the wastebin asap.
Click to expand...

Given the source, I say "triple meh".

Amazon is known to post a lot of wrong things in the past, (iWork '11 anyone?) but this seems pretty legit. I burned my install to a DVD to use it, and it worked just fine. I'd assume that this is the last upgrade on a DVD though. OTA upgrades FTW.

Big deal. I'd be very surprised if it's not offered on DVD - it's surely cheaper and easier than USB drive. I'm sure the USB drive for MacBook Air was simply because that machine has no optical drive. Surely?
S

zin said:
I don't want a boring DVD. I want Lion to come on one of those cool MacBook Air-style memory sticks, only compatible with ThunderBolt.
Click to expand...

Depending on what kind of memory it is that could make for really short installation times.
S

DVD's are cheap, people have DVD drives makes sense to have it available as ONE of the formats. Why do users other than MBA owners need to have it come on a thumb drive?

I hope Apple does the "...go where the puck is going." and provide Lion on a flash drive. I would use it even if I was using a Mac with a DVD drive built-in.

Ommid said:
Amazing, and then what? Maybe use it twice in your machine's life?
Click to expand...