Apple today announced price drops for its Mac Pro lineup ahead of a major revamp coming in the future, dropping the 4-core option and significantly lowering the prices of its new baseline 6-core and 8-core machines.

Apple has also made Mac Pro build-to-order processor and GPU upgrades much more affordable for pro users who need higher-end specs than the base machines provide. 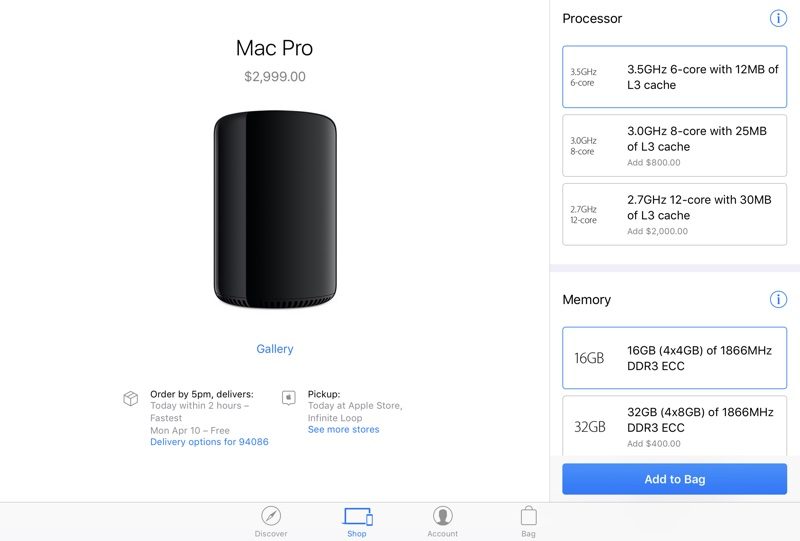 GPU upgrades are also more affordable. With the 6-core machine, upgrading from the stock dual AMD FirePro D500 to the FirePro D700 now costs $200, an upgrade that was previously priced at $600. The GPU upgrade isn't necessary on the new stock 8-core machine, as it ships with the D700s.

The Mac Pro lineup has not gained any refreshed or updated hardware -- all that's changed is configuration and price. The machines continue to use Ivy Bridge E Xeon processors, dual AMD FirePro GPUs, and Thunderbolt 2.

Apple's reconfigured Mac Pros are available starting today from the online Apple Store and Apple retail stores. The 6-core model can be purchased immediately, but the 8-core model is listed as "currently unavailable."

Today's price drops come ahead of a promised overhauled Mac Pro that will be introduced sometime after this year. Apple is working on a high-end high-throughput modular Mac Pro system that will facilitate regular upgrades to meet the needs of Apple's pro user base.

Does anybody know if the SSDs in the Mac Pro pricing refresh are quicker like the ones in the 2016 MBP? I imagine not as there's no 2TB option but I was just hoping for some confirmation either way.
Reactions: centauratlas
Comment

The new design is going to be shaped like a cube...
Reactions: dcslacker, iShater, opeter and 4 others
Comment
A

I'm glad they lowered the prices on flash again, hopefully this influences pricing with other Macs in the future.
Reactions: andrew5494 and aristobrat
Comment
C

Glad I wasn't imagining that the prices on BTO configurations suddenly seemed a lot lower! A positive step forward from Apple until we see the new system in 2018. Hopefully.
Reactions: lostczech
Comment

All of the non-pro users who simply desire a Mac Pro can complain all they want, but this is a significant price reduction, no matter how you look at it. Apple is certainly on the right track, and it was a great move to offer the price reduction in conjunction with the pre-announcement. Shops that need these machines will be happy with this.
Reactions: chrisbru, Chicane-UK, unobtainium and 22 others
Comment
J

The last time Apple released something "new/truly awesome", you guys got the nMP.

Remember when people speculated about the prospect of upgrading the nMP, as new technologies became available?
Reactions: SDRLS and Aldaris
Comment

Better than nothing, but couldn't something this minor have been done earlier?

Too late as people have jumped ship and moved over to PCs or Hackintoshes. The prices are still too high for 5 year old (lousy) hardware.
Reactions: omenatarhuri, JackANSI, Hank Carter and 20 others
Comment

Apple is looking for a REASON to kill the mac.

They have made it obvious that they do not want the mac in their lineups.

By not upgrading it; sales go down; it gives them reason to put the nail in the coffin.

Just get it over already Apple. Everyone is tired of you dragging us along.

Put a bullet in the mac line up already; the current lineup is a disgrace. No upgrades, glued parts, insane prices, you can't even plug your flagship product into a new 3k macbook without a freaking adapter.

I heard that the SSD update was stealth.
Comment
S

Yeah it's just like rape except for the whole consent thing, which is what defines rape
Reactions: chrisbru, pentrix2, RuralJuror and 29 others
Comment

Scottsoapbox said:
Better than nothing, but couldn't something this minor have been done earlier?.
Click to expand...

Im thinking the same... Its just a desperate act as Apple notice that the Pro market is slipping and afraid of what impact it may have. THe lack of updates is nothing short of negligence from Apple. THey could have done this almost yearly with very little effort.

But at least we got some unusal news, which is good. Though apples time frames can be painful for pro users. I wouldnt buy this Mac Pro unless I was absolutely desperate for new hardware. Despite the upgrades and price drops - it's still a useless design that looks worse than any pc box once everything is hooked up.
Reactions: Hank Carter, ventricle, Mr Rogers and 7 others
Comment

Scottsoapbox said:
Better than nothing, but couldn't something this minor have been done earlier?

It's good there is movement but you're very right about this. These are the minimal efforts they should've put in years ago. They still don't understand how the market works it seems. But I'm glad there is movement.
Reactions: nzgeorge, invisiblecube and Aldaris
Comment
N

bladerunner2000 said:
Too late as people have jumped ship and moved over to PCs or Hackintoshes.
Click to expand...

No true pro is using a Hackintosh. Tinkerers and hobbiests, sure. Pros? Not a chance.
Reactions: Hank Carter, jeffirl, nzgeorge and 19 others
Comment

This is so great! But it's especially great knowing that Apple will release their modular/customizable Mac Pro in 2018! Thanks for being transparent, honest and forthcoming with us, Apple!
Reactions: Applebot1, Three141, jblagden and 4 others
Comment

Didn't it used to ship with a mouse and keyboard? 3K for a machine and no mouse or keyboard, what a joke.
Reactions: JackANSI
Comment

jrlcopy said:
Didn't it used to ship with a mouse and keyboard? 3K for a machine and no mouse or keyboard, what a joke.
Click to expand...

It's a server, not a workstation.
Reactions: Klaatu63 and poematik13
Comment

I wonder when and how this will affect the refurbs?
Reactions: Aldaris
Comment
S

Fall Under Cerulean Kites said:
No true pro is using a Hackintosh. Tinkerers and hobbiests, sure. Pros? Not a chance.
Click to expand...

Why? Because it doesn't have the Apple logo on it?
Reactions: JackANSI, rGiskard, pentrix2 and 4 others
Comment

The "update" and "price drops" are a joke.

I guess this "magical big re-thinking" just means "2016 hardware" i doubt all these 'todays standards' will be in the future mac pro.
Reactions: pentrix2, nzgeorge, tubeexperience and 2 others
Comment

Apple should just aknowledge that they have almost lost the pro market! Many are - have already - jumping ship ans moving to PC mean&lean machines. The upgrades for the trash can is a big laugh.