A bug in macOS High Sierra is causing users to receive iMessages and SMS texts on Macs and other iCloud-connected devices long after they were originally sent, according to reports that have been gradually building up over the last week or so.

First spotted by AppleInsider, a growing number of complaints on Apple's support forums detail the issue, which is affecting Mac owners with iPads, iPhones, and Apple Watches. The issue has also been picked up on MacRumors' forums, while at least one MacRumors staff member has experienced the same problem. 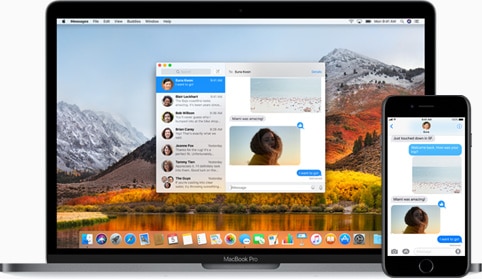 On updating to macOS High Sierra, some users report that iMessages only appear on their Mac after a long delay compared to their iPads and iPhones. Others have noticed that notifications are not coming through at all on other devices connected to the same iCloud account.

Some contributors to Apple's support forum and the MacRumors forum have suggested a couple of temporary fixes, including disabling and re-enabling messages, or sending messages on a Mac instead of an iOS device. Recent beta versions of macOS High Sierra don't appear to solve the problem, making reverting to macOS Sierra the only persistent workaround. Meanwhile, a community bug report has been created to alert Apple to the issue.

There's some speculation that the bug could be related to changes to the way iMessages function behind the scenes. Apple is working to bring iCloud syncing to iMessage in macOS High Sierra and iOS 11, so that deleting a message on one device removes it from all devices linked to the same account, for example. The advertised feature was pulled when the two operating systems were launched, but Apple hopes to introduce it later this fall.

Yep, I'm experiencing this problem. Glad I'm not the only one!
Reactions: 26139, Villarrealadrian, Sdtrent and 2 others
N

Ditto. Frustrating to have to keep re-enabling my Apple ID for iMessage. Although it seems to be working better the past few days.
Reactions: Sdtrent

Is macOS becoming Windows while Windows is trying to become macOS?
Reactions: melendezest, willgreene99, T'hain Esh Kelch and 3 others
S

Been experiencing the same thing since High Sierra came out on 9/25. Also seeing a number of issues with FaceTime on High Sierra.
C

Think its another reason why Apple are pushing updates and new features out without checking and bug bashing. Its like Microsoft. There will be another 'security update for your apple device' along soon!
Reactions: willgreene99, macfacts and burgman
A

Happened since upgrading to High Sierra. Still does it. Very annoying!
Reactions: Sdtrent

Thanks for confirming. I and everyone I correspond with have this. It takes 20 to 40 mins for messages to come through. It’s like we’re back in the 1990s again. Photos also syncing very slowly or not at all. So seems to be a retrieval or backend problem.
Reactions: NY Guitarist, Sdtrent and Mr. Donahue

Yes I too getting the delays on my 2010 macbook.

It's annoying as use imessage while at work to talk to fiancee as no phone reception at work.

I’ve done many tests and have tried many combinations of turning on and off ID or Cloud
Reactions: Sdtrent

Same here, I'm also facing problems with photos, notes and contacts sync ever since upgrading to High Sierra. Hopefully 10.13.1 will fix this and I can't wait for iMessage in the cloud too

Confirms what I've been experiencing as well
Hope they get it sorted soon
Reactions: Mr. Donahue
N

That transition happened with windows 10.
Reactions: Molly’s Mom, willgreene99, Avieshek and 1 other person
B

i've had this problem forever. with every bloody version of macos. some days it's worse than others. but it's generally flakey.
Reactions: Mr. Donahue, xpxp2002, Wackery and 1 other person

I'm on Virgin UK. Their slowness is unbeatable. Not noticed any extra lag with HS.

Sent this day, October 18th in the year of our Lord 1817.
Reactions: Villarrealadrian, BigMcGuire and gixxerfool

There are plenty of problems with every big feature update of Windows 10. So no.

It's actually worse than Windows 7, because W7 didn't really change and just got security and bug fixes.

They are defnitely heading into the same direction though. But i'm not sure it's a good one.
Last edited: Oct 18, 2017
B

I’m quite aware that bugs exist and no software is perfect, but I sure am glad that the professional software I rely on for my job takes 1-3 months to certify for Apple’s new operating system that comes out every year. That means that I cannot switch over to High Sierra until at least November or December. And that has worked out really well for me since nowadays all of Apple’s operating systems essentially are in beta mode for the first couple of months after public release.

Don’t worry folks, I love Apple, but unfortunately, over the last 5 years they have changed. They still make great products, but they have been drifting more and more away from producing software that “just works”. All of Apple’s operating systems (mac or mobile) are riddled with problems and it takes them the better part of 6 to 10 months to get everything running smoothly and then the cycle repeats itself all over again since they feel compelled to release something new every single year. It’s sad really. And it’s not the same insanely great company we used to know.
Reactions: monokakata, melendezest, willgreene99 and 2 others

faded_glory said:
I'm on Virgin UK. Their slowness is unbeatable. Not noticed any extra lag with HS.

Intercontinental Carrier-pigeon delivery is the wave of the future, by Jove!
Last edited: Oct 18, 2017
Reactions: BigMcGuire

I’ve had this issue since at least El Capitan. Not sure why people are just noticing now.
Reactions: Mr. Donahue

“Continuity “ and handoff has never been a smooth experience for me. Since it’s anouncsmenf with what? iOS 10 and Yosemite? I’ve been waiting for the experience to improve. It’s not there yet. I’m still waiting. I don’t know if they’ll ever figure it out. That Craig has great ideas but just can’t seem to make it happen.

If you're seeing this issue, please report it to Apple. They don't fix a problem if they don't have significant data to show it's impacting many.

Don't just assume someone else will vote for you. That's how we end up with political officials we don't like.

Yep. Experiencing this also, along with the cursor not responding to trackpad input off and on throughout the day on my mid-2014 13" MBP.