A bug report submitted on Open Radar this week has revealed a security flaw in the current version of macOS High Sierra that allows the App Store menu in System Preferences to be unlocked with any password. 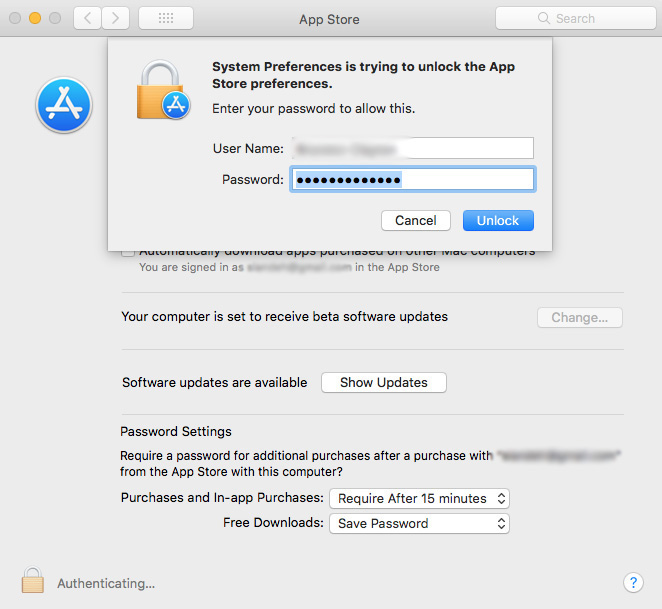 MacRumors is able to reproduce the issue on macOS High Sierra version 10.13.2, the latest public release of the operating system, on an administrator-level account by following these steps:

As mentioned in the radar, we can confirm that the App Store preferences login prompt does not accept an incorrect password with a non-administrator account, meaning there is no behaviour change for standard user accounts.

We also weren't able to bypass any other System Preferences login prompts with an incorrect password, with any type of account, so more sensitive settings such as Users & Groups and Security & Privacy are not exposed by this bug.

Apple has fixed the bug in the latest beta of macOS 10.13.3, which currently remains in testing and will likely be released at some point this month. The bug doesn't exist in macOS Sierra version 10.12.6 or earlier.

On the current macOS 10.13.2, the bug gives anyone with physical, administrator-level access to a Mac the ability to disable settings related to automatically installing macOS software, security, and app updates.

This is the second password-related bug to affect macOS High Sierra in as many months, following a major security vulnerability that enabled access to the root superuser account with a blank password on macOS High Sierra version 10.13.1 that Apple fixed with a supplemental security update.

Following the root password vulnerability, Apple apologized in a statement and added that it was "auditing its development processes to help prevent this from happening again," so this is a rather embarrassing mishap.

We greatly regret this error and we apologize to all Mac users, both for releasing with this vulnerability and for the concern it has caused. Our customers deserve better. We are auditing our development processes to help prevent this from happening again.
Click to expand...

It's worth noting that the App Store preferences are unlocked by default on administrator accounts, and given the settings in this menu aren't overly sensitive, this bug is not nearly as serious as the earlier root vulnerability.

Apple will likely want to fix this bug sooner rather than later, so it's possible we'll see a similar supplemental update released at some point, or perhaps it will fast track the release of macOS High Sierra version 10.13.3. Apple did not immediately respond to our request for comment on this matter.

In the meantime, if you keep your App Store preferences behind lock, you'll want to be more diligent in ensuring that you log out of your administrator account when you are away from your Mac. Alternatively, until macOS 10.13.3 is released, users can use a standard account rather than an administrator one.

While this bug isn't as dangerous as the root password vulnerability, being able to bypass a login prompt with any password is something that obviously shouldn't be possible and is an embarrassing oversight for Apple.

THIS WILL BE THE END OF THE WORLD!

WHAT HAS HAPPENED TO APPLE LATELY!? IF SOMEONE HAD ACCESS TO MY MACHINE THEY COULD CHANGE A COUPLE FAIRLY MEANINGLESS APP STORE PREFERENCES!!!!
Reactions: travisjaymoore, flszen, scrapesleon and 39 others
Comment

This release is really a mess. Tim Cook QC
Reactions: flowave, Marcode, freezelighter and 19 others
Comment

I smell another negative Apple news story.. The Verge is gonna love this.
Reactions: Marcode, freezelighter, KingOfStuff and 4 others
Comment

Unreal, maybe focus less on retail store trees and more on stuff like this
Reactions: flowave, brandonboo20, Alfredo_Delgado and 30 others
Comment

Wow, Apple have become a real mess. They tout themselves as valuing user privacy and security, yet they seem to be the ones handing out the keys themselves!
Last edited: Jan 10, 2018
Reactions: flowave, Marcode, imageWIS and 9 others
Comment

Don't worry guys. I'm on the phone to my lawyer right now. Who wants in on the Class Action goodness?
Reactions: matjamca, imageWIS, pat500000 and 13 others
Comment

This isn't that major an exposure as a user with an admin account would already have access to this setting with the proper credentials. It's also fixed in the 10.13.3 betas. The preference is also unlocked by default when System Preferences is first opened, so no password at all is needed, by default.
Reactions: bobob, mwined, nortonandreev and 17 others
Comment

thogin said:
I smell another negative Apple news story.. The Verge is gonna love this.
Click to expand...

What kind of positive news can come from this?
Reactions: nortonandreev, TheTissot11, -BigMac- and 14 others
Comment

It's all about fingerprints and face recognition now, remember. Passwords are so yesterday. So, I don't see the problem here. /s
Reactions: iop, Alfredo_Delgado, formerpc and 7 others
Comment

MacRumors said:
The implications of this security vulnerability are rather serious. Anyone with physical or remote access to your Mac could unlock the App Store preferences and enable or disable settings to automatically install macOS updates, app updates, system data files, and, ironically, even security updates.
Click to expand...

Am I the only one thinking that this issue is not that serious?

Yes, it does make Apple look completely stupid failing to implement a working password request, but it's not dangerous.
Reactions: FeBo, cubedweller, ZZ9pluralZalpha and 7 others
Comment

techno-Zen said:
Unreal, maybe focus less on retail store trees and more on stuff like this
Click to expand...

I'm not sure how I feel about having the interior decorators of Apple retail working on operating system security...
Reactions: Gorms, Irock619, formerpc and 14 others
Comment

A tad bit disturbing because it's so blatant and Apple has stated security is a feature of its products. These type of basic omissions belie its claims. Feels like Mac OS is becoming Windows with all these security patch updates. Maybe Apple needs to slow down here a bit and get back to basics.
Last edited: Jan 10, 2018
Reactions: flowave, Alfredo_Delgado, realeric and 27 others
Comment

One more reason I chose to leave macOS in 2017. iOS is a much better platform for me moving forward. Has everything I need and a bright future ahead. We need a ground up rework of macOS - based on iOS.
Reactions: pat500000, ThaRuler, riverfreak and 2 others
Comment

Wowereit said:
Am I the only one thinking that this issue is not that serious?
Click to expand...

No you're not. This just isn't a major issue. My concern is that it's a further indicator of Apple's failure to do proper QA on security related issues in the recent past.
Reactions: flowave, Alfredo_Delgado, schneeland and 27 others
Comment
M

Not that big of a deal since it only works on an admin account - if someone malicious already has access to your admin account's desktop, you already have big problems.
Reactions: -BigMac-, i.mac, TimSHB and 8 others
Comment
S

Is there anything good about High Sierra?
Reactions: flowave, timme, idunn and 12 others
Comment

thogin said:
I smell another negative Apple news story.. The Verge is gonna love this.
Click to expand...

I can see the sensational headline now. And all the android fanboys having brain aneurysms in the comments.
Reactions: FeBo
Comment

Doubling down on secrecy my a**!
Reactions: -BigMac- and ArchAndroid
Comment
J

In the "good ol' days" of Apple I was always running the latest macOS. For the past several years I've been staying one release behind (I just upgraded to Sierra a couple of weeks ago).
Reactions: cammonro, Alfredo_Delgado, Marcode and 8 others
Comment
E