you can i gess.

simply you can do anything you want it's just how fast you want it done.

you do know how big 4K files are, you wont get much on a ssd.

do you know anything about video editing?
Reactions: JimmyPainter and Parsuto

Thanks man, I'm not a video of the Dolomiti Superski, but an amateur evolved so fast but I do not care to be able to work well, even if it takes more time to render it does not matter, FCPX use and premiere CS6.

iv edited 1080p on a 3.1 worked fine a tad slow but fine.
depends a lot on your workflow, if you read up you can aim your workflow for performance.

finalcut X on the other hand will work faster on a ATI card, your GTX960 is a odd option.
id look at used cards there cheaper and CS6 is not relay to GPU dependent unless doing tasks that relay use the GPU then if you are the GTX960 i think is not an ideal card.

well if you are using adobe you can use your copy on both windows or mac, for the same price as a macpro you can make a faster windows box. worth thinking about.
Reactions: Parsuto

Of course, an option (at least with FCP X) is to edit using proxy material in lowly HD resolution, and only go back to the 4K media for the final render of your project.
Reactions: stevekr, Silencio and Parsuto

orph said:
finalcut X on the other hand will work faster on a ATI card, your GTX960 is a odd option.
Click to expand...

ah i gess time has moved on, still the 680/770 are cheaper than the 960 wont require the nvidia graphics driver and have more guarantee of long turn support as the drivers are in osx rather than dependent on nvidia
+ openCL/cuda wants a fast bus also the 570/580 i think might be worth looking at as mentioned in the nvidia sticky
[doublepost=1462397118][/doublepost]ps also the gpu dose only make a few things faster most tasks are pure cpu speed dependent if you look on line you can see a lot of the time a gpu make's little to no speed change.

tho one of the few times it relay helps is downsizing from say 4K to 1080P ^^
at least in CS6 pp, AE is much more of a nom nom i eat your pc beast.
AE is the only app iv seen on the simple work i do eat all my ram.
Reactions: Parsuto 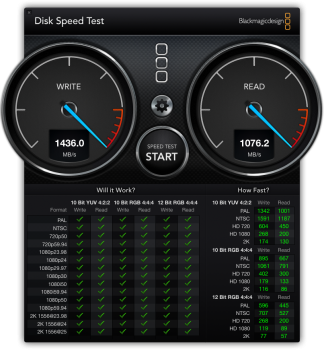 This is done in AVID 8.4.4 If you do it in Premiere try the both ways
Using the CUDA cores and the Ram 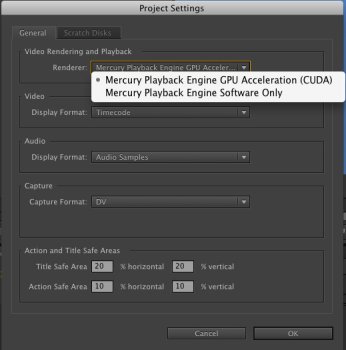 every thing i read about adobe and there apps says the GPU does very little once you have a GTX650 or faster, so 960 is fine just massive overkill and wont give much of a boost. CPU is still the most important thing, most the time.
https://www.pugetsystems.com/labs/articles/Adobe-Premiere-Pro-CS6-GPU-Acceleration-162/
list of gpu effects
https://helpx.adobe.com/premiere-pro/using/effects.html#gpu_accelerated_effects

disk speed is important but depends on what you do. on my macpro 3.1 i had SSD boot drive WD Black media drive WD black scratch drive and was always CPU locked but i was working on 1080P video in h264 or prorez 422/422 LT.
but if your doing multi cam you will need a faster drive.

been reading the adobe forums and redit seems AE is not likes CPU way over GPU so i was wrong.

some more links to look at
PP cc cpu use https://www.pugetsystems.com/labs/articles/Adobe-Premiere-Pro-CC-Multi-Core-Performance-698/

top end GPU's https://www.pugetsystems.com/labs/articles/Adobe-Premiere-Pro-CC-Professional-GPU-Acceleration-502/
PP cc notice at 4K it dose matter but thats on a much much faster cpu so id gess you will get cpu problems way before GPU problems
Last edited: May 5, 2016
Reactions: Parsuto

I've edited 4k video on my 2006 mac pro converted it to 1080p and burned it on blu ray its time consuming but it worked well.
Reactions: JimmyPainter and Parsuto

but your mac pro 2006 model?
dual core 8 gb ram?
or have you changed and upgraded?

so I understand that a mac Pro 2006 four cores and an 8 core mac pro 2008 work the same way files 4k no problems, only that the 8-core Mac Pro 2008 will perform the proper render more quickly?

then if someone like me in no hurry to render could also work well with a Mac Pro 2006 or 2007 that eventually cost less than one in 2008, am I right?
thank you
M

This thread is littered with misinformation. Please do not pay any attention to what ^ said.

First off, the 1,1/2,1/3,1 are not 'almost identical'. Whatsoever. The 1,1 and 2,1 are close and considered the fairly obsolete range; but the 3,1 is a significant upgrade. If you have the option, never go lower than a 3,1. There is upgraded architecture, faster bus, faster memory, significant pci upgrades, 64 bit kernel support, etc. And the 2.8ghz 3,1 IS faster than the 2,1 3ghz. The extra ghz do NOT make the 2,1 faster. The Harpertown vs Clovertown processors are a no brainer.

And for editing 4k video - it HIGHLY depends on the video you're going to be editing. Is it gopro 4k footage? Cell phone 4k? Or is it 4:4:4 4k shot on a red, or blackmagic, or something like the a7s with a shogun? You can edit gopro 4k on a somewhat basic 3,1 setup easily, but if you're editing pro-sumer to pro-level 4k footage, it will take some upgrades on any Mac Pro. You will need quick drives to access the footage; if the bitrate is significant, you'll probably want an ssd raid setup. That alone will make the 3,1 handle it fairly okay. A decent GPU helps as well. From your posts, it seems like you mainly just want to be able to cut it without huge hickups; as render time doesn't matter to you. Your best/cheapest solution might be a 3,1 with a 240gb SSD in the PCI slot, and an additional 7200rpm drive. Assuming you do mostly short projects; the 240gb should be just enough; and when you're done, dump it all onto the 7200rpm drive.

My personal recommendation would be to go with a 4,1 or 5,1 though; if that's an option.
Last edited: May 5, 2016
Reactions: Chung123, lewis_cooper, JimmyPainter and 3 others

I have to edit the files in 4K Lumix GH4 with FCPX but not just cut and paste but also some transition or slight color correction, thank you.
Reactions: JimmyPainter

if you have adobe cs6 id relay think about making a windows box it'll cost the same as buying and upgrading a macpro and shude run faster.

if your editing in h264 it will be slow but work, if your transcode to a better file like prores422 LT it will be easier on the system. if your only doing a single track with color corrections it's not going to be to intensive on a HD so something like a WD black will work fine as a meida drive.
(do try the h264 to see if it works at a speed your happy with)

you do have the problem that your buying a computer that is 8 years old so if it fails it might be a problem to fix.
but my 3.1 still works fine so maybe thats ok (the power supply is a tad hot but seems ok)

also do you already have a mac? even my sisters macbook pro 13" 2012 with an i3 cpu is fast
Reactions: JimmyPainter and Parsuto
M

A lot of people get confused about processors and video editing; the editing itself does not require significant processing power. Most modern processors can handle it fine; it's being able to play it back and read the files quick enough that is usually the biggest bottleneck. The only thing you may run into is some slow downs with color correction; but assuming it's very minor, you'll be fine. Where you will notice a huge difference in processing power is when it comes to rendering out.
Reactions: JimmyPainter and Parsuto

If you are not able to play/edit 4K on your current 3,1 setup do the following
1. Try in 1/2 or lower resolution.
2. Import or AMA the footage depending on your app
3. Transcode to something your "system" can handle
4. Edit
5. Relink to 4K files
6. Export 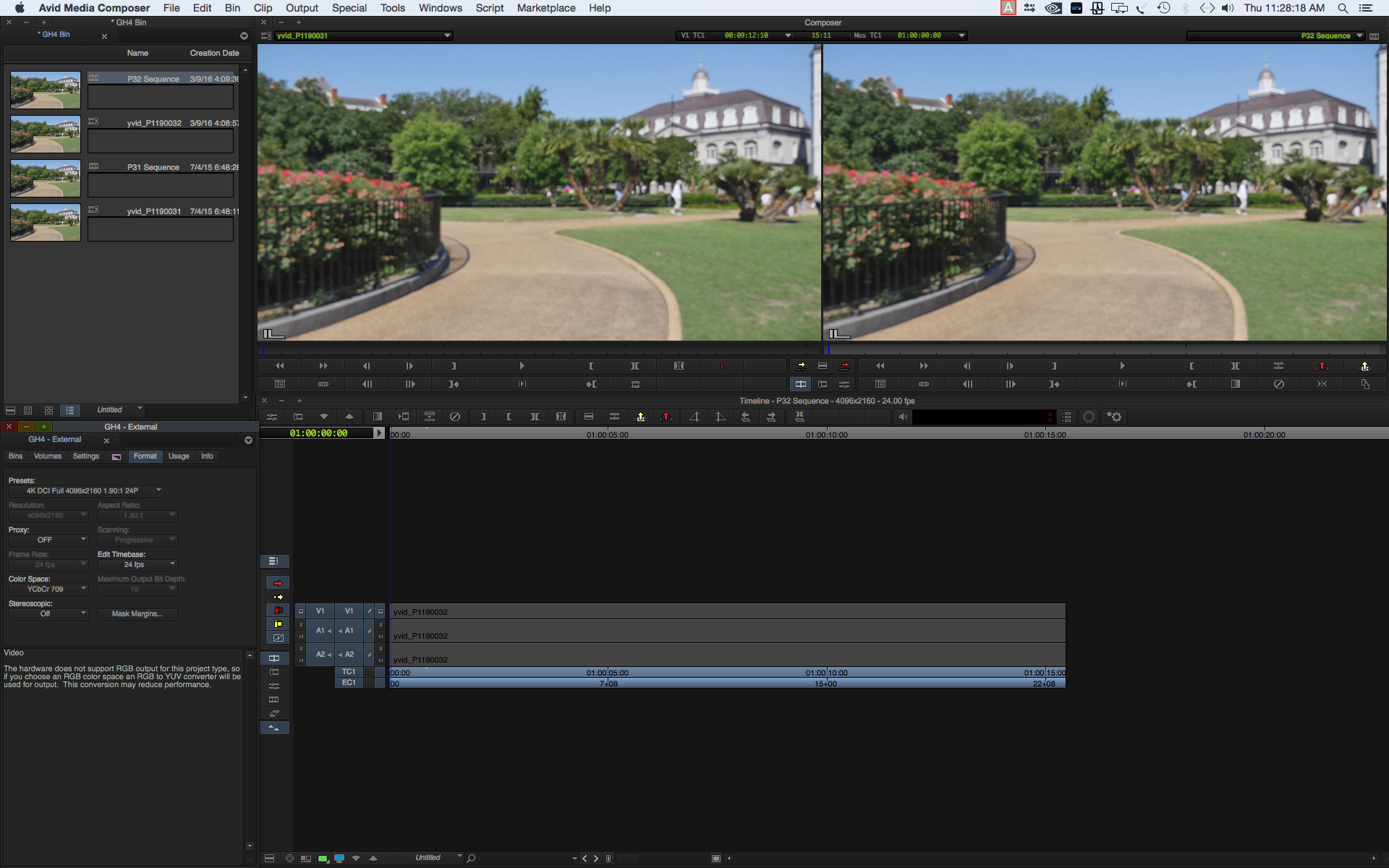 Parsuto said:
but your mac pro 2006 model?
dual core 8 gb ram?
or have you changed and upgraded?

Still 3 gig 5160 ATI4870 4 hard drives Yosemite and Mavericks on 2 drives 10.6 and windows7 on the other 2 and 16 gig of ram nothing special
Reactions: JimmyPainter and Parsuto

a friend of mine who has a Hackintosh with I7 4790K says the difference will not be much.
thank you
Reactions: JimmyPainter

orph said:
iv edited 1080p on a 3.1 worked fine a tad slow but fine.
depends a lot on your workflow, if you read up you can aim your workflow for performance.

finalcut X on the other hand will work faster on a ATI card, your GTX960 is a odd option.
id look at used cards there cheaper and CS6 is not relay to GPU dependent unless doing tasks that relay use the GPU then if you are the GTX960 i think is not an ideal card.

well if you are using adobe you can use your copy on both windows or mac, for the same price as a macpro you can make a faster windows box. worth thinking about.
Click to expand...

I have a 2008 Mac Pro 3,1 with a 7970 inside and it rocks. The fact is like others have said here it depends on what kind of 4k and how fast do you want to go on a budget. If Money is NO Object thats different. The Barefeats website shows plenty of options to get well over a Gig/sec Transfer rate off of the PCIe slots. Raid on up to 4 7200 Drives is another good solution as the Most critical thing to consider when dealing with ANY Giant files. Next is Ram. Again ... the Budget is the key. Pack in there as much as you can afford 16Gig min. Then for Video ... Cheap used AMD 7970 or 280X Cards are best bang for buck. Then there is the Rendering. I suggest @ $500 a pop, stack up as many Mac Mini's as you can afford for render Farm just like the Big Dogs do and you can move those along with you to any machine you can afford in the future. Mac Pro 4,1 or 5,1 is preferred but a 3,1 is usually very cheap GREAT machine. My 3,1 w/ 10 gig ram, 8TB of 7200 Storage, and my 7970 is a $500 dream.
[doublepost=1462544631][/doublepost]

Parsuto said:
thank you all

a friend of mine who has a Hackintosh with I7 4790K says the difference will not be much.
thank you
Click to expand...

Thanks for your advice, but because hackintosh is not good?
they say that they are very powerful and reliable if assembled with the right components.

Parsuto said:
Thanks for your advice, but because hackintosh is not good?
they say that they are very powerful and reliable if assembled with the right components.

Well, if you want to explore using a hackintosh, I recommend you look at what others have done. It's not a walk in the park, but it isn't rocket science any more. However, I have both a 2008 Mac Pro (3,1) with a flashed Sapphire 7950 and a 2010 Mac Pro (5,1) with a flashed PC Gigabyte R9 280x, and they just work - no problems with sleep/wake-up and OS X updates. Hackintosh users are (generally) gamers, dual booting Windoze & OS X, but you will find prosumers using them as well. In my case, if I am doing critical work, I'm using my Mac Pros.
Reactions: Parsuto